Because of the new architecture, the E5 series will use an all new platform (codenamed Romley) utilizing socket 2011 which should improve overall system performance in many areas. The naming scheme has also been adjusted due to the changes to the CPU architecture. See the image below for Intel's graphic showing the new naming convention: 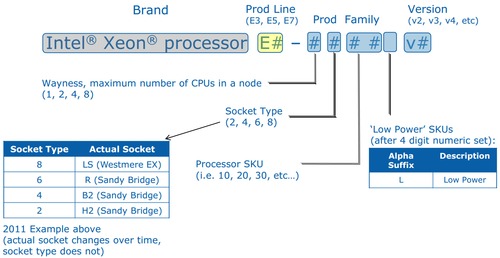 Most of this graphic is fairly self-explanatory except for the Socket Type (the second number in the Product Family string). An easier way to follow these socket types is to list them in terms of the LGA type:

Note that this only applies at the time of this article and a short period after. Even though the R (Sandy Bridge) socket currently uses LGA 2011, that does not mean that Intel will not use a different or new socket in the future. For at least the first half of 2012, however, this should be an accurate way to think of the socket associations.

At launch, Intel is releasing a very wide variety of products as you can see below. Finding just the right CPU for a given application will be difficult for many due to the wide variety, but it also means that there should be a CPU perfectly suited for nearly any application. The offerings range from low frequency, four core budget CPUs to high frequency, six core CPUs up to medium frequency, eight core CPUs.


As you can see, the number of options available is almost overwhelming. The available frequencies range from a modest 1.8Ghz all the way up to 3.6Ghz. The number of cores vary from 2 to 8, with the amount of L3 cache varying roughly in line with the core count between 5MB and 20MB total. This chart is great for comparing the new CPUs against other CPUs in their product line, but it does not give us any idea of the performance advantages over the previous generation. For that, let's take a look at the detailed features of the E5 series versus the previous 5600 series of Xeon processors.

Below is a quick breakdown of the features of the E5 series of processor versus the previous 5600 series:


As you can see, there are improvements nearly across the board with the E5 series. The number of cores has increased to eight and with the new Turbo Boost 2.0, the turbo frequencies are greater than on the 5600 series. The amount of L2 cache per core has not increased, but the total possible L3 cache has increased from 12MB to 20MB.

The increased QPI link speed means that the CPU will be able to communicate with the rest of the system much faster. And while the process technology for manufacturing has not improved, the E5 series will use the new socket 2011 which allows for more contact points between the CPU and the motherboard. Finally, the increase memory support will allow more RAM operating at faster speeds to be used which can also result in an overall system performance boost.

Alongside the new E5 Xeon processors, Intel is also launching a corresponding platform codenamed Romley. Pictured below is a comparison between the previous generation 5500/5600 platform and the new Romley platform.

As you can see from the graphic, the move to the new Romley platform brings about quite a few changes. One of the largest changes is that the PCIe lanes are now controlled directly from the CPU and do not pass through the chipset. The chipset on the Xeon 5500/5600 platform has always run very hot, often requiring either a high airflow chassis or dedicated cooling to keep it at a safe temperature. This one change alone will help reduce the temperature of the chipset and make it much easier to cool properly. For an example of the difference, check out the temperature section of our Asus Z9PE-DB WS qualification article in which we look at the heat of a Romley Chipset compared to an Intel 5520 chipset. In addition to the thermal advantages, the change of how the PCIe lanes are controlled will also make the communication between the CPU and the PCIe lanes much faster and more efficient resulting in increased system performance.

Since the PCIe lanes are controlled by the CPU now, the total number of PCIe lanes available now depends on the number of CPUs being used. Each CPU can now handle 40 PCIe 3.0 lanes versus the previous generation's 36 PCIe 2.0 lane total. So a single socket Romley system will provide 40 PCIe lanes, while a dual socket system can provide 80 PCIe lanes. The communication path between dual CPUs has also been increased with dual QPI links now available rather than just a single link which results in an 1.6GT/s increase in data transfer speeds between the CPUs. 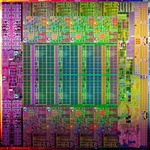 After reviewing all the changes and features of the Xeon E5 series of CPU and the corresponding Romley platform, it's clear that there will be a very noticeable performance improvement with this new line. The previous Westmere-EP series of Xeons are going end of life, but even if they were not, there would be absolutely no reason not to update our product line to the E5 series.

Due to the huge number of E5 processors available, we will only actively list the CPUs that meet the majority of our customer's needs. If there is a specific CPU you are looking for and we do not list it on our product pages, we encourage you to contact our Puget Systems team at sales@pugetsystems.com to find out if it is available or if another CPU would be better suited for your needs.