Every computer needs a power source. Laptops have internal batteries and external charging bricks, but desktop computers use internal power supplies that convert standard alternating current from the wall into direct current which can be used to run the various parts of the computer. As such, power supplies are a critical piece of hardware in modern computers, but there are some aspects of them which aren't well known or understood. This article will explain some of the less known aspects of power supplies, such as what wattage and efficiency ratings really mean, and what other factors you should consider when selecting a power supply for your next computer.

The most obvious trait of a power supply is its wattage rating, which is often incorporated into the model name. For example, the unit pictured above is the Corsair HX850W; it is in their HX series, and rated for 850 watts. However, the exact meaning of that rating isn't quite as obvious: is it the amount of power it draws from the wall all the time, or the maximum it can draw, or some mysterious number pulled from the ether? The answer is none of the above: it is, in fact, the maximum amount of power the supply can continuously provide to the internal hardware in the computer. Short bursts of higher power can be handled, at least by good quality power supplies, but it isn't good to count on that under normal operation.

Different components inside a computer run off a variety of voltages: most commonly 12V, 5V, and 3.3V. A power supply has individual ratings for each of those levels - as seen in the image to the left. Because of that, the total wattage a power supply can output is limited in part by those separate maximums. They can also be an issue on their own, in rare situations, if a system has an abundance of parts which all need a single voltage.

This leads to the first recommendation for picking a power supply: you want one which is capable of supplying more power than your internal components will need to draw; rather obvious, it is true, but worth stating for the record. Depending on the exact hardware being used you may also need to make sure that none of the individual voltage rails will be overwhelmed, but that is usually only a concern on very high-end systems.

In addition to maximum wattage and voltage rails, efficiency is another important aspect of today's power supplies. Efficiency in this sense refers to how much of the power drawn from the wall is turned into usable energy inside the computer. For example, if a power supply is providing 720 watts to the system and operates at 80% efficiency then it will be drawing 900W from the wall (900W x 80% = 720W). The same situation with a 90% efficient model would result in only 800W being drawn from the wall (800W x 90% = 720W). That is an extremely high power draw example, but it highlights the effect that this attribute can have: 100W lower draw will add up substantially if the system is used a lot, potentially saving a lot of money over the life of the computer.

To encourage use of high efficiency power supplies, and help ensure fair comparisons between models with different efficiency, the 80 PLUS initiative was started. It offers the option for manufacturers to have their power supplies certified by a third party, and rated on a scale based on efficiency; power supplies that have been through this process are listed on their website. The ratings for desktop computer power supplies are as follows:

As can been seen in that chart, most power supplies offer their highest efficiency when providing an amount of power in the middle of what they are able to handle. As you go to the farthest ends of a given power supply's wattage range efficiency drops off, sometimes noticeably. With that in mind, it is best to aim for a power supply which is not only capable of handling the maximum draw of the combined hardware in your computer, but one which exceeds that amount enough that to help maintain near-maximum efficiency even under heavy workloads. The inverse is also true: you don't want a power supply which will drop too far below its maximum efficiency when the system is idling... though that is less important than higher load levels, because efficiency matters less the lower the power draw is.

The Impact of Efficiency

To demonstrate the effect that an efficient power supply can have I'll take the example I used earlier of a system needing 720W of internal power. That is what a high-end gaming system might draw under heavy use, so let's imagine I had such a system and I spent an average of four hours a day playing games on it (I'm ignoring other usage to keep this simple). That translates to about 60 hours a month, and with the difference between the 80% and 90% efficient power supplies being amounting to 100W that would give me 12,000 watt-hours, or 12KWH, higher electricity usage per month.

According to my last bill, a KWH where I live costs me 10.4 cents, so by having the more efficient of those units I'd be saving about a $1.25 per month. That may not sound like much, but that is $15 a year - and $60 if I used the system in that fashion for a period of four years (a reasonable life for a hard-core gaming system). That is also a relatively conservative estimate in that I'm sure some parts of the U.S. have higher energy costs than here in the Pacific Northwest, where hydro-electric dams are plentiful.

As you can see, efficiency has the potential to save a lot of money in the right circumstances. Systems that are going to be running 24/7, like servers and home theater systems, can show even greater returns on investment. On the flip side, though, high efficiency models tend to also cost more - so, like most decisions on computer hardware, it is a balancing act.

Other Considerations when Choosing a Power Supply

The main focus of this article is to help folks understand wattage and efficiency enough to make an educated decision when purchasing a computer, but there are other considerations as well:

Reliability / Quality - The power supply is one of the few items in a computer that has the potential to damage other components if it fails. It is also one of the least glamorous, as it doesn't impact performance - so long as it is working - so some folks don't pay attention to the quality of the model they get in a computer. That can be a fatal flaw, though: if the power supply fails then the system won't work until it is replaced, and as alluded to above they can sometimes die in spectacular ways, taking other parts of the computer with them. Looking at brand names and reading reviews can certainly help make a good decision, and here at Puget Systems we keep records of all part failures we encounter or customers report to us so that we can make sure we only sell reliable parts. 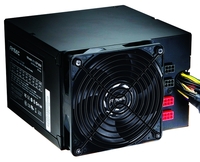 Cooling / Noise Level - Almost all power supplies are actively cooled, meaning they have a fan (or sometimes two). The size and type of fan used can affect how much noise the power supply makes, and the way the power supply is laid out and where the fan is located determine how well the unit is cooled. A poorly-placed fan can mean less airflow to critical parts inside the power supply, meaning the fan has to spin even faster - and louder - to cool things effectively. Efficiency also comes into play here: when electricity from the wall isn't turned into usable power in the computer it is lost as heat, so less efficient power supplies will run hotter and need more cooling.

Cabling / Power Connectors - Various parts inside a computer require different types of power connections, so the power supply for a given computer needs to provide enough of each type for that specific system's hardware. Thankfully this is rarely a problem with modern power supplies, but there are a few things to watch for: making sure you have enough PCI-Express power leads for the video cards in your system (only an issue for systems with high-end or multiple video cards) and ensuring you get a power supply with EPS power connectors if using a dual CPU motherboard (some servers and workstations) are the two most common things I've run into. In addition to the connectors themselves, many power supplies these days offer modular cabling - allowing installation of only the necessary power leads in a given computer, in turn cutting down on clutter inside the system.

There are a lot of decisions involved in designing and purchasing a computer, and the power supply is one often overlooked in the effort to find the best CPU, motherboard or video card - but it is an important decision nevertheless. Hopefully this primer gives some insight into how to select a power supply based on wattage needs, efficiency, and other key factors. If you are still unsure about what unit will best fit your needs, please contact our sales consultants - they are always available to help folks make sure they get just the right computer from Puget Systems.