Skip to content
Always look at the date when you read an article. Some of the content in this article is most likely out of date, as it was written on April 14, 2017. For newer information, see our more recent articles.

If you are thinking of moving from Mac to PC, you are likely doing so for one of three reasons:

In this article we will be specifically looking at number 3 – examining how the top-end Mac Pro (late 2013) compares to two of our PC workstations. To be fair, the Mac Pro is not well optimized for Photoshop since Photoshop is primarily a single-threaded application (it only utilizes one or two CPU cores) and in fact even a lower cost Macbook Pro should be faster than the Mac Pro. However, there are a lot of people that utilize Photoshop as a secondary application in their workflow so we decided to take the time to see just how much faster a PC workstation actually is compared to the Mac Pro. 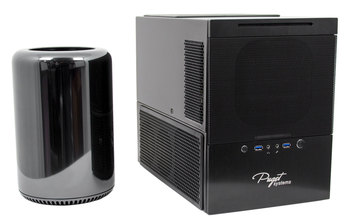 To see how the current Mac Pro compares to a modern workstation, we will be testing with the following systems:

While we could simply compare the Mac Pro to our Core i7 7700K configuration which is optimized for Photoshop, we decided to also include one of our systems that utilizes the Core i7 6950X. This is not an ideal CPU for Photoshop since it does not have as high of single-threaded performance, but it is a terrific CPU for video editing. Since the Mac Pro is configured more towards video editing as well, we thought it would be fair to include in our comparison. Even with this high-end Core i7 6950X CPU, both of our PC workstations cost significantly less than the Mac Pro. In fact, you could purchase two of our Core i7 7700K workstations and still have more than $1,500 left over!

Normally we would spend quite a bit of time going through the results action by action, but the performance across each task is remarkably consistent so we are going to leave our analysis for the next section. The only thing we want to note is that there are technically two times when the Mac Pro was faster than our Core i7 7700K workstation: Convert to RGB and Liquify. On the other hand, there were even more times when the Core i7 7700K workstation was two or even three times faster than the Mac Pro: Smart Sharpen, Pallette Knife, and HDR creation of 18MP images. 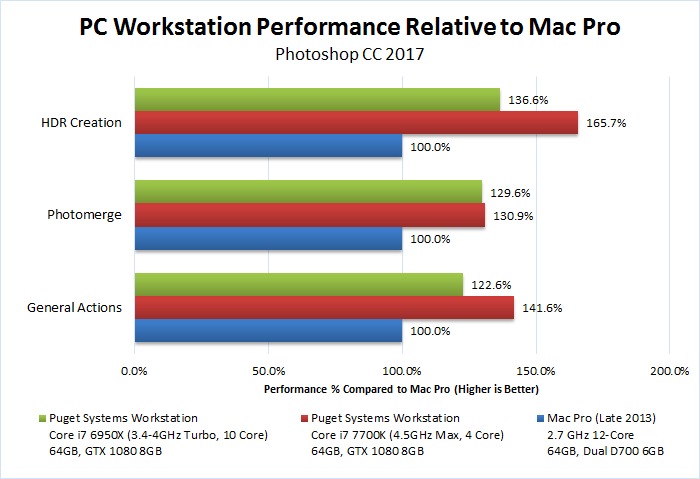 If we normalize the average of our results to the Mac Pro, you get a great idea of how it compares to either of our PC workstations. To make it short: a PC can be significantly faster than the Mac Pro at a much lower price. Depending on the task, we saw on average a 22-37% performance gain with the Core i7 6950X workstation and a 31-66% performance gain with the Core i7 7700K system.

Keep in mind that we are comparing a top-end Mac Pro (late 2013) which retails for about $9,399 to two of our workstations that cost $3,860 and $5,415. This isn't simply the raw parts costs of our workstations either, this includes all of our standard markup to cover pre-sales consultation (to ensure you are getting exactly the right hardware), our full production process (including assembly, OS/software installation, and our thorough burn-in and QC process), as well as our terrific post-sale support and repair service should you ever have a problem. Even with all of that, the two PC workstations we tested still came in at roughly 40-60% of the cost of the Mac Pro. Even if budget isn't a concern, this cost savings can give you significant financial leg room for things like upgrading monitors or increasing internal storage capacity.

As we stated in the introduction of the article, we do want to point out that the Mac Pro really isn't ideal for Photoshop. If you spend the majority of your time in Photoshop, one of the newer iMac or Macbook Pros is going to be faster and less expensive than the Mac Pro. Even then, Mac shouldn't be able to match PC but the difference would certainly be a lot less. The main reason we wanted to perform this testing is because of our series of articles comparing the Mac Pro to our PC workstations with a focus on video editing. We looked at Premiere Pro, After Effects, and Autopano, and felt that it would be useful to round out our testing with Photoshop since it is an almost universally used piece of software.