Skip to content
Always look at the date when you read an article. Some of the content in this article is most likely out of date, as it was written on April 13, 2017. For newer information, see our more recent articles.

The saying "more is better" may be true for some things, but over the past few years we have found it to be less and less true when it comes to choosing the right CPU for applications like Premiere Pro. Even just a few years ago, we were actively selling dual Xeon workstations to our customers because there was a clear performance advantage over a more standard workstation. However, with Adobe continuing to develop GPU acceleration in their software packages and the fact that you can get a fairly high number of cores on a single modern CPU, we have found that using a dual Xeon workstation is often not ideal for Premiere Pro.

We believe that it is a good idea to periodically verify our testing and since we have recently greatly improved our Premiere Pro benchmarking process, we decided it was time to take another look at whether or not there is any advantage to using multiple physical CPUs. To answer this question, we will look at the performance when rendering previews, exporting, playing a clip live, and performing a warp stabilize. 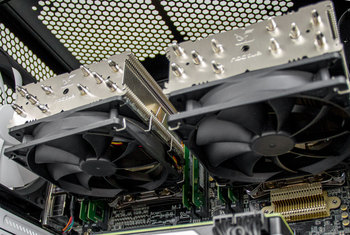 If you would like to skip right to the conclusion section to see our final thoughts on using a dual Xeon for Premiere Pro, feel free to do so!

To see how a dual Xeon workstation compares to a single CPU system in Premiere Pro, we will be testing with the following hardware:

These test configurations include two different platforms – one with a single Core i7 6950X and one with a pair of Xeon E5-2643 V4 and E5-2690 V4 CPUs. The Xeon E5-2643 V4 CPUs have a fairly low core count, but have among the fastest operating frequency currently available from Intel's dual Xeon line. This makes them great for applications that are decent at using more cores, but not perfect. The Xeon E5-2690 V4 CPUs, however, have a much higher number of cores: 28 in total across the two CPUs. In addition, they also have a moderately high operating frequency which means that they excel at highly parallel tasks. Between these two CPUs, this should give us the best possible chance of seeing performance gains in Premiere Pro with a dual Xeon workstation.

One thing to note is that based on our Premiere Pro Storage Optimization testing, we typically recommend having at minimum one separate SSD for your media cache and scratch files as that greatly improves the time it takes to import media, conform audio, and generate peak files. However, we are not testing those tasks in this article so we opted to stick with a single drive to cut down on the number of hardware variables that might affect our results.

To test exporting and rendering previews we used a moderately complex timeline involving multiple clips, Lumetri Color correction, multicam footage, as well as some other effects like a logo overlay, gaussian blur, and cross dissolves. If you want a more in-depth look at what our timelines are like, we recorded a short video explaining our test process:

Our 4K VR testing was performed using the "Sample 1 – Ring road motorbike ride" footage from the Autopano Video Benchmarking page. We tested using both some built-in Premiere Pro effects (Lumetri Color, text overlay, and cross dissolve) as well as using the Mettle Skybox 360 VR Tools and Skybox 360/VR Transitions plug-ins to apply a number of effects such as Denoise, Rotate Sphere, Sharpen, and Iris Wipe. We typically try to avoid using plug-ins in our testing, but since Premiere Pro only has basic support for VR at the moment we felt it made sense to also look at the popular Mettle plug-in for VR projects. 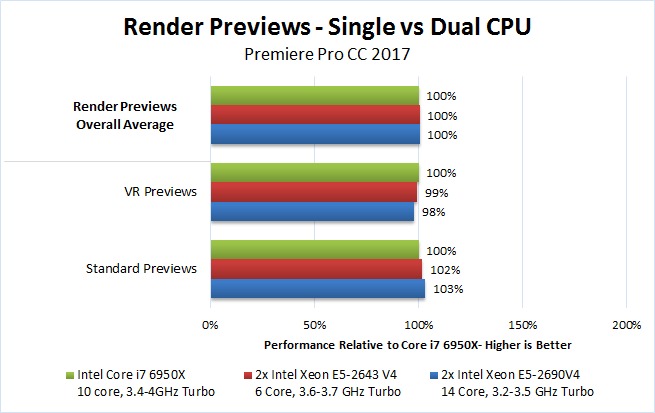 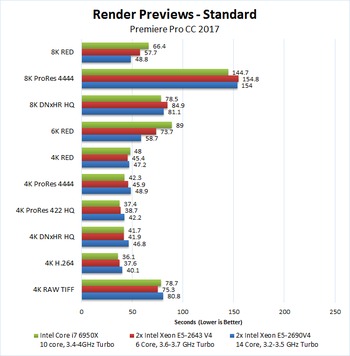 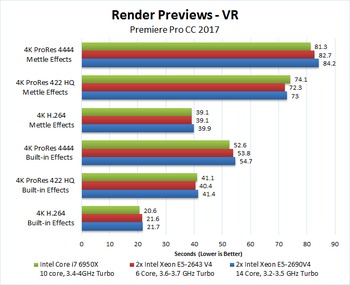 Rendering Previews is the most inconsistent of our tests, with the dual Xeon configurations sometimes being great and other times simply mediocre. If you average all of the standard project results, the 2x E5-2643 V4 system is about 2% faster than the Core i7 6950X while the 2x E5-2690 V4 system is 3% faster. Almost all of that performance gain is from 6K and 8K RED footage, however, so if you don't work with that high of resolution RED footage the dual Xeon systems are actually about 2-7% slower than the Core i7 6950X.

Combining all of our test projects, the three CPU are actually on average identical. It is unusual for things to line up this perfectly, but for rendering previews it just so happened that there was no advantage – on average at least – to using any one of these CPUs over the others.

In addition, since VR has been gaining steam we also wanted to include exporting VR projects to 4K H.264 using both the built-in effects and those in the Mettle plug-in. This is currently one of the most popular plug-ins for editing VR footage so we felt it was prudent to include in our testing. 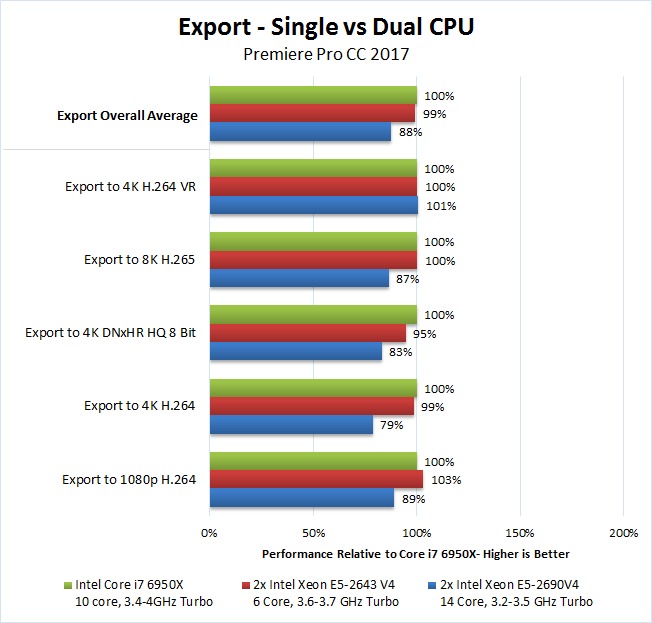 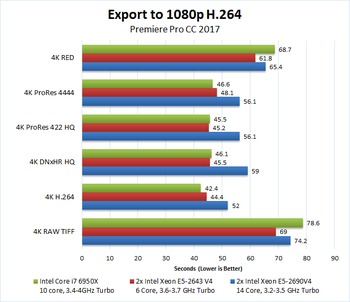 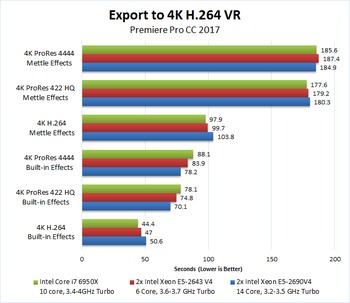 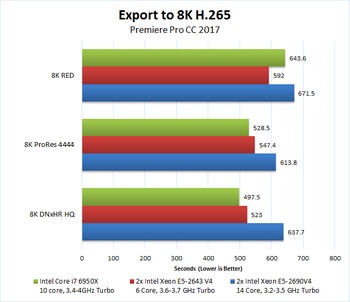 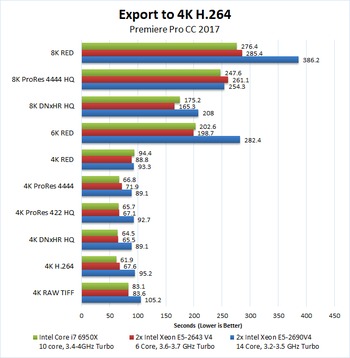 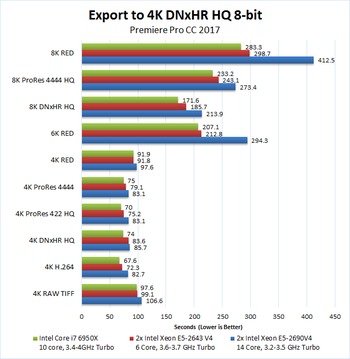 Unlike rendering previews, exporting is pretty straight-forward. Overall, the 2x E5-2643 V4 sysem was only able to barely match the Core i7 6950X. It was slightly faster when exporting to 1080p H.264, but slower by about the same amount when exporting to 4K DNxHR HQ. The 2x E5-2690 V4 system didn't fare quite as well, however. The exact result varies based on the test (and it actually did well on the 4K H.264 VR test) but overall it was about 12% slower than the Core i7 6950X.

While exporting and rendering previews may be the easiest and most common thing to benchmark in Premiere Pro, we have received a lot of feedback that performing a warp stabilize is another task where high performance is important. We have found that the time it takes to complete a warp stabilize analysis does not vary much on the source codec, but the resolution does make a big difference so we will be testing with a 4K H.264 clip as well as a 8K ProRes 4444 clip in the next section.

Since warp stabilize is not well threaded (it does not take great advantage of multiple CPU cores), one method people use to decrease the time it takes to complete the analysis is to split their clip into multiple parts and analyze all of them at the same time. This essentially forces Premiere to make more effective use of all the CPU cores in your system. Since this is trick employed fairly commonly, we decided to not only time how long it takes to apply a warp stabilization effect to a single 10 second clip, but also how long it takes if the clip is split into 2, 4, 8, and 16 "sub-clips" that are all analyzed at the same time. 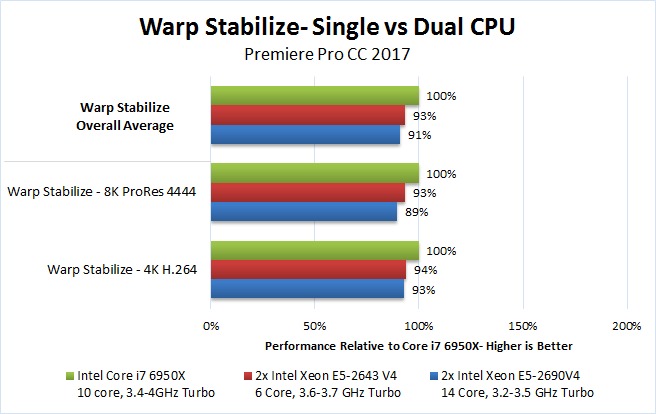 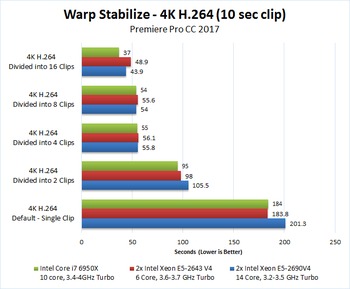 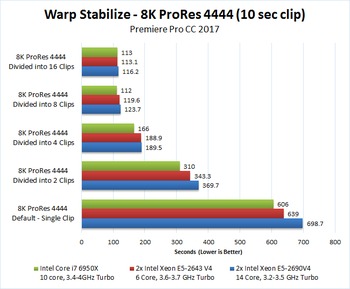 Warp Stabilization is a very interesting test because while it is not threaded well by default, you would think that splitting up the clip would allow the dual Xeon configurations to blow past the Core i7 6950X. Unfortunately, while we did see some nice performance gains overall, the reality is that splitting up the clip only allowed the dual Xeon systems to at best match the Core i7 6950X.

Performance when exporting and rendering previews is important, but being able to play your footage live at high resolution is equally valuable. This a challenge for us to accurately test since the resolution you can play at (full, half, quarter, etc.) is highly dependent not only on your source footage but also what effects you have applied to the timeline.

To try to keep things universally applicable, we opted to test our source footage with two relatively simple timelines. The first test we did was to see what playback resolution we were able to play our clips (with no dropped frames) without any effects or transitions applied. After that, we did the same test only with a Lumetri Color Correction effect applied. Note that if we dropped any frames (even if it was just one or two at the very start of playback) we called it an unsuccessful run even if the rest of it was completely smooth.

Moving on to our testing with just a Lumetri Color Correction effect applied, the two dual Xeon systems definitely did a bit better. However, they were still only able to at best match the Core i7 6950X. In no instance were we able to play our footage at a higher resolution with either of the dual Xeon configurations than we were able to with the Core i7 6950X.

If you are looking for a short answer as to whether you should purchase a dual Xeon workstation for Premiere Pro, the answer is very clear:

Even ignoring the price aspect, we rarely saw any benefit to using either of the dual Xeon CPUs we tested over the Core i7 6950X. There were a few times where rendering previews was faster (6K/8K RED) but for the other previews, exporting, warp stabilize, and even live playback performance going with the Core i7 6950X is clearly a better choice. 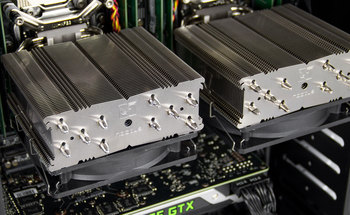 Considering that a Core i7 6950X workstation should be around $1,500 cheaper than a similarly specced workstation with dual Xeon E5-2643 V4 CPUs, and almost $4,000 cheaper than a 2x Xeon E5-2690 V4 system, we see absolutely no reason to recommend a dual Xeon workstation for Premiere Pro. A single CPU system will be overall faster, much more cost effective, less complicated (which means more reliable and more consistent performance across various applications), quieter, and can be physically much smaller. In the past there used to be an argument for dual Xeon due to the higher RAM and PCI-E card capacity, but today one of our Core i7 6950X workstations can be configured with up to 512GB of RAM and four GPUs – both of which are frankly overkill for Premiere Pro.

Dual Xeon may have been great in the past for applications like Premiere Pro, but with the faster modern hardware and ever changing software optimizations (most notably the increase in GPU acceleration) they simply don't make sense right now.