Recently we have had a number of customers who have decided to make the move from Mac to PC, so in this article we are going to see just how much faster one of our PC workstations actually is compared to the Mac Pro (late 2013) in  Autopano Video Pro 2.6. 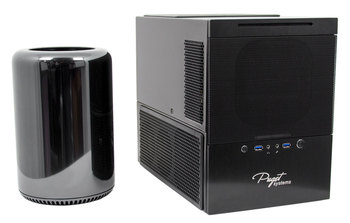 To see how the current Mac Pro compares to a modern PC workstation, we will be testing with the following systems:

Two of the biggest draws to a PC workstation are the price and performance so we decided to compare the Mac Pro to two different PC configurations. The first is a fairly typical workstation we sell for video editing using an Intel Core i7 6900K, GeForce GTX 1080 8GB video card, and 64GB of RAM. This system comes in at almost half the cost of the Mac Pro so it should be a great indicator of the kind of performance you could expect while significantly reducing the cost of the workstation itself. Even if you have a large budget, freeing up almost $5,000 can open a number of possibilities including upgrading multiple workstations at the same time, upgrading your monitors and other peripherals, adding increased internal storage (which isn't even an option on the Mac Pro), or taking a nice vacation to Hawaii.

In addition to this more affordable workstation, we will also be testing with one of the best overall hardware configurations for Autopano Video Pro and video editing in general. This workstation uses the Intel Core i7 6950X, a GTX 1080 Ti 11GB video card, and 128GB of RAM. Note that the 128GB of RAM in this system should not actually impact performance for our testing since our sample projects didn't need anywhere near this amount. We simply included it to show that you can get an extremely capable workstation with twice the RAM of the Mac Pro while still coming in at just over two thirds the cost of the Mac Pro.

We will perform our testing using the two sample projects provided by Autopano on their Video - Benchmarking page. The main difference between these projects is that "Sample 1" contains 6 cameras and lasts a total of 29 seconds while "Sample 2" contains 7 cameras and is 36 seconds long. Both of these projects were recorded on GoPro Hero3 Black cameras at 1920x1080 @ 48fps.

While we tested each step necessary to create a 360 degree video, we decided to add them together into a "total workflow" to examine how each system compares. We feel that this is the most accurate way to gauge how much faster one of our workstations would be for your work overall since some steps only take a handful of seconds while others take several minutes. If you prefer to look at the individual results, they are available under the main chart. 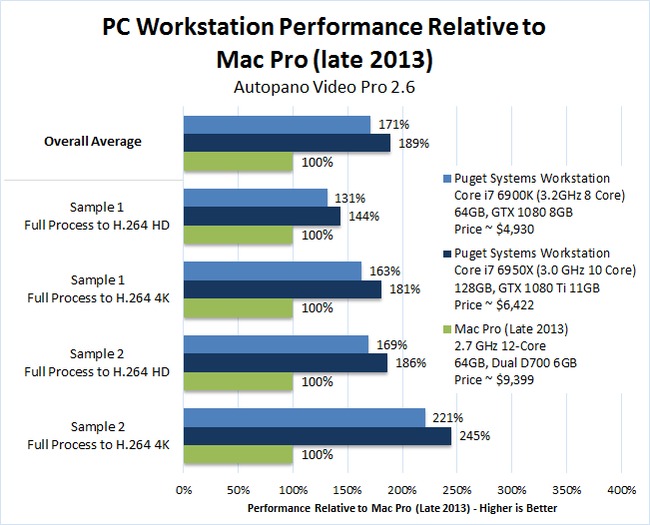 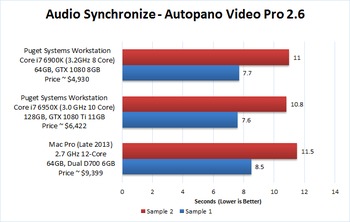 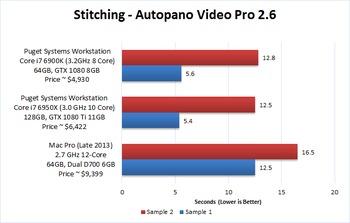 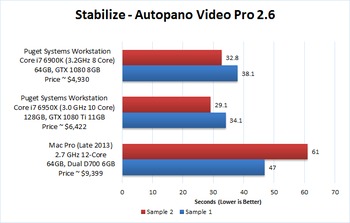 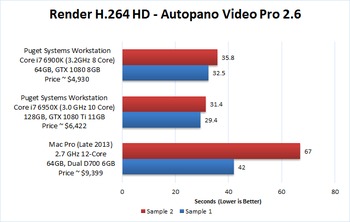 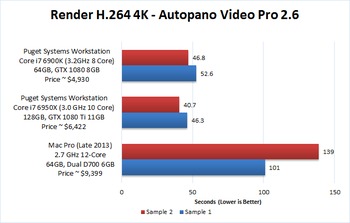 The results are very clear, so there actually isn't much to talk about. On average, our $5,000 PC workstation was about 70% faster than the top of the line Mac Pro while our $6,500 workstation was 89% faster. This isn't quite twice as fast on average, but we do want to point out that rendering to 4K the more demanding project (Sample 2) our workstations were both more than twice as fast as the Mac Pro. Of course, the flip side to this is that the more simple project rendering to H.264 HD was only about 30-45% faster on our workstations, but even that is pretty impressive.

To get the obvious out of the way: yes, a modern PC workstation is faster than the current Mac Pro in Autopano Video Pro. Even without our testing almost any Mac or PC user could tell you that with confidence since the hardware in the Mac Pro is over four years and two or more generations out of date. To be honest, however, we were a bit surprised at how significant the difference actually is.

While our PC workstations were not always twice as fast as the top-end Mac Pro, they were still significantly faster.

To give you an idea of how much time this could save, creating a 360 degree video in Autopano Video Pro that takes 60 minutes on a Mac Pro would take only 27 to 46 minutes to complete on our more affordable PC workstation. Upgrading to our high-end PC would get that work down even further to just 24.5 to 42 minutes. That is a massive amount of time saved - especially considering how much more affordable our systems are.

Also keep in mind that the Mac Pro does not support VR headsets like the Oculus Rift or HTC Vive. So a further advantage to our PC workstations is that you can have a headset hooked up to your system which allows you to quickly check over your 360 and VR videos. If you were to use a Mac Pro you would need to fully export the video, transfer it over to your phone (assuming it supports VR), then finally give it a look. If you don't care about VR and just want a 360 video where you have to pan around with your mouse the Mac could work, but with the rise of VR this is something we highly recommend you keep in mind.