In this article we are going to look at a wide range of NVIDIA GeForce video card options to see exactly how they compare in Autopano Video Pro 2.6. If you are interested in how different hardware performs in Autopano Video Pro, be sure to check out our other articles: 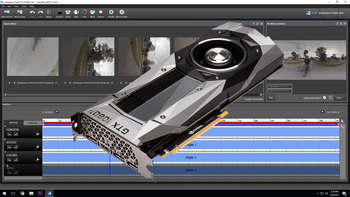 To see how the different cards perform in Autopano Video pro 2.6, we used the following test platform and video cards:

Our test platform is based around the Intel Core i7 6950X which in our testing we found to be the best all-around CPU in Autopano Video Pro. We will be looking at a range of NVIDIA GeForce cards including the GTX 1060, 1070, 1080, 1080 Ti as well as the Titan X (Pascal). Just as a point of reference, we will also look at how long it takes to render with GPU acceleration turned off to see just how much of a difference it makes to use the GPU in addition to the CPU.

To compare the different cards, we will be using the two sample projects provided by Autopano on their Video - Benchmarking page. The main difference between these projects is that "Sample 1" contains 6 cameras and lasts a total of 29 seconds while "Sample 2" contains 7 cameras and is 36 seconds long. Both of these projects were recorded on GoPro Hero3 Black cameras at 1920x1080 @ 48fps. Using these projects, we will look strictly at how long it takes to render to both H.264 HD and H.264 4K since that is currently the only task in Autopano Video Pro that makes significant use of the video card.

One thing to be aware of is that we timed our results from the moment a button was clicked to the time the task completed. We believe this is the most accurate way to measure relative performance, but it does mean that our results are actually 4-5 seconds longer than what Autopano itself reports as the total render time. 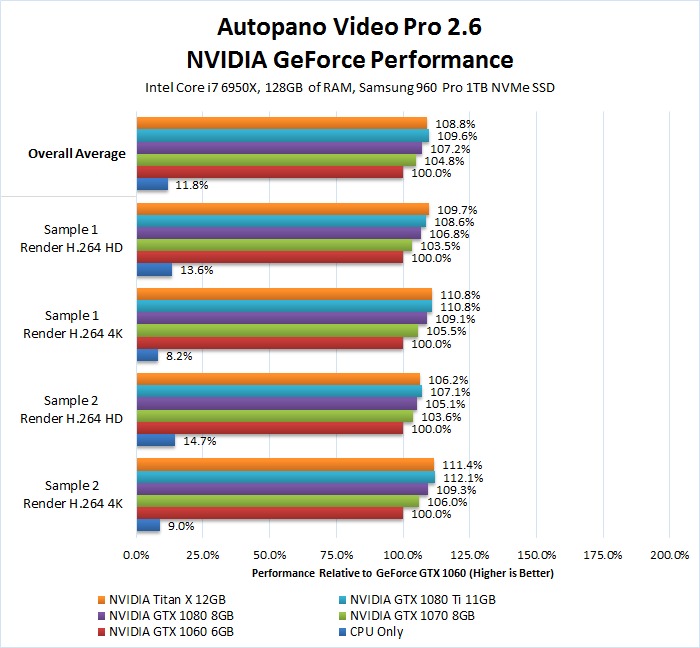 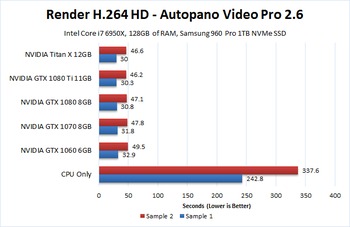 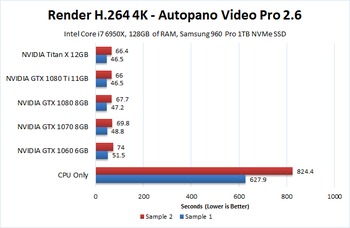 Each GPU performed slightly different depending on our test project and render settings, but one thing we want to point is how much faster it is to simply use a video card. Even the GeForce GTX 1060 was almost ten times faster than using the CPU alone! Unfortunately, while there is definitely a further increase in performance with the higher-end cards, there is a strong case of diminishing returns once you get beyond a mid-range GPU.

Overall, there are massive performance gains to be had be using a GPU in Autopano Video Pro but using a high-end, expensive video card is a bit harder to justify. There are certainly advantages to using a more expensive GPU, but it gets less and less impressive as you get into the more expensive cards. Unless you are looking to get the absolute best performance possible out of Autopano Video Pro, we would recommend sticking with a GTX 1060 or GTX 1070 and focusing your budget on getting the best CPU you can.

While Autopano Video Pro may not be able to take advantage of the GPU as well as a program like Premiere Pro, one nice takeaway from our testing is that the best GPUs for Autopano Video Pro are also the best GPUs for Premiere Pro. So if your workflow includes stitching together 360 degree video in AutoPano and making furtheredits in Premiere Pro, you don't have to sacrifice performance in one program to get better performance in the other. In fact, the optimal hardware for these two software packages is so closely related that we have decided to integrate our testing directly into our Premiere Pro workstations. So if you are in the market for a new system, be sure to check them out!