Skip to content
Always look at the date when you read an article. Some of the content in this article is most likely out of date, as it was written on April 6, 2017. For newer information, see our more recent articles.

In this article we are going to look at a wide range of Intel CPU options that you might consider in a video editing workstation to see exactly how they compare in Autopano Video Pro 2.6. 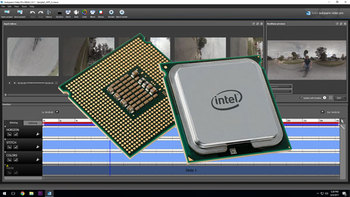 To see how the different Intel CPUs perform in Autopano Video pro 2.6, we used the following configurations:

These test configurations include three different platforms along with six different CPU models. For video editing in general, we typically would recommend a "High-End" Core i7 CPU with 6-10 cores, although we opted to include the i7 7700K to find out if Autopano Video Pro prefers a CPU with high single-threaded performance over a CPU with more physical cores. In addition, since this is among the first testing we have done for Autopano Video Pro, we decided to include two dual Xeon options in case it scales across multiple CPUs better than we expect.

We will perform our testing using the two sample projects provided by Autopano on their Video – Benchmarking page. The main difference between these projects is that "Sample 1" contains 6 cameras and lasts a total of 29 seconds while "Sample 2" contains 7 cameras and is 36 seconds long. Both of these projects were recorded on GoPro Hero3 Black cameras at 1920×1080 @ 48fps.

While we tested each step necessary to create a 360 degree video, we decided to add them together into a "total workflow" to examine how each CPU compares. We feel that this is the most accurate way to gauge how much faster one CPU would be for your work overall rather than taking an average of each step since some steps only take a handful of seconds while others take several minutes. If you prefer to look at the individual results, they are available under the main chart. 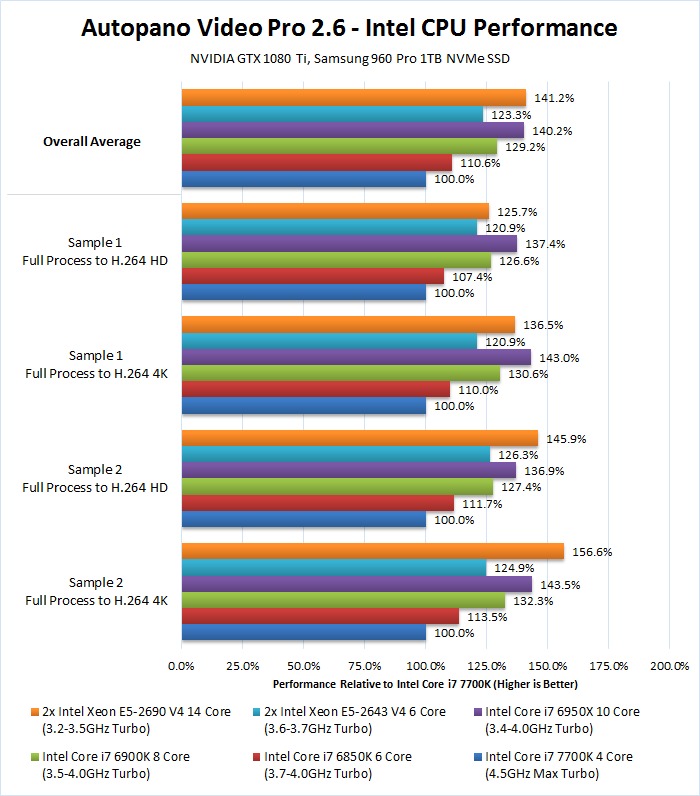 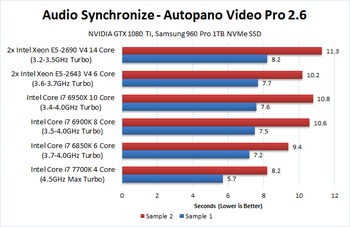 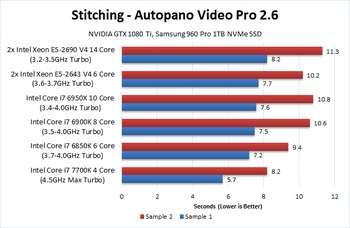 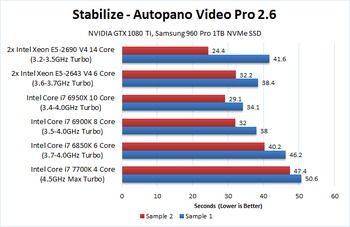 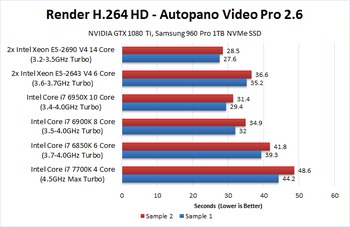 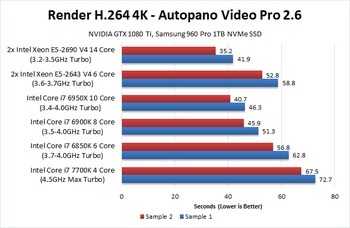 With just a single CPU, the results are pretty straightforward. As you increase in core count (and price), the performance goes up. It varies a bit depending on our test project and whether you are rendering to HD or 4K, but overall you are looking at about a 10-15% performance gain for each model up you move.

Things get a little odd with our dual Xeon results, however. Starting with the dual Xeon E5-2643 V4 which together have a total of 12 CPU cores, this setup was actually about 12% slower than the Core i7 6950X with 10 cores. Even the dual Xeon E5-2690 V4 with 28 total cores was only around 1% faster than the much, much more affordable Core i7 6950X. The reason behind this is likely due to the fact that unless the software scales extremely well across a high number of cores – which is extremely rare – the additional overhead associated with a dual CPU configuration often completely negates any performance gain you would expect to see.

Overall, the different CPUs performed as we expected in Autopano Video Pro. There are some nice performance gains to be had by using higher-end CPUs, but even if you have the budget for a dual CPU setup that is something we recommend against doing since it will not always give you a performance benefit. Not only can you get better or near-identical overall performance with a CPU like the Core i7 6950X, a single CPU will also be much less complicated (which hopefully means less problems) and will be faster in most other programs. For example, even Premiere Pro and After Effects – which used to work very well with dual CPU configurations – currently run much better on a single CPU than they do on multiple CPUs.

One nice aspect of our testing is that it turns out that the best CPUs for Autopano Video Pro are also the best CPUs for Premiere Pro. So if your workflow includes stitching together 360 degree video in AutoPano and making further edits in Premiere Pro, you don't have to sacrifice performance in one program to get better performance in the other. In fact, the optimal hardware for these two software packages is so closely related that we have decided to integrate our testing directly into our Premiere Pro workstations. So if you are in the market for a new system, be sure to check them out!