Compared to a $20,000 Mac Pro, it only takes about $4,000 with a PC based around the AMD Ryzen 3900X CPU in order to get similar performance in Premiere Pro. And if you opt instead for an even more powerful PC using an AMD Threadripper 3970X, you can get up to 50% higher performance compared to the Mac Pro for roughly a quarter the cost!

We understand that there is a lot of benefit to staying in the Apple ecosystem if you also have an iPhone, MacBook, etc., but that is an absolutely massive price and performance advantage for going with a PC workstation over a Mac Pro.

Apple's new Mac Pro is a solidly engineered system, but its hefty price tag meant that it took us a while to get our hands on one. Thanks to our friends at Linus Media Group (creators of Linus Tech Tips), however, we are finally able to see how well it performs in Adobe Premiere Pro!

Anytime we do Mac vs PC testing, things can easily become a bit heated in our comments section, so we are going to largely side-step the question of whether you should use a Mac or a PC. Here at Puget Systems, we rarely try to outright convince anyone to move from Mac to PC, but rather take the standpoint of offering as much information as we can so that you can make an informed decision for your situation. If your workflow is better on a Mac, that is great! But if you are ready and able to take advantage of the higher performance, lower cost, and greater customization of a PC and want to work with a company that is intimately familiar with the transition from Mac to PC, we are here to help! 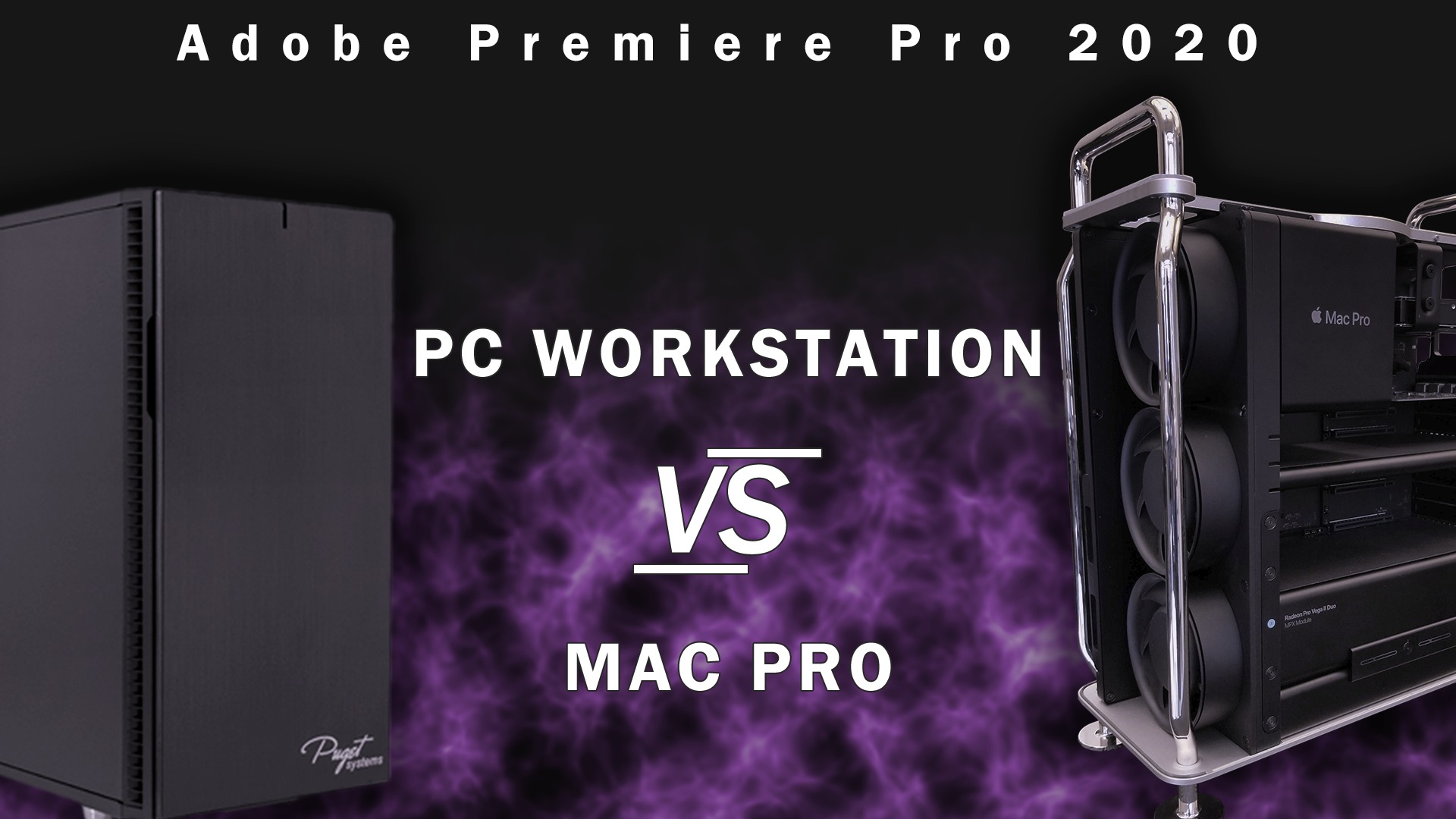 In this article, we will be examining the performance of a new 2019 Mac Pro in Premiere Pro compared to a range of PC workstation configurations using AMD Threadripper, AMD Ryzen, Intel X-series, and Intel 9th Gen processors. In addition, we will be including an iMac Pro as well as a previous generation Mac Pro as additional reference points. If you are interested in how the Mac Pro compares in other applications, we also have other articles for Photoshop and After Effects available on our article listing page.

In order to see how each of these configurations performs in Premiere Pro, we will be using our PugetBench for Premiere Pro V0.9 benchmark and Premiere Pro 2020 (14.0.4). This benchmark version includes the ability to upload the results to our online database, so if you want to know how your own system compares, you can download and run the benchmark yourself.

However, keep in mind that some of the configuration options for the Mac Pro we have may not do a ton for Premiere Pro. For example, while Premiere Pro technically can utilize multiple GPUs, we typically don't see much of a benefit unless the GPUs are relatively low-end. If you want to actually get a Mac Pro for Premiere Pro, you may get similar performance with a single GPU rather the dual GPUs we have in this Mac Pro and save $2,800.

Feel free to skip to the next section for our analysis of these results to get a wider view of how each system performs in Premiere Pro. 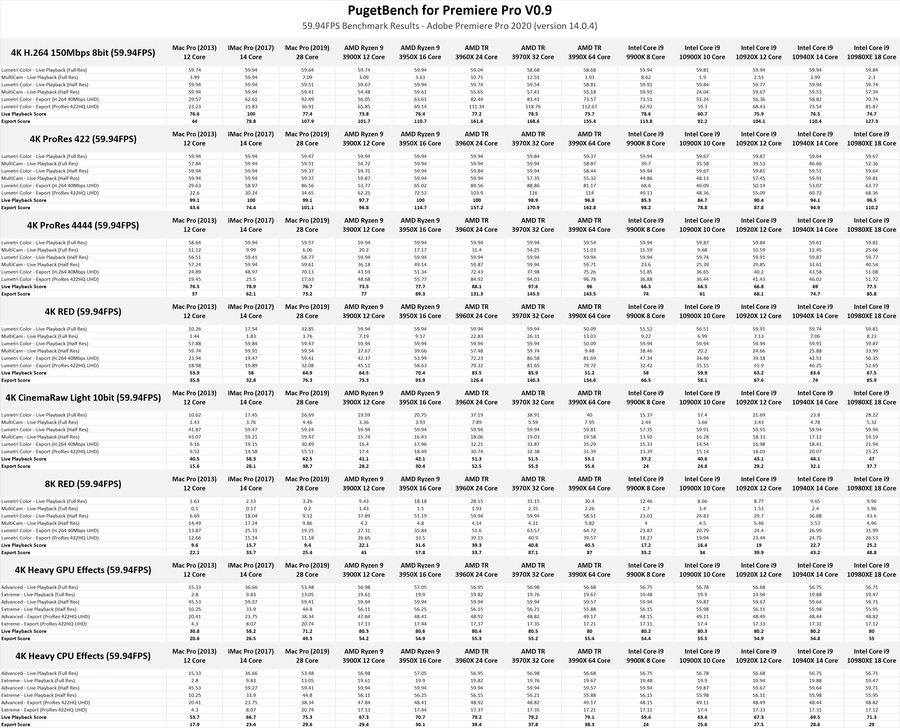 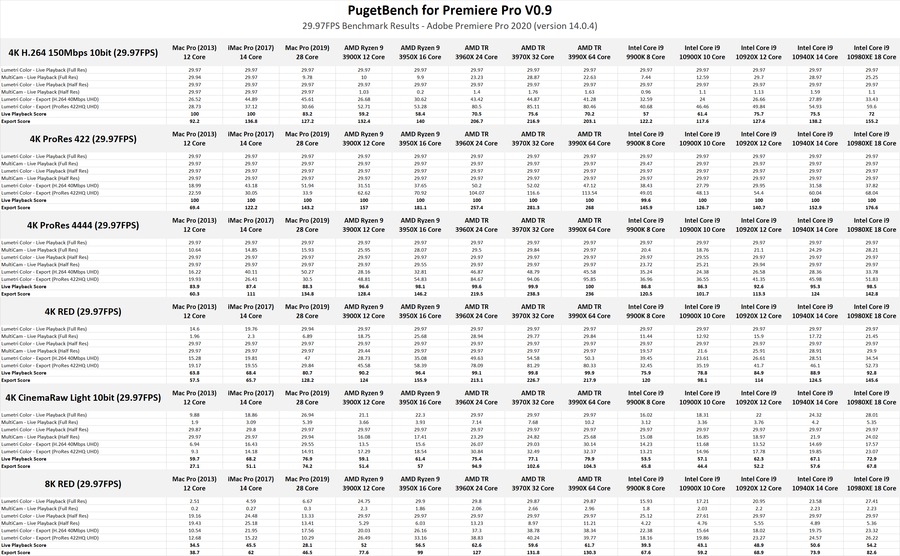 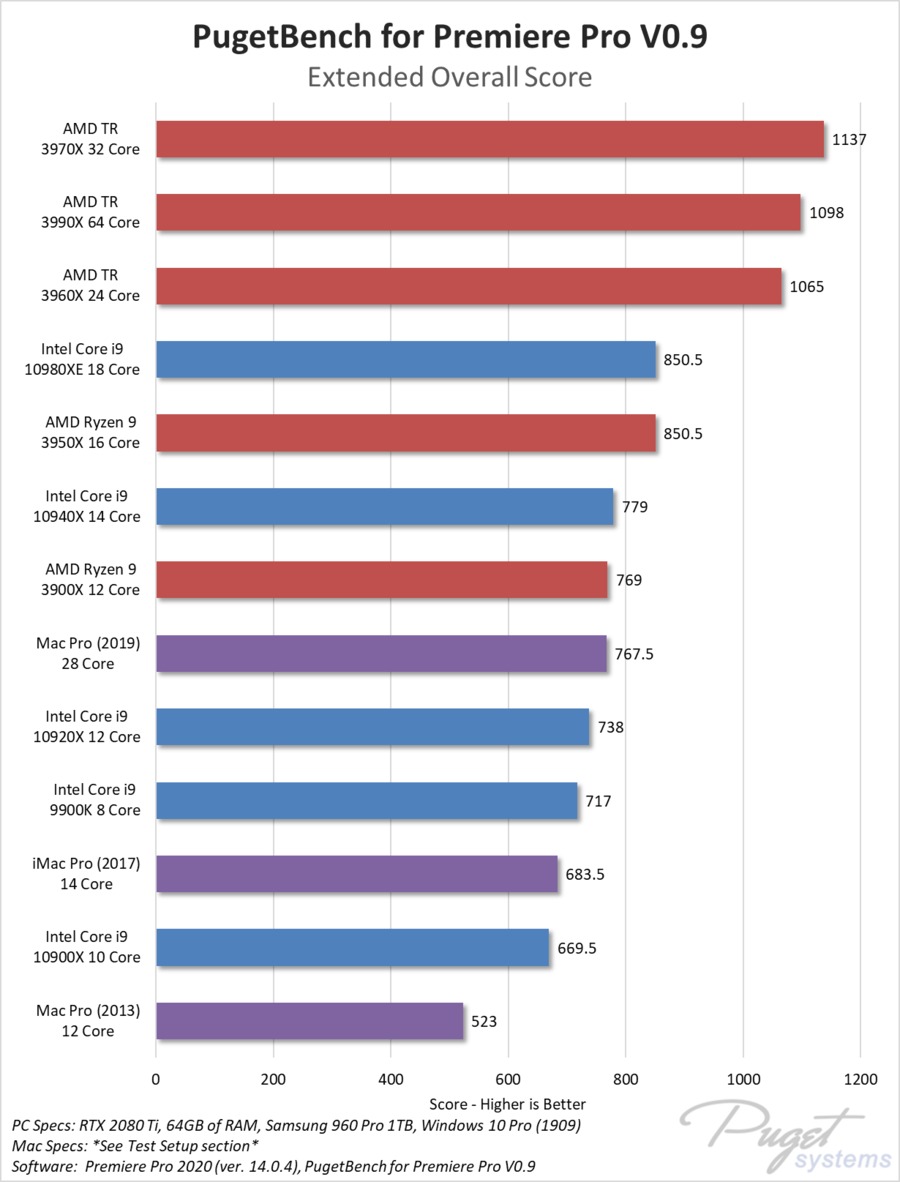 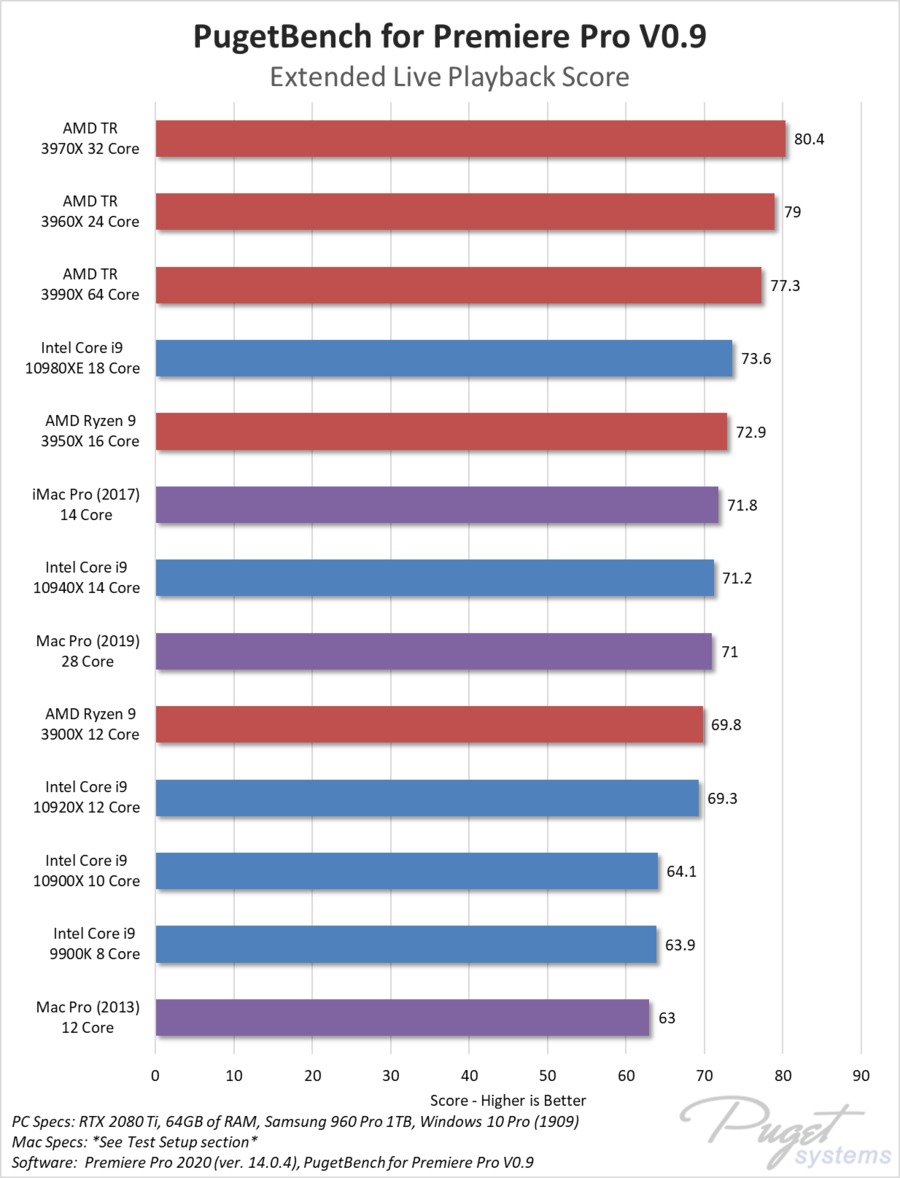 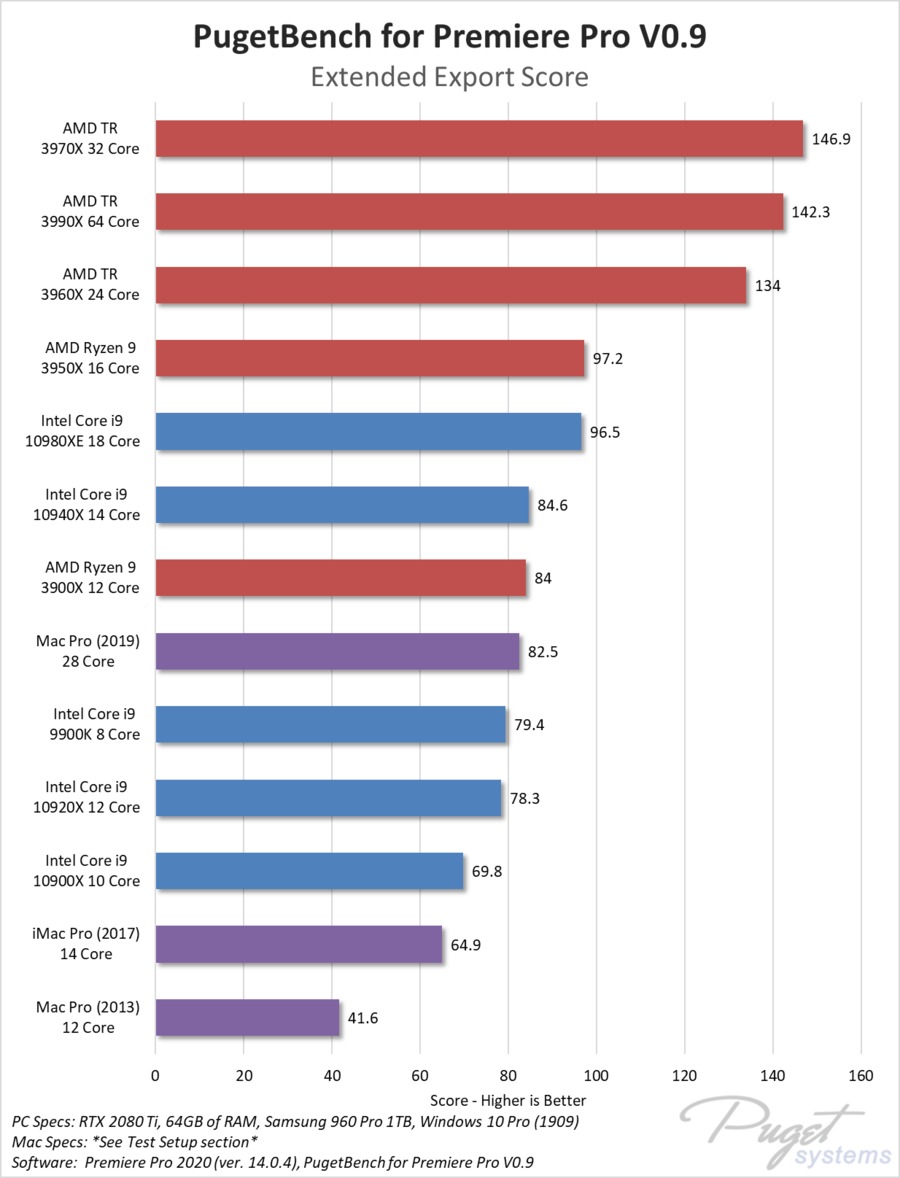 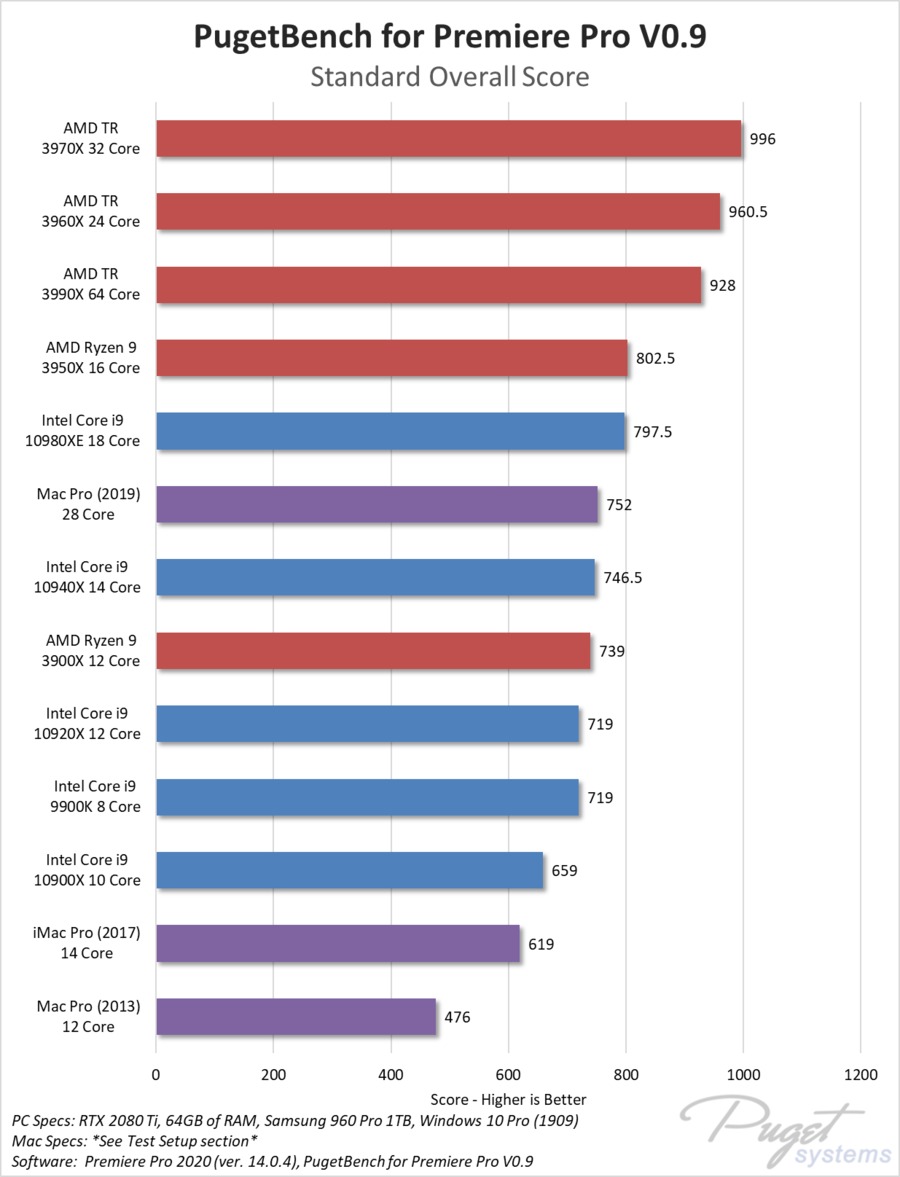 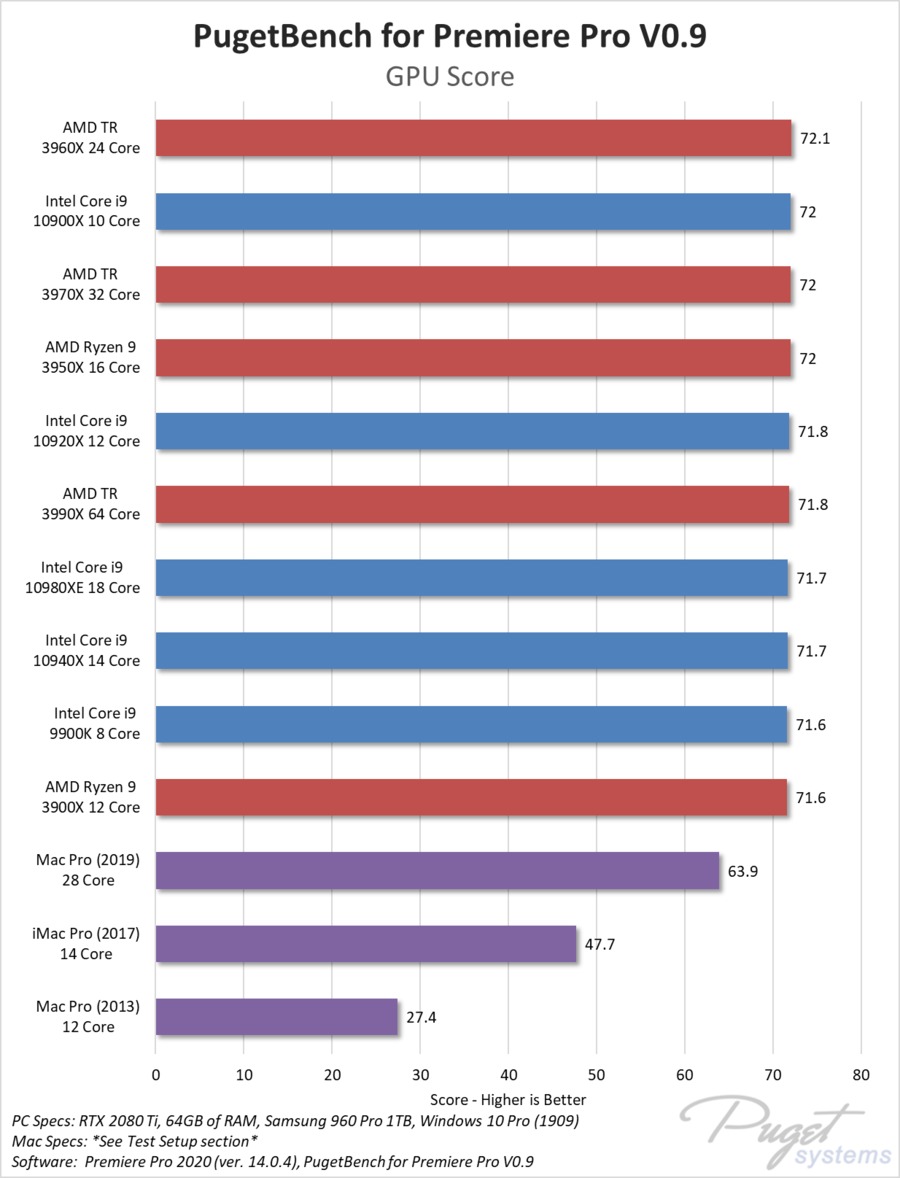 Premiere Pro is fairly decent at leveraging the power of higher core count CPUs, which is why AMD's Threadripper processors with 24, 32 and even 64 cores are at the top of the chart. Even so, the 28 Core Mac Pro does not give particularly great performance in Premiere Pro.

Overall, the new 2019 Mac Pro only performs on par with the AMD Ryzen 9 3900X 12 Core configuration which is about 1/5 the cost. To be completely honest, we expected much better performance out of the Mac Pro and are a bit surprised to see how relatively poor it performed given it's specs on paper. It is certainly faster than the 14 Core iMac Pro (although only by about 12%), but we expected the Mac Pro with twice the cores and dual GPUs to fare much better.

If you are looking for a Premiere Pro workstation, it almost seems ridiculous to claim that a PC with an AMD Threadripper 3970X CPU and an NVIDIA GeForce 2080 Ti will be 50% faster than a Mac Pro at 1/3 the cost, but here we are. To be fair, the difference for live playback – which most people value over export speed – is only about 12% faster with a 3970X-based system, but the much lower export performance with the Mac Pro even though it costs 3x more is… not great.

Mac Pro (2019) vs a PC Workstation for Premiere Pro

Since there are so many reasons why either a Mac or a PC may be right for you, we generally try to focus on the straight performance results and not tell you which you should purchase. But in this case, the Mac Pro is so underwhelming that it is hard to not simply say "Don't buy a Mac Pro for Premiere Pro".

This isn't like our Photoshop testing where the Mac Pro was only a hair slower than a PC, or our After Effects testing where a PC can easily be 20% faster at a much lower cost. This time, we are talking a PC being up to 50% faster on average for 1/3 the cost. We understand that there is a lot of benefit to staying in the Apple ecosystem if you also have an iPhone, MacBook, etc., but that is a huge amount of performance and cost savings you will be giving up to get a Mac Pro.

By skipping the Mac Pro and going with a PC, you could easily save $14,000 which could be used for a host of other things to improve your workflow. Maybe you can finally upgrade your reference monitor to a really nice Eizo or Flanders Scientific model. Or use it as an opportunity to move to a central NAS storage unit from LumaForge. Or just take a couple months off to recharge. And this isn't taking into account the amount of money you might be able to earn due to the higher performance of a PC.

Keep in mind that the benchmark results in this article are strictly for Premiere Pro and that performance will vary widely in different applications. If your workflow includes other software packages (we have similar articles for Photoshop and After Effects), you need to consider how the system will perform in those applications as well. Be sure to check our list of Hardware Articles to keep up to date on how all of these software packages perform with the latest CPUs.