Photoshop doesn't scale well with a higher number of CPU cores, which means that once you get up to a mid-range CPU, you generally don't see much of a difference in Photoshop performance. This is something we talk all the time when looking at Photoshop performance on PCs, but it is also just as true for Macs.

Apple's new Mac Pro has been out for about 5 months now, and thanks to our friends at Linus Media Group (creators of Linus Tech Tips) we were finally able to get our hands on one for testing. While I may or may not have thrown out my back lugging the system up a flight of stairs (it weighs a ton!), there is no doubt that the Mac Pro is a very slick and sturdy machine. But what we are always interested in is exactly how well it performs in real-world applications like Photoshop.

Anytime we do Mac vs PC testing, things can easily become a bit heated in our comments section, so we are going to largely side-step the question of whether you should use a Mac or a PC. Here at Puget Systems, we rarely try to outright convince anyone to move from Mac to PC, but rather take the standpoint of offering as much information as we can so that you can make an informed decision for your own situation. If your workflow is better on a Mac, that is great! But if you are ready and able to take advantage of the higher performance, lower cost, and greater customization of a PC and want to work with a company that is intimately familiar with the transition from Mac to PC, we are here to help! 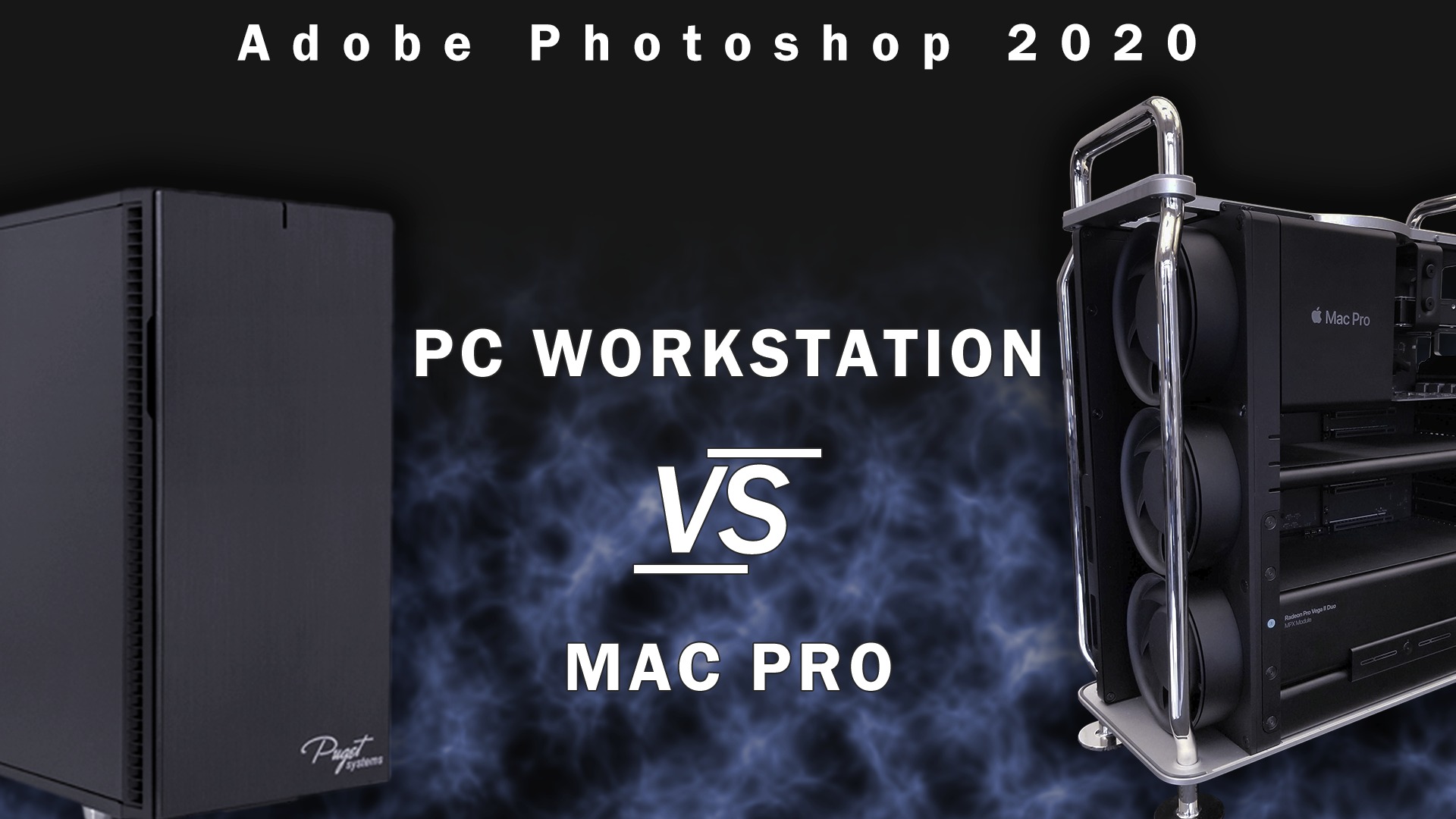 In this article, we will be examining the performance of the new 2019 Mac Pro in Photoshop compared to a range of PC workstation configurations using AMD Threadripper, AMD Ryzen, Intel X-series, and Intel 9th Gen processors. In addition, we will be including an iMac Pro as well as a previous generation Mac Pro as additional reference points. If you are interested in how the Mac Pro compares in other applications, we also have other articles for Premiere Pro and After Effects available on our article listing page.

In order to see how each of these configurations performs in Photoshop, we will be using our PugetBench for Photoshop V0.9 benchmark and Photoshop 2020 (21.1.1). This benchmark version includes the ability to upload the results to our online database, so if you want to know how your own system compares, you can download and run the benchmark yourself.

However, keep in mind that some of the configuration options for the Mac Pro we have are not going to do much for Photoshop. For example, the dual GPUs likely won't increase performance much, so you could save $2,800 and get a single Radeon Pro Vega II. The 28-core CPU is also likely overkill in this case, and a more reasonable option can save you anywhere from $1k to $7k.

Feel free to skip to the next section for our analysis of these results to get a wider view of how each system performs in Photoshop. 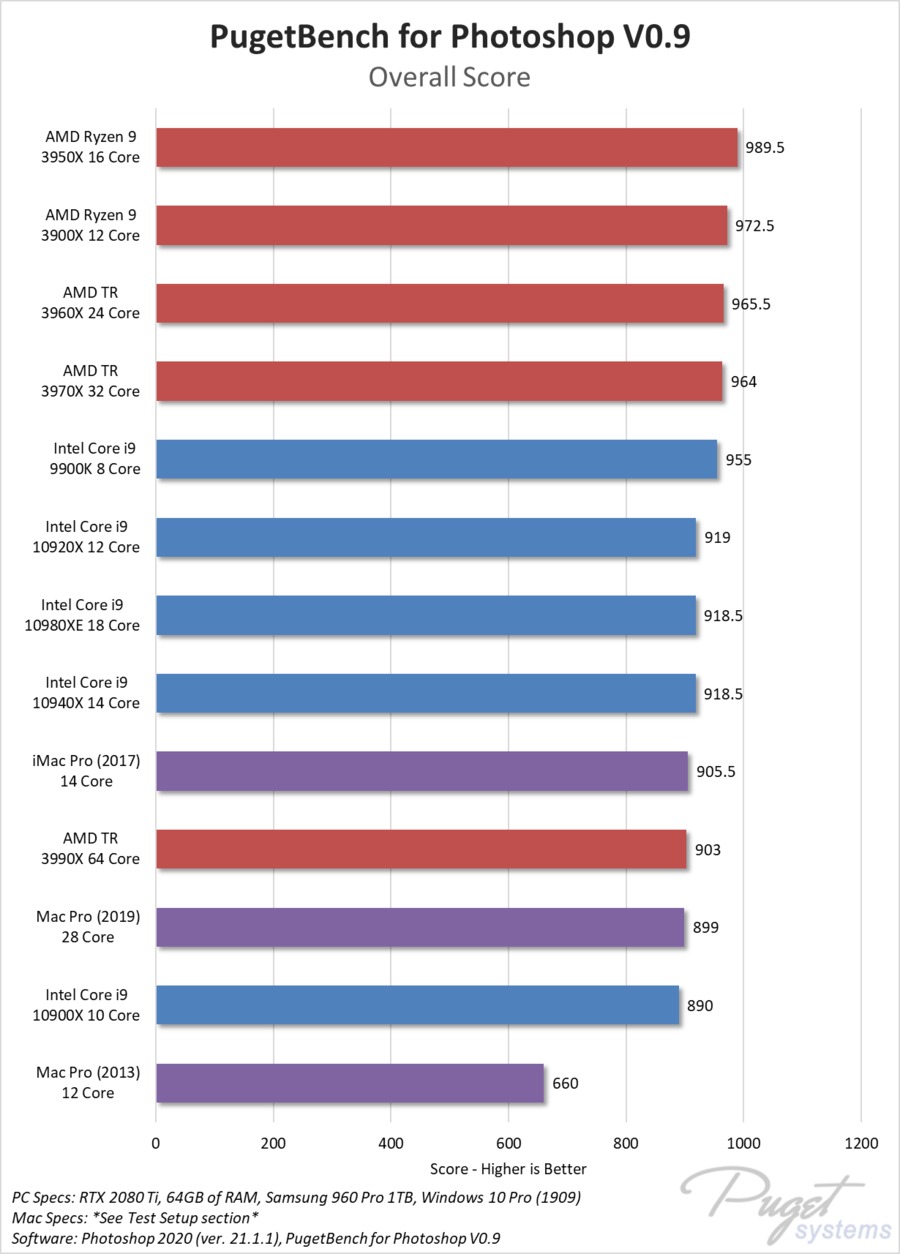 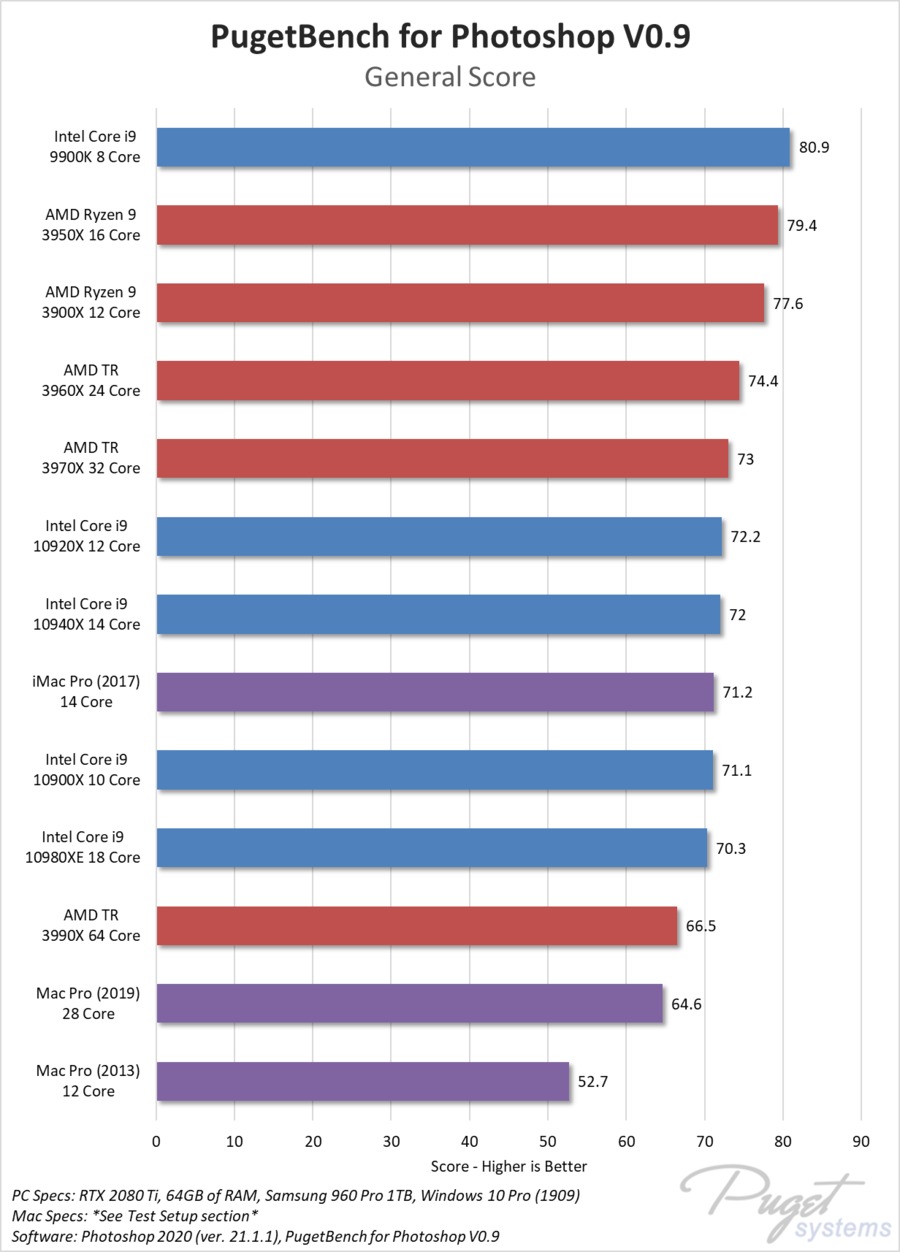 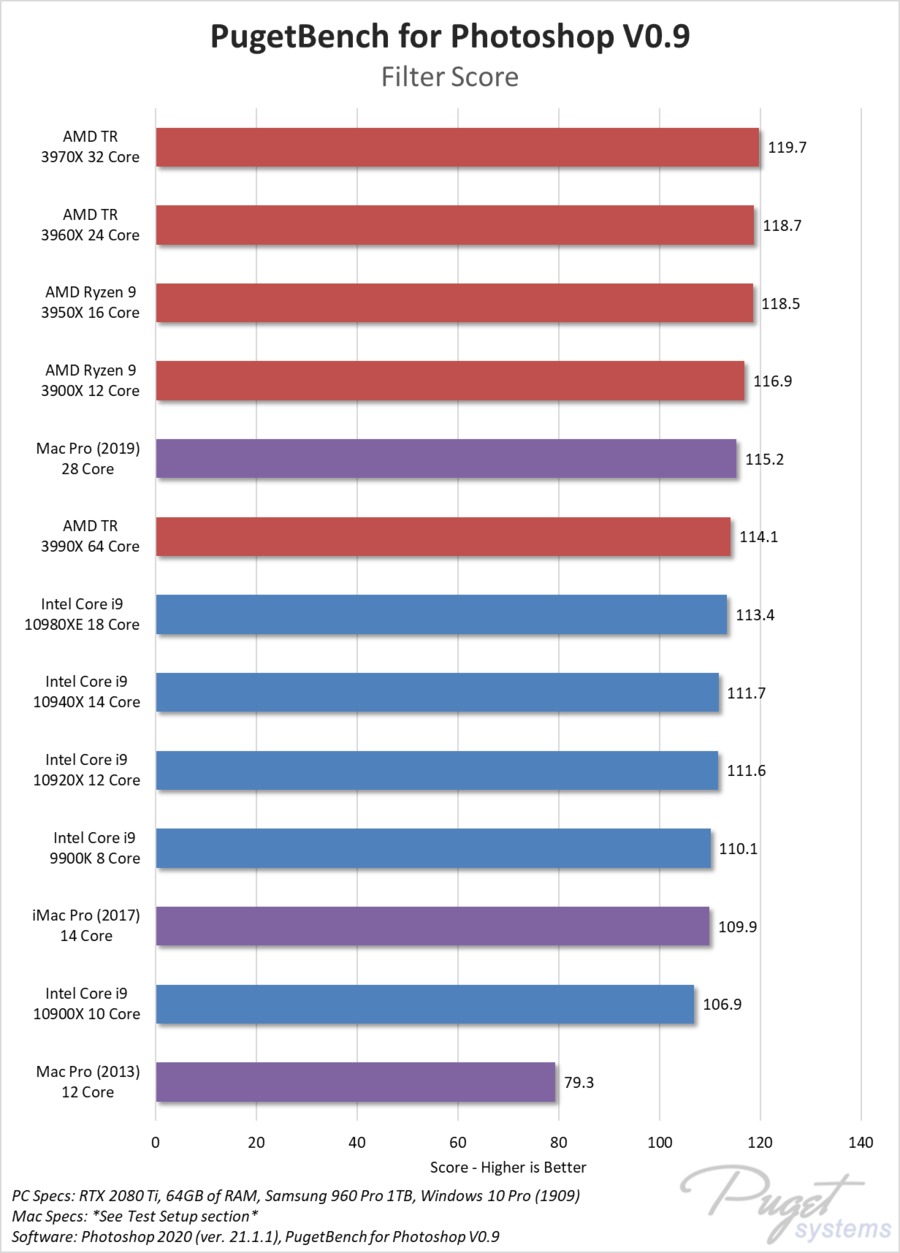 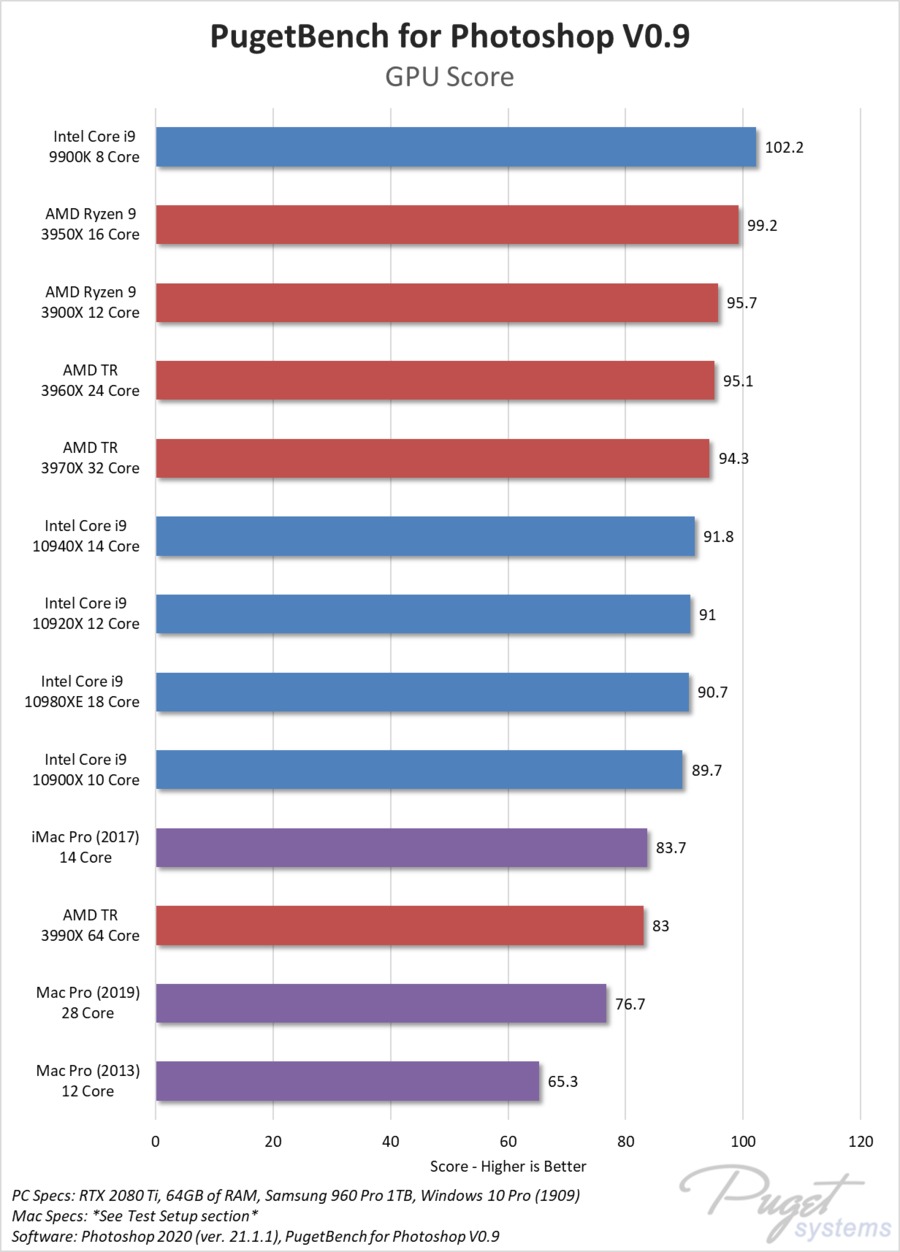 Photoshop is an interesting application to look at since in most cases, it does not take advantage of CPUs that have a large number of cores. That means that the 28 cores in the Mac Pro are not being used to its full potential, but neither are the 18, 32, or 64 cores that are found in some of our PC configurations.

Here, it is all about the per-core performance of the system which is determined largely by the maximum Turbo frequency as well as the processor's architecture. In the end, the result is that the $20k Mac Pro with 20 cores performs on par with the much less expensive 14-core iMac Pro. Many of the PC configurations are within a few percent of this result as well, although the Intel Core i9 9900K, AMD Threadripper 3960X/3970X, and AMD Ryzen 3900X/3950X CPUs are all around 10% faster than the Mac Pro.

Mac Pro (2019) vs a PC Workstation for Photoshop

Since Photoshop is largely unable to take advantage of higher CPU core counts, there often isn't much of a difference between most modern mid/high-end CPUs – and that applies for a Mac just as much as it does for a PC workstation. Overall, if Photoshop is your primary concern, you can get about 10% higher performance from one of our $4,200 Puget Systems workstations with either an AMD Ryzen 3900X or Intel Core i9 9900K compared to the $19,599 Mac Pro (2019) we tested.

Now, is 10% going to be a game-changer for your workflow? Probably not – it is right on the edge of what you might be able to notice in everyday work. The main takeaway here is not necessarily the performance alone, but rather how much you have to pay to get it. Even if you forget the Mac Pro and go with the much more reasonably priced iMac Pro, you are still likely to pay about twice the cost for equivalent performance.

Keep in mind that the benchmark results in this article are strictly for Photoshop and that performance will vary widely in different applications. If your workflow includes other software packages (we have similar articles for Premiere Pro and After Effects), you need to consider how the system will perform in those applications as well. Be sure to check our list of Hardware Articles to keep up to date on how all of these software packages perform with the latest CPUs.