In After Effects, Apple's iMac Pro and newer Mac Pro line simply don't hold up versus a PC workstation. Compared to just a $4,000 PC using a Core i9 9900K, the $20,000 Mac Pro we tested ended up being about 5% slower overall. And if you bump up the CPU to an AMD Threadripper 3960X 24 Core, a PC should be about 18% faster overall while still only being just over a quarter the cost.

With an application like After Effects where you can distribute renders across multiple machines using plugins like BG Render Max or RenderGarden, this means you can literally decrease your render times by up to 4-5x by purchasing multiple PCs instead of a single Mac Pro and using network rendering to split up the render.

Thanks to our friends at Linus Media Group (creators of Linus Tech Tips), we have finally been able to get our hands on one of Apple's new Mac Pro workstations for testing. While I may or may not have thrown out my back lugging the system up a flight of stairs (it weighs a ton!), there is no doubt that the Mac Pro is a very slick and sturdy machine. But what we are always interested in is exactly how well it performs in real-world applications like After Effects.

Anytime we do Mac vs PC testing, things can easily become a bit heated in our comments section, so we are going to largely side-step the question of whether you should use a Mac or a PC. Here at Puget Systems, we rarely try to outright convince anyone to move from Mac to PC, but rather take the standpoint of offering as much information as we can so that you can make an informed decision for your situation. If your workflow is better on a Mac, that is great! But if you are ready and able to take advantage of the higher performance, lower cost, and greater customization of a PC and want to work with a company that is intimately familiar with the transition from Mac to PC, we are here to help! 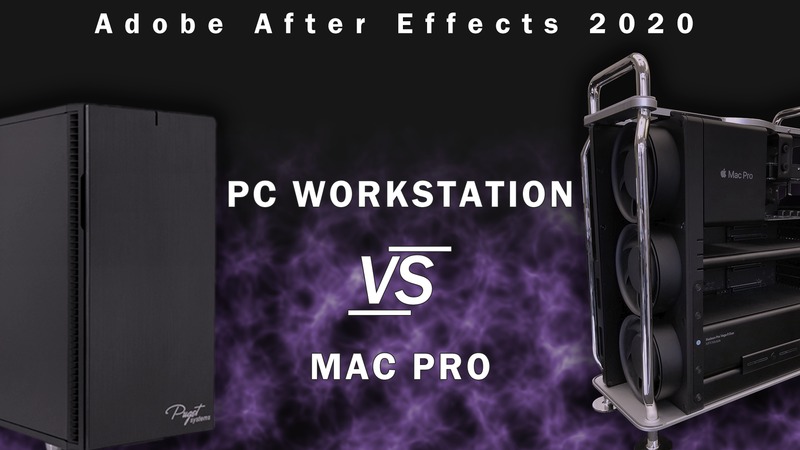 In this article, we will be examining the performance of a new 2019 Mac Pro in After Effects compared to a range of PC workstation configurations using AMD Threadripper, AMD Ryzen, Intel X-series, and Intel 9th Gen processors. In addition, we will be including an iMac Pro as well as a previous generation Mac Pro as additional reference points. If you are interested in how the Mac Pro compares in other applications, we also have other articles for Photoshop and Premiere Pro available on our article listing page.

In order to see how each of these configurations performs in After Effects, we will be using our PugetBench for After Effects V0.9 benchmark and After Effects 2020 (17.0.5). This benchmark version includes the ability to upload the results to our online database, so if you want to know how your own system compares, you can download and run the benchmark yourself.

However, keep in mind that some of the configuration options for the Mac Pro we have are not going to do much for After Effects. For example, the dual GPUs likely won't increase performance much, so you could save $2,800 and get a single Radeon Pro Vega II. The 28-core CPU may also be overkill for After Effects, and a more reasonable option can save you anywhere from $1k to $7k.

Feel free to skip to the next section for our analysis of these results to get a wider view of how each system performs in After Effects.

After Effects has been fun to look at over the years since it used to be very well threaded, but in 2015 Adobe shifted their focus towards GPU acceleration instead. This paid off for most users since GPUs tend to be much more affordable than high core count CPUs, but that does mean that in most workloads, After Effects tends to favors CPUs with better per-core performance than one with a higher number of cores.

However, even though that is the case in a general sense, the AMD Threadripper 3960X 24 Core and 3970X 32 Core both do extremely well, beating the (admittedly much more affordable) Intel Core i9 9900K by about 12%. But this isn't about Intel vs AMD, but how the new Mac Pro compares to a PC workstation.

If we forget about price, the Mac Pro does OK - coming in right at the middle of the pack. It is overall 14% faster than the 14 Core iMac Pro we have available for testing, but at a $13,000 price premium that means you are paying almost $1k for each percent of performance increase. Compared to our Intel Core i9 9900K configuration, the Mac Pro is about 5% slower for roughly a 5x increase in price. It does a bit better for rendering (and conversely a bit worse for live playback), but if render times are a problem for you, you can just get 5 PCs with Core i9 9900K CPUs and use AERender to distribute that render across each system for a ~5x increase in performance at the same price.

If you are looking for the best performance from a single system, our AMD Threadripper 3960X configuration (which should cost roughly $5,500) is about 18% faster than the 28 Core Mac Pro.

Mac Pro (2019) vs a PC Workstation for After Effects

While Macs often perform fairly well, in After Effects there is simply no argument that a PC workstation is both faster and significantly less expensive. Compared to the $20k Mac Pro we tested, a $4k PC using an Intel Core i9 9900K and NVIDIA GeForce 2080 Ti ended up being about 5% faster overall, while a $5.5k PC using an AMD Threadripper 3960X is about 18% faster. Even compared to the much better priced iMac Pro, a PC that costs $1K less is going to be about 35% faster.

What this means is that you can get the same or faster performance from a properly configured PC at a quarter (or less) the cost of a Mac Pro. With an application like After Effects where you can distribute renders across multiple machines using plugins like BG Render Max or RenderGarden, this isn't even about just getting similar performance at a lower price point. You can decrease your render times by 4-5x by purchasing multiple PCs and using network rendering to split up the work between each system. This only improves render performance (not live playback), but also gives you a ton of flexibility to have renders running on multiple machines while simultaneously working on other comps on your primary workstation.

Or, you can simply save that $15k and spend it on a new car, home remodel, or a really, really fancy vacation.

Keep in mind that the benchmark results in this article are strictly for After Effects and that performance will vary widely in different applications. If your workflow includes other software packages (we have similar articles for Photoshop and Premiere Pro), you need to consider how the system will perform in those applications as well. Be sure to check our list of Hardware Articles to keep up to date on how all of these software packages perform with the latest CPUs.

PugetBench for After Effects