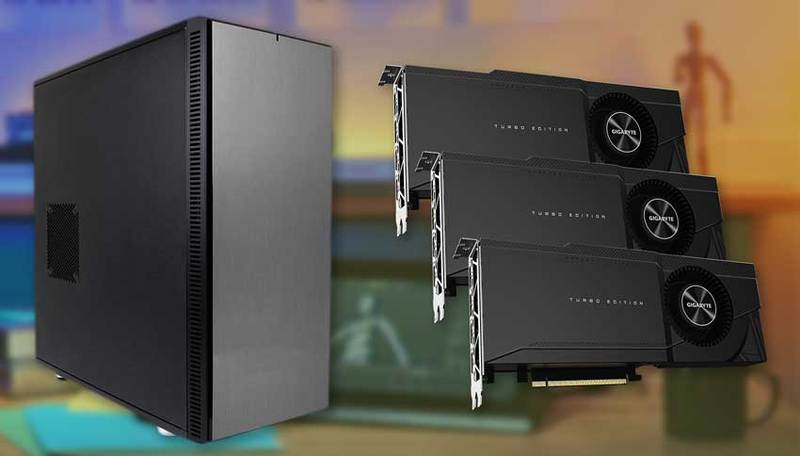 Auburn, WA (October 30, 2020) - Puget Systems (www.pugetsystems.com) today announced it has completed designing, testing, and building the industry’s first custom workstations with support for up to three of the newly-launched NVIDIA GeForce RTX 3090 24GB GPUs. Announced earlier this month to much industry fanfare, the NVIDIA GeForce RTX 3090 24GB is the fastest GPU on the market. According to NVIDIA, the GeForce RTX 3090 GPU offers up to 2x the performance and 1.9x the power efficiency over the previous Turing-based generation. The GPUs take advantage of the second generation of NVIDIA RTX™ to provide unprecedented levels of real-time ray tracing and AI gaming.

Puget Systems lab technicians, through extensive and thorough testing, determined that in many GPU-intensive workflows, such as content creation and scientific computing and where heavy rendering is required, the need for additional RTX 3090 GPUs was substantial. They also determined that, with proper configuration, a workstation with multiple GPUs would deliver a level of performance never before experienced.

Puget Labs used a number of varied benchmark tests to gauge performance benefits of leveraging multiple RTX 3090 GPUs, including the OctaneBench, V-Ray Next, Redshift and the PugetBench for Davinci Resolve Studio GPU Effects benchmarks. In their testing, they found a more than 300% performance increase in workstations configured with three RTX 3090s. The graph below shows the performance gains with one, two and three RTX 3090 GPUs.

Further testing determined that, depending on the application, using multiple GPUs can give users a substantial boost to performance. Rendering and AI/ML development are often the greatest beneficiary of these types of workflows, with rendering engines like OctaneRender and V-Ray Next giving almost perfect scaling with dual and triple GPU setups. Details of Puget Systems' extensive testing of multiple NVIDIA RTX 3090 GPUs can be found here: https://www.pugetsystems.com/labs/articles/Quad-GeForce-RTX-3090-in-a-desktop---Does-it-work-1935/

Puget Systems custom workstations with triple RTX 3090 are available for immediate configuration on the recommended systems for OctaneRender, V-Ray, Redshift, DaVinci Resolve, and Machine Learning Development. To learn more or to speak with one of our technology consultants, please visit www.pugetsystems.com.