Recently, "Tomasz Odwald" on Twitter noticed that a number of hardware reviews reported very different results in Cinebench R15 with the new Core i7 8700K CPU:

Speculation in the Twitter thread range from different RAM speeds to differences in room temperature, but in our experience "SirNoct_" is actually the closest with their answer of "It could be because of overclocking or some other type of hardware". If you look at a number of reviews for the Core i7 8700K and compare both the Cinebench multi-core score and the motherboard used, you will get the following:

Sorting by Cinebench score makes the cause of the different results pretty obvious. Asus boards score high, Gigabyte scores low – except when Overclock3D diabled Multicore enhancement in the BIOS. In our experience, the issue is not that Gigabyte boards are inferior but rather that Asus is auto-overclocking without informing the user. This is something we first noticed on X99 Asus boards, but it carried over to X299 and is now apparently an issue on Z370. To be clear, we are not just relying on these reviews – we've seen the same behavior ourselves while qualifying motherboards from Gigabyte, Asus, and MSI for use in our product line.

The cause of this is easier to understand if we first explain how Turbo Boost 2.0 works on modern Intel CPUs. In short, Intel CPUs with Turbo Boost are supposed to run at specific speeds depending on the number of cores that are being loaded. Using the new Core i7 8700K as an example, you should see the following core frequencies:

Factors like thermal and power limits can affect these numbers, but in most cases this is how fast a Core i7 8700K should run under different cores loads. The problem is that Asus in particular tends to take this as a very loose guideline rather than a hard specification. In fact, if you leave everything on "Auto" in the BIOS, Asus boards tend to run the CPU at the max single core Turbo frequency even when all the cores are loaded. So in an application like Cinebench that loads all the cores, an Asus board might be running the Core i7 8700K at 4.7Ghz on all cores instead of the 4.3GHz that it should be. This is by clearly overclocking since the BIOS will not only be upping the CPU frequency well beyond Intel's specifications, but will also be increasing the CPU voltage to match.

On a 6 core CPU like the Core i7 8700K, the difference between running at 4.7GHz versus 4.3GHz on all cores works out to be about a 10% difference assuming perfect scaling across multiple CPU cores. Most software is nowhere near perfect at using multiple cores, but Cinebench (and 3D rendering in general) does scale extremely well and it is no coincidence that the reviewers using Asus boards posted results that are almost exactly 10% faster than those using Gigabyte boards.

To be fair to Asus, this is an issue we have been seeing with increasing frequency on a number of motherboard brands. In our experience, Gigabyte tends to be pretty close to spec after launch, although we have had to work with them a number of times to get BIOS fixes on pre-launch BIOS versions. MSI also has some issues pre-launch, but they seem to favor underclocking rather than overclocking. EVGA we don't have a huge amount of experience with, but for the boards we carry we have found them to usually be pretty on target and don't underclock or overclock.

While we don't have proof, we believe that this kind of overclocking without informing the user may very well be a factor in the reported X299 VRM overheating issues. It also makes us very concerned about the recent report from ExtremeTech that

If we can no longer be sure what speeds Intel CPUs should be running at under different loads, how can we be sure that motherboard manufacturer are not auto-overclocking our CPUs without our consent just to make their products look better than their competitors?

The good part is that at least on Asus boards, this "feature" can usually be easily fixed by either disabling "MultiCore Enhancement" or by changing the CPU Core Ratio setting in the BIOS from Auto to By Core Usage. If you are a hardware reviewer who happens to read this post, we highly recommend including in your testing a verification that the CPU is actually running at the speeds it is supposed to be. This is an issue we see all the time with Asus boards, but it does pop up on other brands as well – especially when using pre-launch or early BIOS versions.

Edit 10/8/2019: We forgot about "Multicore Enhancement" when we first published this article which is another BIOS setting that can also result in auto-overclock. Overclock3D actually has great explanation of this in their review and they call it out specifically in their charts as an overclocked result. The odd thing about this setting is that in our experience it is not always the culprit of auto-overclocking. It often is, but we also have found that we need to change the CPU Core Ratio as well before the CPU will run at stock speeds. 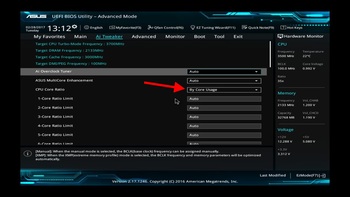 Here at Puget Systems, the method we use to verify that a CPU is running at the proper speeds is to use an application that can monitor the individual CPU core frequency (not just the maximum or average) such as CoreTemp and combine it with Prime95 to load the cores. Just limiting the thread count in Prime95 won't cut it since it can randomly bounce around the different cores, so we instead leave it on the maximum thread count and use Windows affinity to manually define which cores it is allowed to run on. This way, you can verify the all-core frequency as well as the single and other multi-core frequencies. This is especially useful for X299 CPUs to ensure that Turbo Boost 3.0 is working properly on the two strong cores which is an extremely common problem on X299 boards if Turbo Boost 3.0 is left in "Native" mode.

Really, this whole issue is caused by three factors:

The vast majority of hardware reviewers are likely not even aware of the possibility that they might be testing on auto-overclocked CPUs and to be fair, this hasn't been a major issue until fairly recently. However, this kind of testing is something we've been doing on all our workstations for years and we would love to see it become a regular part of hardware reviews as well.