Skip to content
Always look at the date when you read an article. Some of the content in this article is most likely out of date, as it was written on October 19, 2018. For newer information, see our more recent articles.

In old versions of After Effects, it was extremely good at utilizing a high number of cores – but things changed when Adobe started adding support for GPU acceleration. Being able to utilize the GPU typically results in much higher overall performance for most AE users, but unfortunately (or fortunate if you consider your wallet) it meant that AE was no longer able to make effective use of a high number of CPU cores. Core count can still make a difference if you utilize the Cinema 4D 3D Renderer, but for most tasks the performance of each individual core is more important.

With the new 9th Gen Intel Core Processors, there are a number of improvements including a small frequency bump and an increase in core count. Where the current top-end consumer Core i7 CPU (the Core i7 8700K) has only 6 cores and a max Turbo of 4.7 GHz, the Core i7 9700K and i9 9900K both have 8 cores and a 4.9-5.0 GHz max Turbo frequency. Because of this blend of both a higher core count and a higher operating frequency, these CPUs should fare very well in After Effects but the only way to know for sure is to put them through our After Effects benchmark suite. 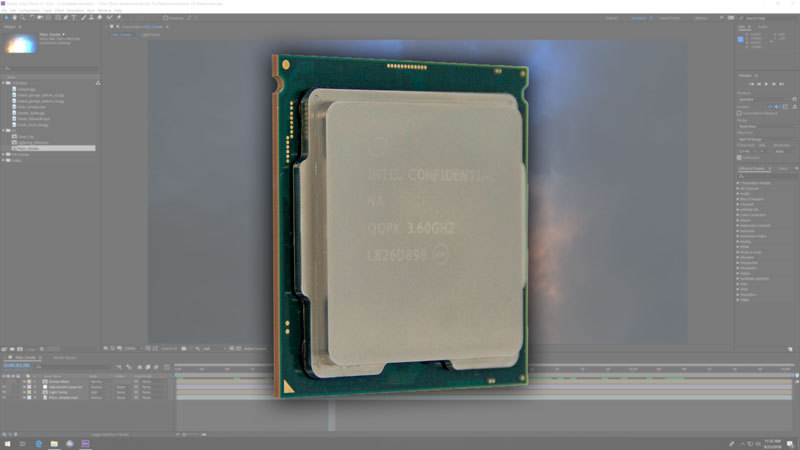 While benchmarking the i7 9700K and i9 9900K against the i7 8700K is likely the most direct comparison we could make, we also wanted to see how these new CPUs stack up against a number of other processors. AMD vs Intel is always a popular discussion, so we included the Ryzen 7 2700X – which tends to be cheaper than either of these new CPUs – as well as the Threadripper 1920X which is similar in price to the i9 9900K. To get an idea of whether or not purchasing a more expensive Intel CPU would give you a notable increase in performance, we also include the i7 7820X and the i9 7900X. 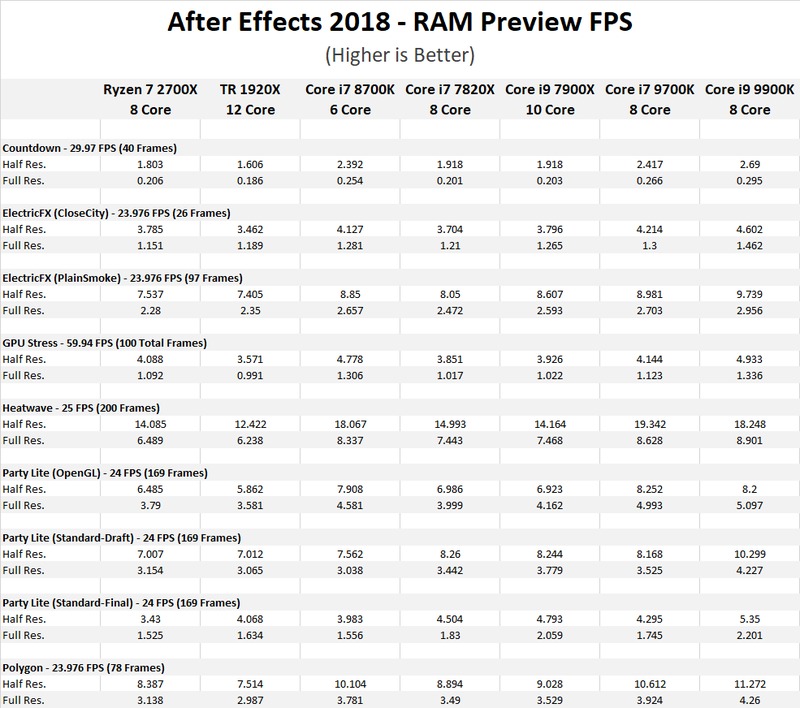 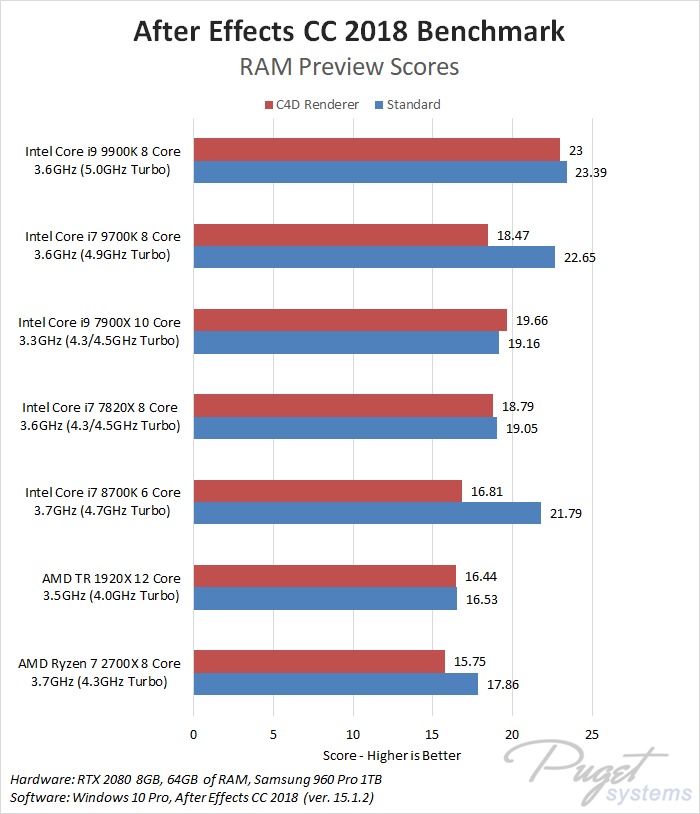 Starting with the standard projects (shown in blue), the i7 9700k and i9 9900K are faster than any other CPU we tested, but that only works out to being 4-7% faster than the Core i7 8700K. This certainly isn't nothing, but it will be hard to notice in the real world. 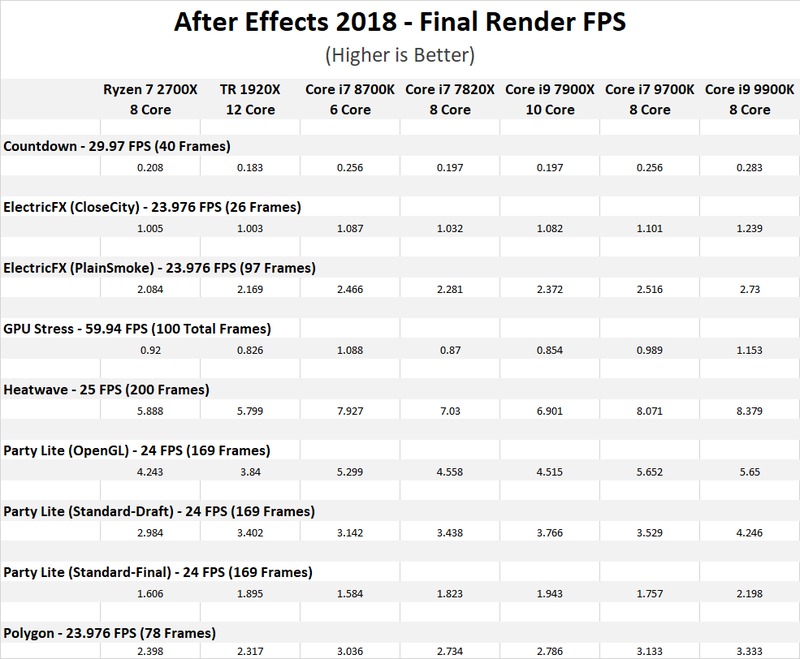 Once again, since the results will vary based on whether or not you utilize the Cinema 4D CPU renderer, we have separated our testing results between "standard" projects and those utilizing the C4D renderer: 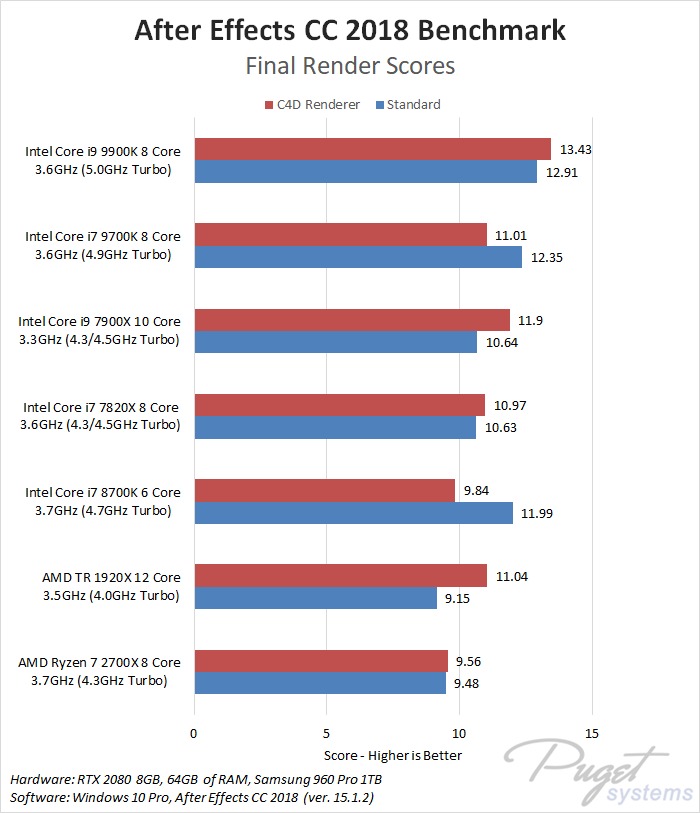 Are the 9th Gen Intel Core Processors good for After Effects? 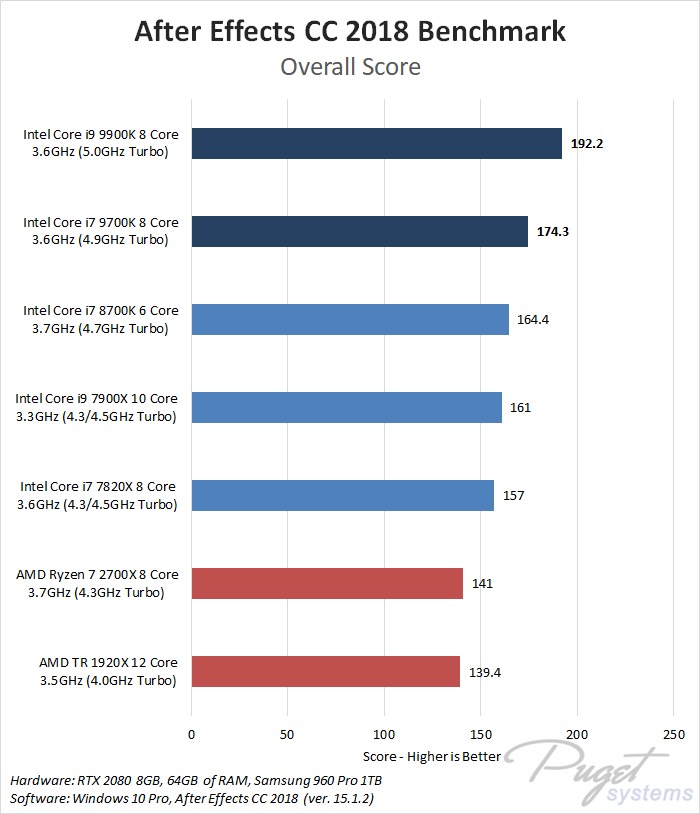 Overall, the new 9th Gen CPUs from Intel are great for After Effects. The i9 9900K in particular is terrific as it is not only the best for standard projects, but it actually matches the much more expensive Intel X-series CPUs when using the Cinema 4D rendering engine. The biggest issue with these CPUs is not their performance, but rather the 64GB RAM limitation of the Z370/Z390 platform they use. Many AE users benefit greatly from having more system RAM which is the only reason we may still recommend an Intel X-series CPU in some situations. It has been reported by Anandtech that the i9 9900K may support 128GB of RAM in the future, but we will have to see if it ends up being stable or if the 32GB RAM modules will be at all cost effective.

For standard projects, the Core i7 9700K is about 4% faster that the Core i7 8700K but that rises to 10% faster if you use the C4D rendering engine. While this is likely not worth a straight upgrade from the i7 8700K, if you are already in the market for a new AE workstation the i7 9700K is a solid choice.

The Core i9 9900K is more expensive than the i7 8700K, but in exchange we saw an 8% performance increase with standard projects and a massive 37% performance increase when using the C4D rendering engine. This makes the i9 9900K an incredibly versatile CPU for After Effects as it is not only the best for standard projects, but also stands toe to toe with much more expensive CPUs when using the C4D renderer.

If you are interested in how the 9th Gen Intel Core Processors perform in other applications, be sure to check out our recent Processor articles as we have a number of other articles for looking at the i7 9700K and i9 9900K.