Can you game on an NVIDIA Quadro GPU?

Here at Puget Systems, we sell a wide variety of systems for an equally wide variety of uses. One situation we come across fairly regularly is a customer who needs a Quadro card for their professional work - be it AutoCAD, Maya, or any other application where a workstation card is highly recommended - but they still want to be able to play games in their downtime. They could purchase a second system just for gaming, but why spend that money if they can just use their existing workstation?

Workstation-class hardware like NVIDIA Quadro video cards tend to receive a really bad rap in the gaming community because the cost-to-performance ratio is not anywhere near as good as the GeForce cards that are designed and optimized specifically for gaming. Some have even gone to the point of claiming that you cannot play games on NVIDIA Quadro video cards at all! There is a kernel of truth to this - gaming cards will perform better in games for a much lower price. But saying that you cannot game on a workstation card is completely false. While it used to be true that workstations cards didn't support gaming technologies like DirectX or PhysX, modern Quadro cards no longer have this limitation. 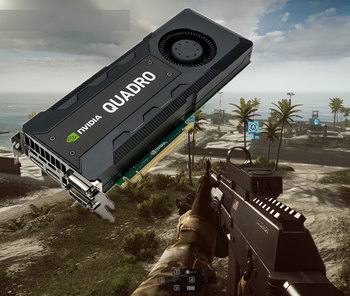 What we want to show in this article is exactly what kind of gaming performance you can expect from Quadro cards compared to their GeForce counterparts. To do this, we first need to look at the hardware specifications for the latest Quadro cards and find their closest matching GeForce equivalent:

In order to accurately measure how well NVIDIA Quadro cards perform in games, we want to compare a couple of Quadro cards against their closest GeForce equivalent. While we could use the GPU architecture itself (which includes the GPU core and number of CUDA cores) as a way to find the closest equivalent card, Quadro cards tend to have a much different core frequency and lower memory bandwidth than their GeForce counterparts. For this reason, we will instead be using the GPU's theoretical floating point performance in GFLOPS (which is essentially the core frequency times the number of CUDA cores) to determine which GeForce card we should compare to the Quadro cards.

It is worth pointing out that these are not perfect matches and in some cases the difference in theoretical performance is still as large as 9%. Still, this is about as close as you can get and should be close enough to give us something to work with. 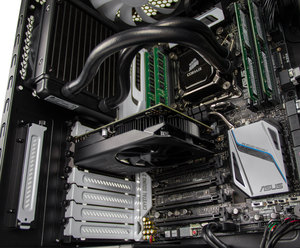 To see how the Quadro K2200 compares to the GeForce GTX 750 Ti we ran five different game benchmarks with the settings configured to give us an average FPS of around 60 with the GTX 750 Ti. Since we are more concerned about relative performance than the raw FPS numbers, we will be presenting the results as a percentage of the GTX 750 Ti's performance. 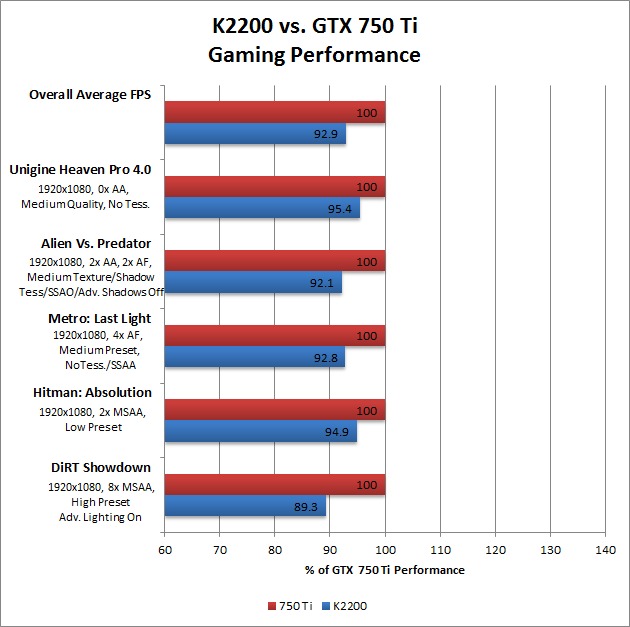 There are two things that could account for the lower than expected performance from the Quadro K2200. First, one specification in which the GTX 750 Ti beats the K2200 is in memory bandwidth; the GTX 750 Ti is about 8% faster than the K2200. However, we don't believe that the memory bandwidth alone should make this much of a difference.

What is likely causing the performance discrepancy is the GeForce driver that the GTX 750 Ti uses. This driver has plenty of optimizations specifically for gaming and the Quadro K2200 is simply not getting those benefits since it uses the Quadro driver instead of the GeForce driver.

To see how the Quadro K5200 performs, we will be running the same five gaming benchmarks only with the settings changed to achieve approximately 60 FPS with the GTX 770. 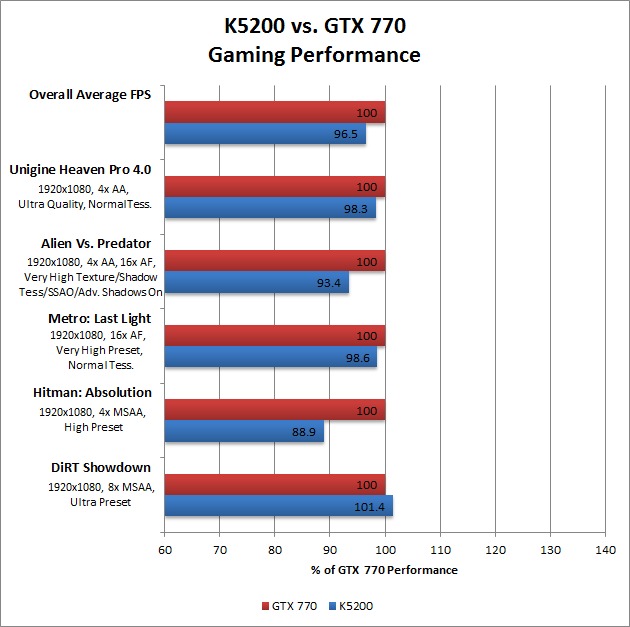 On average, this makes the Quadro K5200 only 3.5% slower than the GTX 770 versus the 5% we expected based on specifications alone.

To answer the original question of this article: Gaming is indeed entirely possible with a NVIDIA Quadro card. GeForce cards are, of course, a much better value given the high cost of Quadro cards, but if you already have a workstation with a Quadro card you shouldn't be limited in terms of what games you can play. All modern Quadro cards support technologies like DirectX and PhysX, so you should not run into issues running the vast majority of PC games.

As for what kind of gaming performance you can expect from a Quadro card, a lot of it is going to depend on the games you will be playing. From one game to another, we saw fluctuations in relative performance as high as 11%. However, based on our testing and years of experience working with Quadro video cards, we can make the following rough estimations of Quadro gaming performance: 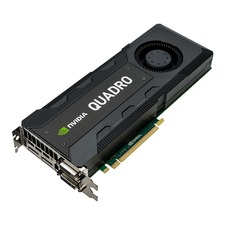 These are very much broad estimations, but we feel that it should at least be in the right ballpark for each card. If you are happy with this performance then you should have no problems gaming with a Quadro video card. However, if you want better gaming performance than your current (or planned) Quadro card can provide, it may actually be cheaper to get a dedicated gaming system than to upgrade your Quadro card due to the cost of higher-end Quadro cards.