Anyone who has used a digital camera or smart phone has probably seen flash memory cards: small, removable devices on which a variety of data can be stored (depending on the device using it). In many cases the most important factors for flash memory are size - how many files can be stored on it - and reliability... but in some cases the speed at which data can be transferred to or from the memory is also critical.

Digital photography is probably the best example of this. A professional, using a top-end DSLR camera, can easily shoot enough photos in one outing to fill several memory cards. Extracting the photos from those cards to a computer for editing can end up being a long process, and speeding up that process may be worth an investment when upgrading or purchasing a new computer.

There are two main options for getting data off a memory card: plugging the device it is in directly into a computer, or taking the memory card out and inserting it into a device that is dedicated to working with such flash memory; aptly named a ‘card reader’.

The speed at which data can be copied from a flash memory card is determined by two things: the device which is housing the memory and the memory card itself. Card readers, and indeed most memory-card-equipped electronics devices capable of plugging directly into a computer, utilize USB 2.0. It is found on just about every computer in use today, making it a standard that can almost be assured to work across the board. However, because of the age of the USB 2.0 standard higher-speed devices can end up having their performance limited

There is now an updated version of that ubiquitous interface which remedies the performance concerns: USB 3.0, which offers a ten-fold increase in raw bandwidth over USB 2.0.  That speed increase seems very appealing, but will current flash cards and readers be able to show any real-world benefit from it?  To answer that question we tested several card readers: our venerable ATech USB 2.0 card reader, the same one we’ve been using in system builds for years, along with an internal USB 3.0 reader from Koutech, an external USB 3.0 reader from Lexar, and a SATA-based reader from Addonics.

Going into this I had high hopes for the SATA-based reader, as that interface is used for hard drives and is known to offer very good performance... but it is not the same technology base upon which flash memory cards are built, and it showed in our attempts at testing. I was unable to get it to work reliably: depending on how it was configured it would either mis-read cards when inserted (not seeing the existing formatting) or simply not recognize that something had been inserted at all. If you did format a memory card in the device it would not see the full capacity, and then would not work in any other devices until formatted again through a different method.

As such the SATA reader was not able to complete the tests, and is a technology we cannot recommend. It is entirely possible this was just a defective sample unit, but the comparative complexity in setup alone gives it a major disadvantage: separate power and data cables, a jumper to enable or disable hot-swap functionality, etc.

What about the performance of USB 2.0 vs 3.0, though? To check that out, we ran a series of tests across two types of memory cards: Compact Flash (CF) and Secure Digital (SD).  High-speed versions of each were utilized to mimic what high-end photographers would be likely to have, along with more normal-speed cards to show what the average consumer might have access to.  Here are details on each card used, for reference:

The card readers used were as follows:
The ATech and Koutech units both work with a wide variety of memory card types, but the Lexar is limited to Compact Flash and Secure Digital (plus variants of both).  If you have a wide range of cards in different devices that definitely gives the former readers and advantage, but when it comes to high-performance memory cards they are almost exclusively found in the two formats supported by the Lexar reader.

In order to ensure as real-world of a testing environment as possible, each card was filled up with images by having it installed in a camera, formatted there, and then having pictures taken directly onto the cards.  The first 1GB worth of photos on each card was then used as the test group for that card, and copied over to the computer via the various card readers: 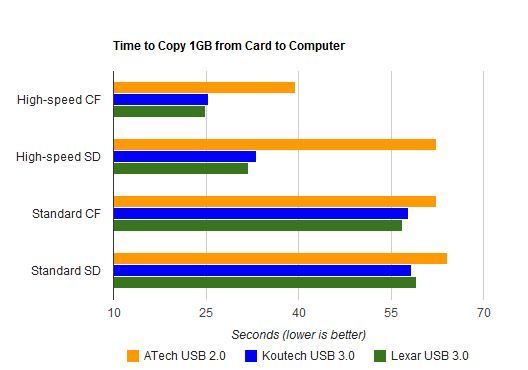 That tells the story of what most users would see: dramatic performance boosts, but only when using high-speed flash memory modules.  If using more affordable, standard-speed memory there is still a small boost - but nothing huge.

To get a more complete picture of what a high-speed card reader is capable of, though, we also ran tests using a standard benchmark: CrystalDiskMark.  We only ran sequential read and write tests, though, as that is generally what is being done with memory cards.  Random tests might be interesting, but the results would not correlate to most real-world usage.  To ensure fair results, memory cards were quick-formatted with FAT32 via Windows prior to each run of the test. 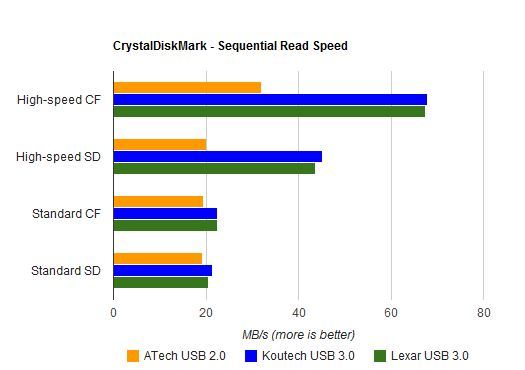 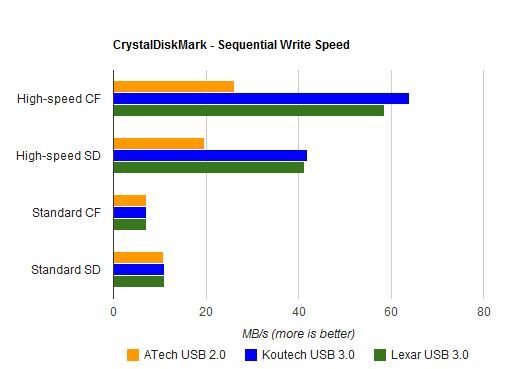 Those results line up with the first download test.  The conclusion from these results is that to really reap the benefits of USB 3.0 in a card reader you need to be using fast memory cards... but when doing so, the difference is clear.  Further, as flash memory technology continues to advance it should only get better!

While more mainstream memory cards didn’t see a massive performance increase there was a small boost to read speeds - so at least there is no reason *not* to go with USB 3.0, assuming your computer has the capability built-in (or it can be added easily & affordably).

Given the results we have shown above, the move to a USB 3.0 card reader could definitely be a benefit to some of our customers: specifically photographers using fast memory cards. As such we are going to pursue qualifying a USB 3.0 card reader to add to our line.  ATech is coming out with a new card reader soon, and we know from past experience that their units are reliable and fit our computers nicely.

Pending any additional testing and certification, we should be able to offer a USB 3.0 card reader on our systems in the near future.

The Koutech card reader we used in the testing portion of this article performed well, but the sort of USB 3.0 connection it requires is not ideal for use within a computer.  In our search for a comparable model with a better connection setup we found the Silverstone FP37, which looked like it fit our needs.  Upon testing it with CrystalDiskMark we found that performance was virtually identical to the Koutech as well: read speeds of 68MB/s with the high speed CF card, 45MB/s with the SD card - and write speeds at 65MB/s and 43MB/s, respectively.

Based on that data we are adding the Silverstone FP37 card reader to our lineup.  Not all of our motherboards support the internal USB 3.0 connection just yet, though, so if you want to get this card reader and are unsure if your desired configuration will support it please contact us!