Skip to content
Always look at the date when you read an article. Some of the content in this article is most likely out of date, as it was written on July 22, 2019. For newer information, see our more recent articles.

In our Puget Systems workstations, we typically stick to the RAM speed that is officially supported by a processor since it generally gives the best mix of both performance and stability. However, just like with more traditional CPU overclocking, there are certainly times that an application can benefit from having higher speed memory. This is not always going to be the case, but the difficult part is knowing whether the applications you use every day are ones that will benefit or not.

Today, we will be looking at a number of applications used by video editors to discover whether or not higher speed RAM gives a tangible bump in performance. 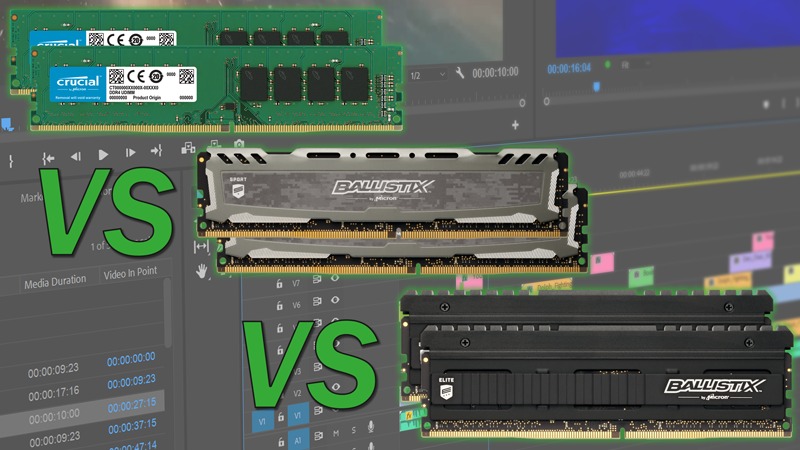 While we are going to primarily be looking at pure performance in this article, keep in mind that stability is a significant concern for any workstation. Getting an extra X% performance gain is always nice, but if it causes even minor system stabilities, that increase in performance can easily be wiped out with a single program crash or bluescreen.

However, whether or not higher frequency RAM is worth the potential stability tradeoff really depends on exactly how much the performance gain is and how much risk you are willing to take. Our testing and articles are primarily geared towards our customers who are overwhelmingly not the kind of people who want to tinker with their system – but we understand that our testing is also widely used as a resource for people who build their own computers.

To help answer whether higher frequency RAM is worth it, we will be looking at a range of applications including Premiere Pro, After Effects, Neat Video, and Photoshop with a number of CPUs and RAM speeds ranging from DDR4-2666 to DDR4-3600. In addition, we will also include one set of testing with 128GB of RAM since we have been curious if the newer 32GB RAM modules are any slower than the more standard 16GB modules.

Big thank you to Crucial Memory for providing the RAM used in this testing!

Note that most of our testing will be done with 4 sticks of dual rank RAM (higher capacity modules are almost always dual rank). This means that for each platform – both Intel and AMD – we will technically be overclocking once we get above DDR4-2666. In some cases, like Threadripper with 8 sticks, we would technically be overclocking with anything higher than DDR4-1866. However, since we don't have the time or resources to test every possible combination of RAM count/frequency/timing, we are going to make things easier on us and just stick with DDR4-2666 as the bottom end of our testing.

Something else to make note of is that we are only using 4x8GB for the DDR4-3600 testing. There are 16GB DDR4-3600 modules available from few manufacturers, but Crucial was able to generously provide the RAM for this testing and they currently only offer 8GB modules at this speed. This shouldn't affect performance since our benchmarks don't need more than 32GB of RAM, but there is the possibility that higher capacity DDR4-3600 RAM may show higher performance in our benchmarks.

While our benchmarks present various scores based on the performance of each test, we also wanted to provide the individual results. If there is a specific task that is a hindrance to your workflow, examining the raw results for that task is going to be much more applicable than our overall scores. Feel free to skip to the next sections for our analysis of these results if you rather get a wider view of how each type of RAM performs. 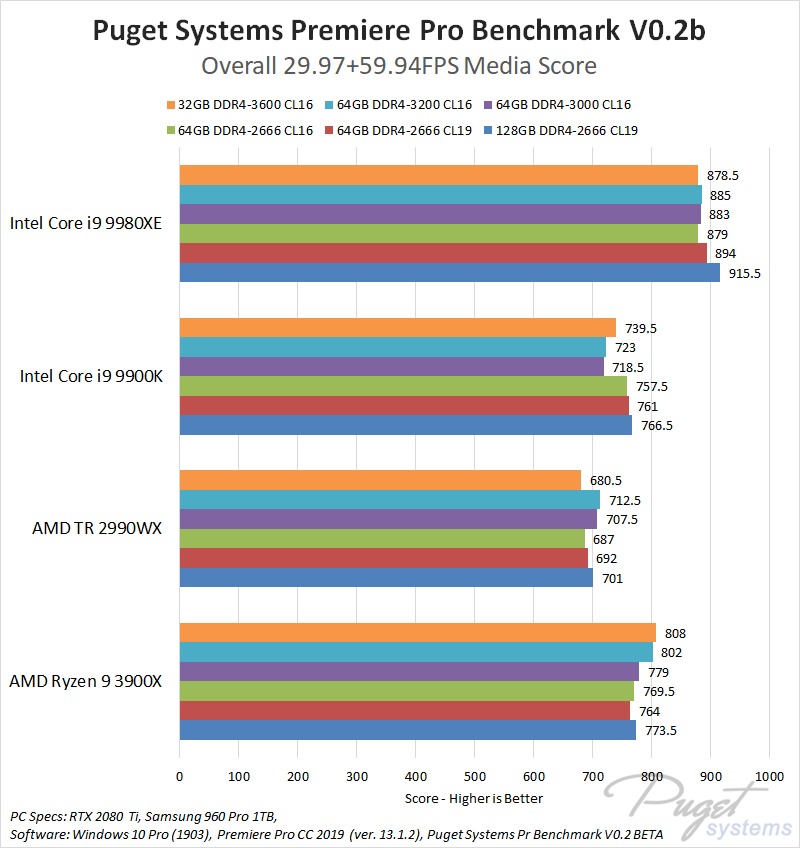 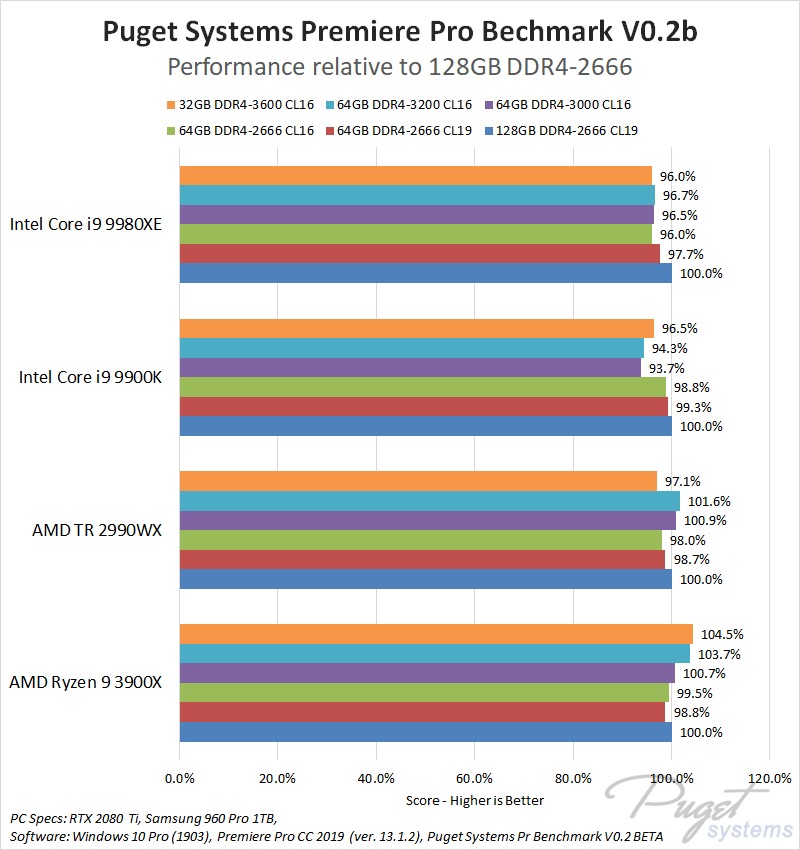 Starting off with Premiere Pro, the results are quite different than what we expected. Oddly enough, we actually saw slightly worse performance with the higher frequency RAM when using the Intel Core i9 9900K and Core i9 9980XE. The 9900K in particular saw up to a 7% performance drop with DDR4-3000 RAM, but recovered a bit with 3200 and 3600 RAM.

This is a very strange result that we honestly don't have a good explanation for. We ran our tests several times to make sure it wasn't an issue with a single run, but the results were consistent – DDR4-2666 actually was consistently slightly faster in Premiere Pro on Intel CPUs. However, one thing to keep in mind is that the current version of our Premiere Pro benchmark is still fairly new and we are not quite sure yet what the standard deviation is. There are some tests like 8K H.264 live playback where the performance appears to vary quite widely, while others are very consistent. This is part of the difficulty of testing real-world performance: it rarely is as smooth as a synthetic benchmark.

With AMD, the results are a bit more as we expected. On Threadripper, the RAM speed didn't affect performance much, but the new Ryzen 3900X did see a small gain in performance as we increased the speed of the RAM. However, it was only by about 4% going from DDR4-2666 CL16 to DDR4-3600 CL16. 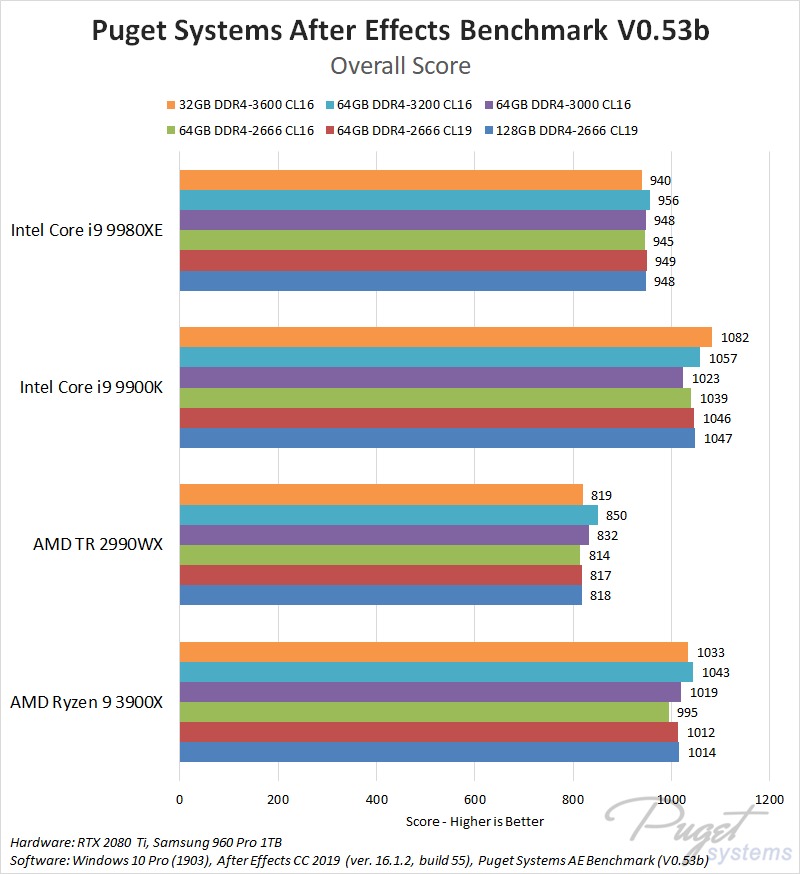 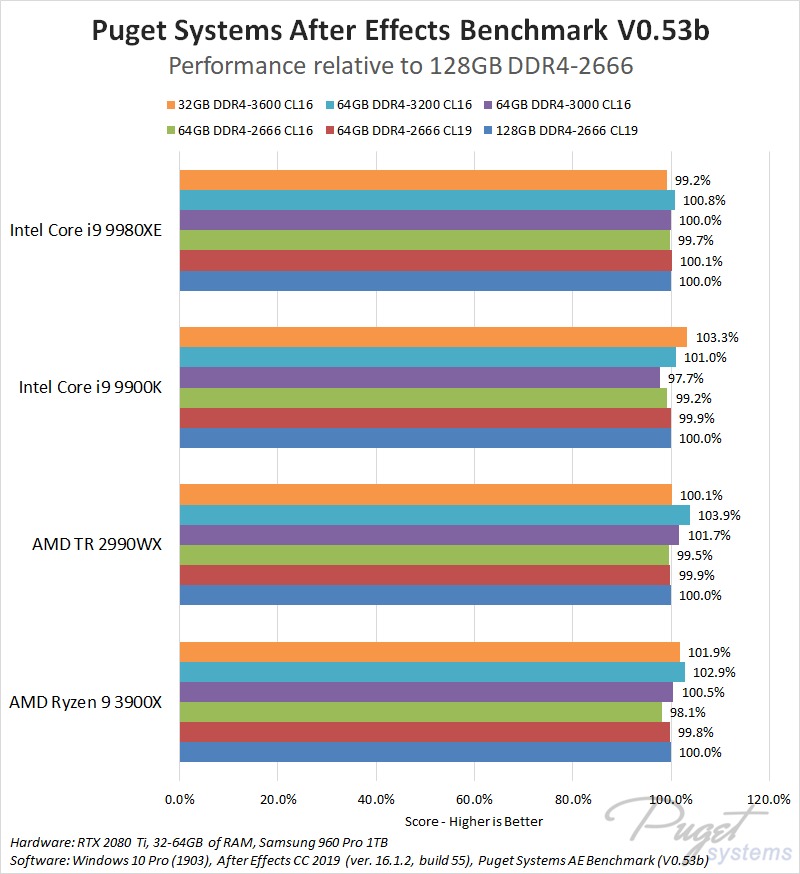 Our After Effects benchmark tends to have a margin of error right around 2%, and there were only a few isolated cases where we saw a performance delta larger than that. While you could cherry-pick individual results from the tests, overall it appears that RAM speed does not have a significant impact on performance in After Effects regardless of the CPU you use.

Something we do want to point out here is that in After Effects, the amount of RAM you have can make a huge difference since more RAM means you can have more frames cached in RAM Preview (which means less frames that have to be re-rendered). Our benchmark, however, is designed so that people with 16GB of RAM can successfully run it. So, while you want as much RAM as possible if you use After Effects, this is not reflected in our benchmark which primarily looks at render performance during RAM Preview and Exporting. 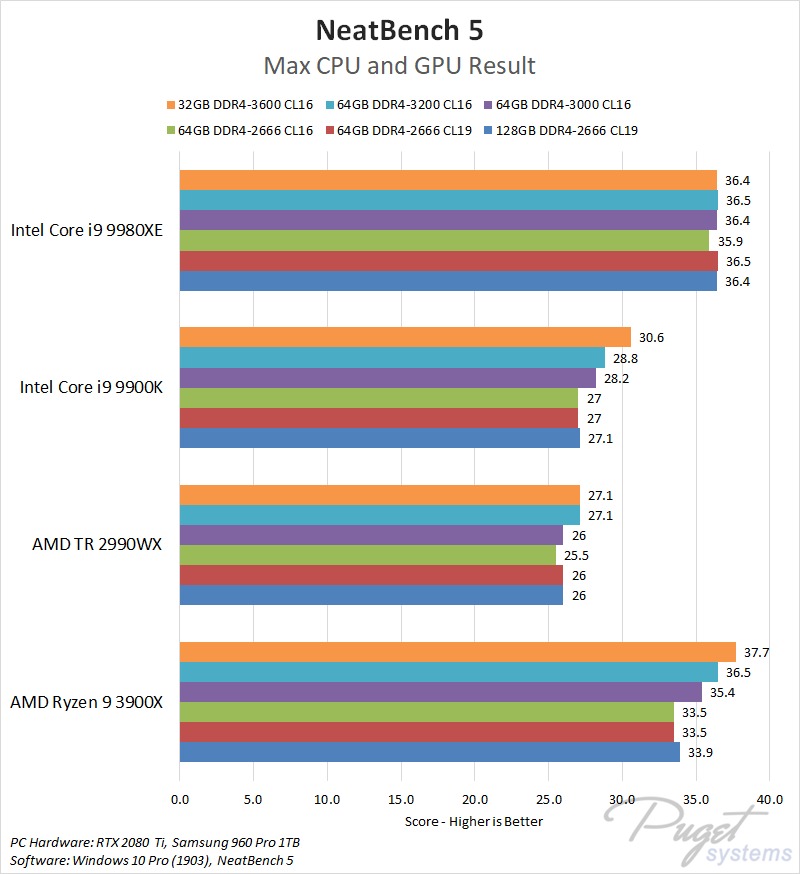 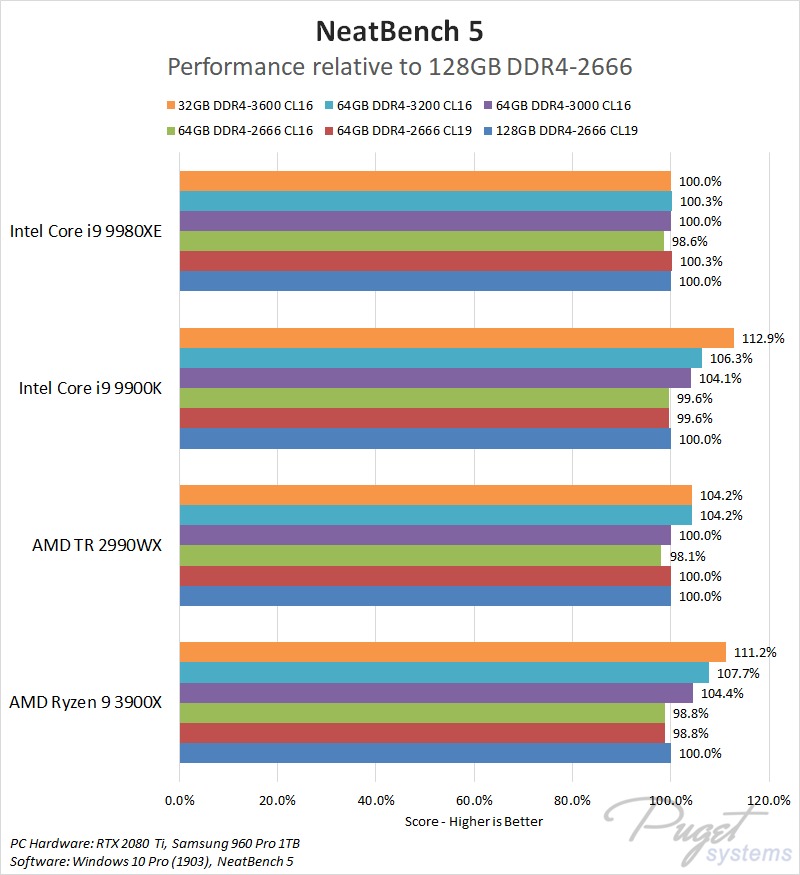 NeatBench 5 (which is the stand-alone benchmark for the popular noise reduction plugin Neat Video) easily saw the largest performance gains with higher frequency RAM out of all the applications we tested. The Core i9 9980XE still didn't see a benefit, but the Threadripper 2990WX did see a small ~4% gain when we got up to DDR4-3200 and DDR4-3600 RAM.

This is a pretty significant increase, although it is interesting that both the Core i9 9900K and Ryzen 9 3900X saw almost identical boost to performance with higher speed RAM. 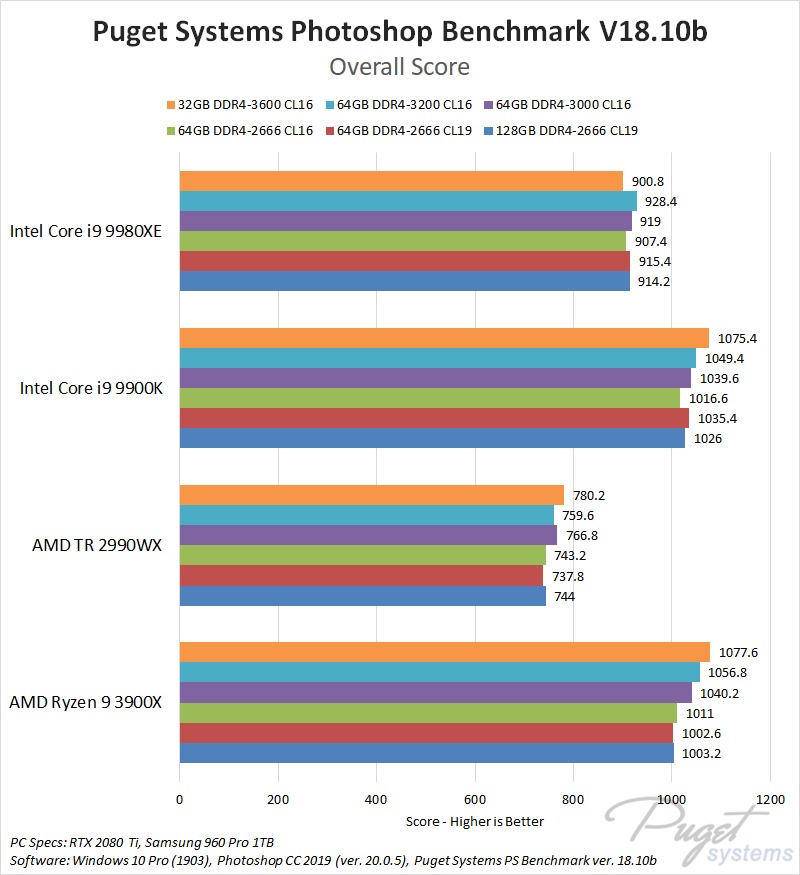 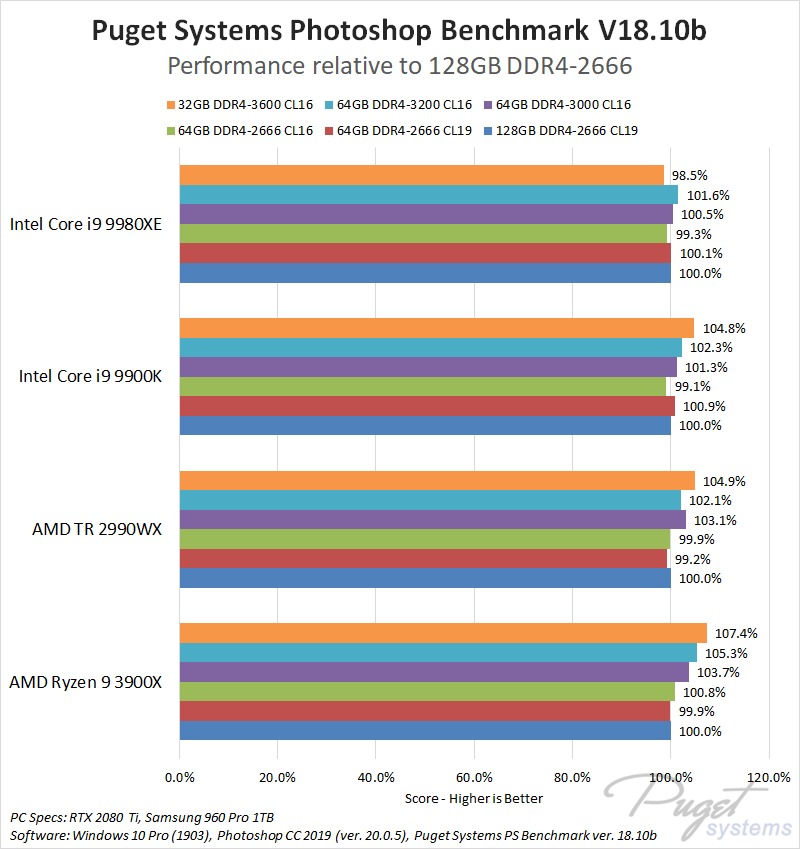 Photoshop may not be a true video editing application (unless you are one of those people that uses its rarely used video timeline features), but it is commonly used alongside Premiere Pro, After Effects, and similar apps so we decided to throw it into the mix.

While not quite to the same degree as Neat Video, Photoshop can definitely see some benefit from higher frequency RAM with select CPUs. The Intel Core i9 9980XE didn't see much of an increase in performance, but the AMD Threadripper 2990WX and Intel Core i9 9900K saw up to a 5% performance gain going from DDR4-2666 to DDR4-3600. The AMD Ryzen 3900X saw a slightly larger increase, with performance gains up to a 7.5% with DDR4-3600 RAM.

In our testing, we found that whether higher frequency RAM improves performance or not depends heavily on both the application and the CPU used. Some (Neat Video) showed a fairly substantial benefit going up to DDR4-3600 with both the Core i9 9900K and Ryzen 9 3900X processors. Others (Photoshop) also saw a benefit, but not to as significant of a degree. At the same time, both Premiere Pro and After Effects really didn't see a significant performance advantage with higher frequency RAM, regardless of the CPU.

While we primarily want to focus on pure performance in this article, a key consideration is also overall system stability and reliability. Using RAM that is beyond what is officially supported by your CPU is technically overclocking and carries many of the same risks as more "traditional" CPU overclocking.

This absolutely does not mean that higher frequency RAM will always be less stable, but it is going to depend highly on the quality of your RAM, motherboard, power supply, and other components in your system. However, even with some of the highest quality parts you can currently purchase (Crucial RAM, Gigabyte motherboard, EVGA PSU, etc.), we did see a noticeable increase in the number of times our benchmarks crashed as we used higher and higher frequency RAM. It is always hard to know what is to blame (our benchmark itself, early platform bugs, a single weak component, etc.), which is why we did not want to focus on the details of stability in this post.

Overall, our recommendation for most users is to stick with the RAM speed that is officially supported by your CPU in order to maximize the stability of your system. If you are looking to get every ounce of performance, however, there are some applications (Photoshop and NeatBench from what we tested) that can to potentially get up to ~13% higher performance with DDR4-3600 RAM. Just keep in mind that this performance is definitely not "free" – just like CPU overclocking, it is possible that it may cause more problems than the extra performance will solve and may require a bit of tinkering in the BIOS to get it stable over the life of your system.