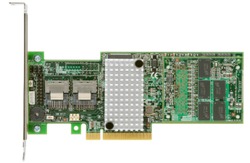 The Intel RS25DB080 is a second generation SAS-2/SATA III 6Gb/s RAID card featuring two 800MHz processor cores with 1GB cache memory. The card has connections for up to eight SATA III 6Gb/s hard drives via 2 SAS ports and fits into an 8x PCI-E slot. Like most current high-end Intel RAID cards, this card includes support for a battery backup module (AXXRSBBU9) as well as hardware-based keys that are used to unlock advanced features such as SSD Cache with FastPath I/O.

Full product specifications are below: 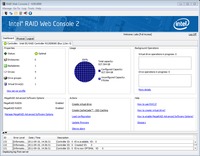 Drivers and software are available through Intel's Download Center and includes support for Red Hat, SUSE, Windows 7, Windows Server 2003/2008 and Windows Vista. Windows does not include a native driver for this RAID card, so if an OS is to be installed to a RAID on this controller a driver must be loaded during the install process. Conversely, if the driver is to be loaded into an already present OS, Intel does not include an installation package so the driver must be manually loaded through device manager. 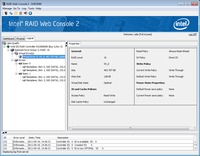 Intel provides both a command line tool as well as the Web Console 2 utility for RAID management. The Web Console 2 is a web-based GUI and from our experience is very reliable and easy to use. It allows for full customization of RAID arrays including RAID creation/deletion, RAID type, drive selection, stripe size, and I/O policies.

Overall, we had no problems locating and installing the drivers and software for this RAID card. RAID configuration similarly went without any problems through the Web Console 2 on our test Windows 7 machine.

Our test system specifications are listed below:


*All results are in MB/s


In single drive performance, the RS2DB080 gives us some disappointing results, having lower benchmark scores than any of our comparison controllers.


Once we start testing in a RAID configuration, the RS25DB080 starts to show some better results, although the read performance is lower than we would expect on a high-end RAID card.


In a 2-disk RAID 0 array, the results are finally better than the comparison LSI RAID cards, although performance is still lower than the other two Intel RAID cards.


In a 4-disk RAID 0 array, we see that the R225DB080 has much better read performance than the other cards, although the write performance is still lacking.


Moving on to a RAID 10 array, we again see a bit of a drop in performance compared to most of the other RAID cards. The results are still better than the LSI 9240-4i, but that card is intended to be used as an entry-level card, so that is not much of an accomplishment.


Finally, in a RAID 5 array we again see great read performance, although the write performance in this RAID type is very low at only 221.5 MB/s

Overall, we are a bit disappointed with the performance of this RAID card. In a few configurations (4-disk RAID 0 and 5) this card had the best read performance, but across the board the write speeds were much lower than we would like to see. Especially considering that the RS25DB080 is more expensive than the Intel RS2BL080, which is also an eight port RAID card, we would expect to see much better performance results.

In terms of usability, this RAID card works perfectly. But that is also true of the other similar Intel RAID cards on the market - namely the Intel RS2BL040 and RS2BL080 - as they both use the exact same management software. The RS25DB080 however does have better specs than the RS2BL080 as it has an additional 512MB of cache and a dual core processor. Just looking at our benchmarks however, this card showed worse performance than the other two Intel cards almost across the board. Except in specific applications where the extra 512MB of cache and dual core processor would be useful, we do not see any reason to use the more expensive RS25DB080 when the already-proven RS2BL080 has similar or better performance.

As a custom system builder, Puget Systems strives to find the best possible components for each of our computers. In the case of this RAID card, it did not measure up to our performance standards and we will not be including it in our product line. However, this type of testing is what helps us ensure that every computer we sell is reliable, powerful and top of the line. If you have any questions about our testing procedures, or the components we use in our computers, feel free to email us at info@pugetsystems.com