Skip to content
Always look at the date when you read an article. Some of the content in this article is most likely out of date, as it was written on September 19, 2014. For newer information, see our more recent articles. 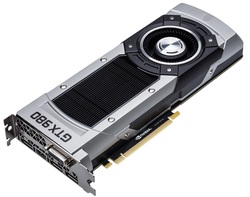 While every new component we sell goes through our extensive qualification process, we generally do not publish articles for components like video cards. This is simply due to the fact that review sites like Tom's Hardware and AnandTech already do a great job reviewing these parts and any article we write would have very little to add. However, every couple of years a video card comes along that has something interesting enough for us to break this trend and publish our qualification information.

The NVIDIA GeForce GTX 980 4GB is a very interesting card in that it really isn't that much faster than the cards already available, but it has a dramatically lower power draw – 85W less than the GTX 780 or GTX 780Ti. Full specifications for the GeForce GTX 980 are available below:

As for the physical card, it is pretty much identical to the reference NVIDIA GeForce GTX models that have been around for the last two generations as it utilizes the same rear-blowing fan design. Size wise, this card takes up two PCI slots and is exactly the same length and height as the GTX 780/780Ti.

On the top of the card there is a black plate the covers the entire PCB. As far as we can tell this is purely aesthetic and is not required to cool any hot chips. In fact, part of the plate can be easily removed – presumably to allow additional airflow to a card if you have two or more stacked right on top of each other.

Another interesting feature is the number of DisplayPorts present. While NVIDIA cards traditionally have 2 DVI ports, a DisplayPort and a HDMI port, the GTX 980 drops one DVI port in favor or an additional 2 DisplayPorts. DVI is still an extremely popular method of connecting displays, but with the rising popularity of 2K and 4K displays it really is time for HDMI and/or DisplayPort to take over. On the topic of 4K displays, it is also worth pointing out that the HDMI port on this card uses the newer HDMI 2.0 standard which finally adds support for 4K displays at 60Hz (HDMI 1.4 could only run a 4K display at 30Hz).

To benchmark the NVIDIA GeForce GTX 980 4GB, we used the following hardware:


To act as a comparison, we also included the NVIDIA GeForce GTX 780Ti 3GB in all of our testing. This isn't the exact card that the GTX 980 is intended to replace, but we wanted to test it against that fastest card from the previous GTX 7XX series. For the duration of our testing, the CPU fan was set to the standard QFan profile and the chassis fans were run at 5v.

The amount of power a component draws is a very important aspect when comparing two pieces of hardware. Since the amount of heat produced is directly related to the amount of power used, a lower power draw isn't simply a matter of being more "green", it actually means that the component will generate less heat and potentially be quieter (depending on the cooler) than its higher-wattage counterpart. 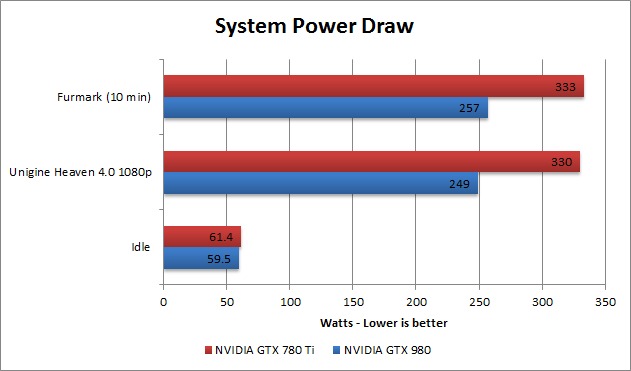 In our testing, the GTX 980 used only marginally less power than the GTX 780Ti at idle, but used a lot less power when gaming or when under 100% load. In fact, under load our test system drew about 80W less power using the GTX 980 than it did with the GTX 780Ti. Usually real-world testing doesn't line up exactly with the manufacturer specifications, but in this case the advertised power draw from NVIDIA appears to be pretty spot-on. 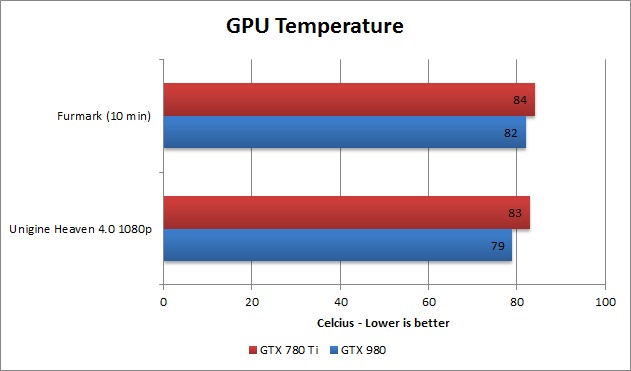 Since the power draw is so much lower on the GTX 980, we expect to see lower temperatures compared to the GTX 780Ti. While the GTX 980 is indeed cooler than the GTX 780Ti, the difference isn't as large as you might expect from a card that uses 85W less power. The reason for this is because pretty much every active cooler in a modern computer – be it a CPU cooler or GPU cooler – ramps its fan based on the temperature of the component it is cooling. 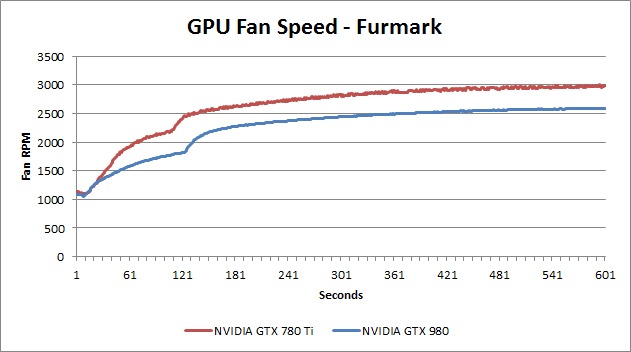 As you can see, during Furmark the fan on the GTX 980 runs about 400 RPM slower than the one on the GTX 780Ti. This may not seem like much, but it results in a pretty significant drop is noise levels. We aren't currently equipped to take extremely accurate noise readings, but subjectively we would say that the GTX 980 is really closer in terms of noise levels to a GTX 760 than it is to a GTX 780Ti or even a GTX 770. 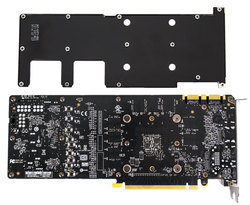 While the temperature readings that are reported from the GPU are extremely useful, we like to also use a thermal camera to see if there are any hotspots on a GPU that are not being adequately cooled. The GTX 980 made this a little difficult since it has a large plate over the top of the card, but upon close examination we discovered that this plate is purely aesthetic and is not required to cool any components. So for our thermal images we simply removed it – replacing the screws that was holding the heatsink on with shorter ones to ensure that the heatsink was still properly mounted.

More than the GPU temperature or fan speed logs, the thermal image really shows the impact of the GTX 980's lower power draw. Where the GTX 780Ti had spots that were as hot as 95C, the hottest spot on the top of the GTX 980 was only 84C. And as you can see from the image, the GTX 980 overall runs much cooler than the GTX 780Ti.

While we run benchmarks as part of our product qualifications, we are very willing to admit that we do not go crazy measuring the performance of a video card during our qualification process. Review site like Tom's Hardware, AnandTech, and many others do a terrific job benchmarking video cards and duplicating their work is simply not necessary in our opinion. We would much rather spend our limited time doing other testing that we feel will improve our systems in ways specific to our customers. However, we certainly do run a number of benchmarks and the results are very useful. 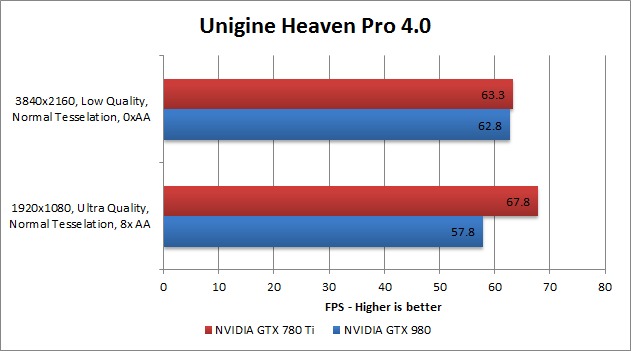 Unigine Heaven Pro 4.0 is our go-to 3D graphics benchmark. It is highly consistent and is a great indicator of performance for a number of games. What we found is that the GTX 980 is quite a bit slower than the GTX 780Ti at 1080p with about a 15% drop in relative performance. At 4K resolutions, however, the GTX 980 pretty much exactly matched the performance of the GTX 780Ti. The reason for this is not entirely clear, but it is likely due either to the additional VRAM on the GTX 980 or simply due to the changes found in the newer Maxwell architecture. 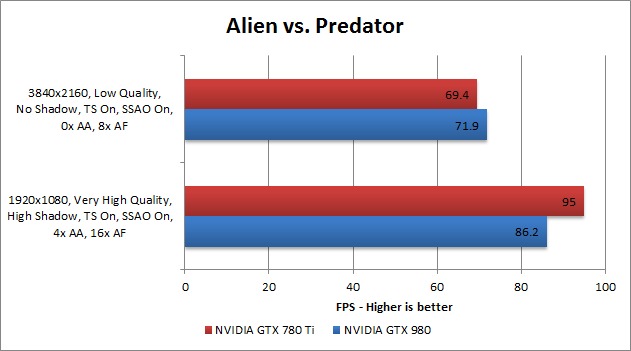 Alien vs. Predator is another staple in our benchmarking process and it shows very similar results as Unigine Heaven. The only difference is that the GTX 980 was actually faster at 4K resolutions than the GTX 780Ti rather than simply matching it. 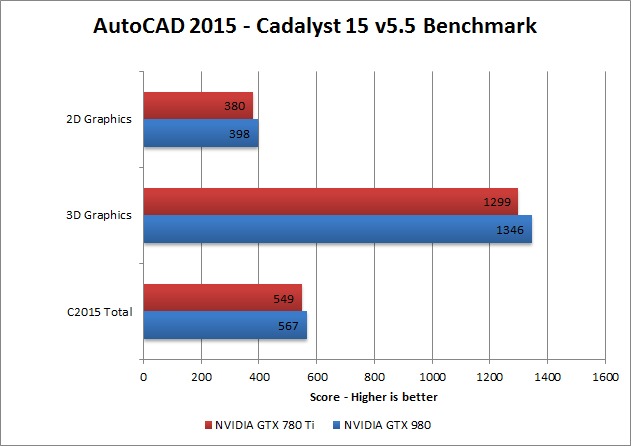 In addition to gaming, we like to test video cards using a number of professional applications. AutoCAD is a very popular 3D Modeling program and it shows some very promising results for the GTX 980. In the graphical and overall portion of the Cadalyst 15 v5.5 benchmark, the GTX 980 performed 4-5% faster than the GTX 780Ti. 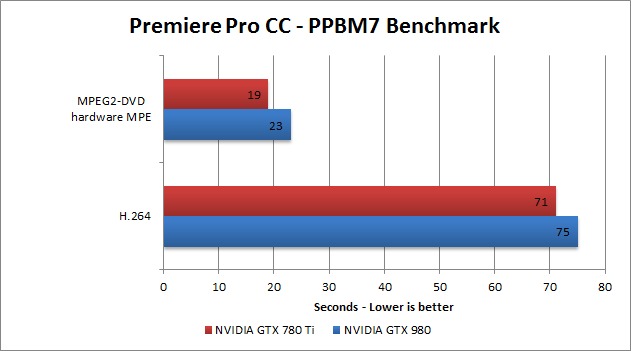 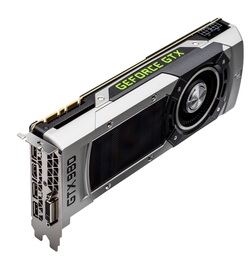 To start, the power draw on the GTX 980 has been dramatically improved – our testing confirmed that at load it draws about 85W less than the GTX 780Ti. Even if you aren't terribly concerned about power draw from a "green" standpoint, the lower power draw results in noticeably lower temperatures and noise levels. In addition, heat is the enemy of all electrical components so we expect the longevity of a GTX 980 to be much better than a GTX 780/780Ti.

Another improvement is the move to 3 DisplayPort connectors on the card and the upgrade to HDMI 2.0. We already have a good number of customer wanting to run multiple 4K displays from their system and we only expect the demand to increase in the future. For those customers, this card is a great option if an AMD Radeon or NVIDIA Quadro card cannot be used for whatever reason.

Overall, the GTX 980 has some great power improvements over the previous generation, but there isn't much of a compelling reason to upgrade from a GTX 780/780Ti to a GTX 980. If you are already looking for a new computer or GPU, however, there is almost no reason not to go with a GTX 980 instead of a previous generation card.