Skip to content
Always look at the date when you read an article. Some of the content in this article is most likely out of date, as it was written on September 29, 2014. For newer information, see our more recent articles.

Here at Puget Systems, we sell a lot of hard drives. In fact, in the last year alone we have sold over 2,000 traditional platter-based hard drives, nearly half of which were WD (Western Digital) Black drives. However, since we are constantly looking for ways to improve our product line – and by extension the computers we sell – not even a product that has this huge number of sales is completely safe from scrutiny. In fact, we have recently decided to replace the WD Black drives from many of our systems with the enterprise-level RE drives that are also made by WD. 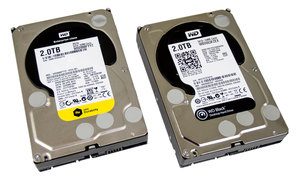 It may appear to be a risky move to replace our all-time biggest selling hard drive line, so in this article we are going to compare the Black and RE lines and show why we believe that this is a good move. One thing we want to note is that we will only be comparing the 2, 3, and 4TB versions of the Black and RE drives and skipping the 1TB versions. At the time this article was written, the RE 1TB drive is an older revision than the Black 1TB drive so it does not conform to the normal differences between the two model lines.

Because there are so many specifications and features to go over, we will be dividing this article into separate sections based on the categories that WD uses in their spec sheets. These categories include basic specifications, features, performance, reliability/data integrity, power management, environmental specifications, and physical dimensions. If you would rather just see a summary of why we are making this move, feel free to jump ahead to the Conclusion section. Likewise, if you would rather just see all the specifications at a glance without any of our commentary, simply expand the option below:

[-][+] WD Black vs. RE Specification Comparison


From a very basic standpoint, the two model lines are essentially the same. They are both 3.5-inch SATA 6GB/s drives that include 2, 3, and 4TB versions. The main difference we want to point out here is the price. If you were to purchase these drive from Newegg as parts, the RE drives are between $20 to $35 more expensive than the Black drives which works out to be about a 15% price premium for RE drives.

The features listed above are the majority of what sets RE drives apart from Black drives. The first feature we want to talk about it support for TLER (Time Limited Error Recovery) which limits the amount of time a hard drive can spend trying to recover from an error. Normally, if a data error is detected the hard drive will attempt to recover the data and repair the error. Depending on the nature and severity of the error, this can take anywhere from a few milliseconds to a couple of minutes. Normally, this isn't a big deal – it just results in the data not being available for a bit longer than normal. However, RAID controllers only allow for a short amount of recovery time (usually about 7-14 seconds) before the controller assumes that the drive is having problems, drops the drive from the array, and marks the array as degraded.

What TLER does is limit the amount of time the hard drive can spend trying to repair an error before giving up. Since many types of RAID have built-in error correcting, it is preferable to let the RAID itself repair the error than to let the hard drive drop and degrade the RAID array. While TLER is absolutely great if the drive is used in a RAID array, it typically will not have any impact on a drive that is simply a stand-alone drive.

While both Black and RE drives have StableTrac (where the motor shaft is secured at both ends to reduce vibration) and VCT (Vibration Control Technology), RE drives also have additional vibration protection through RAFF technology (Rotary Acceleration Feed Forward). RAFF technology is an advanced form of vibration cancelation that is intended to combat both performance degradation and reduced reliability due to vibration from sources like fans and other hard drives. Through the use of multiple linear accelerometers and microprocessors, a drive with RAFF technology is able to compensate and mitigate the effects of vibration on a hard drive.

If you have multiple hard drives (whether they are in a RAID or not), vibration protection is an extremely beneficial technology. In fact, RAFF technology is the main reason why WD doesn't have a recommend limit for the number of RE drives you can install in a system, but doesn't usually recommend using more than a couple of Black drives.

In addition to TLER and RAFF, RE drives also have "optional" support for SED (Self-Encrypting Drive technology) while the Black drives do not. We put optional in quotes because even though WD lists SED very prominently on the WD RE product page and spec sheet, it turns out that you cannot actually purchase an RE drive in the U.S.A. that has SED support. More information on SED is available in our Introduction to Self-Encrypting Drives article.

According to WD, Black and RE drives should have the exact same performance. However, in our testing, we have found that WD's specifications really don't tell the whole story. We run and log a number of benchmarks (including hard drive performance) on all of our systems during the production process which gives us a very large number of system benchmarks to draw from. While the sequential and random read/write MB/s and random read IOPS results are always very close between Black and RE drives, we have found that RE drives consistently have much better random write IOPS than their Black counterparts.

Another interesting thing that we have found is that while the exact performance of Black drives varies due to different hardware and firmware revisions, RE drives have a locked configuration which results in more consistent performance between drives.

If you are interested in an example of the performance difference between Black and RE drives, take a look at the benchmarks below comparing a Black 2TB and RE 2TB drive on the new X99 platform using CrystalDiskMark:


A load/unload cycle is when the disk spins up its platter to get ready for operation. Typically this happens when you turn on a system, resume from standby, or when the drive has been idle long enough for the OS to power down the drive. While RE drives are rated for twice the number of load/unload cycles, the 300,000 cycles the Black drives are rated for is really quite a lot already. Even if you turn on/off your system or let it idle long enough to power down the drive 20 times a day, 365 days a year, the Black drives should still last for over 40 years.

While the Black drives do not have a listed MTBF or AFR (Mean Time Between Failures and Average Failure Rate respectively), the RE drives are rated for 1,200,000 hours of enterprise-level usage. Both the Black and RE drives come with a 5 year warranty through WD.


From a power consumption standpoint, the RE drives use about .2-.7 more watts than the Black drives. This is not a significant amount, but it does mean that the RE drives should run a hair hotter than their Black counterparts.


For both the temperature limits and shock ratings the Black and RE drives are identical. In fact, the only difference between the two drive lines for these specifications is the idle noise levels. While the RE drives are rated to be 2dBA louder than the Black drives at idle, in our experience the difference is almost imperceptible. Neither of these drives are particularly quiet (WD Green and Red drives are much quieter), but unless you have a RE and Black drive side-by-side in a quiet environment, you are very unlikely to hear the difference.


Finally, since both the Black and RE drives are standard 3.5inch drives they are both the same physical size. However, the RE drives do weigh more than the Black drives by as much as a quarter of a pound. 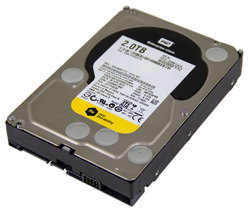 What it comes down to is that the WD RE drives have more advanced vibration protection with RAFF technology, support TLER (extremely useful for RAID arrays), are more reliable, and have much better random write IOPS than Black drives. On the other hand, they are slightly more expensive, use a little more power, and weigh a bit more.

In most situations the increased power draw and weight are likely non-factors. The price, however, is certainly a major consideration. However, our opinion the small price premium is very well worth all the advantages found in RE drives.

In the coming weeks, look for more and more of our certified systems to move from Black drives to RE drives. This is a pretty big move, and we would absolutely love to hear what you think about it. Let us know in the comments below!