A SED (or Self-Encrypting Drive) is a type of hard drive that automatically and continuously encrypts the data on the drive without any user interaction. What may surprise many readers is that a decent potion of the drives currently in the market (including the Samsung 840 Pro SSDs we use in our systems) are, in fact, SEDs. But since manufactures do not often tout it as a major feature, it often gets lost in the large number of typically more important specifications. Even once you purchase, install, and start using one of these SED drives, the encryption is so transparent to the user that it is unlikely they would ever realize the drive is a SED.

This means that all the data on the drive is encrypted at all times. One neat trick that can be done based on this is to almost instantly and completely wipe a hard drive. All you need to do is tell the SED to generate a new DEK and all the data on the drive immediately becomes gibberish (since the key needed to decrypt the data no longer exists) and is effectively unretrievable. So if you need to quickly and securely wipe a drive before either redeployment or disposal, SEDs offer a quick and very secure way to do so. This act is called a number of different names depending on the manufacturer, although it is most often referred to as doing a "Secure Erase".

What is SED Encryption?

While having the data encrypt and decrypt automatically on a hard drive is neat, it isn't really all that useful on its own since the hard drive will automatically decrypt the data on request. However, SEDs also allow you to set what is called an Authentication Key (AK) which acts as a password that locks the drive until the key is entered. If an Authentication Key is set up, the system will prompt for the key when it first powers on. While the number of attempts varies by the motherboard, if you put in the incorrect password after three or four attempts, the system will simply keep the drive locked and continue the boot process. If that happens, the drive becomes completely unusable by the system until the computer is powered off and the correct key is entered.

According to Seagate, this method of encryption has been certified by both the NIST and CSE as meeting the requirements for level 2 security for cryptographic modules.

When data security is a goal, it is essential to know the limitations and drawbacks of a certain technology. SEDs are a great technology, but they are no different than anything else in that they certainly have downsides. In the case of SEDs, the main downside is that once the drive has been unlocked, it remains so until the power to the drive has been cut. In other words, if you simply reboot the computer or put it into sleep, the drive remains unlocked. It is not until you completely power off the computer that it will again require the Authentication Key to be entered.

In other words, if your laptop is stolen and it was only in sleep mode then the data on the drive is completely exposed. If you have a user password set on the OS, a thief could still simply restart the machine, boot into a live environment, and have almost full access to your data. In fact, even if you have both an OS password and a BIOS password set, the data still could be accessed by moving the drive to a different computer without cutting the power. In laptops this would be tricky (but not impossible) but on a desktop is actually rather easy with the right setup.

So if you do decide to use SED encryption, our biggest advice is to get into the habit of powering off your system when it is not in use rather than simply putting it to sleep.

A second downside to SED encryption is that it will only work in simple disk configurations. You can have multiple drives in one system with SED encryption enabled and even use software RAID, but doing something like hardware-level RAID is simply not supported.

What is needed for SED encryption to work? 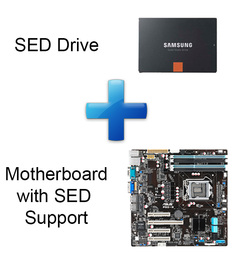 Some features of SED (like the automatic encryption and decryption of data and Secure Erase) will work regardless of the motherboard. But if you want to use SED encryption by setting an Authentication Key, you need a motherboard that supports doing so.
What we have found is that many laptops (including all the laptops in our Traverse and Traverse Pro lines) have the ability to use an Authentication Key without any need for a custom BIOS. However, they often lack the ability to set the AK though the BIOS. Of course, this doesn't mean that every laptop will support SED encryption, but in our experience laptops in general are much more likely to support it than desktop or server motherboards.
While talking with Asus, Super Micro, and Samsung, we have discovered that most desktop and server motherboards do fully support SEDs, but the ability to use an Authentication Key is expressly disabled. The reason for this appears to be that manufactures are afraid that a user may accidentally lock their hard drive and not remember what they used for the Authentication Key. So rather than risk having an angry customer that accidentally locked their drives, they leave that specific feature of SEDs disabled. However, since the feature is there and simply disabled, we have had success with getting custom BIOS files from the manufacturer that unlocked the ability to use Authentication Keys.

On a motherboard that fully supports SED encryption, there is a chance that there is an option in the BIOS setup to set, change, or remove the SED Authentication Key on your SED drive. However, we have found that many motherboards that support SED do not have this capability built into the BIOS. In those cases, you could use software like Winmagic to manage the SED encryption key, or you can go through a series of steps using a Linux live environment to manage the SED Authentication Key without the need for paid software.

If you have a computer purchased from Puget Systems, the System's Tools Disc that is included with your computer includes an Ubuntu live environment that has everything you need. To start this process, insert the Tools Disc into your computer and restart the system. When you see text similar to "Press any key to boot from DVD", press the space bar to boot to the Tools Disc. Once the main menu comes up, select "Live Linux Environment (Safe Graphics)" and hit enter. If you do not have a system purchased from Puget Systems, you can follow the directions from Ubuntu on how to create a LiveCD that should include everything you will need.

Once your system has booted into the Linux live environment, there are three combinations of steps you must go through in order to either set, remove, or change the SED encryption password.

After working with SED encryption and seeing how well it works, we are actually very surprised at how little support it has on modern motherboards. In fact, many motherboard manufacturers actively disable SED encryption and require a custom BIOS in order to make it active. Other motherboards, however, do support SED encryption although the ability to manage the password is not available from the BIOS. In those cases, you can still use SED encryption but you need to go though an unwieldy process involving a Linux live environment.

Overall, we have found that SED encryption is great as long as you do your homework and know that it will work on your system. Self-encrypting drives have their downsides (largely that it only requires the password to be entered when the machine is first turned on), but it is easy to use and effective for a very wide range of applications. If you are interested in encrypting your data, we highly recommend checking out SED encryption before considering options like Bitlocker or other software-based encryption.

Do you use hard drive encryption in your computer, either SED encryption or something else? Let us know about your experience in the comments below!