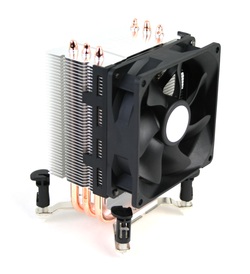 It may seem odd, but CPU heatsinks are one component that we spend a relatively large amount of time testing and qualifying. The reason is that there is a huge diversity of heatsinks available on the market and each gives a different level of both cooling and noise. In addition to the performance aspects, we also need to take into account the heatsink's mounting hardware since an amazing heatsink is no good if it comes loose in transit and causes damage to the other components in the system.

The Cooler Master Hyper TX3 is in the same class as our current Scythe Katana 3; both being almost identical in size and both utilizing push-pin style mounting. The reason we decided to look at this heatsink is because at the time of this article, the Scythe Katana 3 is in a bit of short supply. We were not actively looking to replace the Katana 3, but we wanted to find a heatsink that could fill in for our customers when the Katana 3 is in shortage. We are constantly on the lookout for better products however, so if this heatsink does very well there is a possibility of it replacing the Katana 3 in our current product line.

The Cooler Master Hyper TX3 uses three heatpipes to take advantage of the medium-sized heatsink. The heatsink itself is symmetrical, which allows the fan to be mounted on either side of the heatsink. Included in the packaging is a second set of fan mounting hardware allowing two fans to be used in a push/pull setup if desired.

The heatsink secures to the motherboard using the same push-pin mounting as the stock Intel heatsink and the Scythe Katana 3. For a heatsink of this size and mass, there is little danger of the heatsink coming loose in shipping using this style of mounting. Push-pins are much easier to use than bolt-through mounting so as long as shipping is not a danger we prefer this type of mounting.


The heatsink fan is mounted onto a pair of plastic brackets that then clip onto the heatsink. At first glance this mounting appeared a bit fragile, but it ended up being much more secure than we initially thought. While it was possible to remove the fan from the heatsink using just our fingers, the difficulty of doing so without a flathead screwdriver laid all of our fears of the fan coming off to rest.

This heatsink utilizes direct-contact heatpipes on the CPU contact area which allows the heatpipes to come into direct contact with the CPU. This is very good for cooling, although it has the disadvantage of making the bottom of the heatsink not completely flat. The area on either side of the heatpipes has a slight indentation between the aluminum plate and the heatpipes. This should not cause any performance issues however, so it is not that big of a deal.

Each of the four push-pin mounts are secured to the main heatsink with a pair of screws. The screws themselves are nice and long and should not be in any danger of coming out in shipping. Some may think that 2 screws per push-pin is overkill, but in our eyes anything that helps prevent shipping damage is great. 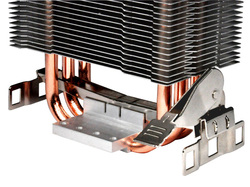 The mounting for AMD systems uses the standard latching mechanism found on most small to medium sized AMD heatsinks. This mounting is decent, but due to the height of the cooler is not something that we would want to use in our systems. The reason for this is that this type of latching mechanism is somewhat fragile and is relatively easy to come loose in shipping. Smaller heatsinks (like the stock AMD heatsinks) do just fine with this type of mounting but a heatsink with any amount of height to it is at risk of someing loose in transit.

Since the Cooler Master Hyper TX3 allows the fan to be mounted on either side of the heatsink in either push or a pull orientation, we wanted to include both orientations in our testing. Historically, a push configuration is better for both noise and cooling, but there are times when space limitations force you to move the fan to the opposite side of the heatsink. One specific example is the Silverstone TJ08-E in which the hard drives mount so close to the motherboard tray that most vertical heatsinks block the hard drive mounts. With a cooler like the Hyper TX3 where the fan can be mounted on the opposite side, however, you at least still have the option of using the heatsink, even if the cooling and noise levels may be slightly sub-optimal.

For our testing we will be using the Scythe Katana 3 as a comparison cooler along with the following hardware: 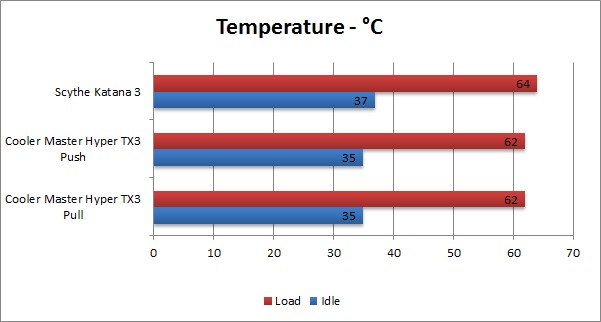 As you can see, the Cooler Master Hyper TX3 in either a push or a pull configuration performs slightly better than the Scythe Katana with a 2°C improvement at both idle and load. Suprisingly, moving the fan to the back of the heatsink in a pull orientation had no effect on our cooling. 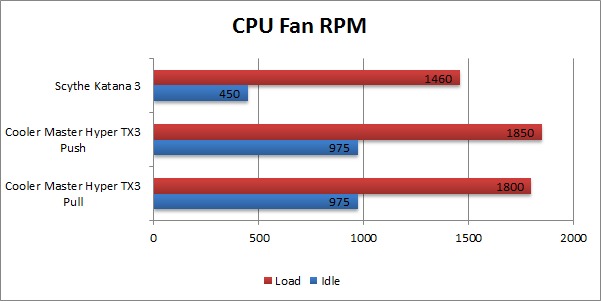 When we took a closer look at our benchmark logs, we found that the fan is running faster on the Hyper TX3 by roughly 400RPM at both idle and load. Once again, the pull orientation on the Hyper TX 3 surprised us with a 50 RPM decrease compared to the push orientation. Realistically, 50 RPMs will have no measurable effect on noise levels but it does indicate that this orientation is very, very slightly more efficient for cooling.

Unfortunately, we do not currently have a good method for measuring PWM fan noise at different RPMs (we're working on it though!) so we cannot give accurate measurements of each heatsink at the actual idle and load RPMs. Objectively, however, we found that the Cooler Master Hyper TX3 was very slightly louder at both idle and load. The difference is so minor however that we can essentially call it a wash. 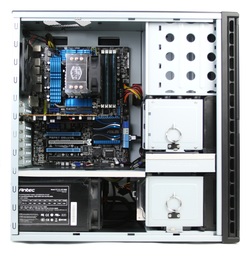 We were surprised at how similar this cooler is to the Scythe Katana 3. Sure, some of the main reasons we wanted to look at this cooler (physical size, standard 92mm PWM fan, push-pin mounting) are also major features on the Scythe Katana 3, but we did not expect the cooling performance and noise levels to be so close.

The fact that we can basically think of the Cooler Master Hyper TX3 as being identical to the Scythe Katana 3 makes our decision of which cooler to offer in our product line both easy and difficult. We have had a very good experience with Scythe as a brand, so we want to keep using their products when they work well for us. The advantage of being able to use the Hyper TX3 in a chassis similar to the Silverstone TJ08-E (with a minor movement of the fan), however, is just enough of an advantage that led us to ultimately decide to start carrying the Hyper TX3 in our current product line over the Scythe Katana 3.