Skip to content
Always look at the date when you read an article. Some of the content in this article is most likely out of date, as it was written on March 29, 2012. For newer information, see our more recent articles.

The Intel E5 Xeon line is a bit different, however, with the two CPUs at the top of the product line: the E5-2687W and the E5-2690. At first glance, the E5-2687W is faster since it has a higher clock speed but this advantage gets a bit muddied by that fact that both CPUs have the exact same maximum Turbo Boost frequency. With the combination of SpeedStep and Turbo Boost, an Intel CPU can run at a either reduced speed (with SpeedStep), an overclocked speed (with Turbo Boost) or at various levels in between.

So this raises the question of whether or not the E5-2687W is actually any faster than the E5-2690. Before we get into our testing of both CPUs, lets first review the specifications for each CPU to see what differences there are and how they might affect performance.

As you can see by the table to the right, there are only two places where the 2687W and the 2690 differ in terms of specifications. The first is the clock speed which is .2GHz higher on the 2687W. The second difference is the thermal output which is the amount of heat that the CPU puts out.

The biggest thing that the thermal output affects is the amount of cooling required to keep the CPU at a safe temperature. A lower wattage means less cooling is required which generally also means less noise. From a performance standpoint, a higher thermal output also means that the CPU will have a harder time staying at its Turbo Boost frequency. This is due to the fact that Intel's Turbo Boost takes into account how much thermal headroom the CPU has to determine if and how long the CPU can run at its Turbo Boost frequency.

So theoretically, the 2690 should have an easier time going into Turbo Boost and should be able to maintain it for longer than the 2687W. With adequate cooling, however, this advantage should be essentially rendered moot. If both CPUs are cooler below their thermal limits, they both should be able to go into and stay in Turbo Boost for as long as needed.

So this raises an interesting question about the relative performance of these two products. The 2687W is technically faster with the higher base clock speed, but the lower thermal output on the 2690 should allow it to have an easier time running at its Turbo Boost frequency. To find out if either CPU has a performance edge, we decided to run an extensive set of benchmarks to determine the exact performance difference between these two CPUs.

For this article, we will be benchmarking the two CPUs using the following hardware:


Our benchmarking suite contains a variety of both application and game benchmarks which should give us a clear look at how these CPUs perform across a wide range of applications.

Cinebench is a great benchmark to measure CPU performance, but even so is not able to show very much performance difference between the two CPUs in the CPU portion of the benchmark. In both of the single and multiple CPU portion of Cinebench, the tiny .01 difference in scores is well with our margin of error, so in that regard these two CPUs are equal. In the GPU portion, however, we do see a slight performance increase with the 2687W running about 2% faster than the 2690.

With Windows Media Encoder, we see a decent increase in performance with the 2687W. While four seconds might not seem like much of an improvement, if a machine is being dedicated to encoding videos 24/7, that 3.6% difference can add up over the life of the machine.

Handbrake is another video encoding benchmark but the results this time does not show as much of a difference as the Windows Media Encoder test. While the 2687W does still come out on top, it is only with a modest 1.7% reduction in encoding time.

Lame is an audio encoding benchmark and once again shows a reduction in encoding time with the 2687W. This test gives us the largest relative performance difference with a drop of almost 6% in encoding time.

Euler3d is a benchmark that does an analysis of airflow of an aircraft wing. On this test, we see a 4% performance increase with the 2687W.

Our WinRar benchmark simply measures the time it takes to first compress a 422.24MB file, and then extract it. The results of this test are hugely in favor of the 2687W, with a 13.5% decrease in compression time and a whopping 31% decrease in extraction time. 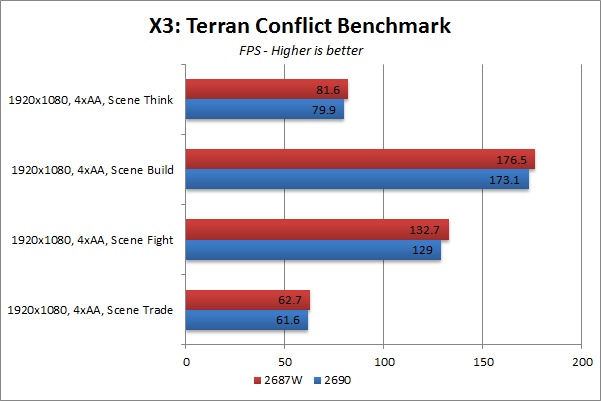 Our first game test uses the slightly dated X3: Terran Conflict benchmark. Unlike many modern games, X3 is not largely GPU limited so the difference in CPU performance should be noticeable. In fact, we saw an average increase of 2% in FPS when using the 2687W. 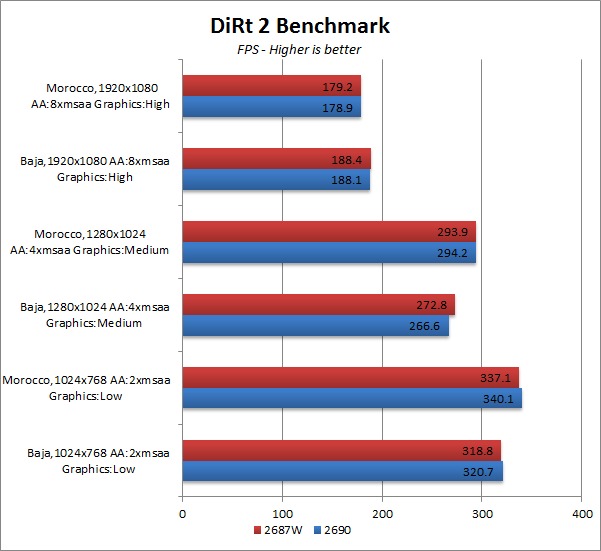 DiRt 2 is a more modern game, and is largely GPU limited. While we did not see any notable performance difference at the higher settings, at the lower settings there was some variation. At the very lowest settings, the 2690 finally has a win, although only by about 1% 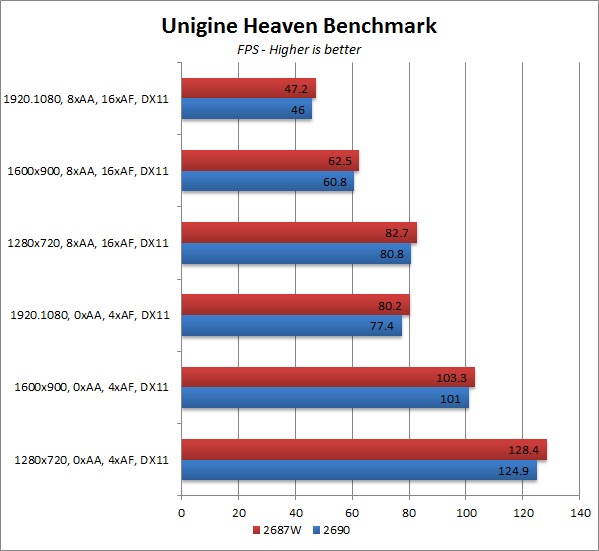 Unigine Heaven is a DirectX 11 benchmark and is a good indication of modern game performance. Usually this benchmark is GPU limited, so the 2-3% performance increase with the 2687W is a bit of a surprise to us. A win is a win however, and the 2687W once again comes out on top. 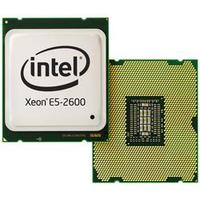 With the exception of DiRt 2 which had the 2690 at a slight advantage, and Cinebench's CPU portion which showed no performance difference, our benchmarks were heavily in favor of the 2687W. The scope of the advantage was varied, with an average of about 5% better performance than the 2690.

Our biggest worry with the 2687W was whether the 150W thermal output would be more than our cooling system could handle. Our worry ended up being unfounded, however, with the 2687W CPUs hitting a maximum of 72°C under full load. That is 5°C hotter than the 69°C we saw with the 2690, but still well within our allowed maximum of 80°C.

The conclusion from our testing is pretty clear: the 2687W does indeed have a performance advantage over the 2690 even though both have the exact same maximum turbo boost frequency. Before we ran our tests, we completely expected the 2690 to be able to achieve a consistently higher turbo boost frequency due to its lower TDP of 130W resulting in either the 2690 performing better or the results being equal. In our testing, however, we found that the reduced wattage was not enough to overcome the .2GHz base clock speed advantage found on the 2687W.