Skip to content
Always look at the date when you read an article. Some of the content in this article is most likely out of date, as it was written on October 8, 2021. For newer information, see Should you upgrade to Windows 11 for Unreal Engine?

Windows 11 is very new, and many applications have not release updates to take full advantage of what Windows 11 offers. Due to this alone, we recommend waiting to upgrade to Windows 11 until the applications you rely on are fully supported.

Our early testing shows in many cases, Windows 11 is no faster or slower than Windows 10 when it comes to Unreal Engine. Some minor bugs have been noted, but nothing that prevents Unreal Engine from operating as expected. We only looked at performance of the engine itself, so additional issues may be faced with third party capture cards or motion tracking hardware. Proceed with caution until those manufacturers provide Windows 11 support.

In this article, we will be looking Unreal Engine to see how it performs and behaves in Windows 11. While Unreal Engine does not officially support Windows 11, we are likely to see updates on both the application side and OS side in the coming weeks.

Once Windows 11 support is officially added, things are very likely to change. But, we know a lot of users are excited to upgrade to Windows 11, so we wanted to see how things are in these early days post-launch. 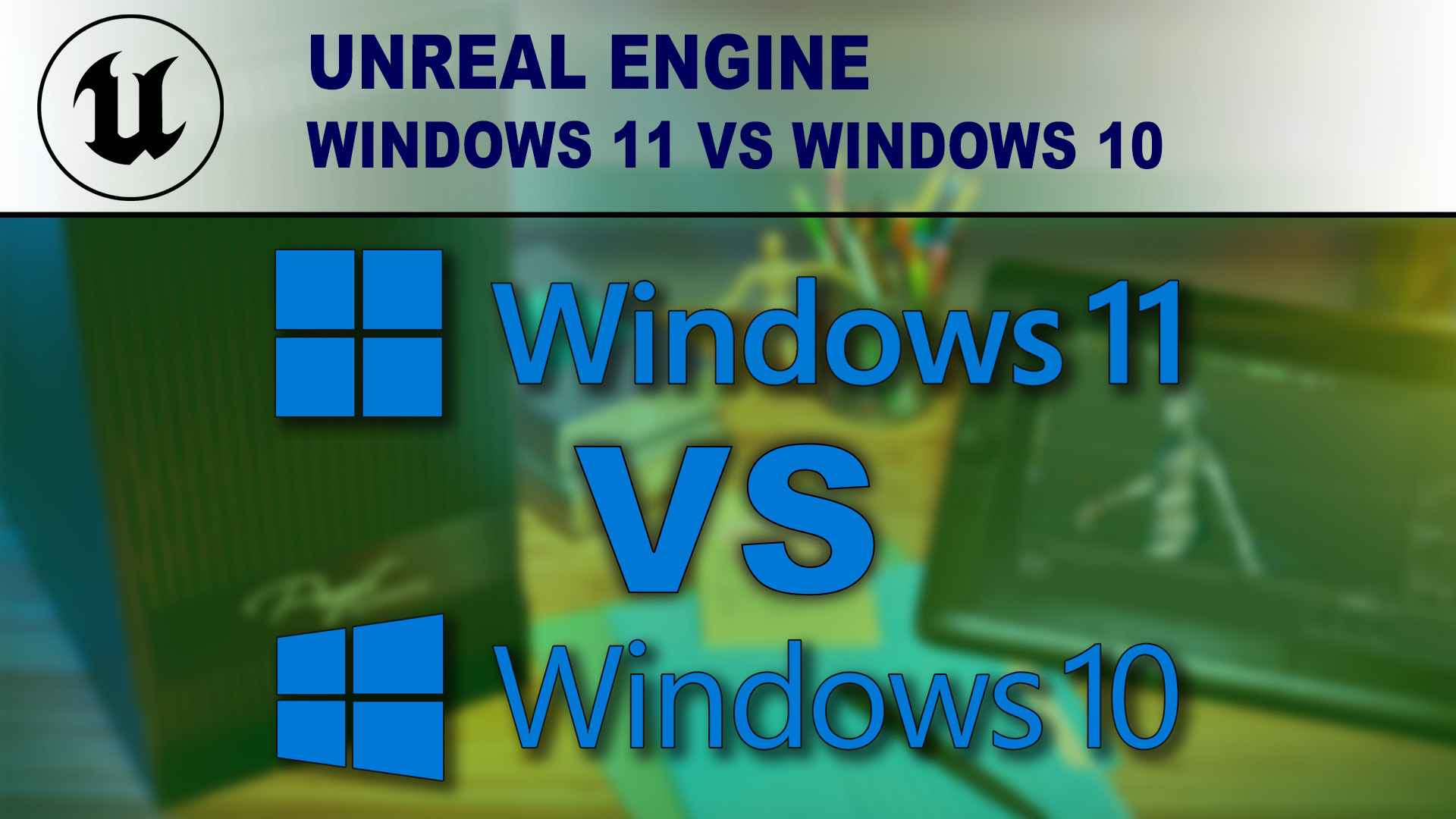 To examine rendering performance in Windows 11, we will be using our custom benchmark that includes compiling code, shaders, baked lighting, and average FPS in various environments both with and without Ray Tracing enabled.. For the sake of simplicity, we will be covering both CPU and GPU-based performance in this article.

To look at a wide range of system platforms, we are testing one CPU from the Intel Core 11th Gen, AMD Ryzen 5000 series, and AMD Threadripper 3000 series of processors. These are by far the most popular platforms for Unreal Engine across Game Dev, ArchViz and Virtual Production. 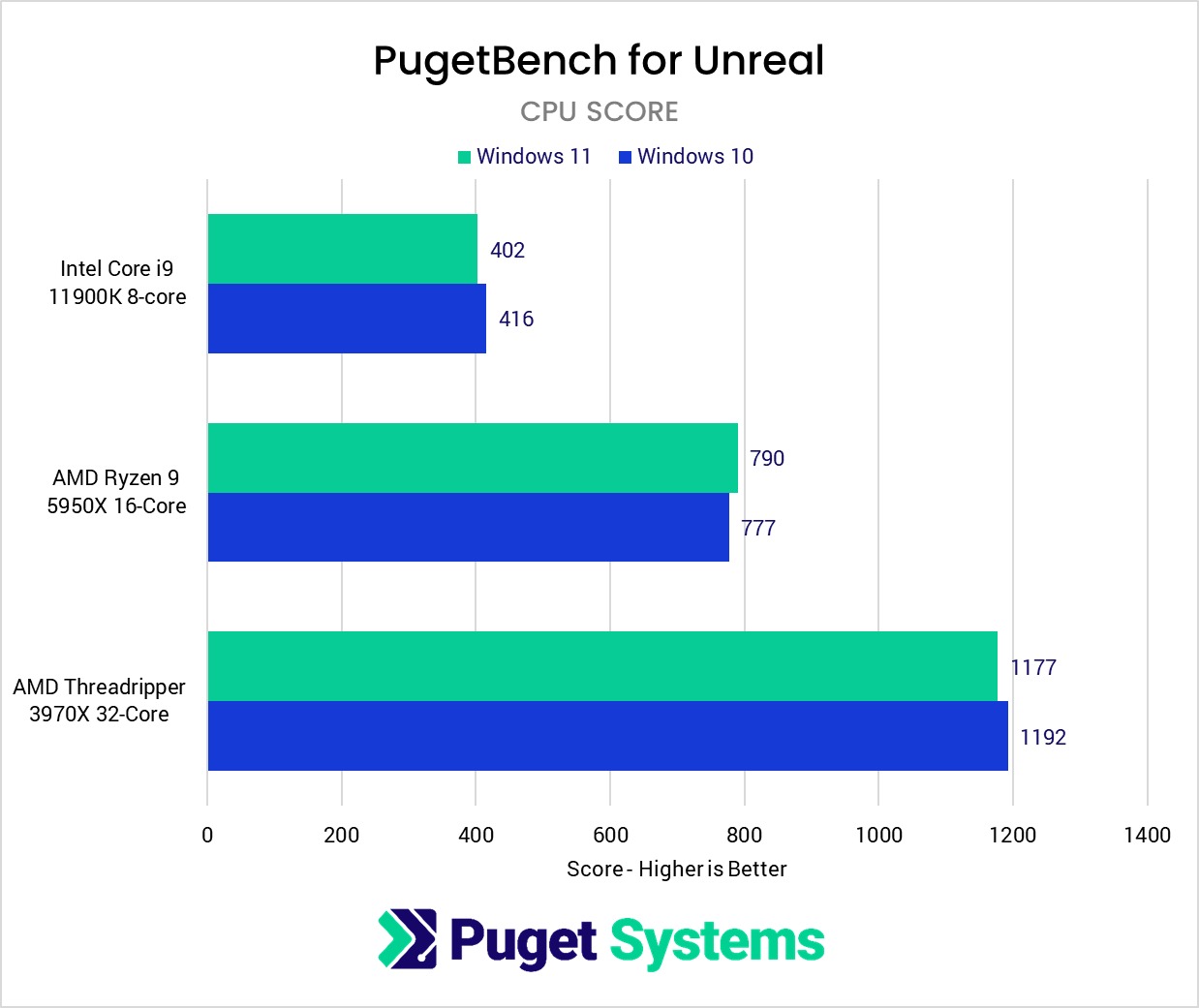 Starting off with CPU performance. This score is a combination of compiling source code with Visual Studio 2019, CPU Build Lighting, and compiling shaders. For the sake of brevity, i’ve only included the overall score chart, as the same story is seen across all of them. No matter which platform, there is little to no difference in upgrading to Windows 11. In all cases, the score is within the margin of error.

In a few other applications, AMD’s Threadripper 3990X 64-core saw significantly lower performance in Windows 11 due to scheduling issues within the OS. While it is not included in this chart, that CPU was tested in Windows 11 and did not see any performance loss. 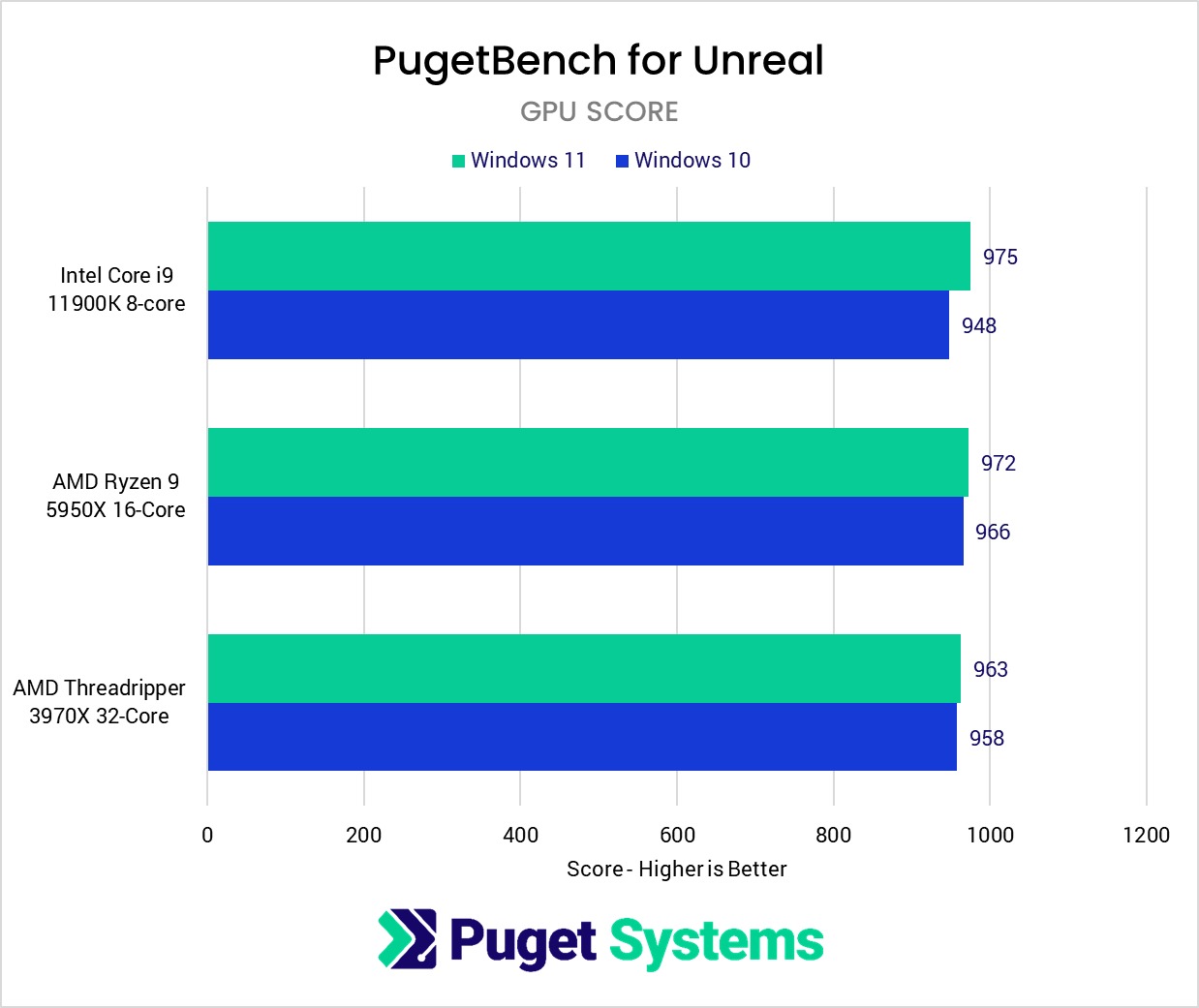 During testing, Unreal, for the most part, behaved exactly how it should. The one odd bug that was witnessed was that when opening a project from the Project Browser would generate a crash report, even though the project would open and run just as expected. This seems to be related to how Unreal detects one of its own windows closing in Windows 11 and thinking it crashed instead of closed as intended. This was not observed if the project was opened from the Epic Games Launcher. Again, this is not something that would prevent the application from working as intended, but is slighly annoying.

Should you Upgrade to Windows 11 for Unreal Engine?

Again we’d like to stress that this is a very early stage for an OS, and many things will be subject to change in the coming weeks and months. This article aims to give a very brief snapshot of the state of Windows 11 at launch, and only looks into performance of Unreal Engine. There are many other factors to consider before upgrading.

At this time, we don't know how other popular add-in cards such as Decklink capture cards or motion capture software will behave when used in Unreal. As is typical with an OS launch, there will be many performance improvements and bug fixes coming from both Microsoft and the software developers in the coming weeks and months.