Written on July 6, 2022 by Matt Bach
Share:
Table of Contents

Overall, we didn't see many performance issues with Windows 11, but there were also very few cases where it was consistently faster than Windows 10. There were very few patterns based on the CPU we tested, or the specific application, which makes recommending one OS over the other very difficult for those looking to get the best performance out of their system.

Outside of what appears to be a clear bug when using Windows 10 in Unreal Engine with the Core i9 12900K, the overall average difference between Windows 10 and Windows 11 worked out to around a whopping 1% in favor of Windows 11. At this point, for most users, we would recommend simply using whichever one you prefer.

When Windows 11 officially launched in October 2021, we did quite a bit of testing in order to see whether it gave any tangible performance benefits for video editing, rendering, and game development applications. At the time, there were a number of applications that did not have official Windows 11 support, and in many cases, this contributed to Windows 10 being significantly faster than Windows 11.

Since then, all of the applications we typically test have added official support for Windows 11, and the OS, in general, has had time to grow and mature. In addition, we have a number of newer CPU product lines that did not exist back in October (Intel Core 12th Gen and AMD Threadripper PRO 5000WX), so we felt it was time to revisit this topic to see if performance in Windows 11 has improved. 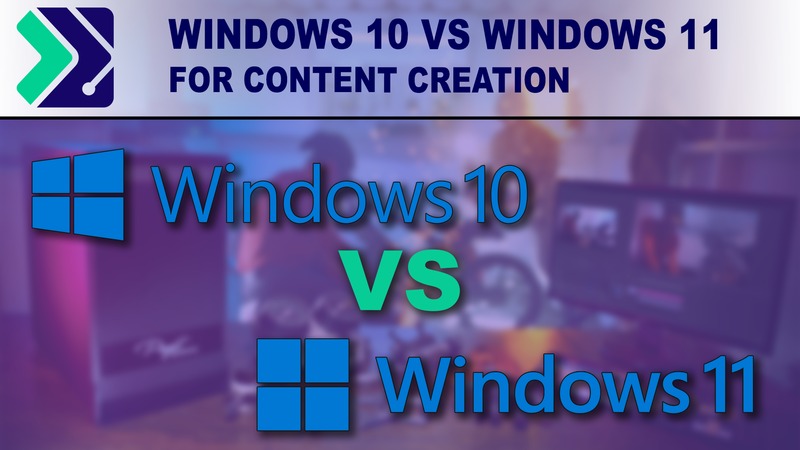 To see how Windows 11 performs with the latest BIOS, drivers, OS, and application updates, we will be testing our full content creation suite of benchmarks on 3 different platforms: Intel Core 12th Gen, AMD Ryzen 5000, and the new AMD Threadripper PRO 5000 WX-Series. We will only have 1-2 CPUs from each platform, but we spread them across a range of core counts to see if core count would come into play at all.

In order to see the performance difference between Windows 10 and Windows 11 for content creation applications, we will be looking at a spread of CPUs from both Intel and AMD.

For the tests themselves, we will be primarily using our PugetBench series of benchmarks using the latest versions of the host applications. Most of these benchmarks include the ability to upload the results to our online database, so if you want to know how your own system compares, you can download and run the benchmark yourself. Our testing is also supplemented with a number of benchmarks directly from the software developers for applications like Cinema4D, Blender, and V-Ray.

Each benchmark was run multiple times to ensure that we did not get an abnormally low score due to background tasks, and the highest result was used in the charts below. VBS (virtualization-based security) and "Game Mode" were disabled on both Windows 10 and Windows 11 as we found that they can cause a significant drop in performance in some applications.

To kick things off, we are going to look at the performance in Windows 10 and Windows 11 for video editing applications like Premiere Pro, After Effects, and DaVinci Resolve Studio.

Moving on to After Effects, the results get a bit less clear. On average, Windows 10 and Windows 11 performed within a percent of each other. However, that is solely because the AMD Ryzen 5950X and Threadripper Pro 5975WX were ~5% faster in Windows 10, while the Intel Core i9 12900K and AMD Threadripper PRO 5995WX were 6-8% faster in Windows 11. That gives a slight edge to Windows 11 with the CPUs we tested, but also suggests that which OS is faster for After Effects is going to be relatively minor, and depends on the specific hardware in your system.

Lastly, for DaVinci Resolve Studio all the results were within a few percent of each other. Since we didn't see a significant difference between Windows 10 and Windows 11, it shouldn't matter which OS you use from a performance standpoint,.

For video editing overall, there isn't a clear winner between Windows 10 and Windows 11. From a pure averaging of our results across the hardware and software we tested, Windows 10 came up with the slightest of leads, but it was only by about 2%. Sadly, this means that while our testing shows that the difference between Windows 10 and 11 can be as much as 10% in some cases, the faster OS changes depending on the hardware and software in question.

Next up we are going to look at the two photography applications we regularly test: Photoshop and Lightroom Classic.

In Adobe Photoshop, the only CPU that showed more than a minor difference between Windows 10 and 11 was the Intel Core i9 12900K which was 7% faster in Windows 11. Photoshop is the most lightly threaded application we have tested to this point, so it is possible that this is due to the improved thread scheduling Windows 11 is supposed to have in order to better take advantage of the hybrid architecture of the Intel Core 12th Gen processors. No matter the reason, however, since this was the only major difference in our testing, Windows 11 seems to be the best choice for Photoshop.

Unfortunately, Lightroom Classic doesn't follow suit. Here, the AMD Ryzen 5950X and Threadripper Pro 5995WX were 8-9% faster in Windows 10, while the other two CPUs only showed less than a 5% difference between the two OS. That means that for Lightroom Classic, Windows 10 is a clear winner.

So, should you use Windows 10 or Windows 11 for Photography applications? Unfortunately, there is no clear answer here. Photoshop favored Windows 11 with the Core i9 12900K, but Lightroom Classic clearly favored Windows 10 with the 5950X and 5995WX. Funny enough, if you average everything across both applications, Windows 10 and 11 end up dead even in terms of average performance gain. That means that across the hardware we tested, there isn't a clear winner.

Switching gears a bit towards rendering, we decided to divide things up between CPU- and GPU-based rendering. Many of the rendering engines we test have both CPU and GPU modes, which obviously utilize hardware very differently.

And, at least for CPU rendering, there isn't all that much to talk about. For Cinebench, V-Ray, and Blender, the CPU rendering results between Windows 10 and Windows 11 were all within a few percent of each other. In other words, the OS doesn't seem to matter all that much.

Most significant was from the V-Ray CUDA tests where Windows 11 was nearly 20% faster across all four CPUs. To be fair, since this is a GPU-based test, it is expected that the results be consistent across each test bed since we are using the same GPU for each. If we were to use different GPU models, we likely would see some variations. No matter what, however, it seems clear that Windows 11 has a solid performance advantage if you render with V-Ray's CUDA mode. On the other hand, if you use the RTX rendering mode with the same engine, performance is overall significantly higher, and there isn't a significant difference between the two versions of Windows.

Apart from V-Ray, only Blender showed any measurable difference, and it was only by about 3-4% in favor of Windows 11. Rendering benchmarks tend to have a smaller margin of error compared to many of the other benchmarks we regularly run, but that is still a pretty small difference.

Last up, we wanted to look at game development. While there are many applications used for this, we currently only have benchmarks developed for Unreal Engine, so we are going to focus on various tasks within that application.

While many of our results between Windows 10 and 11 are within a few percent, with the Core i9 12900K we saw a massive performance gain in Windows 11. The difference is to the point that we are fairly positive that there is simply a performance bug with Unreal Engine 4.26 and the 12900K (and possibly the whole 12th gen line) in Windows 10. The Windows 11 results are right in line with what we would expect relative to the other processors we tested, and there is no way that the 12900K should be as bad as it was when we ran it on Windows 10.

We considered dropping this result completely from this article, but we verified the result multiple times, applied every fix we could think of and got consistent results. It is very possible (even likely) that this is just a bug that will get fixed soon, but it definitely means that, at least with that CPU, you want to use Windows 11 for Unreal Engine.

The last time we compared Windows 11 to Windows 10 for video editing, rendering, and game development, we found that Windows 10 typically gave measurably higher performance than Windows 11. That was right after Windows 11 officially launched, however, and there have been a host of updates, and even entire new generations of CPUs launched, since then.

The good news is that we didn't see nearly as many performance issues with Windows 11 this time around, so many of the problems we saw at launch seem to have been worked out. On the other hand, Windows 11 also wasn't a clear winner over Windows 10 in most cases. There were some areas where Windows 11 gave measurably higher performance, but there were just as many cases where Windows 10 was faster. There were also very few patterns based on the CPU model, core count, or application, which makes recommending one OS over the other very difficult for those looking to get the best performance out of their system.

Outside of what appears to be a clear bug when using Windows 10 in Unreal Engine with the Core i9 12900K, the overall average difference between Windows 10 and Windows 11 worked out to around a whopping 1% in favor of Windows 11. And that holds true whether you are looking across all the CPUs we tested, or for each CPU individually.

If you are a content creator and are looking for a completely generic answer about which OS to use, it would have to be "it doesn't matter". The nuance of it is much more complicated, however, since it depends on both the software you are using and the hardware in your system. Overall, there are only a few instances where there was a clear performance advantage to using one OS over the other:

If you are looking to eke out every last drop of performance your system is capable of, you could do some specific testing to see whether Windows 10 or 11 will give you better performance. But for most people, we would recommend simply using whichever one you prefer unless you meet one of the three clear cases we listed above.