Skip to content
Always look at the date when you read an article. Some of the content in this article is most likely out of date, as it was written on October 8, 2021. For newer information, see Should you upgrade to Windows 11 for Video Editing?

Windows 11 is very new, and many of the most popular video editing applications (including Premiere Pro and After Effects) do not yet have official support. Due to this alone, we recommend waiting to upgrade to Windows 11 until the applications you rely on are fully supported.

Out early testing also showed very few cases where Windows 11 was faster than Windows 10, and most users are more likely to see a small drop in performance than anything else. There are a few instances where performance was significantly better in Windows 11, but the biggest performance gains were for the Intel Xeon W-3375 38 Core, which is not at all a common CPU for video editing. 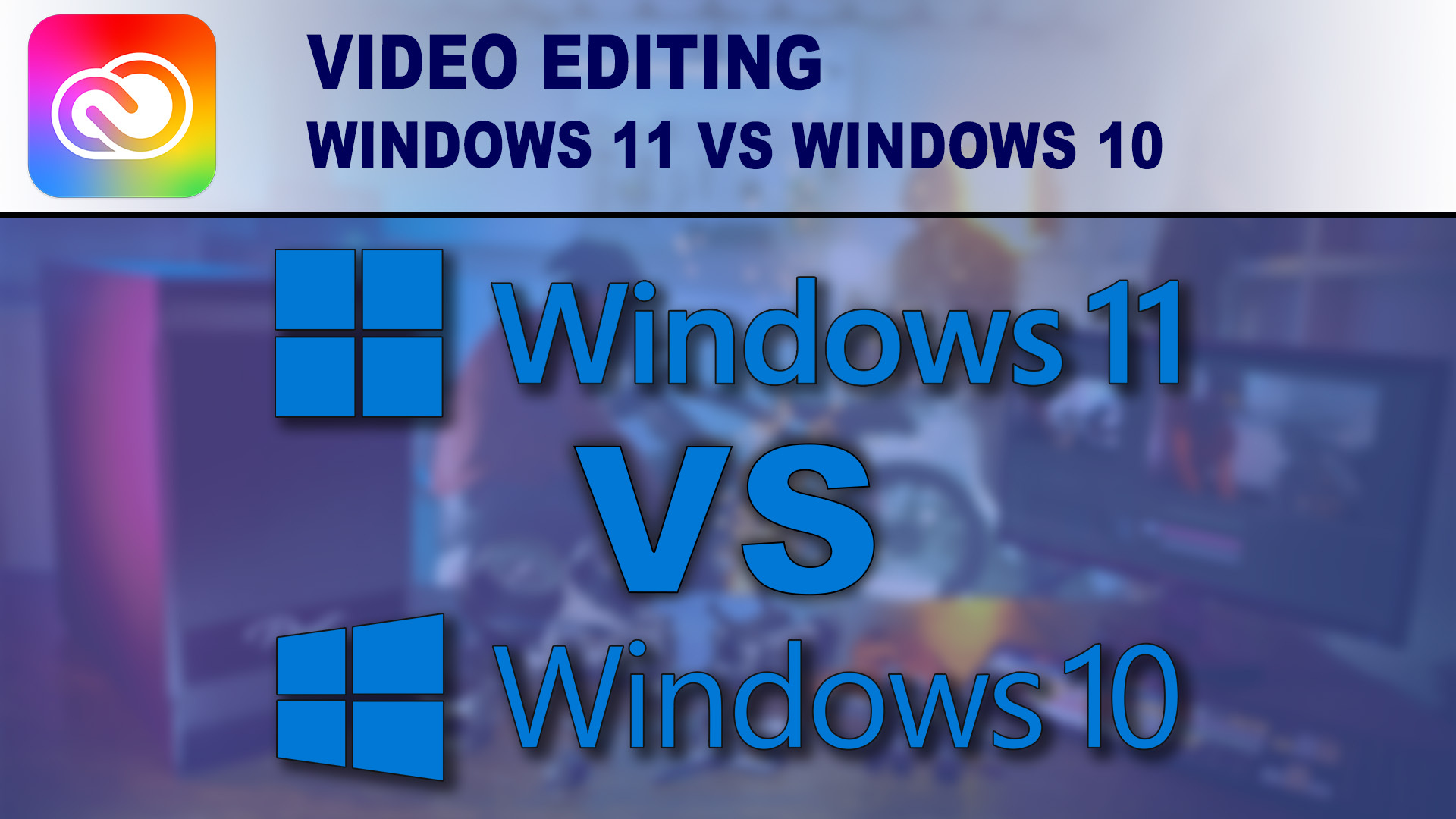 Windows 11 is finally here, featuring an updated UI, better support for virtual desktops, improved window snapping, and a wealth of other changes. However, a new OS often has a number of bugs and issues at launch, and it takes some time before applications have full support.

In this article, we will be looking at a few of the most popular video editing applications to see how they perform and behave in Windows 11 – namely Premiere Pro, After Effects, and DaVinci Resolve. However, be aware that at the moment, both Premiere Pro and After Effects do NOT have official support for Windows 11 (Source: Can I run my Adobe apps in Windows 11?). So, take the information in this article as an indicator of early compatibility and performance, rather than the final word on how they will fare in Windows 11 long-term.

Once Windows 11 support is officially added to these applications, things are very likely to change. But, we know a lot of users are excited to upgrade to Windows 11, so we wanted to see how these applications behave in these early days post-launch.

To examine video editing performance in Windows 11, we will be using our PugetBench series of benchmarks for Premiere Pro, After Effects, and DaVinci Resolve Studio. We are using the latest version for Premiere Pro and DaVinci Resolve Studio, but will actually be testing the After Effects BETA in order to take advantage of the new multi-frame rendering feature which can improve performance by up to 4.5x depending on the CPU and test.

As we noted earlier, be aware that Windows 11 is not currently an officially supported OS for Premiere Pro and After Effects. We also are not sure if DaVinci Resolve has official support or not, as they do not make it clear on their system requirements if Windows 11 is supported or not. 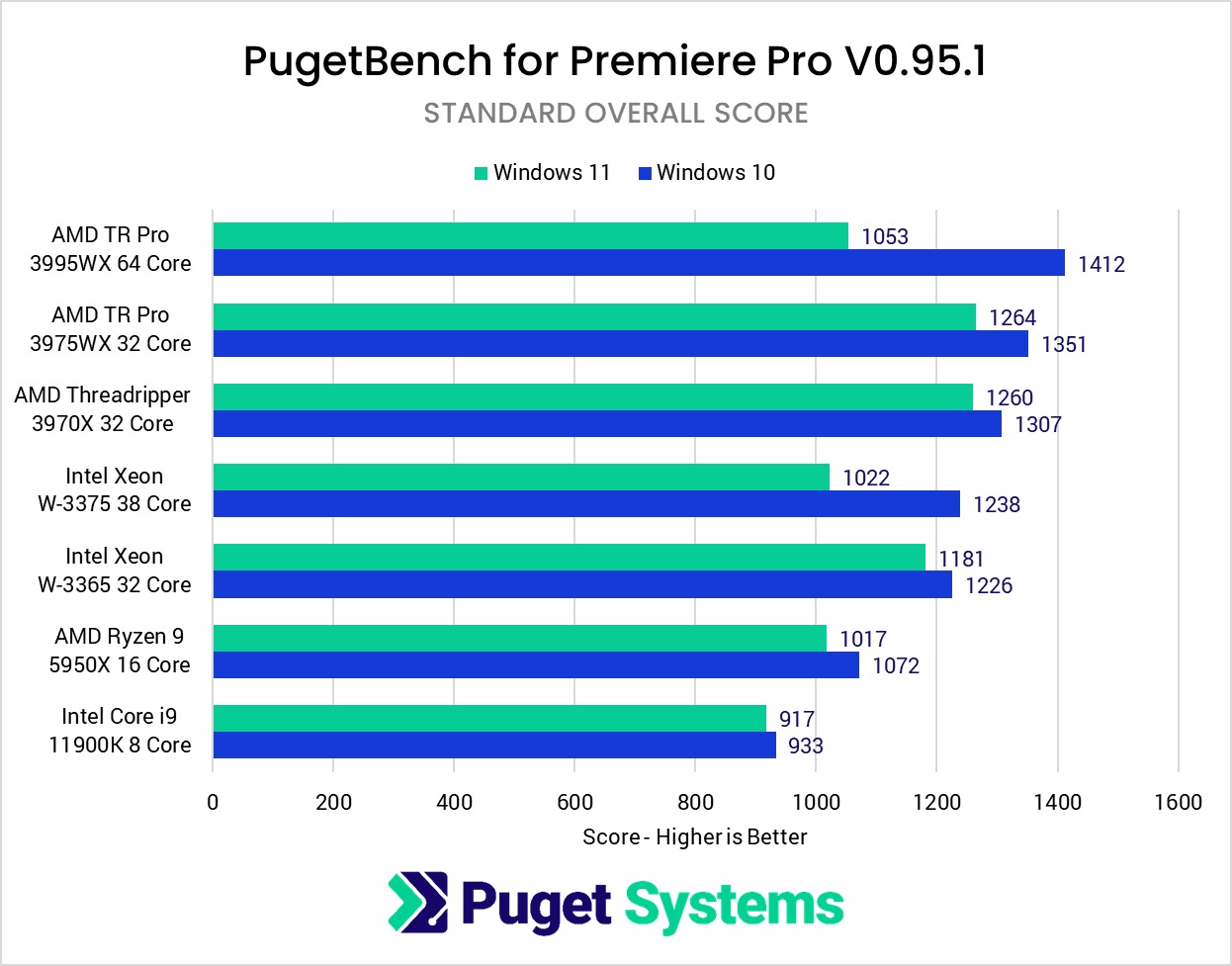 Starting off with performance in Premiere Pro, most of the CPUs we tested saw a drop in performance when we upgraded to Windows 11. For many of them, the difference was only about 5% or less, but especially on the higher core count AMD Threadripper Pro 3995WX 64 Core and Intel Xeon W-3375 38 Core, the performance was 20-25% lower. That is a pretty big drop in performance, so unless you have a specific reason to upgrade to Windows 11, we would not recommend doing so if you regularly use Premiere Pro.

In addition to the big performance drop we saw with the 38 and 64 core CPUs, we also ran into a few bugs that were isolated to these specific CPU models. For some reason, Premiere Pro simply refused to import any HEVC media when using these two processors. Switching out the CPU to a lower core count model worked just fine (even with the same motherboard, GPU, RAM, OS install, etc.), but as soon as we installed a CPU with more than 32 cores, we would get an "ImporterMPEG (Importer:39)" error. In fact, this is why we are using the "Standard Overall Score" rather than running the "Extended" preset in our benchmark like we normally do, as the "Standard" preset does not include an HEVC test.

Update 10/11/2021: The bug we encountered when importing HEVC media on certain CPUs has been fixed. There was no Premiere Pro update between now and when we did this testing, so it was likely a Windows Update that resolved the issue. 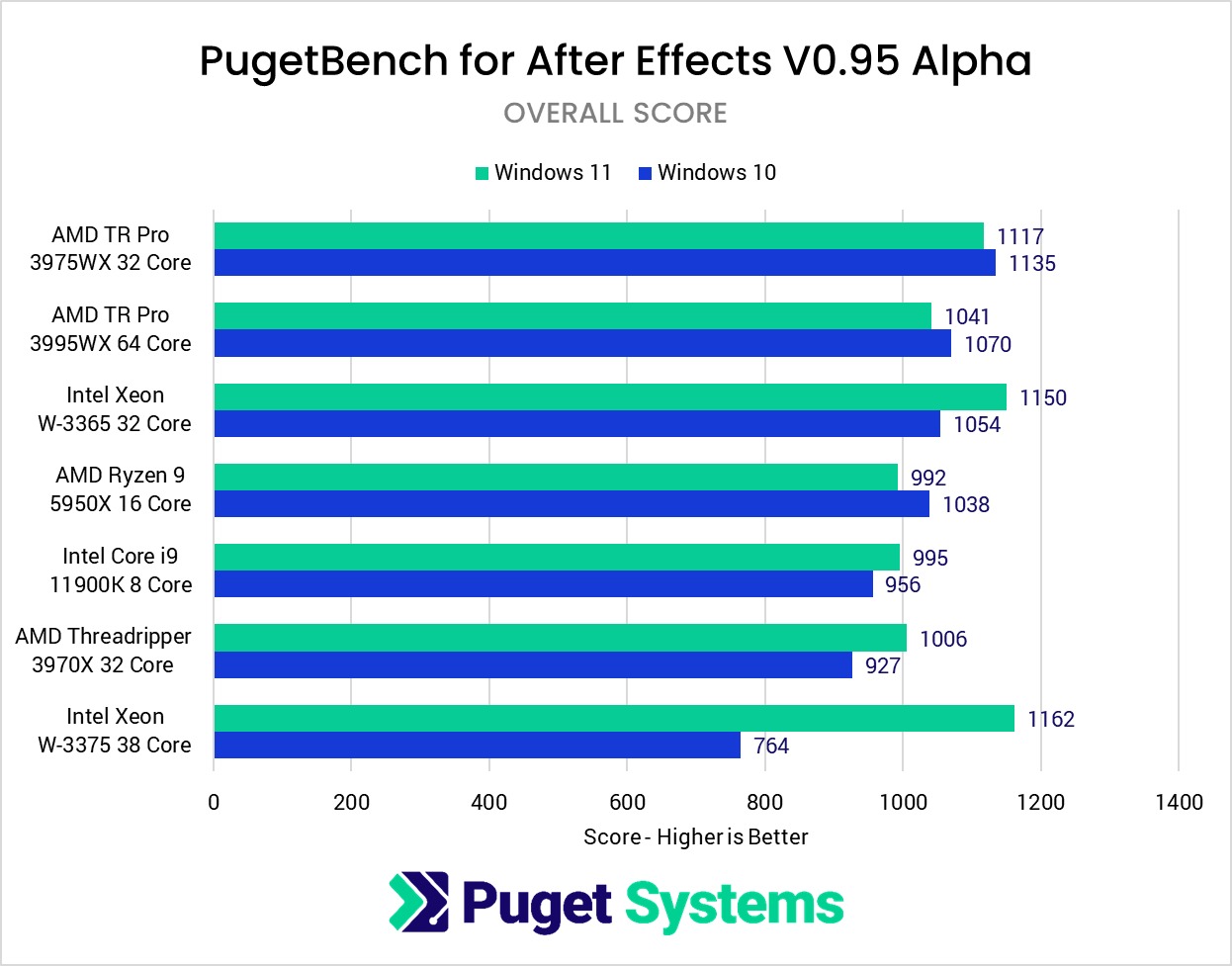 For our After Effects testing, we are using the beta version of Ae because Adobe is introducing a new feature called multi-frame rendering. We have a whole series of posts on this feature and how it changes the ways in which After Effects utilizes hardware, but the short of it is that it can often provide a 2-4x increase in performance and makes Ae significantly better at utilizing high core count CPUs.

No matter the reason why (which will take a lot of further investigation), it is nice to see that the Xeon W-3375 is more in line with the other processors. That CPU, in particular, tends to have performance issues in a number of applications (likely due to how Windows handles CPUs with more than 32 core or 64 threads), and this is evidence that Windows 11's improved thread scheduling may be something that can help the Xeon W-3375 38 Core.

Outside of performance, we are happy to report that we came across no issues while testing After Effects. That does not mean issues do not exist (Ae doesn't have official Windows 11 support after all), but through the course of our testing, everything behaved and worked as expected. 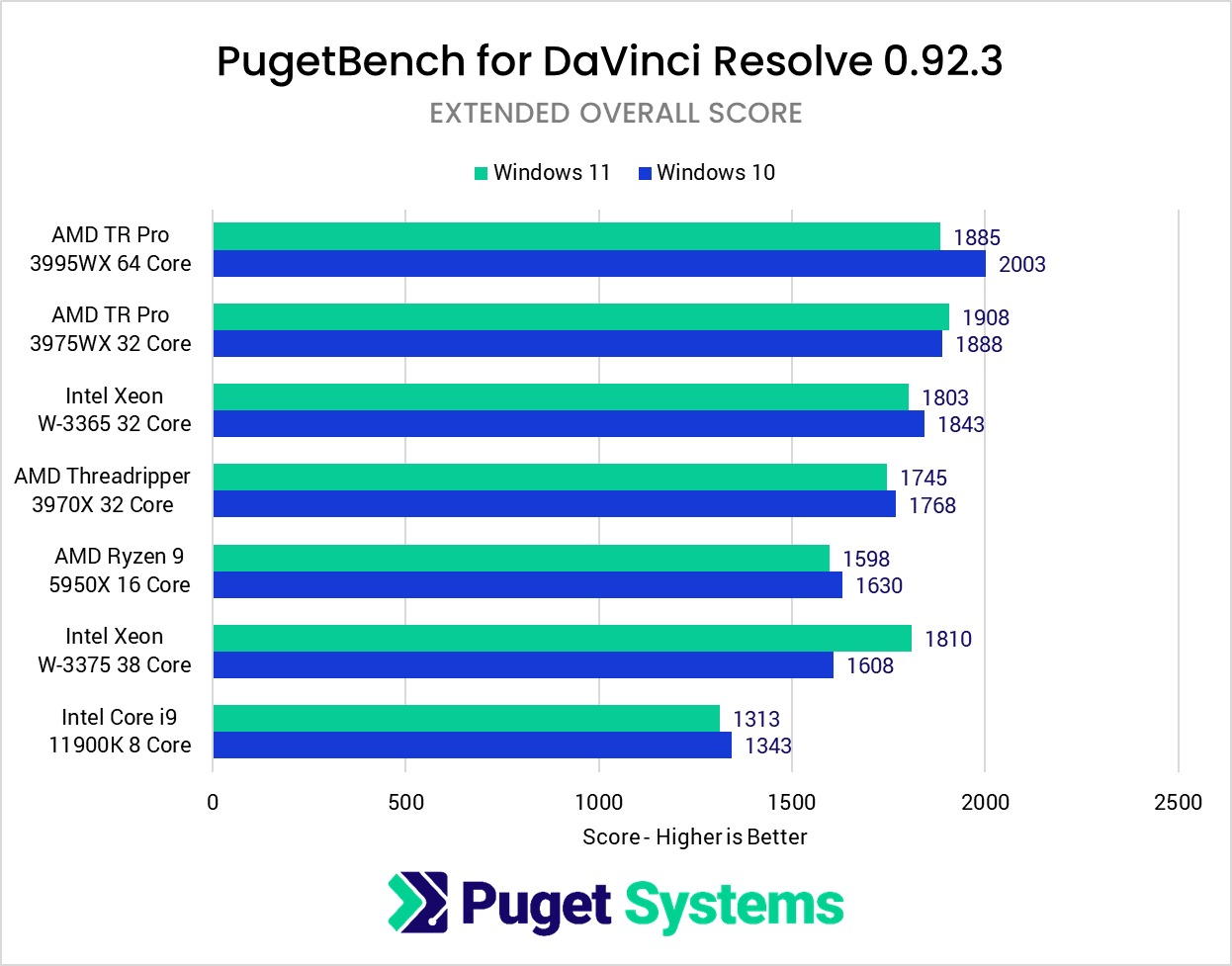 To round out our early look at Windows 11, we decided to run our standard DaVinci Resolve benchmark. For this benchmark, most of the results for Windows 10 and Windows 11 were within a few percent – well within the margin of error for tests like this.

However, there were two results where the performance difference was large enough that we can draw some conclusions. Unfortunately, they are somewhat contradictory conclusions. First, the AMD Threadripper Pro 3995WX 64 core saw a small, but measurable, 6% drop in performance with Windows 11. On the other hand, the Intel Xeon W-3375 38 Core saw a 13% performance gain with Windows 11. That isn't as large as the gain the W-3375 saw in After Effects, but it is enough to bring it roughly on par with the Intel Xeon W-3365 32 Core.

Just like After Effects, DaVinci Resolve behaved as expected in Windows 11 with no bugs or issues. However, it is worth pointing out that our benchmark runs Resolve in a headless mode, so if there are any UI-related bugs, we wouldn't have encountered them.

Should you Upgrade to Windows 11 for Video Editing?

We feel like a broken record at this point, but it is worth mentioning once again that this article only reflects how Premiere Pro, After Effects, and DaVinci Resolve Studio perform and behave immediately after the Windows 11 launch. Adobe in particular has made it known that Premiere Pro and After Effects do not yet have official support for Windows 11, so some of the bugs and performance drops we saw are very likely not what you will see once official support is added. In addition, Windows 11 is simply new and will require a bit of time before the kinks are all worked out.

No matter what, we recommend waiting to upgrade to Windows 11 until the applications you use have official support. And if you are thinking about upgrading to Windows 11 anyway, we would heavily caution you against doing so at this time. Not only did we run into a handful of bugs (the Premiere Pro HEVC import error being the most significant), but most users are more likely to see a small drop in performance than anything else.

If you want to get technical about it and average all of the performance gains and losses we saw in our testing, technically Windows 11 was faster than Windows 10 on average. But, it works out to only a 0.082% performance gain which is… not statistically significant. There are a few instances where performance was significantly better in Windows 11, but the biggest performance gains were for the Intel Xeon W-3375 38 Core, which is not at all a common CPU for video editing. For most users, you are more likely to see a small drop in performance than anything else.