Should you upgrade to Windows 11 for Rendering?

Written on October 8, 2021 by Kelly Shipman
Share:
Table of Contents

TL;DR: Is Windows 11 ready for Rendering?

Windows 11 is very new, and many of the most popular rendering applications have not release updates to take full advantage of what Windows 11 offers. Due to this alone, we recommend waiting to upgrade to Windows 11 until the applications you rely on are fully supported.

Our early testing shows in many cases, Windows 11 is actually slower than Windows 10 when it comes to rendering. Often any change is performance is minor, though in V-Ray CPU rendering, any CPU with more than 32-cores was significantly hindered. Only V-Ray's GPU based rendering showed any improvement across all platforms tested. What ever your renderer is, we recommend waiting for official word from the application's developer that Windows 11 is ready for production work.

In this article, we will be looking at a few of the most popular 3d rendering applications to see how they perform and behave in Windows 11 - namely Redshift, V-Ray, Octane, and Cinebench. Many of these applications may not officially support Windows 11, and we are likely to see updates on both the application side and OS side in the coming weeks.

Once Windows 11 support is officially added to these applications, things are very likely to change. But, we know a lot of users are excited to upgrade to Windows 11, so we wanted to see how things are in these early days post-launch. 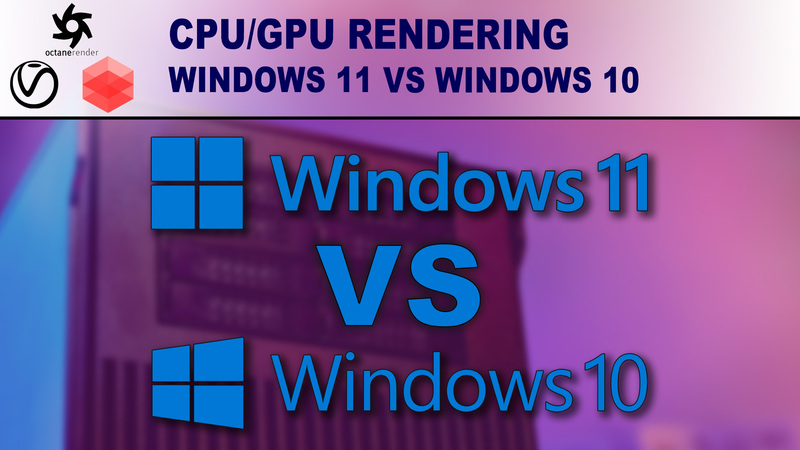 Looking for a rendering Workstation?

To examine rendering performance in Windows 11, we will be using the respective benchmarks available for each application. For the sake of simplicity, we will be covering both CPU and GPU-based rendering in this article. 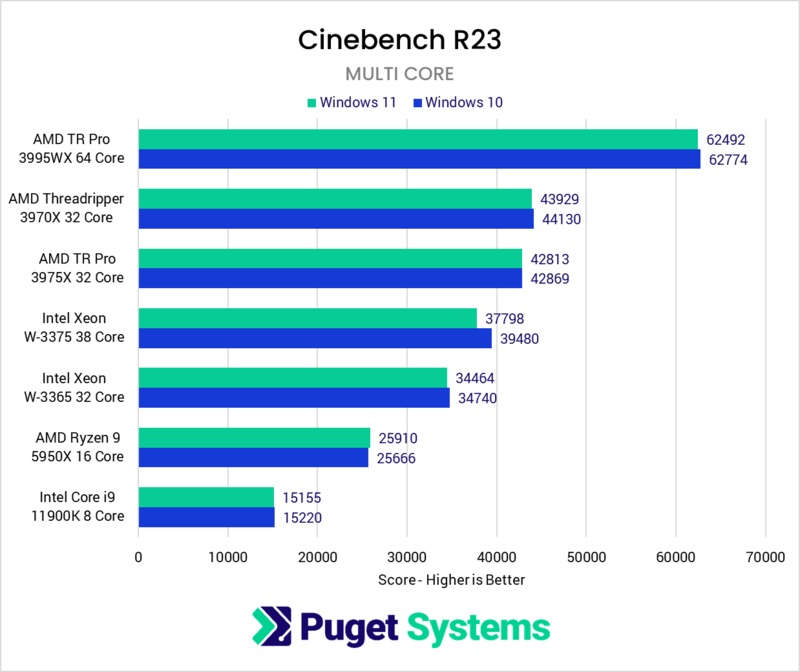 Starting off with Cinebench, we see very little change between Windows 10 and Windows 11. Some CPUs see slight improvements, some see slightly worse scores. The biggest performance loss we see is on the 38 core Xeon W-3375, but even then it was a decrease of roughly 4%. Hardly enough to matter, and could probably be overcome with a few settings tweaks. 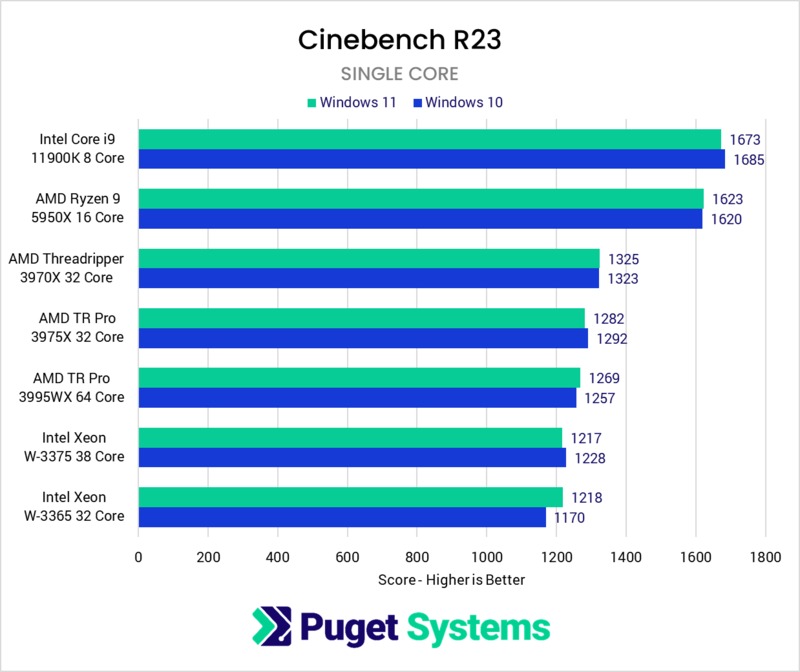 Similarly, in single-core performance, we see very little deviation from the Windows 10 scores. Some are ever so slightly faster, some slightly slower. All are close enough to be within the margin of error. 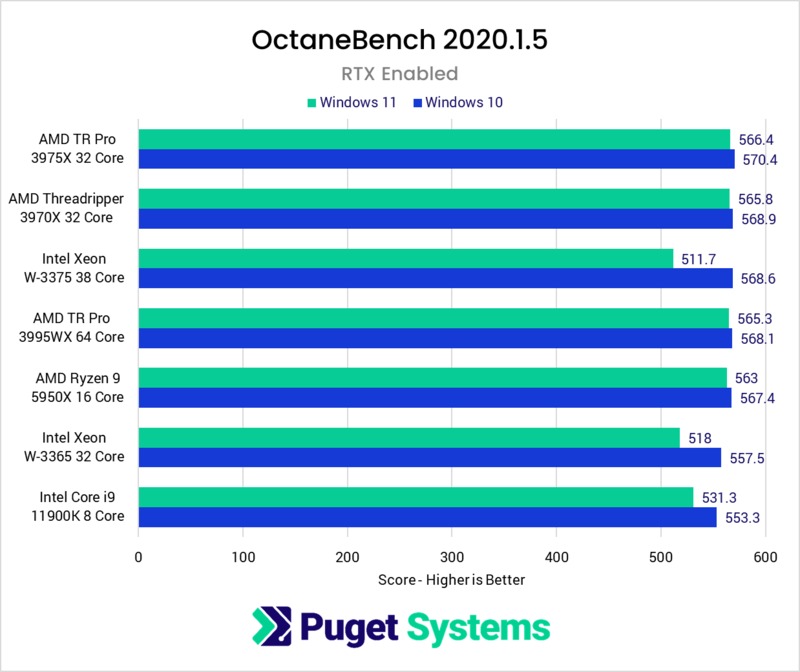 Octane is a GPU renderer, so we should see consistent scores from all systems, as they are all using an Nvidia RTX 3080. In Windows 10, all results are within the margin of error. However, in Windows 11, we see a few anomalies. All systems see a very slight drop in scores, however, the three Intel systems all see a bigger drop in performance. While any drop in performance is discouraging to see, these results should give Intel users pause if considering the jump to Windows 11. 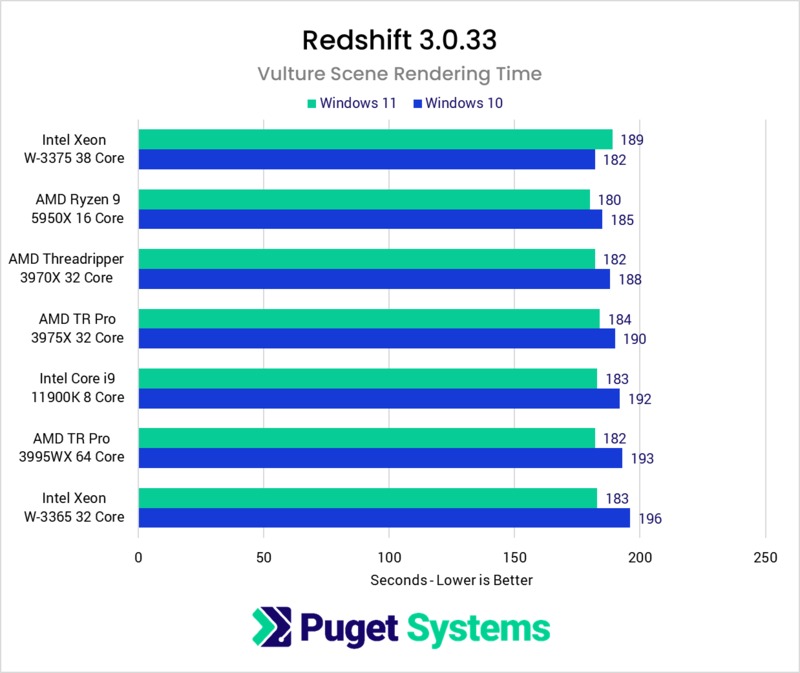 Redshift is another GPU-based renderer. Again, we see slight performance dips across the board. The one exception is the Intel Xeon W-3375 38 Core which was actually showed slightly improved times. We were able to repeat this score in multiple runs. Somewhat ironically, this was using Window’s “Balanaced” power plan, but switching “High Performance” returned a lower score. This isn’t the ideal system for GPU rendering anyway, but it is an interesting result. 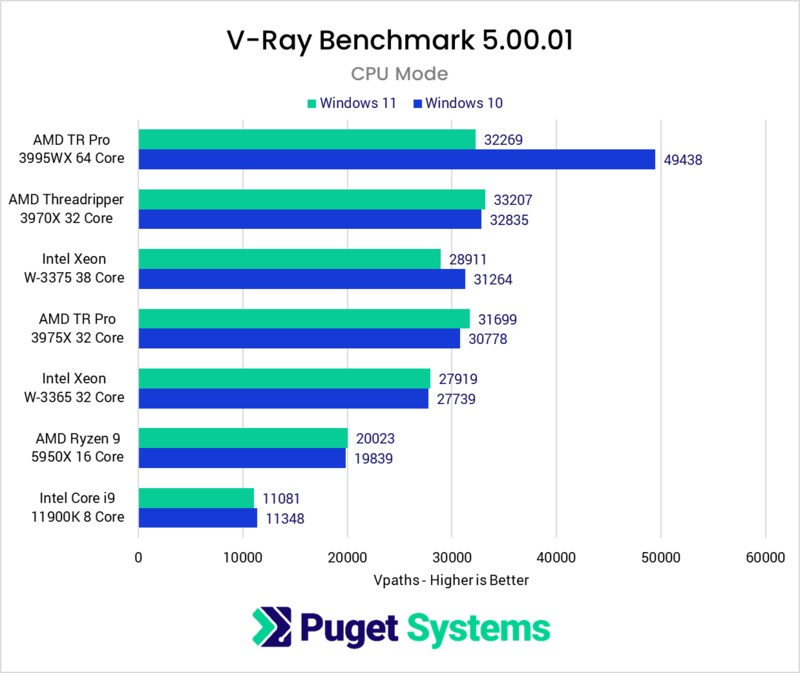 V-Ray offers both CPU and GPU options. Looking at CPU rendering first, we see our biggest discrepancy yet. The 64-core/128-thread AMD Threadripper Pro 3995WX sees significantly lower performance in Windows 11 than it does in Windows 10. The score matches that of it’s 32-core sibling, the 3970X. Watching task manager during the test confirms that only 32 cores are active at any given time. This tells us that the V-Ray/Windows 11 combo has an issue with using more than 64 logical processors. This was verified with a non-pro Threadripper 3990X. We can see a similar effect with the Intel Xeon X-3375, though not as pronounced as it is only losing 6 cores. Users of CPU rendering tended to gravitate towards the 64-Core Threadripper because of its amazing performance. These users should steer clear of Windows 11 until a fix is in place. 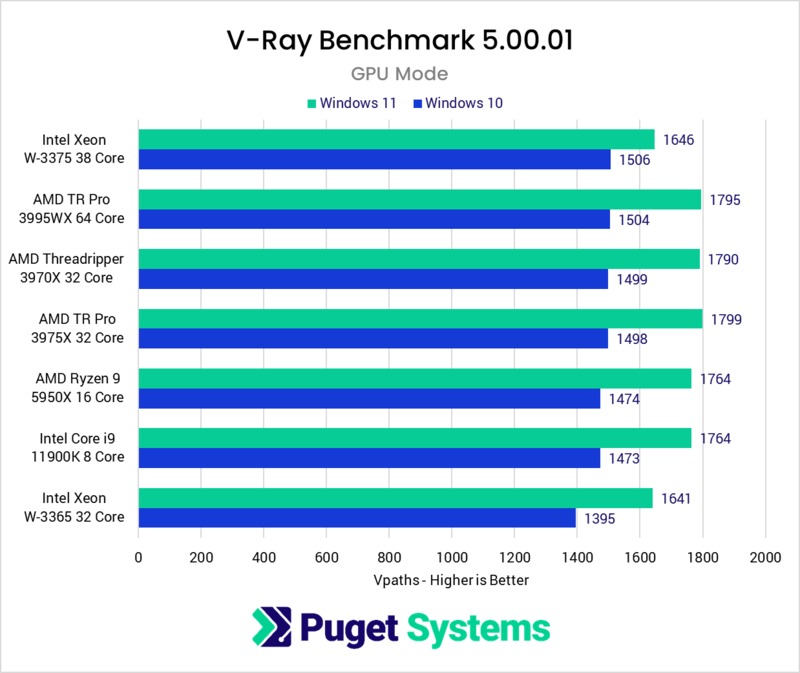 Turning to V-Ray’s GPU performance, we see another interesting result. Across the board, we see a big performance improvement. Windows 11 sees an average increase of 18% V-Ray’s GPU rendering no matter which CPU is selected. This is a highly encouraging result. We will have to see if this is across all video cards but for now, this might give V-Ray GPU users a nudge to check out Windows 11 soon, or at least check with Chaos Group on their plans.

Should you Upgrade to Windows 11 for Rendering?

Again we’d like to stress that this is a very early stage for an OS, and many things will be subject to change in the coming weeks and months. This article aims to give a very brief snapshot of the state of Windows 11 at launch, and only looks into the rendering performance. There are many other factors to consider before upgrading.

No matter what, we recommend waiting to upgrade to Windows 11 until the applications you use have official support. And if you are thinking about upgrading to Windows 11 anyway, we would heavily caution you against doing so at this time. In most cases, we saw worse performance in Windows 11, sometimes very minor, sometimes significant. The major exception is V-Ray GPU rendering. As is typical with an OS launch, there will be many performance improvements and bug fixes coming from both Microsoft and the software developers in the coming weeks and months.