In Cinema 4D, modeling and animation workflows will be greatly improved by the single core performance of the new Intel 12th gen CPUs. The multi-core capabilities have also dramatically improved, making these new CPUs very competitive, and sometimes better than AMD's Ryzen CPUs. The new DDR5 looks to further improve these results once it becomes more widely available. This makes for a great platform for someone that is using GPU rendering, and is even ready for the next generation of PCIe 5.0 video cards.

The difficulty with using mixed cores is that the operating system needs to be able to dynamically decide what processes are run on each core. For example, it would be less than ideal if Cinema 4D was to run on an E-core because your web browser decided to take up all the P-cores. Luckily, Intel has a technology called "Thread Director" to handle this in the background, working with the OS in order to dynamically adjust what processes are run on each core. 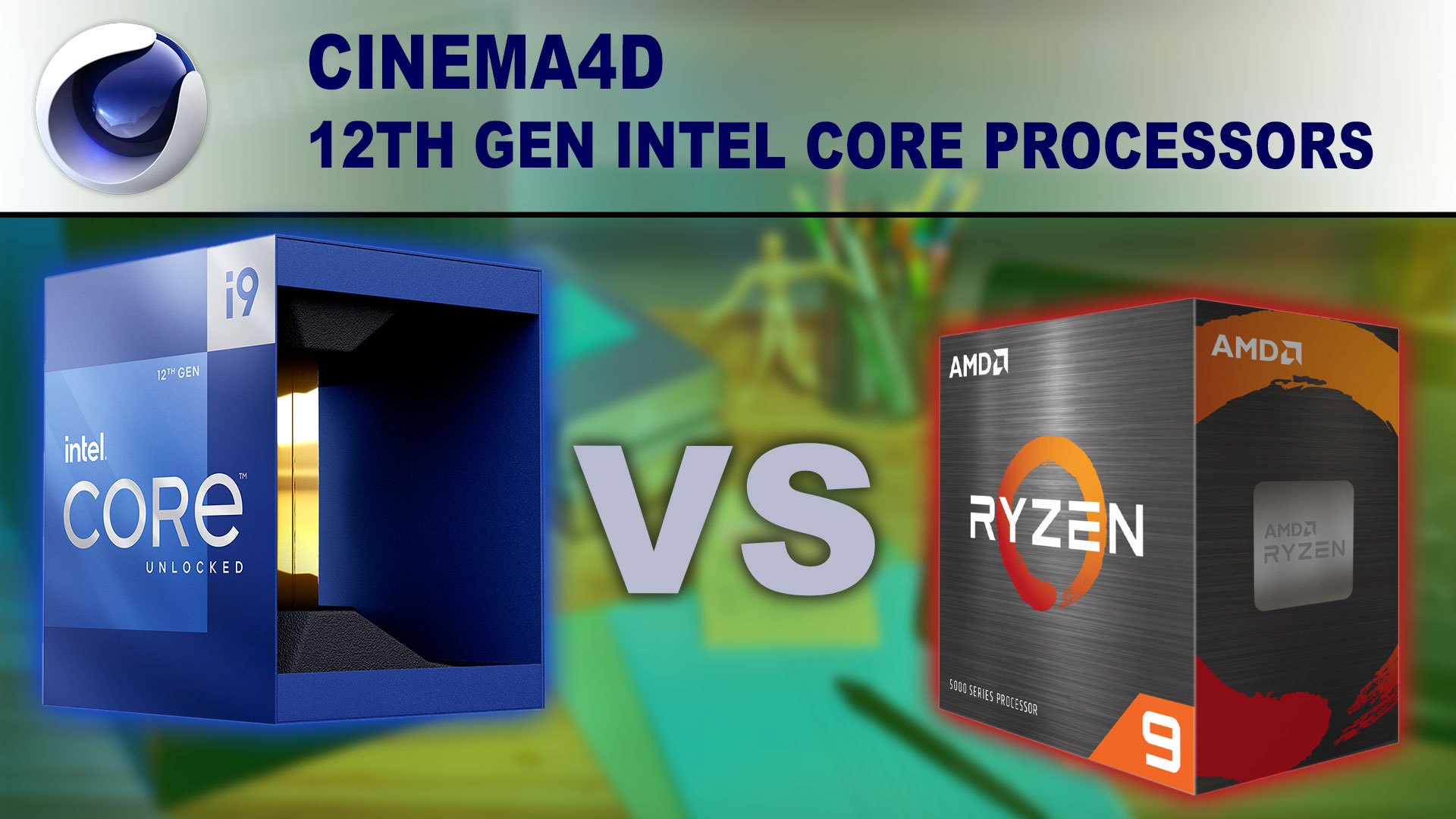 In this article, we will be examining the performance of the new Intel Core i9 12900K, i7 12700K, and i5 12600K in Premiere Pro compared to a range of CPUs including the Intel 11th Gen and AMD Ryzen 5000 Series processors. If you are interested in how these processors compare in other applications, we also have other articles for V-Ray, Unreal Engine, and several other applications available on our article listing page.

Windows 11 had a rocky start with AMD CPUs and processors with more than 32 cores, but with the latest updates, we found the difference between Windows 10 and Windows 11 with these Ryzen CPUs to be negligible for Cinema 4D. We will have those results, and similar testing examining Intel 12th Gen performance on Windows 10, in an upcoming "12th Gen Intel Core – Windows 11 vs Windows 10" article. 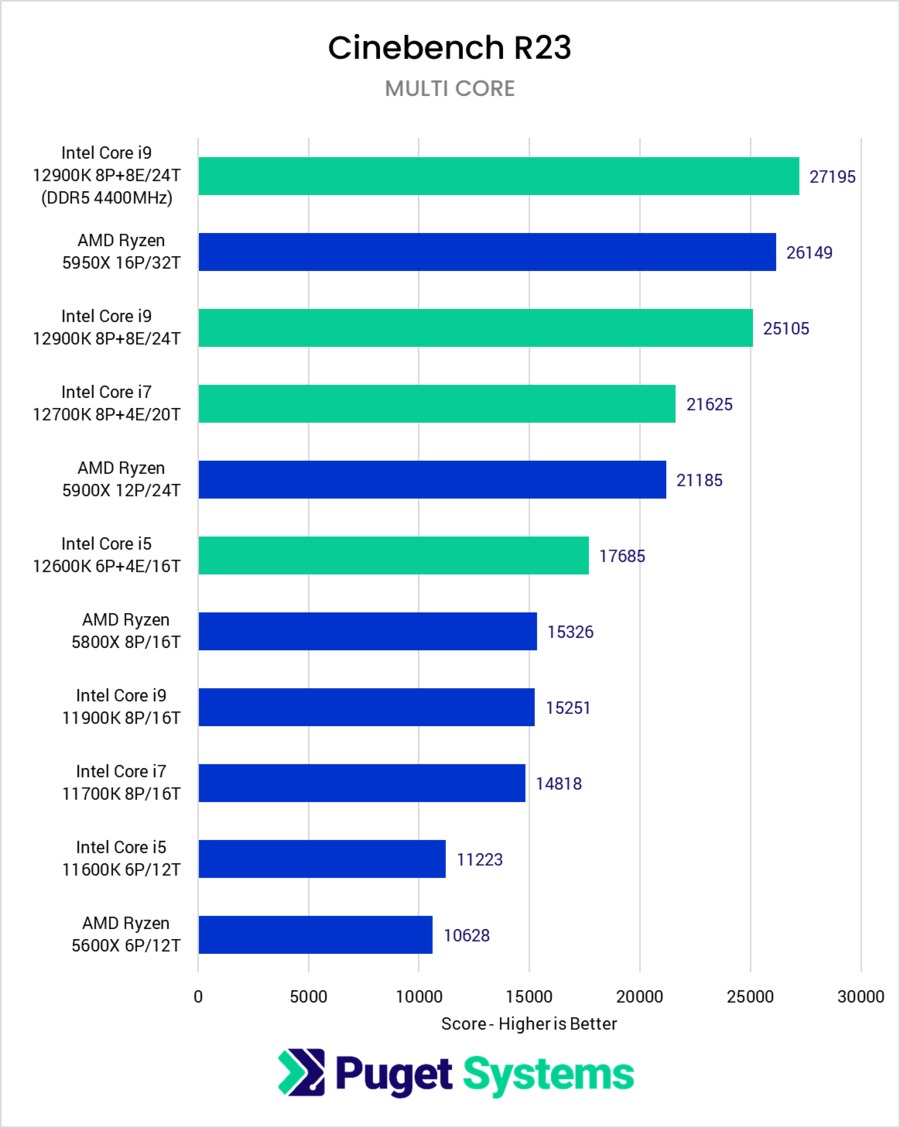 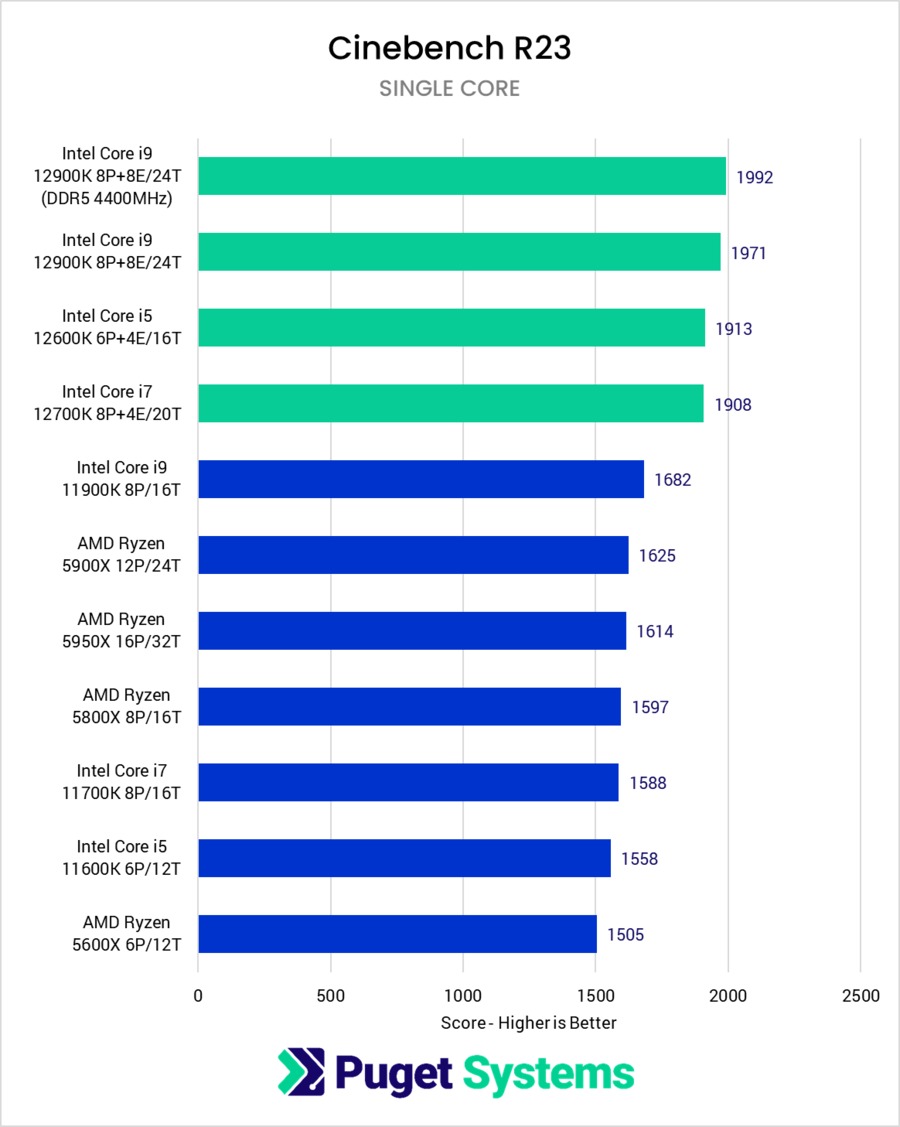 The improvements over the last generation are quite impressive when it comes to rendering. The 12900K is 65% faster than the last generation’s 11900K. That jumps up fo 78% faster if we look at the new DDR5 platform. Even the lowest tier we tested, the Core i5 12600K manages to beat out the previous flagship CPU. Compared to the competition from AMD’s Ryzen CPUs, the results are still impressive. The Intel 12900K with DDR4 is roughly 18% faster than the similarly priced AMD Ryzen 5900X, and the DDR5 equiped system is just a hair faster than the 5950X wich costs $200 more. A step lower, and the 12700K is nearly as fast as they 5900X, while costing much less. I

The single-core score gives us a look at modeling and animation performance. While the improvement is not as drastic as the multi-core score, we still see a 17% improvement over the previous generation. This is great news to anyone that uses a GPU rendering solution such as Redshift.

For CPU-based rendering, the number of cores is the primary concern. Intel jumped from 8 cores/16 threads as their top-end CPU of the last generation to 16 cores/24 threads as the top CPU of this generation. That upgrade gives the new CPU a 65% increase in rendering speed over that last generation. The improvements to clock speeds also allow for a lead over the similarly priced, 12 core/24 thread AMD Ryzen 9 5900X. When we factor in the upcoming DDR5 platform, that improvement jumps to 78% and manages to outperform the Ryzen 5950X. It will be interesting to see how the other CPUs perform with DDR5.

However, this only represents CPU rendering performance, a field dominated by Threadripper which offers up to 64 cores and 128 threads. Many Cinema 4D have use a GPU renderer such as Redshift.. For users that are looking for GPU rendering, but also need a high-performance modeling/animation workstation, these new CPUs make for a tantalizing solution. Not only do you get great single-core speeds to help with modeling/animation, but the system will also be ready with PCIe 5.0 once video cards become available.

Keep in mind that the benchmark results in this article are strictly for Cinema 4D and that performance will vary widely in different applications. If your workflow includes other software packages (we have similar articles for Unreal Engine, After Effects, DaVinci Resolve, and more), you need to consider how the system will perform in those applications as well. Be sure to check our list of Hardware Articles to keep up to date on how all of these software packages – and more – perform with the latest CPUs.