Intel regained a lot of ground with AMD when it comes to Unreal Engine performance. Their new Big/Little core architecture has given them them anywhere from 50 to 75% better scores in our testing compared to the previous generation. However, these massive gains are just enough to catch up to AMD's Ryzen CPUs. This new platform from lintel brings with it several new technologies such as DDR5, PCIe 5.o, and more. DDR5 is not yet widely available, that leaves the only option to use these new CPUs with the existing DDR4 RAM. Unfortunately, this combination does not make enough of an improvement to recommend it over the AMD Ryzen CPUs. If you are considering going with Intel, it would be best to wait for more DDR5 testing and availability

However, the difficulty is that the system needs to be able to dynamically choose what tasks are run on each type of core. For example, it would be less than ideal if Unreal Engine was to run on an E-core because your web browser decided to take up all the P-cores. To account for this, Intel has also launched a technology called Thread Director, which works with the OS in order to dynamically adjust which processes are run on each core. 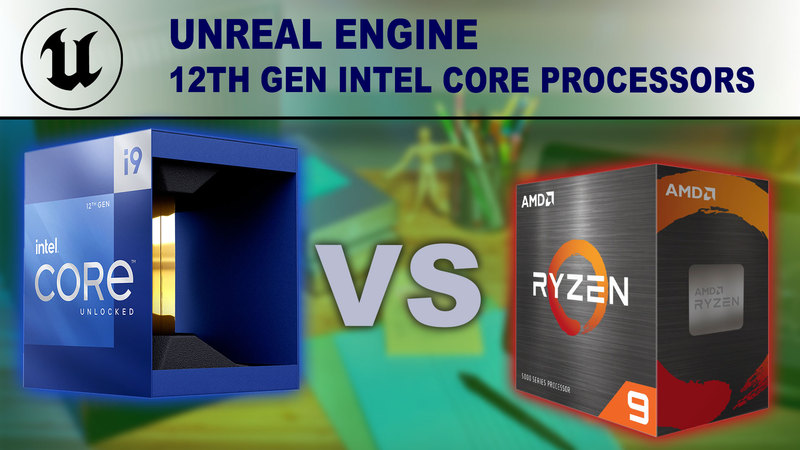 In this article, we will be examining the performance of the new Intel Core i9 12900K, i7 12700K, and i5 12600K in Premiere Pro compared to a range of CPUs including the Intel 11th Gen and AMD Ryzen 5000 Series processors. If you are interested in how these processors compare in other applications, we also have other articles for Cinema 4D, V-Ray, DaVinci Resolve, and several other applications available on our article listing page.

Looking for a Unreal Engine Workstation?

Windows 11 had a rocky start with AMD CPUs and processors with more than 32 cores, but with the latest updates, we found the difference between Windows 10 and Windows 11 with these Ryzen CPUs to be negligible for Premiere Pro. We will have those results, and similar testing examining Intel 12th Gen performance on Windows 10, in an upcoming "12th Gen Intel Core - Windows 11 vs Windows 10" article. 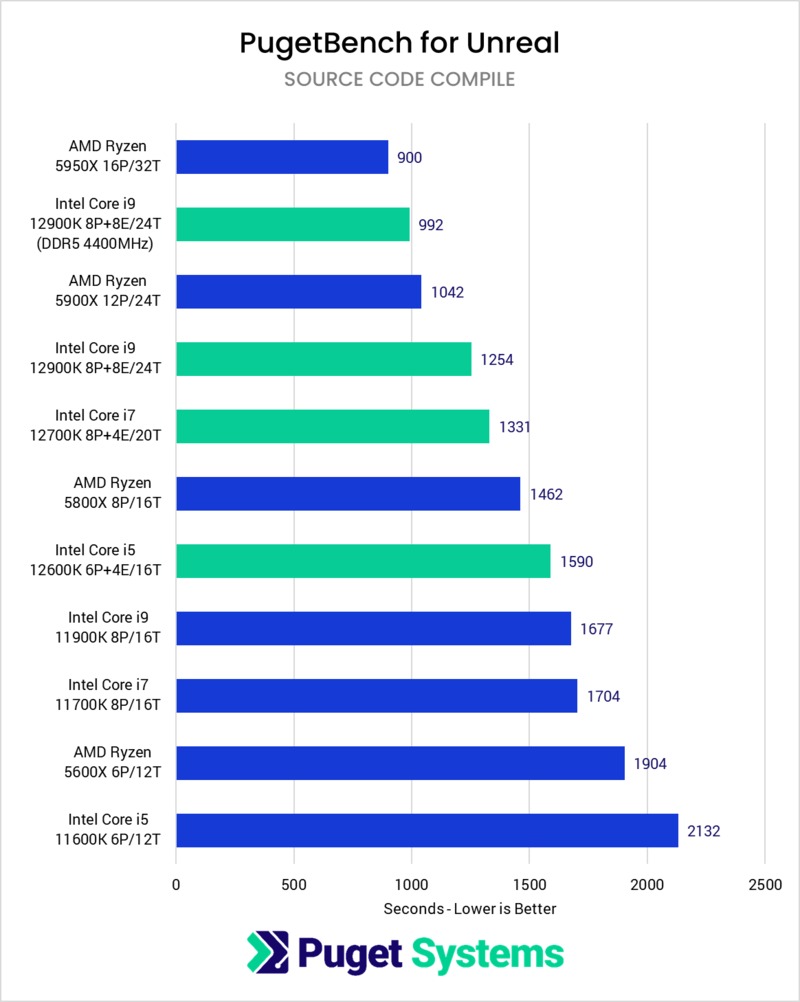 Compiling code in Visual Studio can really favor CPUs with a large number of cores. This is pretty evident in these results. The more cores and threads a CPU has, the faster it performs. This test also shows the potential of the new DDR5 RAM. With the existing DDR4 RAM, the Intel Core i9 12900K is not able to keep up with the AMD Ryzen 9 5900X, even though both CPUs feature 24 threads. This is likely due to the differing numbers of Performance cores. Moving the CPU to the DDR5 platform, the 12900K sees a significant increase in speed edging out the 5900X.

This trend continues down the stack. Wherever there are equal threads between CPUs, AMD leads by a decent amount. It’s hard to say at this point if this is an issue with the new Thread Director, or if Visual Studio is just more suited to AMD’s designs. It will be very interesting to see the full results of the DDR5 testing. 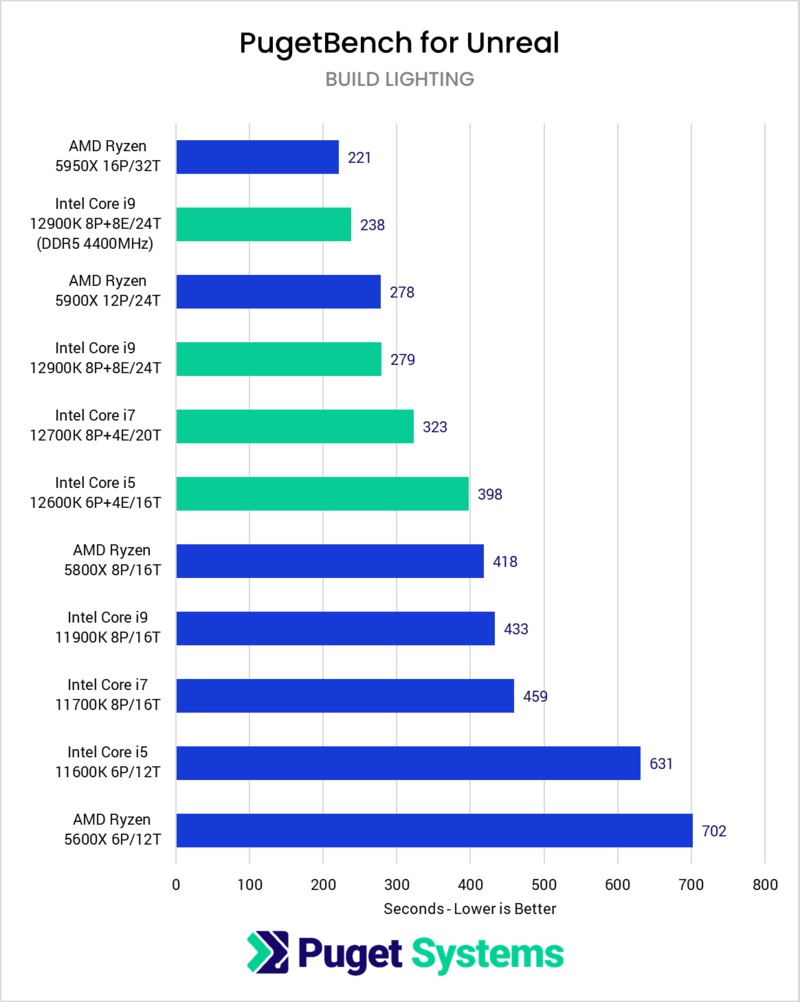 Light baking is still a very integral part of game development and ArchVis. While GPU lightmass has greatly improved and looks to be the future of this process (not to mansion the real-time improvements of UE5’s Lumen) CPU based light baking is still part of many users’ workflows. Here we see things level off between Intel and AMD. While the top of the line 5950X holds a clear lead, the12900k with DDR4 and 5900X are tied. Upgrading the Intel CPU to the DDR5 platform does provide a good performance increase.

More interestingly, the 12600K manages to outperform the 5800X while costing $160 less. DDR5 may potentially increase that lead even further. That is a very good sign for the budget minded game developer. 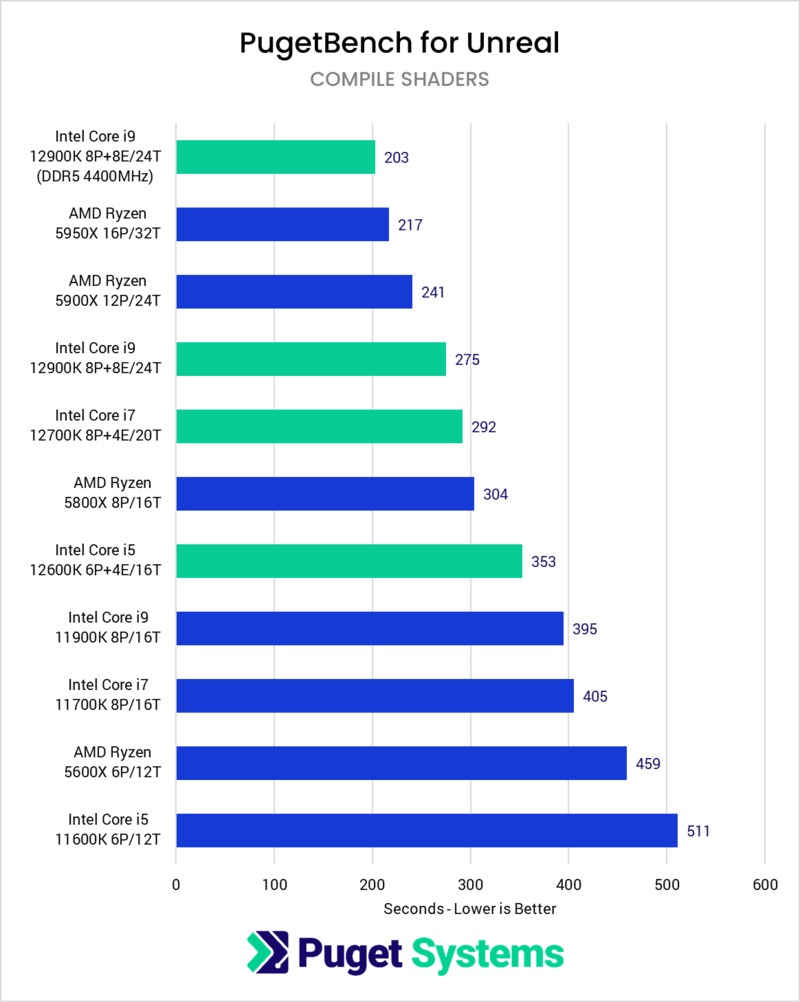 Compiling shaders is something that everyone working with Unreal has to contend with. Some only have to wait for a few shaders to compile ever once in a while, others see thousand on a regular basis. Because this is a lot of small tasks that can happen in any order, it lends itself to high core count CPUs. Once again, Intel shows dramatic improvement generation over generation. Even their lower end i5 12600K is faster than the last generation’s top-end 11900K.

Looking at the DDR5 results is particularly interesting. For the first time in this benchmark the Intel 12900K takes the top spot. Hopefully this is a glimpse into what DDR5 has in store. As the platform continues to mature, and faster RAM comes available, we should see even better compile speeds.

How many frames a system is able to put out is heavily tied to the GPU, though the CPU does have some impact. In our test scene, running at 4k with Ray Tracing enabled on an Nvidia RTX 3080, we do see the 12900K take the top spot by roughly 2%, not really enough to make a difference in anybody’s workflow or even be perceivable by the user. In fact, the difference between the fastest CPU tested and the slowest is only 6%.

If we drop down to 1080p and turn off RTX, we can build a bottleneck where the GPU is processing frames faster than the CPU can keep up with. This shows differences in how the CPU is able to move data around when the GPU isn’t involved. Now we see Intel extend its lead. There isn’t a use case where this is the primary factor to consider, but it may have an impact on external uses such as mocap data. 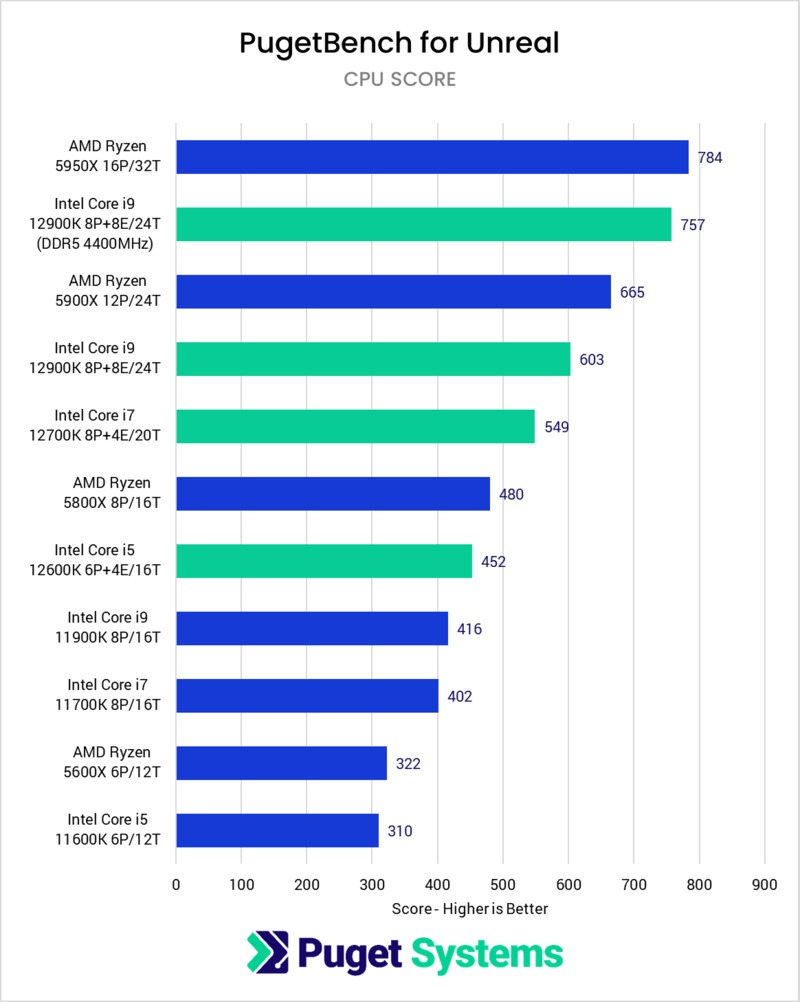 Intel made huge strides with this new CPU architecture, seeing massive performance gains across the board. Unfortunately for Intel, They are playing catch up with AMD. When equipped with DDR4, Intel doesn't quite match AMD's performance. When equipped with DDR5, Intel marches ahead when matched by price. The only question is when DDR5 will become readily available, and where will prices land. If looking for best performance at any price, AMD is still in a firm lead with not only the Ryzen 5950X, but also the Threadripper line, a big favorite among Unreal users.

For Unreal, most development related tasks favor CPUs with lots of threads. In all our tests, the AMD Ryzen 5950X scores the top spot. After that, because Intel is launching this CPU with support for both DDR4 and DDR5 RAM, things get complicated. Using a motherboard that supports DDR4, which will be much more readily available at launch, Intel lags behind AMD. However, if using a DDR5 compatible motherboard, the early impression is that it will be a much closer fight. We still have some testing ahead of us on this, so keep your eye out for those articles.

That said, if you are looking for the fastest CPU for compiling shaders, code and building lighting, AMD’s Threadripper is still the top choice.

Keep in mind that the benchmark results in this article are strictly for Unreal Engine and that performance will vary widely in different applications. If your workflow includes other software packages (we have similar articles for Cinema 4D, After Effects, DaVinci Resolve, and more), you need to consider how the system will perform in those applications as well. Be sure to check our list of Hardware Articles to keep up to date on how all of these software packages - and more - perform with the latest CPUs.