Skip to content
Always look at the date when you read an article. Some of the content in this article is most likely out of date, as it was written on February 9, 2009. For newer information, see our more recent articles.

The latest powerhouse CPU offering from Intel is here. The Intel Core i7 — a quad-core processor available in three different speed configurations that is really taking the computing world by storm. Several new features have been added to this processor, such as on-chip DDR3 memory controller, smart cache, and HD boost. Of course, with all the extra features and power comes the issue of how to keep it cool. The Core i7 may be powerful, but it is also very hot running. From the stock heat sinks and fans, to liquid cooled solutions, the cooling possibilities are many. Unfortunately we can’t test them all, so in this article we’ll take a look at 4 popular cooling solutions and how they fared.

This is the standard fan that comes with the Core i7 CPU. Designed for quiet operation and enough cooling to get you by at stock speeds. Surprisingly, in our test this cooler didn’t fare the best, but it wasn’t the worst!

The Nexus LOW-7000 cooler combines some of the most advanced technologies in the market used for CPU coolers. Heat pipes, SkiveTek and ultra-thin fins combined with a real silent PWM controlled fan delivers ultimate performance which has never been this quiet before. The 120mm fan is PWM controlled and the speed can vary between 500 and 2000 RPM creating a noise-output of an inaudible 15 dB(A) up till a still truly quiet 24 dB(A)

We were interested in this cooler for our low profile HTPC setups. I was fairly surprised at the result we saw on this one. At an average of about 90* Celsius, it was the lowest performing solution we tested. 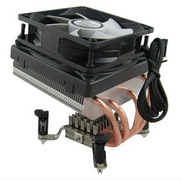 The top-flow cooler “Silent Spirit” follows an open frame structure concept whereby both design and dimensions have been improved to eliminate humming and buzzing noises while maintaining a compact overall size. The 92mm fan has been chosen for silent operation and high airflow and comes with an intelligent PWM control to allow users to set the fan speed in their BIOS accordingly. In addition the anti-vibration fan mounts are made of high quality rubber thus guaranteeing a long life span even during high temperatures.

This one was the second best in our testing, it didn’t quite beat the Hydro, but at only 2* C higher than the hydro and almost 20* C lower than the Nexus, and at a retail cost of around $35, it certainly is a very nicely priced cooling solution.

The Puget Hydro CL1 is a self-contained CPU liquid cooling solution. It has a lot of the benefits of liquid-cooling: better temperatures (which allows for overclocking) and fairly quiet operation, but also has the benefits of air-cooling: the ease of installation and maintenance. The radiator screws in place over the rear 120mm fan in your case. By default, the rear fan is usually left as an exhaust. Through our testing, we have found that in cases like the Antec P182 (which has a top exhaust fan), the cooler performs much better by reversing the rear fan and turning it into an intake. Since the case has a top exhaust fan, the impact on system temperatures is acceptable. 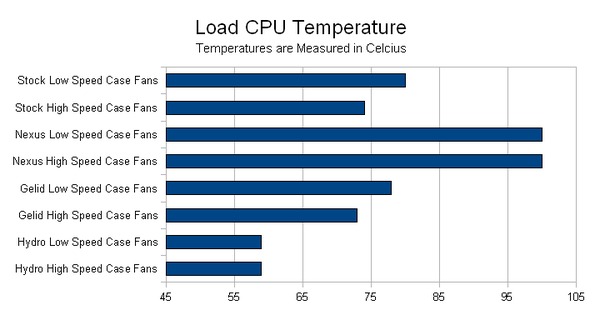 These graphs represent the idle and load CPU temperatures over the course of testing. It’s easy to see the winners and losers here — the Nexus ran much hotter than the others while the Puget Hydro CL1 was the best. The comparison between the Intel Stock heatsink and the Gelid Silent Spirit is interesting. Though the Gelid only cooled a few degrees better, it was significantly quieter. While the Puget Hydro CL1 is the clear pick for cooling performance, the Gelid Silent Spirit could also be a good choice in lower power situations when noise level is a concern.

In terms of our personal recommendations, the Puget Hydro gave us the best overall results, the Gelid Silent Spirit ran a close second. Considering price and noise levels the Gelid certainly is a good solution for the i7. The biggest surprise here was the Nexus LOW-7000. At an average temperature above 90* Celsius I wouldn’t consider this a good option for Core i7, though it still could be perfectly adequate for lower power 775 CPUs.
Tags: Cooling, Performance, Processors, Products