Skip to content
Always look at the date when you read an article. Some of the content in this article is most likely out of date, as it was written on July 10, 2004. For newer information, see our more recent articles.

Okay, perhaps they aren’t ABSOLUTE evil, but many times they can be more problems than they are worth. How many times have you bought something advertising nearly a third off the purchase price if you simply mail in a card to the manufacturer? How often did you actually bother? Or are you like me and completely forget about the rebate until the last day of eligibility? 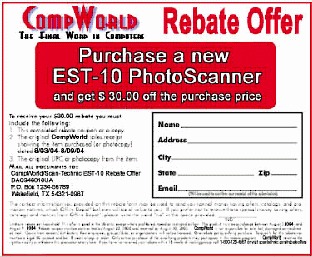 By all accounts, the rebate business is a steadily growing one with current estimates in the 6 billion dollar range. This is up from 1 billion in 1999. Lucrative, would you not agree? Almost makes you want to look into writing rebate programs, doesn’t it?

Rebates have become a popular way to sell a product, whether it is a computer game, a printer or an entire computer. And they are good for a company’s bottom line as well.

Why discount the price of that laptop computer when you can keep the normal $1600 price-tag and give the potential owner a mail-in rebate coupon for 30% off?

Unfortunately, those billions seem to be more and more at the expense of the consumers buying those rebated products. While some rebate offers are accepted and processed with few if any hassles, many more consumers are being denied the monies promised them by the company offering a rebate on their product.

A consumer advocacy website, http://www.badbusinessbureau.com, lists more than one thousand complaints of denied rebates, bounced rebate checks and poor customer service. The list goes on, for quite awhile.

Admittedly, some of these complaints would have become non-starters if the customers making the complaints had read through the terms of use for the rebates – but how often do you read the fine print? The others, in some cases, border on outright fraud. Several complaints concerned a company in New York that had apparently shut down the account used to pay out the rebate checks.

There’s also other well known rebate “offers” out there where you can get $100 or more off your computer. The catch, you have to sign up for an ISP you may not need or want for up to 3 years!

The federal government, in recent years has begun to respond to the multitude of complaints about bogus or unfairly denied rebate claims and going after several major manufacturers for not sending rebate checks.

The Federal Trade Commissions (FTC) Website lists a series of commonsense guidelines to dealing with rebate offers. (http://www.ftc.gov/bcp/conline/pubs/alerts/rebatealrt.htm). Some of what they suggest is written below:

As always, knowledge is your best defense. If you’re going to play the rebate game, do your homework. Make sure the company you’re buying from doesn’t have a history of problems with rebates. At the very least, do not go into the deal thinking that you’re paying 30% less for your product. You’re paying full price, and you’ll most likely be working very hard for that 30%.