The new AMD Ryzen 7000 Series processors do extremely well in Unreal Engine, showing a solid 35-39% multi-core performance gain versus the previous generation Ryzen 5000 Series. At the top end, this means the Ryzen 9 7950X outperforms the Intel 12900KS by 53% on average. The 7900X bests the Intel 12900K by 29% across the three tests. This makes Ryzen an solid choice.

Lower down the stack, the AMD Ryzen 7 7700X and Ryzen 5 7600X are neck and with Intel Core i7 12700K and i5 12600K with only a few percentage points between them. The 7700X did significan'ty falter in one test, but this may be resolved with an update or a different CPU. This makes either CPU an OK choice, though we dont typically recomend CPUs with this few cores for Unreal Engine.

Over the past few years, the demand for Unreal Engine systems has skyrocketed. Not just driven by tremendous growth in the video game industry, but a wide variety of industries have begun implementing real-time engines into their workflow. This is especially true for the film and television industry, and their pivot to Virtual Production. Many of the biggest performance hurdles faced by Unreal Engine users are improved with high core count CPUs. This is especially true if you are compiling the game engine source code, or compiling shaders large amounts of shaders.

However, many users aren’t compiling the full engine source code on a daily basis or dealing with 10s of thousands of shaders being updated by their 500-person dev team. They want to know what kind of performance they can expect with consumer-grade hardware. It is important to find that balance for your specific workflow. 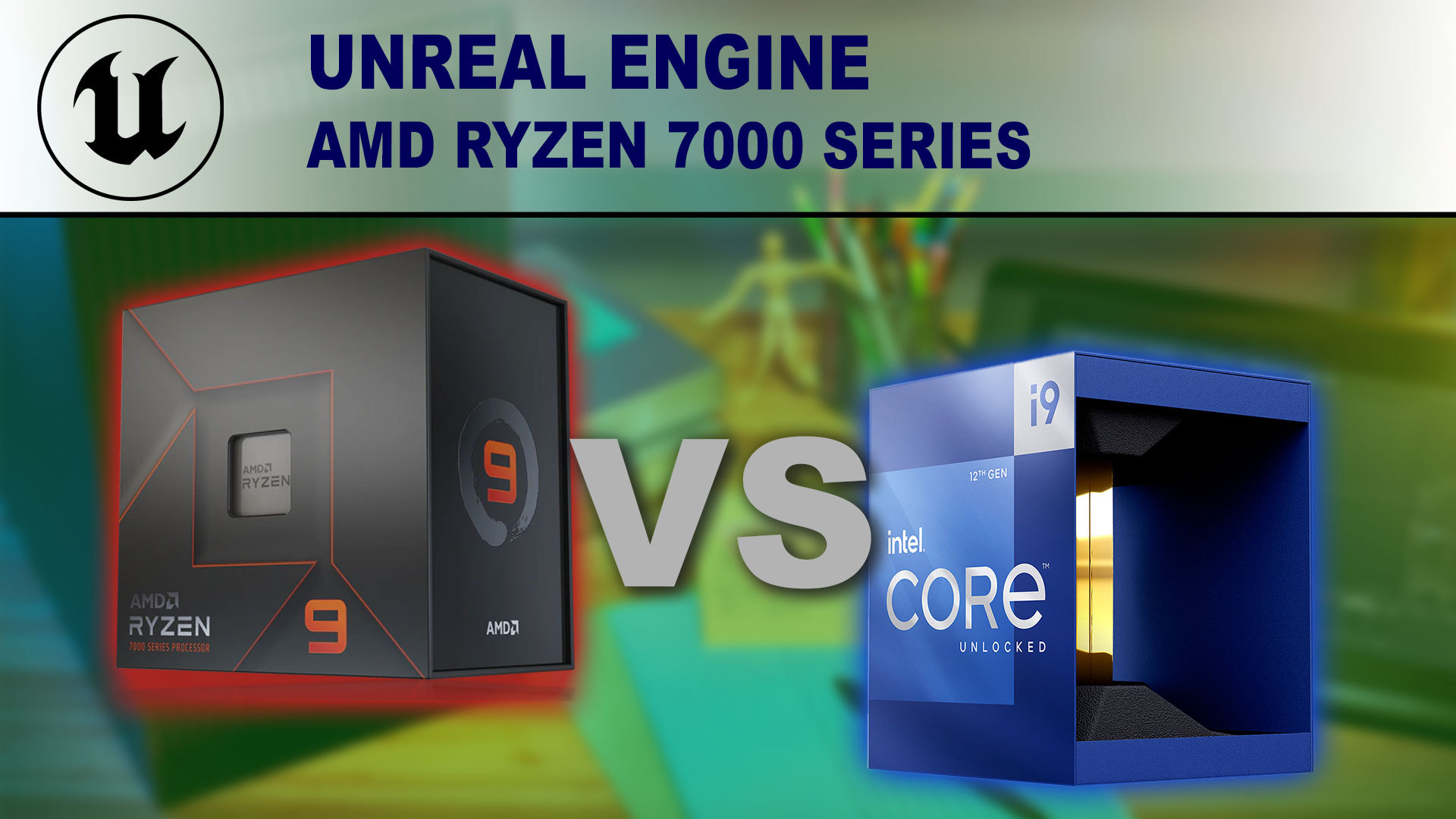 In this article, we will be using Unreal Engine and Visual Studio to examine the performance of the new AMD Ryzen 7000 CPUs and compare them to Intel’s 12th generation CPUs, as well as the previous generation Ryzen 5000 series. While we are including most of the primary models from each of these product lines, note that we are skipping the AMD Ryzen 7 5800X3D which features AMD's 3D V-Cache Technology. We have looked at this model in past articles, and found that for content creation, it is either on par or slower than the normal Ryzen 7 5800X model. 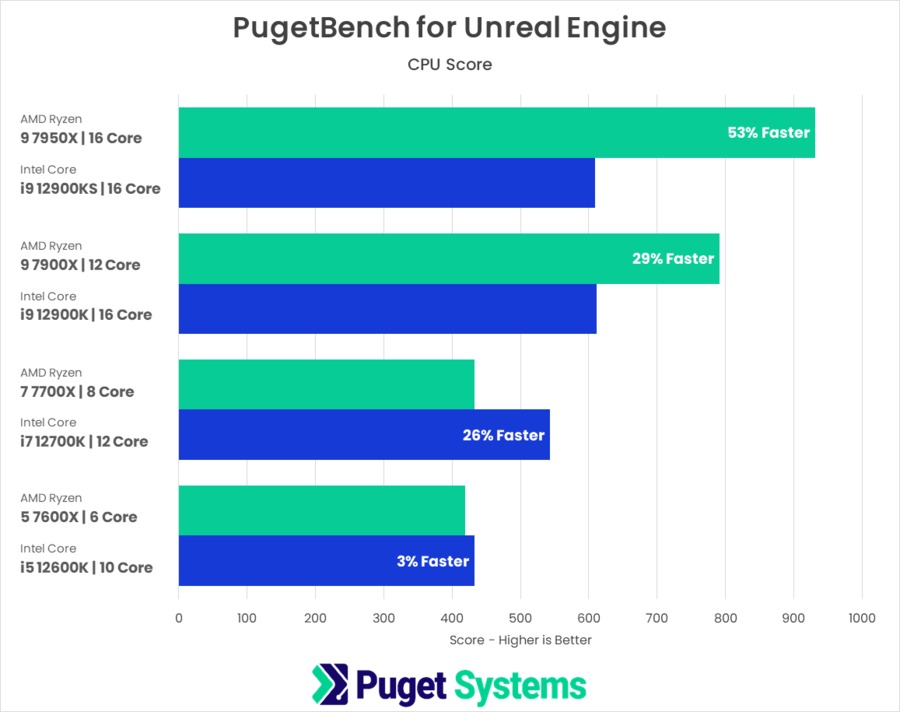 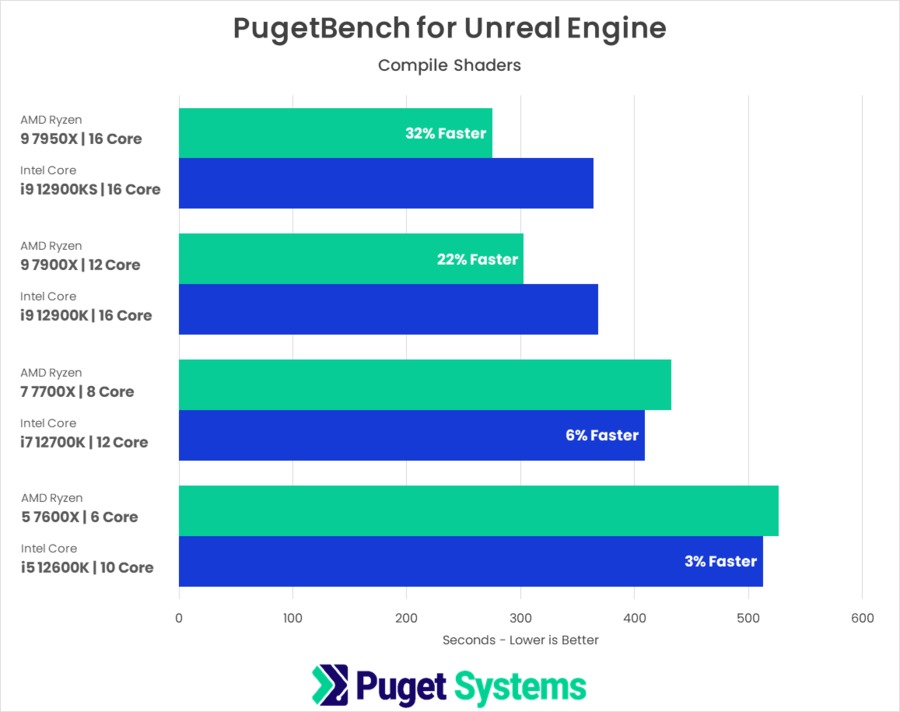 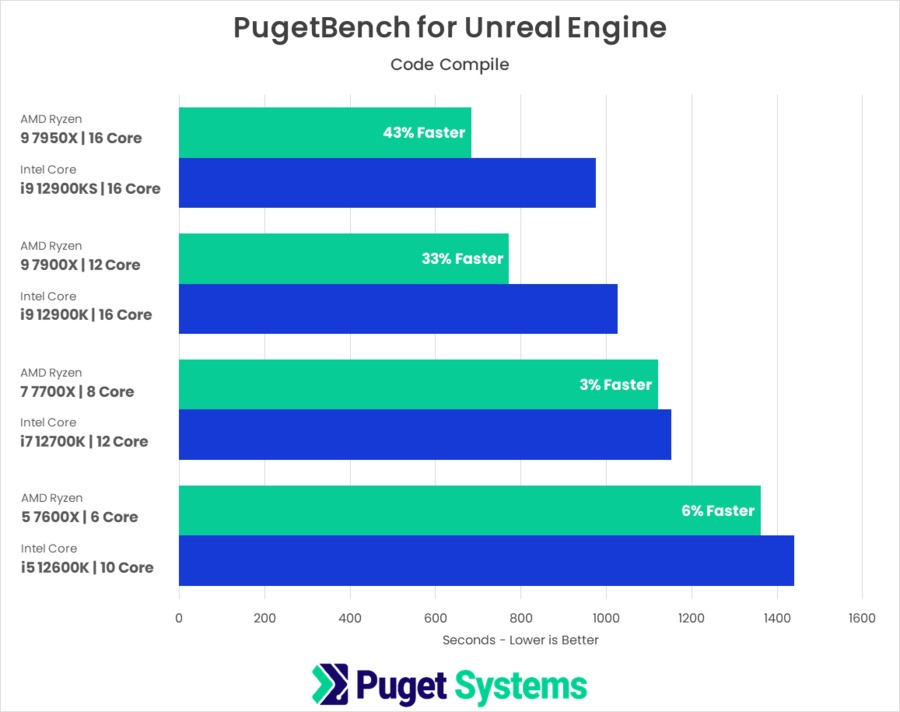 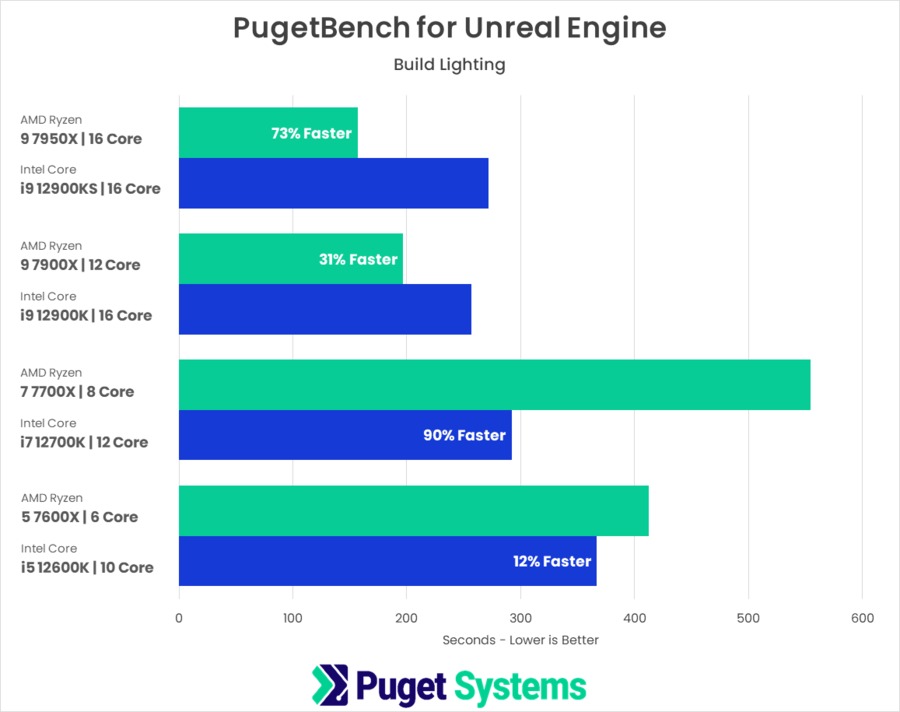 The three main bottlenecks Unreal Engine users struggle with are compiling the source code (whether to use a pre-released version or to package up a custom game project), light baking on the CPU, or just compiling shaders. AMD’s Ryzen 5000 already had an edge in these tasks.

Comparing the new Ryzen 7000 series to Intel’s 12th Generation CPUs, we see AMD take a commanding lead in the top end. On average, the Ryzen 7950X is 53% faster than Intel’s top-of-the-line 12900KS. The biggest difference here is in light baking, where AMD’s new chip is 73% faster than Intel’s. Granted, many users are adopting GPU Lightmass, but there are still a lot of reasons to stick with CPU-based light baking. Shader compiling the 7950X is 32% faster than Intel’s best offering. Keep in mind that while the Intel 12900KS and AMD 7950X have the same number of CPU cores, They are not built the same. Intel is using a hybrid architecture where 8 performance cores have hyperthreading, while the remaining 8 efficiency cores do not. This means that while it has 16 cores, it only has 24 threads, while the Ryzen 7950X has 32. This difference counts for much of the lead the 7950X possesses.

The Ryzen 7900X has 12 cores and 24 threads, the same number of threads as the Intel 12900K, yet is 29% faster. This highlights the differences in the CPU architecture, as well as general IPC and clock speed improvements in the new Ryzen CPUs. The 7900X is a little more balanced with all three tests being roughly 30% faster than the 12900K.

Moving on to the lower-end parts, the story changes and Intel takes in the lead. This says a lot about the performance of Intel’s parts and the amazing value they provide. The new Ryzen 7700X is 26% slower than the Intel 12700K, but with a large caveat. In source code compile, and shader compile the 7700X was only 3% and 6% slower respectively. However, in light baking, Intel’s 12700K was 90% faster. We ran this test a total of 14 times, with wildly different results, the time listed is the average of those. We updated the BIOS, reseated the cooler, even switched to a different CPU for a while then came back. This is the only CPU that had any variance, and the only test across 10 different applications that had any variance. I suspect that either something was up with our CPU, or a bios and/or software update will fix this in the future. 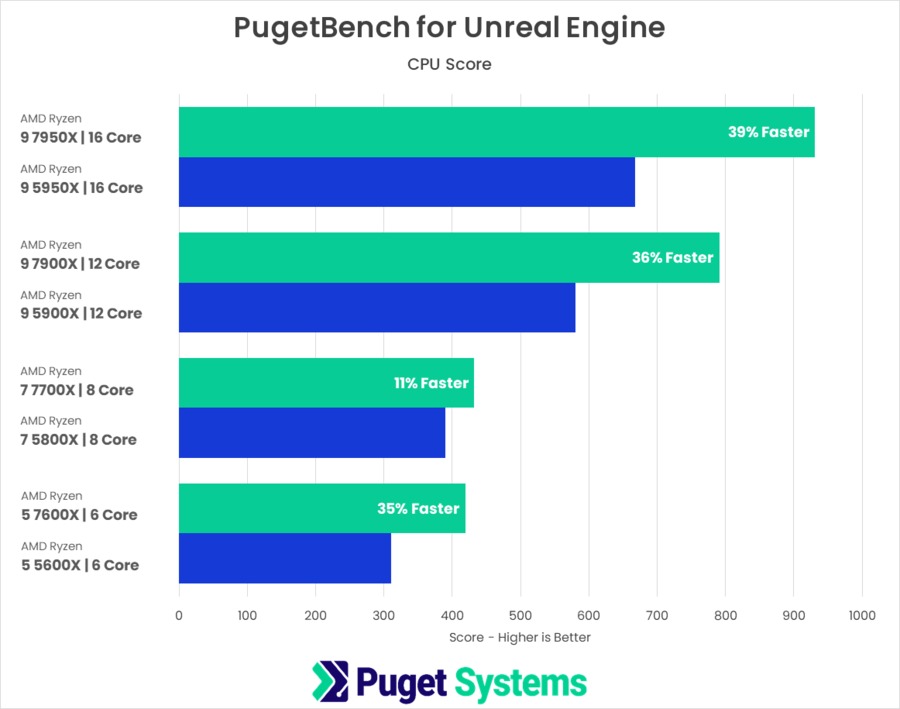 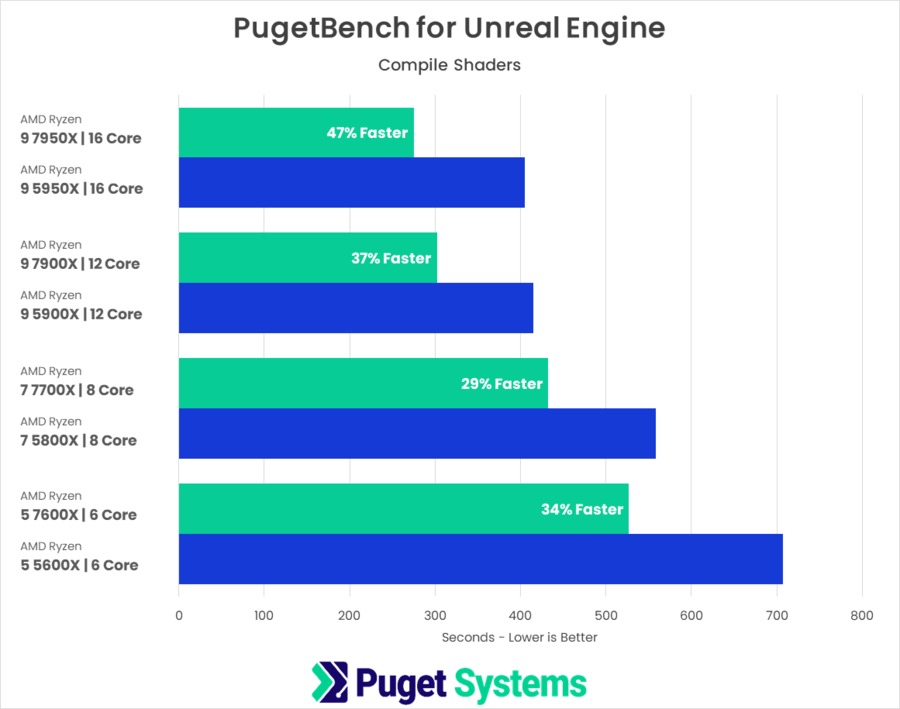 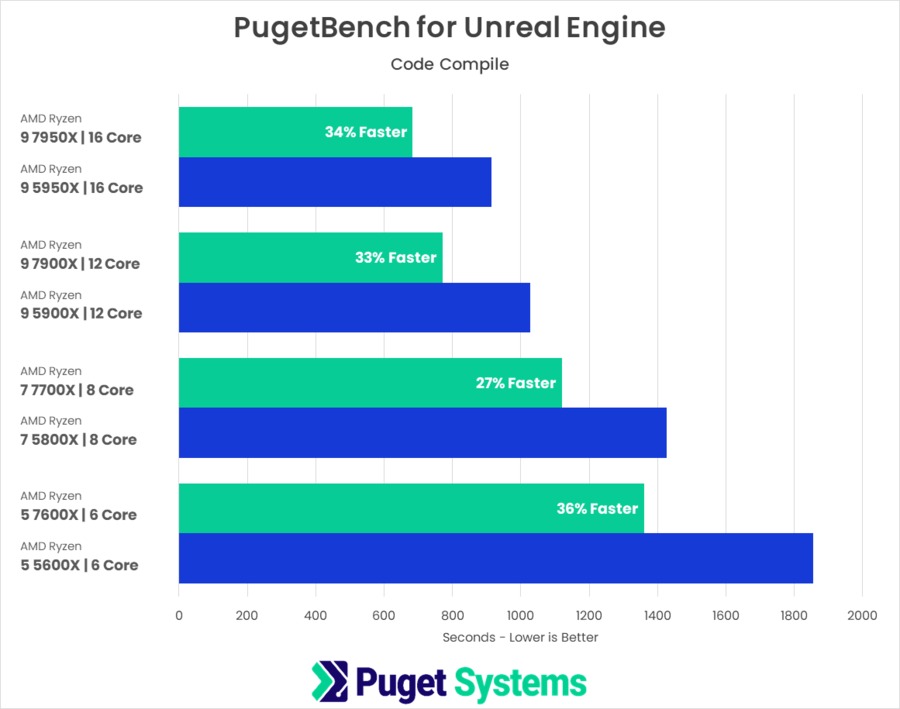 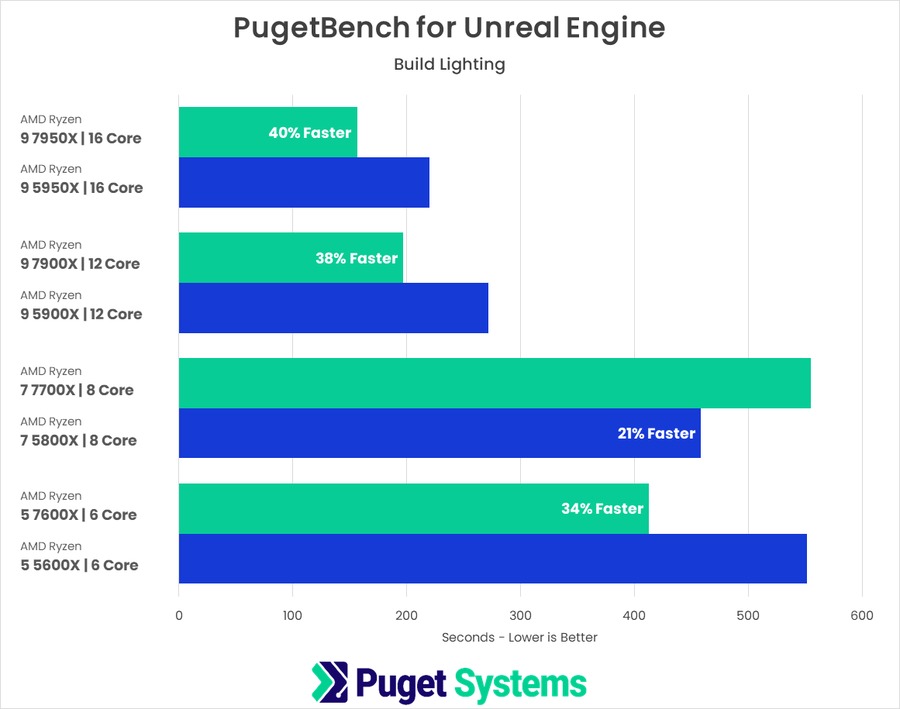 In the previous section, we examined how the new Ryzen 7000 series stacks up against Intel’s current CPUs, but we should also examine how they compare to the previous generation Ryzen 5000 series. The core counts have not changed, so the increases we are seeing are due to the increase in IPC, clock speeds, DDR5, and other core changes.

As we can see from the chart, there is a 35-39% improvement on most of the new CPUs. The one exception is the 7700X. As noted above, there was one specific test that this CPU struggled with, CPU light baking. Other than that one instance, across all tests and all CPUs, there is a pretty consistent 30% uplift or more. The 7950X even managed to be 47% faster at compiling shaders, the task that every Unreal Engine user must face. This is a fantastic improvement over one generation. AMD already presented a great option on the higher end of these CPUs, and that just got even better.

How well do the AMD Ryzen 7000 Series CPUs perform in Unreal Engine?

AMD’s new Ryzen 7000 series CPUs show great improvements in Unreal Engine performance. AMD’s Ryzen 5000 series already had a lead in rendering performance over Intel, and this furthered that. On the top end, the Ryzen 7950X averages 53% faster than Intel’s 12900KS in all of our tests. The Ryzen 7900X managed to outperform the similarly priced 12900K by 29%. On the top end of this class of CPU, AMD furthered its lead.

On the lower end, Intel manages pulls out some wins, even though the gap is much smaller. The Ryzen 7700X faltered in the light baking test, but in source code compile it was only 3% faster, and shader compile the 12700K was 6% faster. Even if the 7700X hadn’t struggled in light baking, the 12700K probably would have essentially tied. The 7600X is in a virtual dead heat with the 12600K, each winning and losing different tests by small margins.

However, it is worth pointing out that Intel is expected to launch their new Core 13th Gen processors sometime later this year, with some sites like Tom's Hardware speculating that they could launch as early as October. We won't know how those upcoming Intel processors will perform until they are released, but given the short timeframe we are likely dealing with, it may be worth holding off on purchasing a Ryzen 7000 (or an Intel Core 12th Gen) processor for a little bit if you can. While AMD has a firm lead when it comes to Unreal Engine performance on their higher end CPUs, it may be worth waiting to see if Intel is able to pull off comeback with their 13th gen processors.

Keep in mind that the benchmark results in this article are strictly for Unreal Engine and that performance will vary widely in different applications. If your workflow includes other software packages, we highly recommend checking out our AMD Ryzen 7000 Series Processors Content Creation Review article which includes results and links to in-depth testing for a range of other applications including Premiere Pro, After Effects, Lightroom Classic, DaVinci Resolve, and Blender.