TL;DR: Should you use the AMD Ryzen 7 5800X3D for Content Creation?

AMD has been very clear that the new Ryzen 5800X3D is intended first and foremost for gaming, with the type of content creation applications we tested not even being as much as a footnote on their product page. However, content creation is an area that has been growing massively in the last few years, with a significant subset of gamers also using their computer for video editing, photography, or game design. Because of this, we feel that it is important to look at these kinds of workflows - even if they are a secondary concern.

Overall, the Ryzen 5800X3D is a great proof of concept product for using 3D V-Cache on desktop CPUs, but we would recommend following AMD's advertising of the product, and using it primarily for gaming. For content creation, it can be on par with the standard 5800X in many cases, but in others, you could encounter a decent drop in performance depending on the application you are using. 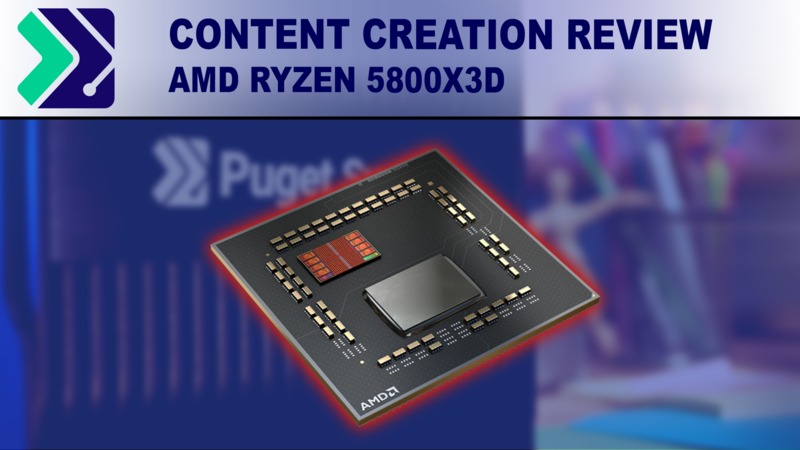 Both AMD and Intel are constantly on the hunt for new ways to give them an edge over their competition, and often go much deeper than the typical "cores and frequency" race we have all come to know and love. With the Ryzen 5800X3D, AMD is bringing new technology to their desktop process line in the form of 3D V-Cache.

Now, exactly what 3D V-Cache is and how it works is beyond the scope of this article, but if you are interested in the details, AMD has a number of resources on their AMD 3D V-Cache™ Technology page that you can check out. According to AMD, however, the end result is that 3D V-Cache allows them to "create the world’s fastest gaming desktop processor". It is worth making a special note of that word: "gaming".

If that is the case and gaming is the focus of the 5800X3D, why are we doing a full article looking at how the 5800X3D performs for content creation, and not including any gaming benchmarks? The crux of it is that the gaming side has already been well covered by a host of hardware reviewers, and we feel no need to replicate their terrific work. However, we do believe that it is often just as useful to know how a product performs outside of its intended role since many people use their PCs for a wide range of tasks, including content creation.

If the 5800X3D ends up also being faster for content creation, even if that is not its main goal, that is terrific information to have! Conversely, if it ends up being a bit slower than the 5800X for content creation, that is also very useful information. Knowing both the pros and the cons of a specific CPU is crucial when deciding which CPU (or any other hardware for that matter) you should use.

For the tests themselves, we will be using many of our PugetBench series of benchmarks using the latest versions of the host applications. Most of these benchmarks include the ability to upload the results to our online database, so if you want to know how your own system compares, you can download and run the benchmark yourself. In addition, we will also be testing with a number of CPU-based rendering engines as well as our in-development Unreal Engine benchmark. 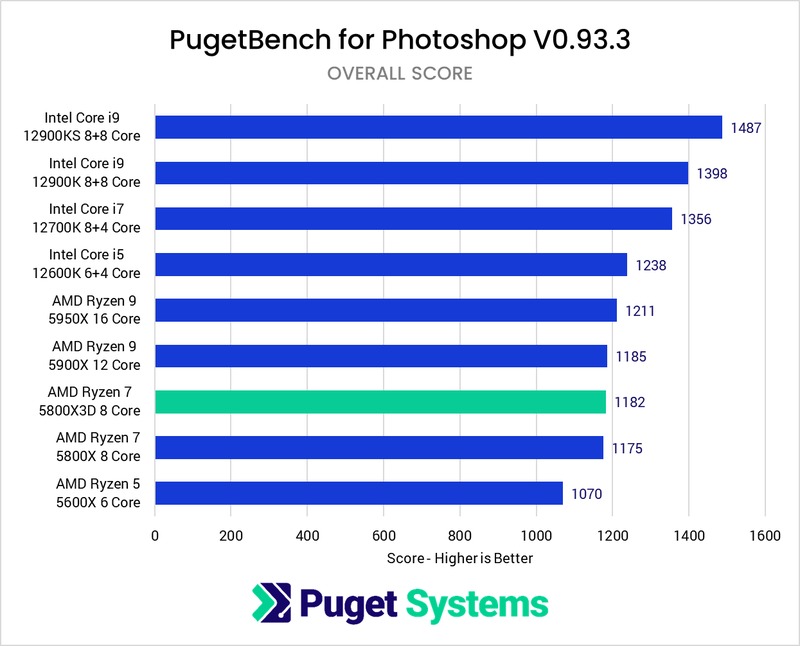 Starting off with Photoshop, we get our first peek at how the 5800X3D fares in lightly threaded applications. In some ways, Photoshop is similar to gaming as it doesn't often take advantage of a significant number of CPU cores, but since the ways in which it uses cache are quite a bit different, it is hard to guess how it will perform.

In the end, the 5800X3D ended up performing within 1% of the 5800X. And in fact, it is worth noting that the 5800X, 5800X3D, 5900X, and 5950X all scored within a few percent of each other, making them effectively the same in terms of performance. So, while the 5800X3D isn't any faster than the 5800X in Photoshop, you also aren't looking at any sort of performance drop due to the slightly lower clock speeds. 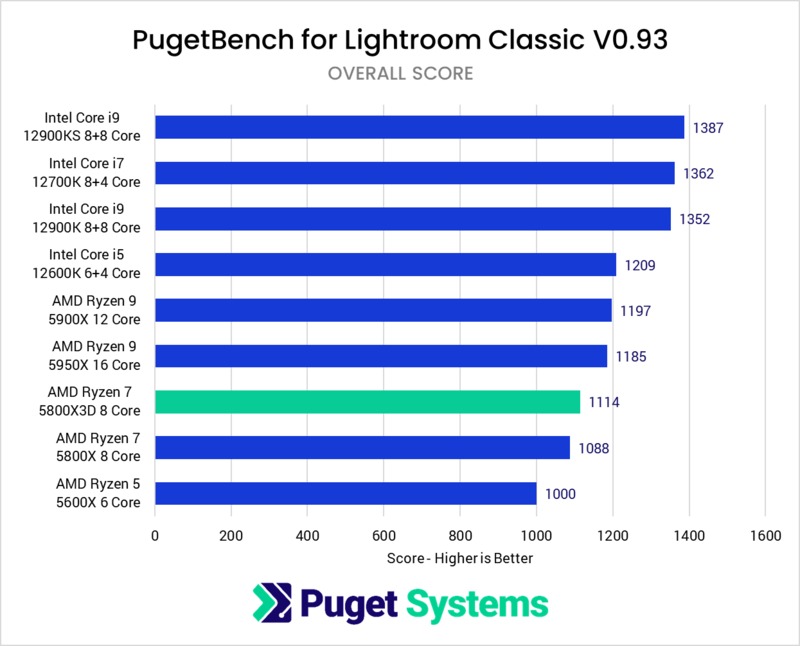 For Lightroom Classic, the Ryzen 5800X3D gets a bit of a boost, but it is not by a significant amount. Compared to the 5800X, it is a whole 2.4% faster, which is well within the ~5% margin of error for this kind of real-world test.

In other words, just like with Photoshop, the 5800X3D doesn't give much of a performance benefit in Lightroom Classic, but it also doesn't see any sort of drop in performance compared to the "standard" 5800X. 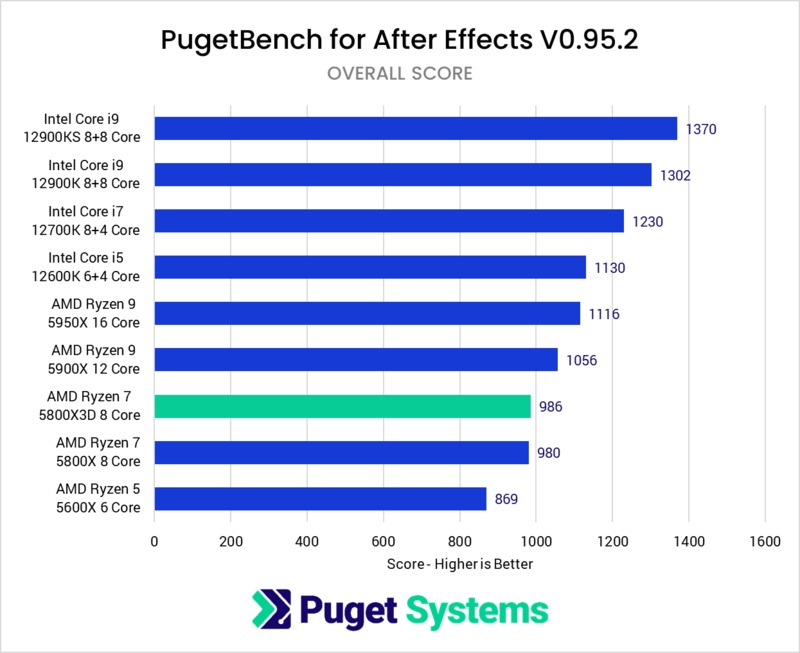 Moving on to After Effects, we expected the 3D Cache to make a bigger impact here than for Photoshop and Lightroom Classic. But, this just shows how hard it is to estimate these kinds of things, as the Ryzen 5800X3D scored within a percent of the 5800X.

So really, just more of the same here with the Ryzen 5800X3D scoring effectively identically to the 5800X. 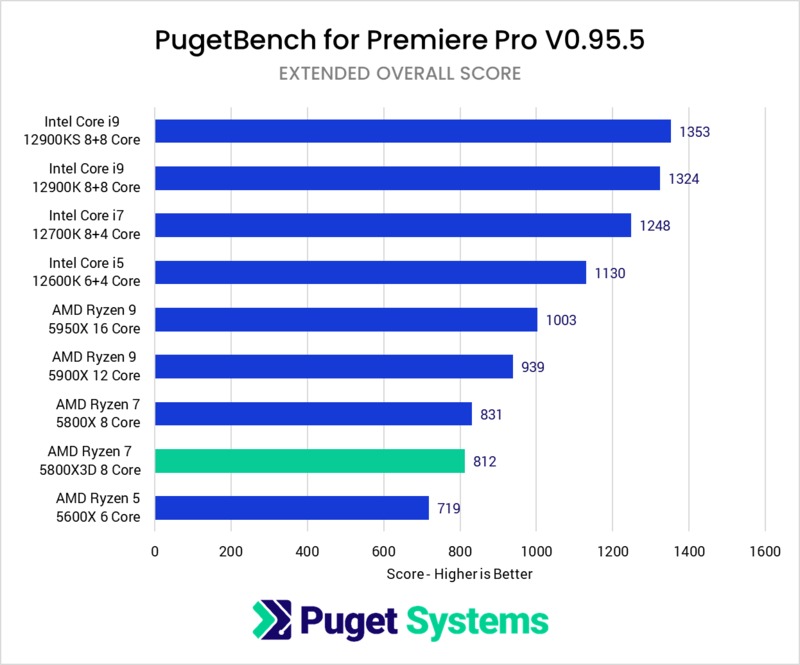 In Adobe Premiere Pro, we get the first instance where the Ryzen 5800X3D scored below the 5800X. The difference is only about 2.4%, however, which as we mentioned earlier, is well within the margin of error for these types of tests. 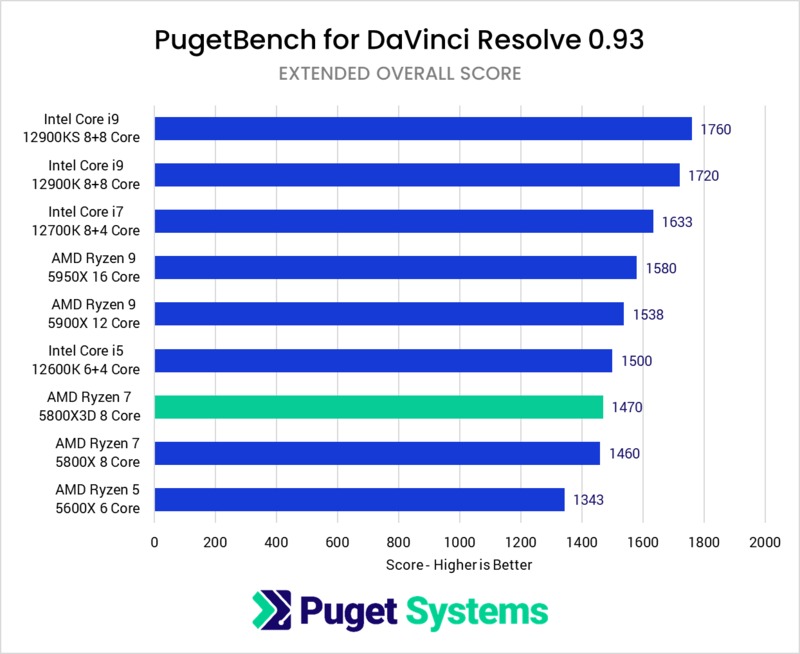 Things are starting to sound like a broken record at this point (we promise we have a few more interesting results to come!), but for DaVinci Resolve Studio, the performance between the Ryzen 5800X3D and the 5800X is once again within a percent of each other. 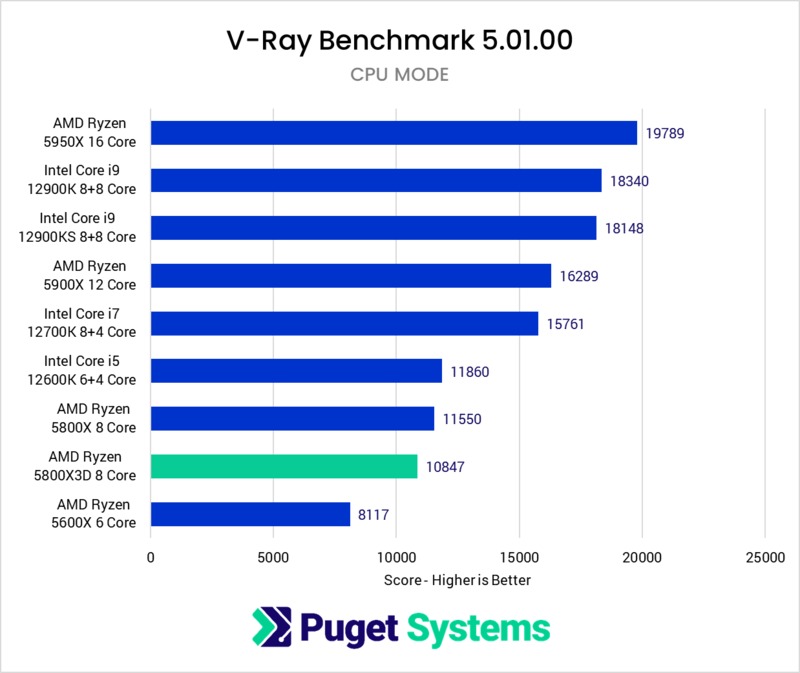 The AMD Ryzen and Intel Core lines are not the class of CPU best suited for CPU rendering, but there are plenty of users that may prefer a consumer class CPU due to other aspects of their workflow. For those users, we decided to go ahead and include V-Ray (And Cinema 4D) to show what sort of performance they could expect.

Interestingly enough, in V-Ray we see a 7% decrease in performance compared to the Ryzen 5800X. In other words, the decrease in clock speed is having a much bigger impact than any gains the larger 3D cache may provide.

Just as we saw with V-Ray, CineBench also shows a 7% decrease in performance, both in multi-core and single-core performance. Slower clock speeds are not a good thing for 3D workflows.

Rounding out our testing is Unreal Engine, which showed an extremely mixed bag of results.

Starting off with code compile in Visual Studio, the Ryzen 5800X3D saw a 5% uplift in performance compared to the 5800X. This is a task with lots of data flowing in and out of the CPU, and the larger/faster cache is able to overcome the slower clock speeds. Even more impressive is shader compile, which was a huge 18% faster with the 5800X3D. This isn't quite enough to catch up with the 5900X, but shows how important the cache is for tasks like this. Hopefully, we can see more of this with future AMD CPUs.

Unfortunately, light baking did not fare well at all on this new CPU, with the 5800X3D coming in at a massive 43% slower than the 5800X. This was after several attempts, including restarting Unreal, rebooting the system, and completely reinstalling the project. Each time, the progress bar would get to 99%, then hold there for several minutes while all CPU cores remained at 100% before finishing. This is most likely a bug - either with Unreal, Windows, or the BIOS. It is a little worrisome that similar performance hits may happen with other software packages.

Either way, all we can test is what the performance is today, which means that the 5800X3D is anywhere from 18% faster, to 43% slower than the Ryzen 5800X for Unreal Engine.

It is worth noting that AMD has made no claims whatsoever that the new Ryzen 5800X3D is designed for the type of content creation applications we tested in this article. From what we have seen, gaming is the #1 focus for this product, so in many ways, we are shoehorning it into workflows that AMD does not intend for it to be used in. It is like someone reviewing a pair of running shoes but only looking at them in terms of how well they pair with a formal tuxedo.

Still, content creation is an area that has been growing massively in the last few years, with a significant subset of gamers also using their computer for video editing, photography, or game design. Because of this, we feel that it is important to look at these kinds of workflows - even if they are a secondary concern. 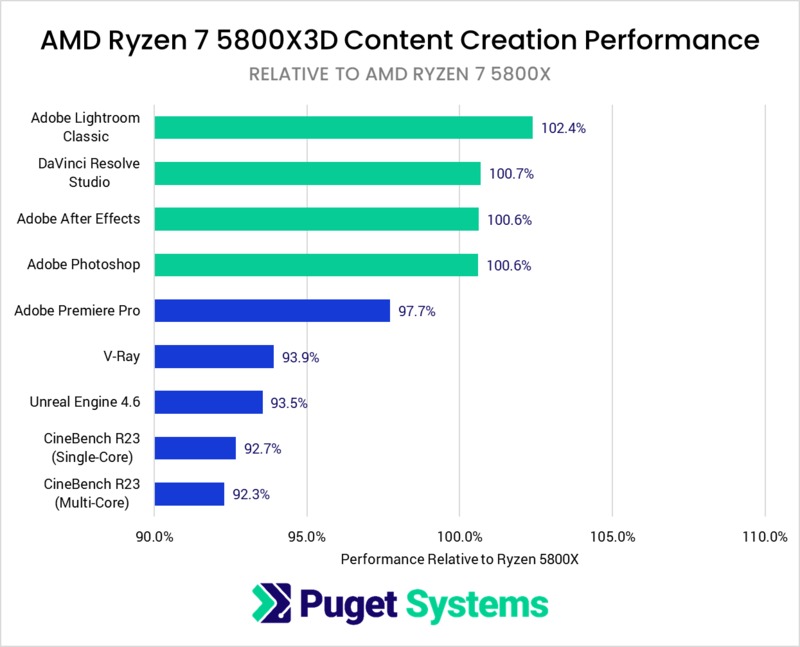 To sum up our testing, the AMD Ryzen 5800X3D is at best on par with the Ryzen 5800X, and at worse, significantly slower. In other words, if performance for content creation applications is a big deal to you, we would recommend sticking with the Ryzen 5800X - or, in some cases, the Intel Core i5 12600K.

For the video and photo applications we tested (Photoshop, Lightroom Classic, After Effects, Premiere Pro, and DaVinci Resolve Studio), the 5800X3D performed within a few percent of the 5800X. The lower clock speed certainly doesn't help in these kinds of applications, but the faster and larger 3D V-Cache was beneficial enough to largely make up the difference. It wasn't, however, enough for the 5800X3D to ever be more than a percent or two faster than the 5800X.

CPU Rendering (V-Ray and CineBench) is in many ways a worst-case situation for the 5800X3D. L3 Cache doesn't come into play much for these types of workflows, and the 5-12% lower clock speeds end up resulting in 6-8% lower performance compared to the Ryzen 5800X.

Unreal Engine is also an area where the 5800X3D struggles, but it is also the one application where it shows significant performance gains over the 5800X. It averages out to being ~6% slower than the 5800X, but that is largely due to the fact that it was a massive 43% slower than the 5800X when baking lighting. For code and shader compile, the 5800X3D was actually 5% and 18% faster than the 5800X respectively. Most likely, the issue with baking lighting is due to some sort of bug, so it is possible the 3D V-Cache in general will be able to give a nice performance boost for those working in Unreal Engine once this bug is worked out.

Overall, the Ryzen 5800X3D is a great proof of concept product for using 3D V-Cache on desktop CPUs, but we would recommend following AMD's advertising of the product, and using it primarily for gaming. For content creation, it can be on par with the standard 5800X in many cases, but in others, you could encounter a decent drop in performance depending on the application you are using

While the 5800X3D and 5800X are generally a bit below what we recommend for our content creation workstations, if you are in the market for a new desktop for any of these applications, be sure to check out our Content Creation Workstations. Our systems are tailored specifically for these types of workflows, and feel free to contact one of our technology consultants for help configuring a workstation that meets the specific needs of your unique workflow.