64 cores! The latest AMD Threadripper is out, the 3990x 64-core. I've spent the last couple of days running benchmarks and have some results showing raw numerical compute performance using my standard CPU testing applications HPL Linpack and the molecular dynamics program NAMD. The 3990x is a great processor, however, there were difficulties and some disappointments during the testing.

It is nice having AMD making exceptionally great processors again. This 64-core Threadripper 3990x is the pinnacle of the "consumer" Zen2 core processors. (EPYC Rome is the server line based on Zen2 core)

THESE RESULTS ARE PRELIMINARY!

Version 2.0 of the AMD "BLIS" library was used which gives very good performance with Linpack. I did have some scaling anomalies with the 3990x that I have not resolved yet (but still achieved very good results).

This post revisits the recent Ryzen and Threadripper posts and adds in new results for the Threadripper 3990x I'm including NAMD Molecular Dynamics results for my usual test molecule, STMV as well as a smaller molecular system, ApoA1. ApoA1 seems to be a popular system for benchmarking on CPU with NAMD. GPU acceleration results are reported for the STMV and ApoA1 job runs.

I'll start with some of the problems I encountered during the testing that prompted me to remark that these "results are preliminary". This should temper the results that follow. There is room for improvement!

I expect this to be a better platform using the finial release of Ubuntu 20.04 in April.

NAMD performance was very good but I can't help but think results could be better based on what I saw with Linpack.

(see the posts linked in the Introduction for older test configurations)

The AMD Threadripper 3990x results are not as high as expected and can likely be improved. 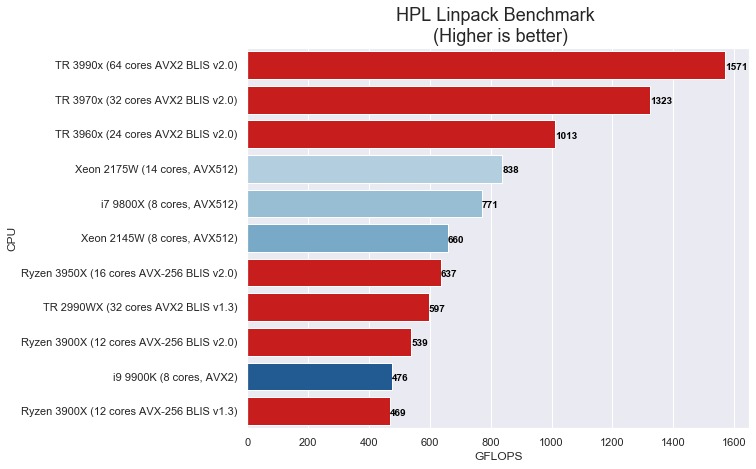 The TR3990x results are impressive for a processors with AVX2 (rather than AVX512) but I expect that these results could be better. (see "issues" section) I will repeat this testing after Ubuntu 20.04 is released.

NAMD is one of my favorite programs to use for benchmarking because it has great parallel scaling across cores (and cluster nodes). It does not significantly benefit from linking with the Intel MKL library and it runs on a wide variety of hardware and OS platforms. It's also a very important Molecular Dynamics research program.

NAMD also has very good GPU acceleration. Adding CUDA capable GPU's will increase throughput significantly. However,with NAMD and other codes like it, only a portion of the heavy compute can be offloaded to GPU. A good CPU is necessary to achieved balanced performance.

This plot shows the performance of a molecular dynamics simulation on the million atom "stmv" ( satellite tobacco mosaic virus ). These job runs are with CPU and with 1 or 2 RTX Titan GPU's added. Performance is in "day/ns" (days to compute a nano second of simulation time) This is the standard output for NAMD. If you prefer ns/day then just take the reciprocal. 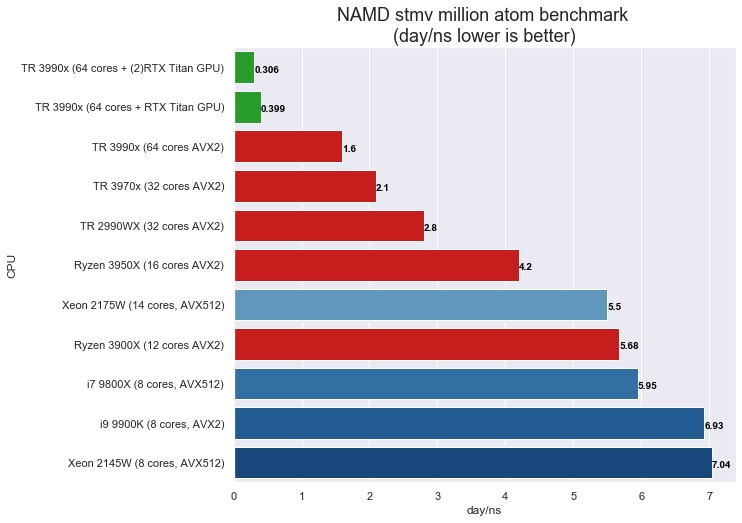 The Threadripper 3990x gave excellent performance for NAMD. Results are exceptionally good for CPU alone and with added GPU's. These are the best results I have ever obtained for these job runs.

This last set of results is using the smaller ApoA1 problem (it's still pretty big with 92000 atoms!) These results are CPU only.

*Results with added RTX Titan are 0.031 day/ns and 2 x RTX Titan 0.020 day/ns. These results are similar to those with the 3970x and 1 or 2 2080Ti GPU's. The job runs are so fast that there is little difference because of communication dominating the calculation time.

I expected the TR3990x 64-core CPU together with 2-4 high-end NVIDIA GPU's to "set the bar" for performance as a workstation platform for this class of applications. I believe this is indeed the case!