Many of the computers we sell here at Puget Systems will be used for playing games, and we also get a lot of folks wanting to run two (or more) monitors.  Sometimes those goals intersect, and in those situations I have had people ask if they needed to get a second video card so that using additional monitors will not impact their performance for gaming.  I myself use two monitors here at work, which has been a great improvement in usability, but I don't play games in the office.  Because of that I've had to fall back on anecdotal evidence when this topic comes up, and make educated guesses depending on individual scenarios. Rather than continue in that approach, though, I wanted to get hard numbers to support my advice.

To this end I borrowed our nVidia 3D Vision demo system, hooked up a second monitor to it, and ran some tests.  To simulate a game being played I ran the Unigine Heaven benchmark, and did so under several different circumstances:


Those situations range from the most basic up to the most demanding uses of a second monitor I could think of, with the last being really more of a hypothetical situation than anything else; it would be quite difficult to play two different games at once!  Here are the results that I found: 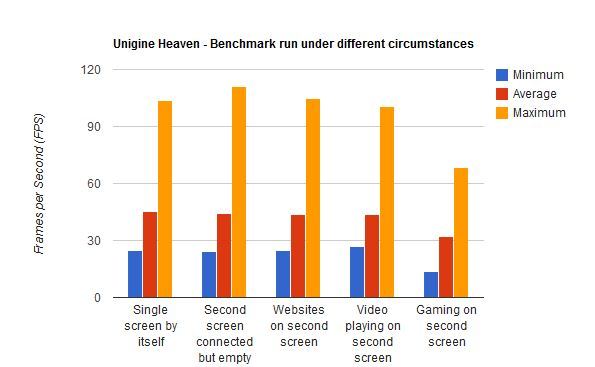 This plainly shows that adding a second monitor – even if you are doing fairly standard sorts of work on it – has almost no impact on performance of a game.  Going so far as to run a second game of course is a major impact, and I could tell on the game I was playing that it wasn't nearly as smooth as it would have been without the benchmark running at the same time.  Short of that, though, it looks like you can run two screens off one video card without needing to worry about losing performance in a game!

For the record, the system running these tests had a Core i7 875K processor with a GeForce GTX 570 video card.  It is possible that with a lower-end system the impact of an actively-used second monitor could be greater, but these specs are in line with or even lower than most modern gaming computers – so the advice here should apply to most folks looking for a new system.