One of the services we offer here at Puget Systems, aimed at high-end gamers and enthusiasts, is overclocking.  It is a practice that has been around for quite some time which involves pushing the processor in a computer beyond its rated clock speed.  This can provide an additional performance boost without the need to spend more money on a faster processor, though there are some trade-offs involved: additional heat and stress above and beyond what the CPU may have been designed to handle.

To ensure that we are able to deliver both sizable performance gains and reliable operation when overclocking, we only offer it on select combinations of motherboards and CPUs - and only when sufficient cooling is in place to handle the additional heat being generated.  As of the time of this writing that means Intel processors with unlocked multipliers (Core i5 and i7 chips with models ending in K or X), high-end Asus motherboards, and usually liquid cooling.

The process of overclocking itself involves tweaking settings in the BIOS and lots of testing.  During the course of our work we adjust the CPU multiplier, bus speed, and various voltages - along with some more obscure settings to ensure stability.  We test a system at various speed settings until we are able to lock in on a speed that works well for the exact set of hardware involved, and then we do an extended burn-in test to ensure stability. Once we are pleased with those results we re-run the same set of benchmark tests that we run on all computers; overclocked systems get that testing twice, then - once before the overclocking and once after.  That allows for comparison to see much real-world performance is improved by boosting the clock speed.

Because of the added time involved there we do charge a small amount to overclock - but the resulting speed increase usually far outweighs that cost. Some people do a more 'lazy' form of overclocking: they simply crank settings up to a pre-determined speed and lock the processor in at that level. That may be quick, but it can also end up missing out on higher performance available - or worse, pushing a specific set of hardware too hard, resulting in damage to the components over time.

One of the more novel things we do when overclocking here at Puget Systems is enable Intel's SpeedStep technology.  That allows the system to run at the full, overclocked speed whenever it is needed - but the CPU can also scale back on clock speed when idle.  That reduces power used, and generates less heat as well... which in turn means lower noise levels when the system isn't working hard. You can see this in action by loading up a program like CPUz: when you aren't running anything the clock speed will be low, but once a demanding application starts it will kick up to the overclocked setting. As an aside, don't look at the Computer Properties page in Windows for this info: it simply shows the stock speed the processor is designed to run at, no matter what the current clock speed is. 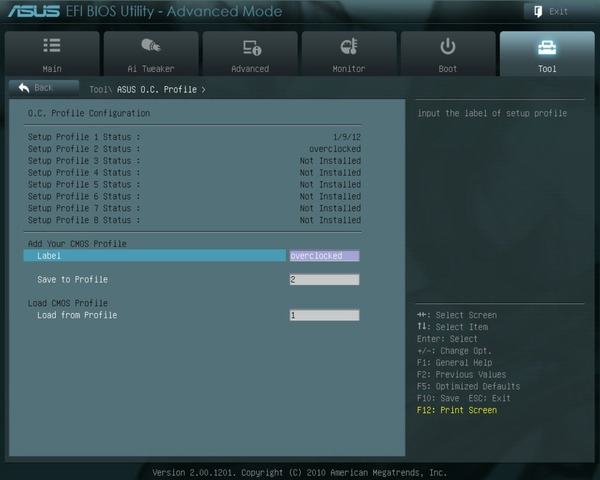 We also save both overclocked and stock-speed BIOS settings, using Asus' OC Profiles feature.  That way our customers can easily reset the overclocking if they accidentally change a setting in the BIOS, or switch to normal speed settings if need be.  We even take screen-shots of the BIOS settings as they are when the computer ships out, creating an easy visual reference for both our customers and our tech support department.

Now with that said, I would not recommend overclocking on systems where reliability and longevity are critical. Servers, mission-critical workstations, and situations where the work being done would be time consuming or impossible to reproduce will not benefit enough from a little extra speed to offset the risks. We have seen overclocking sometimes impact the accuracy of sensitive calculations, for example, and it can also lead to earlier hardware failure than components would see with standard speeds and temperatures. This is really more for the enthusiast crowd than professionals.

If you are interested in getting an overclocked system, check out our Deluge line of performance computers.  We can also offer overclocking on more customized systems, as long as the combination of hardware is approved by our production team. Please feel free to call or email our sales consultants for more info, or to set up a quote!