Looking for information on newer chipsets? We have multiple articles you may be interested in:

Intel is nearing the release of their third-generation Core Processor platform, and in preparation they have launched several new motherboard chipsets this week.  For desktops, there are four variants: Z77, Z75, H77, and B75 - with a couple more coming later in the year.

All of these share the same core functionality, and for our customers here at Puget Systems the more value-oriented Z75 and B75 options aren't really worthwhile. However, I think a brief overview of the differences between Z77 and H77, with a comparison to the preceding Z68 chipset, merits a look.  In fact, lets start with Z68.

This chipset represents the pinnacle of Intel's second-generation, mainstream Core processor platform (also known as Sandy Bridge).  It combined the key features of the earlier P67 and H67 chipsets, as we have previously discussed.  It supports splitting the main PCI-Express x16 connection into two x8 slots, allowing SLI or Crossfire functionality for improved gaming.  It also allows for overclocking of select processors, and was the first Intel chipset to add Smart Response Technology - Intel's fancy name for SSD caching of a traditional hard drive.  Use of the onboard graphics on Intel's Sandy Bridge processors is also supported, with up to two simultaneous monitor outputs.

Newer motherboards using this chipset have even been designed to be compatible with the upcoming third-gen Core processors; the Asus P8Z68-V Pro Gen3 is one such example.  Those modified in this way claim to support PCI-Express 3.0, once equipped with a new 3rd-generation processor that supports the new standard.

This is the direct successor to Z68, with almost the exact same feature set.  It has everything Z68 does and then some.  For example, USB 3.0 has been integrated into the chipset; four USB 3.0 ports can be powered in this way, along with several of the older USB 2.0 ports.  That means an add-on controller chip is no longer required, though many motherboards will still have one so that they can sport more than four USB 3.0 ports.  SSD caching, overclocking, dual PCI-Express x8 slots, etc are all still available as well.

Another aspect of the chipset that has been improved is the support for onboard graphics.  Once the matching 3rd-generation processors are out, motherboards will be able to offer three simultaneous monitor outputs instead of just two.  Onboard graphics will also be faster, but both of those are functions of the newer processors; when paired with older Sandy Bridge CPUs, the speed will be the same as Z68 and the number of monitors supported at a time will still be two.

This is a scaled-back chipset option, suitable when overclocking and multiple video cards are not needed.  It cannot split the main PCI-Express x16 slot into two connections, though the PCI-Express 3.0 standard is still supported (with the upcoming processors).  Support for increasing the multiplier on unlocked processor models is also missing, hence the lack of overclocking support.  Aside from those two limitations, though, it is effectively the same as Z77: the same number of SATA and USB ports are there, SSD caching, onboard Intel graphics, and more.

This situation makes Z77 ideal for most users, as it gives the largest range of performance and upgrade options, but H77 is a great fit when overclocking and more than a single video card are simply not feasible.  For example, in small form factor systems like our Echo line the H77 chipset should be right at home. 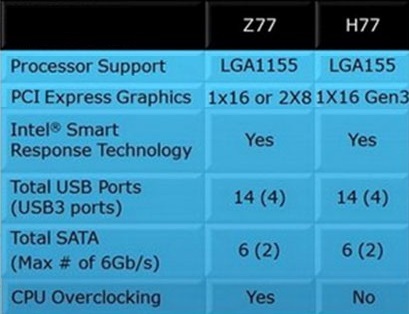 Now keep in mind that while the chipsets were released on April 8th, the actual 3rd-generation Core processors are not yet out.  Until they are also released, any system - even one ordered with the new Z77 or H77 chipsets - would simply be running a Sandy Bridge processor.  There is nothing wrong with that, as those processors offer great performers and have been running well for the last year.  The chipset-specific features like added USB 3.0 will also be functional, so in one sense this is a nice upgrade for those who would have purchased Z68 a week ago... but for the full set of new features to be operational we will have to wait and see when Intel launches the processors that these chipsets pave the way for.