There is a game in development I have been following for almost a year now, which I am extremely excited about. For anyone who was into PC gaming back in the 90s, the genius behind the Wing Commander series of games and Freelancer has returned to the game scene, to create the ‘best darn space simulator ever’: Star Citizen. It is a very ambitious project, entirely crowd-funded, with almost $44 million raised so far from its fanbase. I’ve contributed more than I would care to admit myself, alongside over 450,000 other ‘backers’.

Because this game is being crowd funded, the development team has opened up to the game’s backers – giving information out in a consistent stream, and details that would normally only be delivered to a publisher that was funding the game. We are the publisher, in a sense, and getting to be this involved in the process of making a game is fascinating and engrossing to me.

With that said, the first playable phase of the game is about to be released. What has been referred to for months as the ‘dogfighting module alpha’ now has a name: Arena Commander. It is going to be a space combat simulator, with several play modes:

– Multiplayer team battles
The latter has been described as being akin to a game like World of Tanks, but in space of course. I think it is the portion of Arena Commander that most people are looking forward to, but I am planning to spend a decent amount of time in free flight to master the controls… and then I will be using the more predictable / repeatable swarm mode to do some benchmarking.
Perhaps the coolest fact about this release, though, is that it is actually going to be a part of the final game’s persistent universe as well. It is a game within the larger game: a way you can practice and play with other folks inside the game universe, without actually risking your ‘real’ ships in combat. The developers even released a bit of in-universe fiction to explain where the game came from, as they have done with other fiction pieces detailing all sorts of aspects of the rich world they are creating. 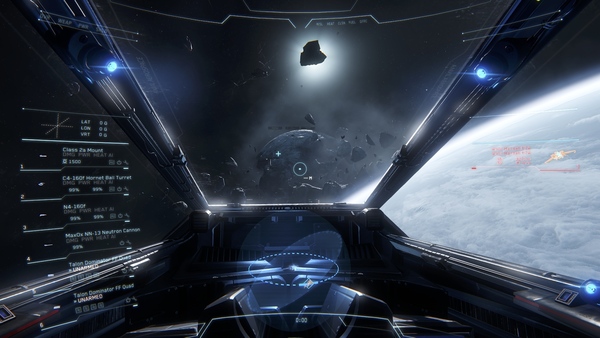 For those who want to learn more about the game, there is a wealth of info on the official Star Citizen website. The original video from the announcement in late 2012 has a good summary of the game’s vision as well, and there are dozens more videos from the course of development on their YouTube channel.

If you have ever enjoyed space-based video games, Star Wars movies, or sci-fi and gaming in general I would highly recommend checking this out! I will be doing some benchmark articles on the game's performance in the coming weeks, and likely another blog post as the game nears its full release in 2015/2016.