Our Favorite Games: World of Tanks

Welcome to the first in a short series of blog posts we will be doing here at Puget Systems. The theme of this series is our favorite games, and it will include posts about current and upcoming games which our employees are excited about. Hopefully our readers can learn about new games through these posts, and get a feel for the sort of system specs that run them well. First up: World of Tanks!

World of Tanks (or WoT, for short) is a "free to play" tank action simulator, set in the 1930s through 50s. You control a tank and its crew in 15 vs 15 player online battles, with the goal of earning experience for your crew and credits to purchase upgraded equipment and eventually additional tanks. The gameplay is a lot of fun, and does a good job of modeling realistic ballistics and armor interaction. Different tanks have varying thicknesses of armor in different sections as well as different styles of guns. This means that a given shot may or may not damage an enemy, depending on factors like the type of ammo you shoot, the caliber of the gun, the distance to your target, and the angle and amount of the target's armor. Because of those details, many real-life strategies can be brought in with good effect - though in the end it is a game, not a real-world combat simulator.

The "free to play" revenue model it uses (often shortened to "f2p") allows anyone to play the game without any up-front costs. My brother has been playing for well over a year and has never spent a dime on it. Playing this way you slowly earn three things:

- Experience (XP) on your tank, which unlocks more advanced equipment for your tank - and eventually additional tanks that are more powerful.

- XP for your crew, which improves their abilities (driving speed, turn rate, how quickly the gunner can narrow his aim, the commander's view distance, etc) - and eventually unlocks special bonuses.

- Credits, which are used to keep your tanks repaired and loaded with ammo - as well as for purchasing equipment and tanks as they are unlocked via XP.

In order to make money for the developers, though, there is also the option to purchase in-game "gold" with real money. This can be converted to credits or used to purchase premium tanks which earn credits faster and other perks.  Some of the items in-game can only be purchased this way, which has led to some complaints that the game is really "pay to win"... but I think they have found a good balance which allows casual players to enjoy the game for free while those who wish to can pay to speed up their advancement through the game. 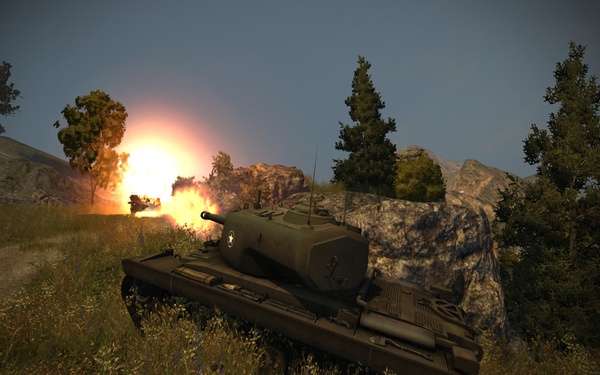 I started playing WoT early in 2011, on a dual-core AMD Athlon X2 5050e with 6GB of RAM and a GeForce GTX 460 video card. It played pretty well on that, but I recently upgraded in anticipation of another game to a Core i5 3550 and 16GB of RAM (still the same video card). That just about doubled my in-game frame rate, even with graphics settings bumped up a bit from what I used to run at. Oh, and that other game I upgraded for? It is called MechWarrior Online - and I will be posting about it in a couple of months when it reaches open beta :)

For more info on World of Tanks, check out these links: