Written on November 4, 2021 by Matt Bach
Share:
Table of Contents

While Windows 11 didn't make a big impact on performance for the new 12th Gen CPUs in most cases, when it did improve performance, it did so by a large amount. Specifically, in Photoshop we saw about a 28% improvement in performance when using Windows 11 with the Intel Core i9 12900K.

Overall, it is probably a good idea to plan on using Windows 11 for the 12th Gen Intel Core processors. Even outside of the performance you may see in individual applications, the optimizations to Thread Director should give you an overall better experience - at least, it should according to Intel.

Update 11/10/2021: On the Photoshop, Lightroom Classic, After Effects, Premiere Pro, and DaVinci Resolve results, the reported Windows 11 results for the Intel Core i9 12900K was with DDR4 RAM rather than DDR5. We have updated the charts so that both the Windows 10 and 11 results for the Core i9 12900K are both using DDR5. This fully resolves the "lower performance in Windows 11" issue we saw in some of these applications.

With the new 12th Gen Intel Core desktop processors (code-named "Alder Lake"), Intel has released their first CPUs featuring a hybrid architecture which utilizes a mix of Performance and Efficient-cores. The Performance-cores (P-cores) are what you typically would think of when it comes to a CPU core, and are designed to maximize performance for heavier workloads. The Efficient-cores (E-cores), on the other hand, are intended either for tasks that can be run in parallel, or for background tasks where higher performance isn't necessary.

This interface between the hybrid CPU cores and the operating system is something that is likely to be further developed as time goes on, but Intel has mentioned that it should be more effective on Windows 11 than it is on Windows 10. This will probably be more of a concern when you are multitasking between multiple applications, but we wanted to see if Windows 11 is able to make a significant difference in terms of raw application performance. 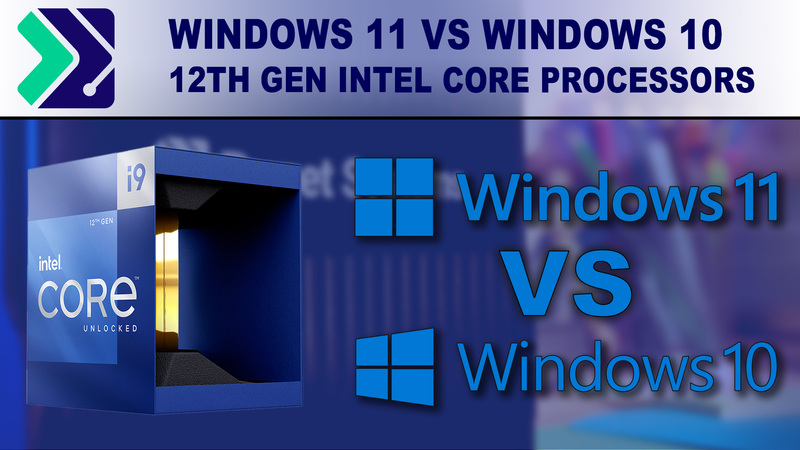 In addition to testing a 12th Gen CPU in both Windows 11 and Windows 10, we decided to also include the Core i9 11900K from the previous generation to act as a reference. Windows 11 has had some performance issues since its launch, so the i9 11900K should help us determine if any performance loss (or gain) is due to the 12th Gen's hybrid architecture, or something more fundamental.

In addition, we are also going to test the AMD Ryzen 5900X and 5950X. Again, these will be good reference results, but will also serve to show that our 12th Gen testing (which exclusively used Windows 11) is not biased towards Intel. AMD had a number of performance issues when Windows 11 first launched, but they have largely cleared up via either chipset driver or Windows updates. Including these two CPUs is partially our way of offering proof that we were not artificially gimping AMD Ryzen performance in our 12th Gen reviews.

In large part, these test platforms mirror what we used in our main 12th Gen Intel Core reviews. The only real difference is that we are testing only a sampling of CPUs, and sticking with DDR5 for the Core i9 12900K. DDR4 vs DDR5 shouldn't make an impact here, but we figured that any performance gain or loss should be more apparent when using DDR5 due to its higher performance.

For the OS testing itself, VBS was left disabled, and all chipset and Windows updates were applied that were released to fix a number of AMD performance issues on Windows 11.

To help keep this article from being a bunch of repeating text saying "there is no significant difference", we decided to group together all of the results where the performance between Windows 10 and Windows 11 was within 5%. This is what we typically consider to be the margin of error for the kind of real world we tend to focus on, and is a small enough variation that we would call the two operating systems the same.

In this category is After Effects, DaVinci Resolve Studio, CineBench R23, and V-Ray CPU. Almost all the results were actually within about 2%, with the only ones larger being in DaVinci Resolve Studio where the Ryzen 5950X was 5% slower in Windows 11, while the Core i9 12900K was 5% faster. Again, however, that is within what we consider to be the margin of error, and not large enough to be able to definitely say that there is a performance gain or loss in Windows 11. 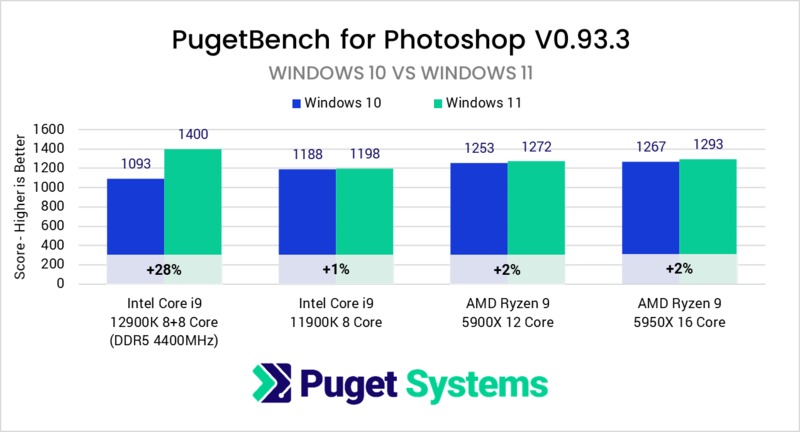 Adobe Photoshop is actually the only place where we saw a significant performance gain in Windows 11 with the new Intel Core i9 12900K. The other CPUs didn't see much of a difference, which largely rules out a software-based issue, but the 12900K was a huge 28% faster in Windows 11.

It should be noted that we repeated our tests multiple times to ensure that we did not get a single errant result. We were concerned that if there was an issue with Thread Director not always assigning the application to the right type of core that it would result in performance that varied from run to run. But, at least for Photoshop, the results were very consistent in both Windows 10 and Windows 11. 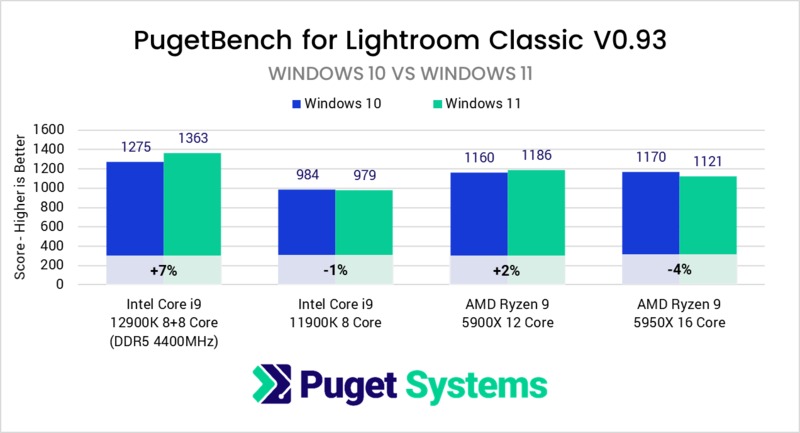 Lightroom Classic is another application where we saw an increase in performance with Windows 11 on the Core i9 12900K, although in this case it was just a 7% improvement. That isn't terribly large, but it is slightly outside of the margin of error for this type of test. 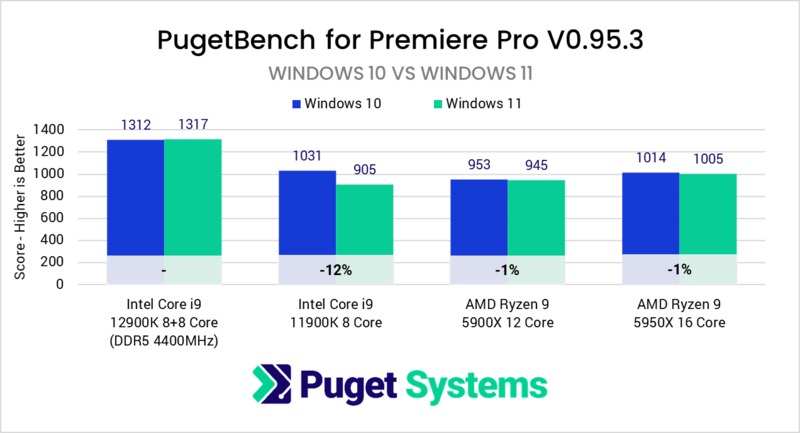 The last application we wanted to look at is Premiere Pro. We left this one for last because it is the only case where we saw a significant drop in performance with Windows 11.

Here, the new Core i9 12900K actually performed almost identically in both Windows 11 and Windows 10. The previous generation Core i9 11900K, on the other hand, saw a 12% performance drop with Windows 11. At first we thought it may be due to a driver issue with Quick Sync, but we examined the individual test results without finding any clear pattern. There are some individual tests where Windows 11 is faster, but by and large, Windows 10 was simply a bit faster across the board on that CPU.

Since it is only the 11900K that saw this behavior, it is still likely to be something specific to that CPU that is causing the lower performance in Windows 11. It could be a driver issue, or it could even be related to the motherboard's BIOS. Or, it could be something specific to the latest version of Premiere Pro - which would explain why we did not encounter similar behavior when we first tested Windows 11 for video editing.

Most likely, this is the kind of performance hiccup that will be cleared up in the near future, so we wouldn't be too concerned about it. A performance drop of course isn't ideal, but with a new OS like Windows 11, there is always going to be a few bugs to work out.

Do you need Windows 11 for 12th Gen Intel Core Processors?

In our testing, Windows 11 was largely either on par, or slightly faster than Windows 10. Funny enough, the AMD Ryzen CPUs (which has a number of performance issues when Windows 11 launched) seemed to perform perfectly in Windows 11. The two times where there was a difference only affected Intel CPUs, and Windows 11 was significantly faster in one of those.

In Premiere Pro, the previous generation Core i9 11900K ended up scoring 8% lower in Windows 11. Interestingly, this performance drop did not occur with the new Core i9 12900K, so this is likely a short-term bug either in Windows 11 or Premiere Pro that will likely get fixed in the near future.

The application that saw the biggest gain with Windows 11 was Photoshop. This is one of the most lightly threaded applications we test (at least, now that After Effects supports multi-frame rendering), so it makes since that if Thread Director accidentally assigned Photoshop to an E-core, that would make a bigger impact here than in the other applications we looked at. So, while Photoshop was the only instance where we saw a clear benefit to using Windows 11 with the Intel Core i9 12900K (on the order of 25%), it is very possible that it represents what you may encounter in other lightly threaded applications.

The fact that all by two of our tests showed performance to be within the margin of error between Windows 10 and Windows 11 is a good sign that Windows 11 is starting to get through its launch-day performance bugs. It is also good to see that while Windows 11 didn't make a big impact on performance for the new 12th Gen CPUs in most cases, when it did improve performance, it did so by a large amount.

Overall, it is probably a good idea to plan on using Windows 11 for the 12th Gen Intel Core processors. Even outside of the performance you may see in individual applications, the optimizations to Thread Director should give you an overall better experience - at least, it should according to Intel.