Skip to content
Always look at the date when you read an article. Some of the content in this article is most likely out of date, as it was written on April 19, 2018. For newer information, see our more recent articles.

AMD has just released their second generation Ryzen CPUs and while most hardware review sites focus on gaming or general system performance, today we will be looking at how they perform in Adobe After Effects CC 2018. Not only will we be comparing them to the previous generation Ryzen CPUs, but we will also see how they hold up to similarly priced Intel 8th Gen processors.

While After Effects is primarily a single or lightly threaded application, the recent integration with Cinema4D heavily favors higher core counts. Because of this, we will be segregating our testing between "standard" projects and those that utilize the Cinema 4D Renderer. 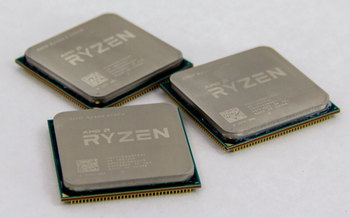 Listed below are the test platforms and CPUs we will be using in our testing:

One thing we want to point out that while our test platforms are using a single hard drive, that is not actually what we would typically recommend to our customers. A two or more drive configuration – with the cache files on a secondary drive – can make a big impact when scrubbing through complex projects. But since we will not be testing anything that would benefit from multiple drives in this article, we opted to use a single drive to cut down on the number of hardware variables. 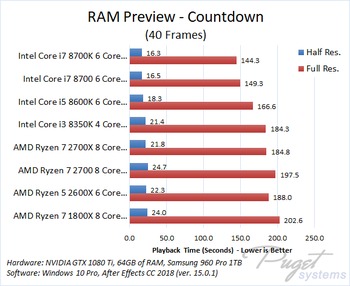 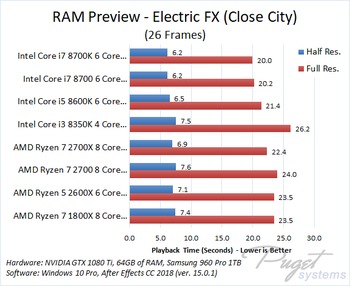 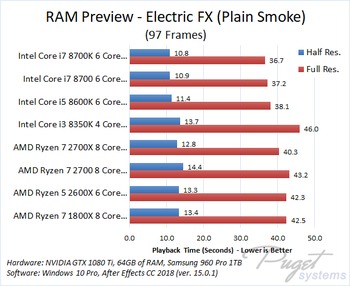 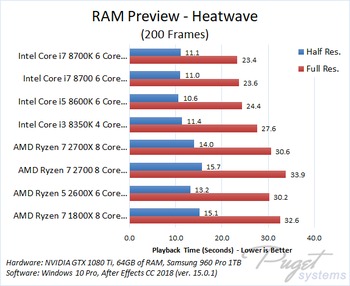 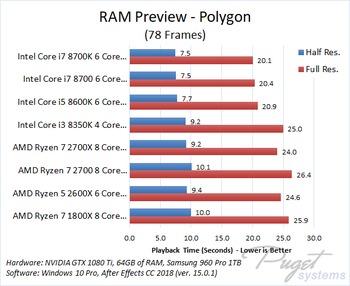 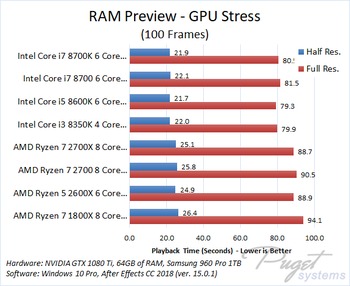 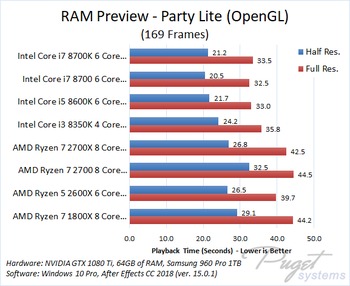 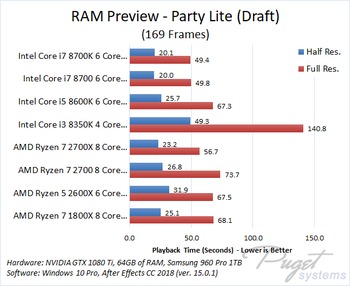 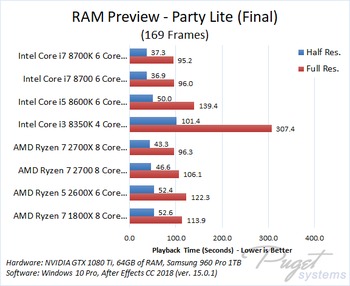 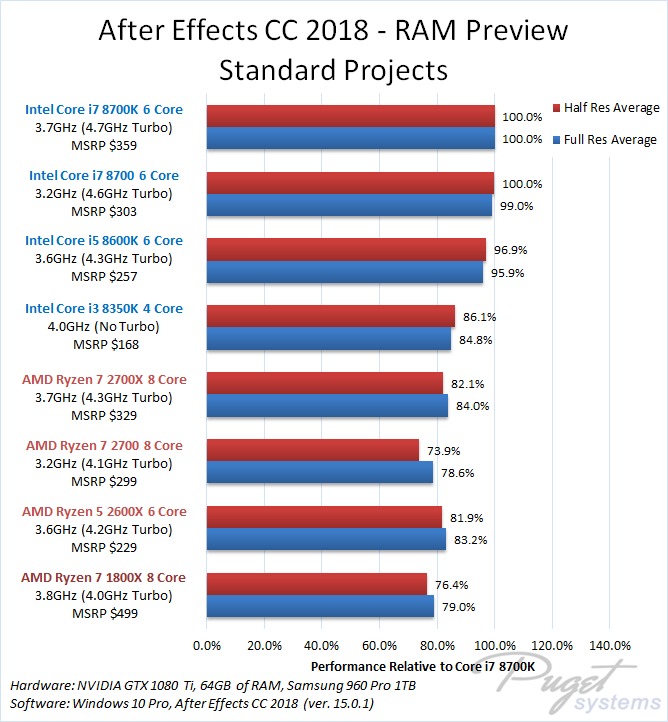 Starting with the "Standard" projects, the new Ryzen CPUs are certainly faster with the Ryzen 5 2600X performing surprisingly well. Not only is it 4-5% faster than the old Ryzen 7 1800X (at less than half the cost!) it is only a hair behind the Ryzen 7 2700X. Compared to the Intel 8th Gen CPUs, however, the Ryzen CPUs simply can't keep up for this type of work. Even the inexpensive Core i3 8350K was faster than any of the new Ryzen CPUs. 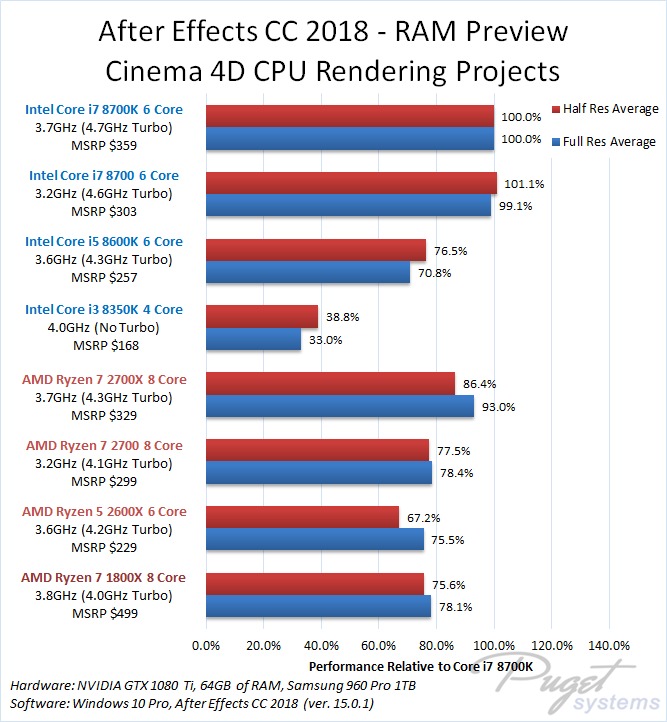 The AMD Ryzen CPUs do much better if you utilize the C4D Renderer, but even for this the Intel CPUs still have a clear edge. You could make an argument for the AMD Ryzen 7 2700 since it is slightly faster and more expensive than the Intel Core i5 8600K, but the Ryzen 7 2700 was also the worst CPU we tested for standard projects. So unless waiting on C4D renders to complete is the only thing you care about, the Core i5 8600K is probably the better choice at that price point. 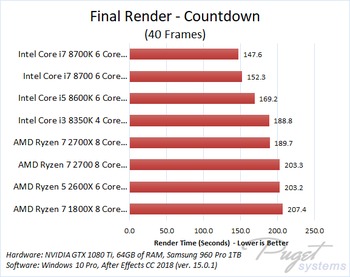 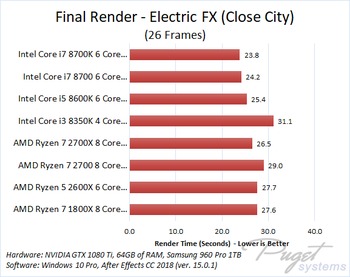 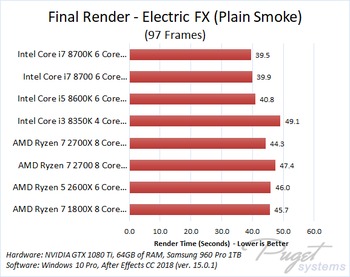 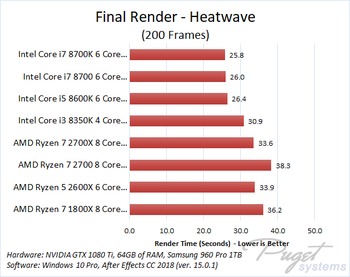 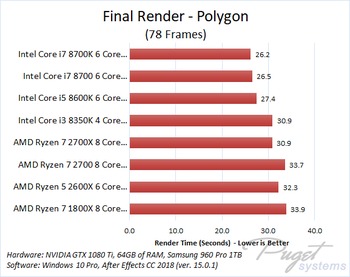 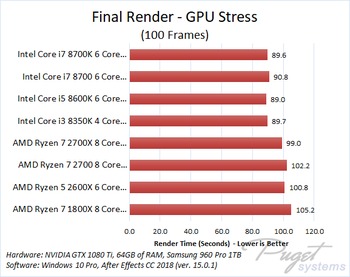 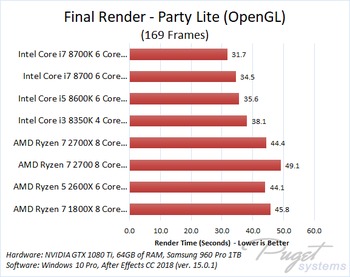 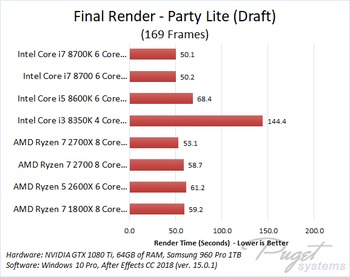 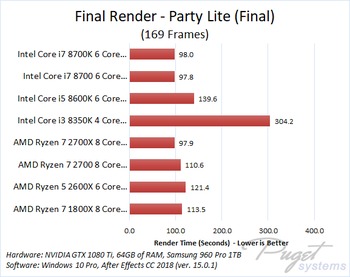 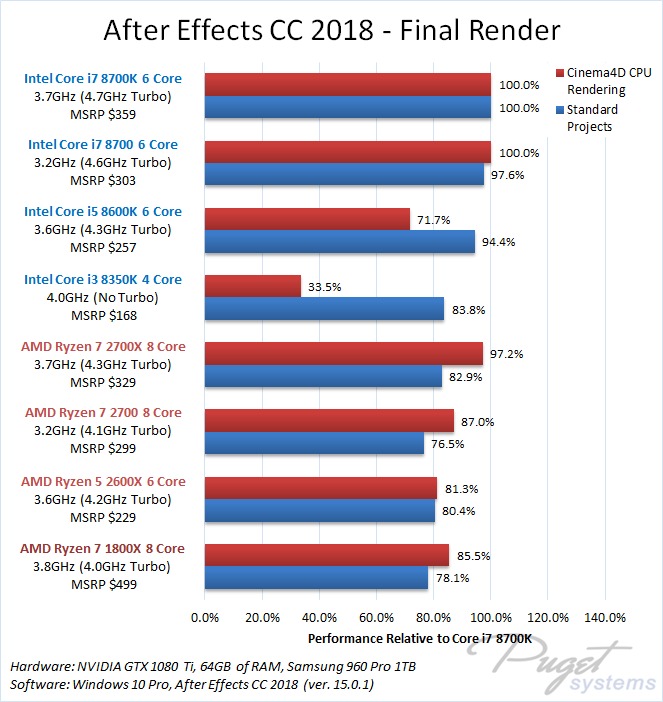 For Final Render performance, we once again decided to separate the "standard" projects and those using the Cinema4D CPU Renderer since whether or not you use that feature dramatically changes performance.

Starting with the standard projects, the relative performance between each CPU is pretty much identical to what we saw in the RAM Preview testing. This makes sense as rendering each frame into RAM is really not all that much different than rendering each from to the hard drive even if there is the addition step of encoding it to a .AVI video file. Overall for this type of project, the Intel 8th Gen CPUs are simply faster than their AMD Ryzen counterparts.

When using the Cinema4D Renderer, the AMD Ryzen CPUs did much better, but only the Ryzen 5 2600X was strictly faster than the similarly priced Intel option. For the Ryzen 7 2700 and 2700X, the Intel Core i7 8700 is faster at a similar or lower price point.

While the new second generation AMD Ryzen CPUs are certainly faster than the old Ryzen CPUs, they still can't quite keep up with their Intel counterparts in After Effects. The Ryzen 5 2600X gets pretty close, but spending a bit more on the Intel Core i5 8600K will get you a much better CPU overall and is likely well worth the small price increase. At the top end, the AMD Ryzen 7 2700 and 2700X are strictly slower than the Intel Core i7 8700 or 8700K.

What this means is that for now, the Intel 8th Gen CPUs like the Core i7 8700K are still our go-to recommendation for those looking for the best general After Effects performance. 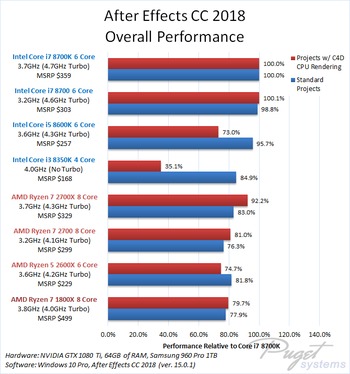