Skip to content
Always look at the date when you read an article. Some of the content in this article is most likely out of date, as it was written on November 17, 2020. For newer information, see our more recent articles.

Recently, Apple announced that it would be transitioning a number of their products from Intel processors to their own chips based on the ARM instruction set. This is very interesting for a number of reasons, but we (and many others) are interested first and foremost in what this will mean for performance.

Here at Puget Systems, we don't sell or even look at laptops all that often, but this is a big enough change that we are interested in doing some quick analysis ourselves. We are not set up for examining things like battery life, keyboard/screen quality, etc., however, so we are going to leave laptop vs laptop comparisons to other reviewers that are better equipped for those comparisons. What we will instead do is see how the new 13-inch MacBook Air and MacBook Pro compare to a number of PC desktop configurations to evaluate how the performance is relative to a desktop. 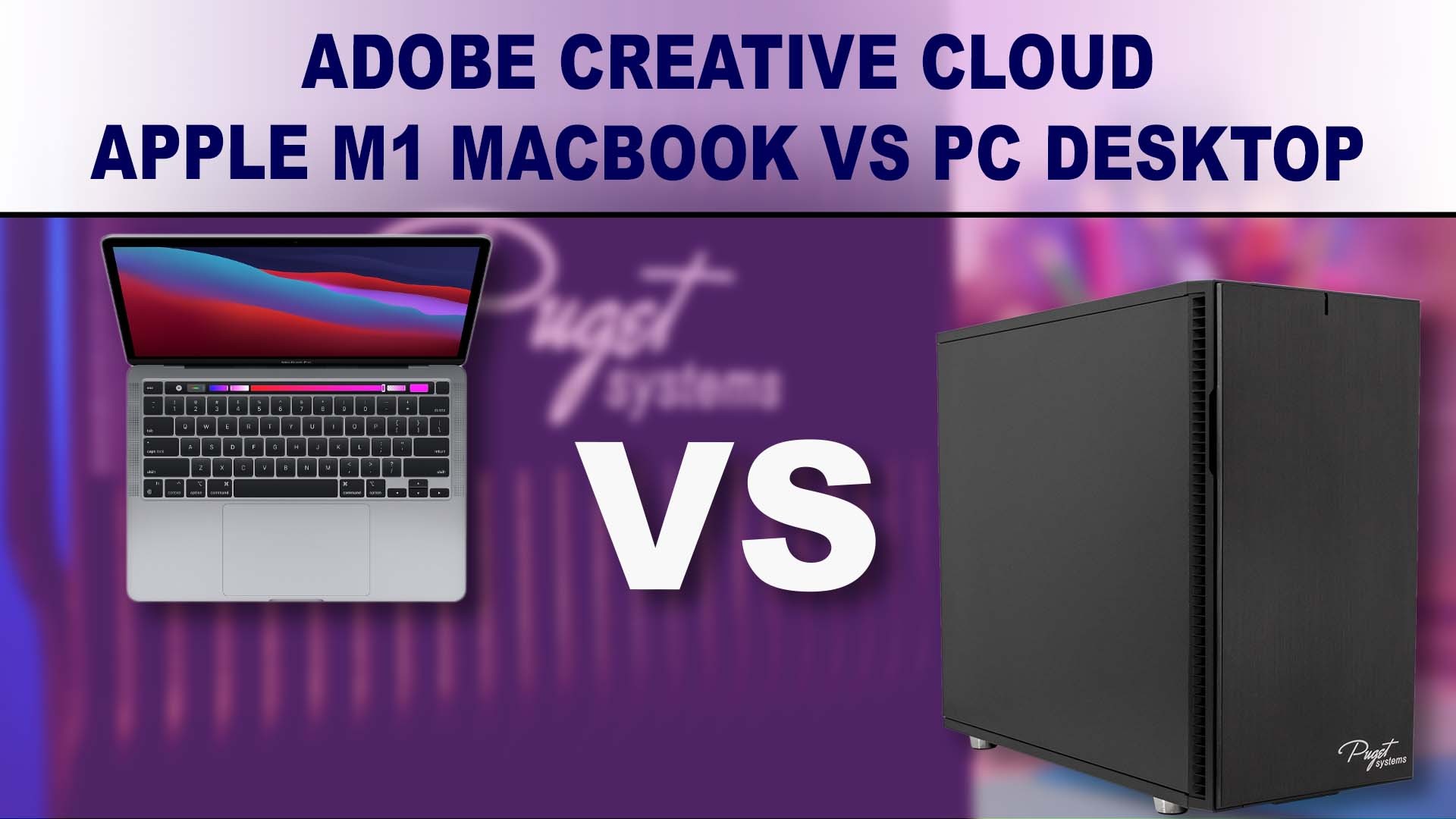 One thing to note is that we do not have pre-launch samples of the new Apple M1 MacBook Air or MacBook Pro, so these tests were not performed by Puget Systems. But, there have already been a number of results uploaded to our public benchmark database that we can use instead which removes the need for us to get in these laptops for direct testing (although we do have a MacBook Air coming in for benchmark development)

Listed below are the specifications of the systems we will be using for our analysis:

Obviously, this is not going to be a comparison based on similarly-priced configurations. Here at Puget Systems, we tend to start at mid-range options and go up from there, so we do not have anything at the sub-$2,000 price point to use. In addition, we have not moved all our internal testing over to the new Adobe application versions, so we are limited to the results in our public benchmark database that matches the benchmark/application versions used by whoever uploaded the MacBook results.

However, one thing we will also do is to provide the specs for a system that scored roughly the same as the new MacBooks. Our goal isn't to show that a PC or desktop is going to be faster than a MacBook (desktops will always be faster than a laptop), but rather to help provide context for how fast these new ARM-based MacBooks are with the current software that is available from Adobe compared to our current and past workstations. 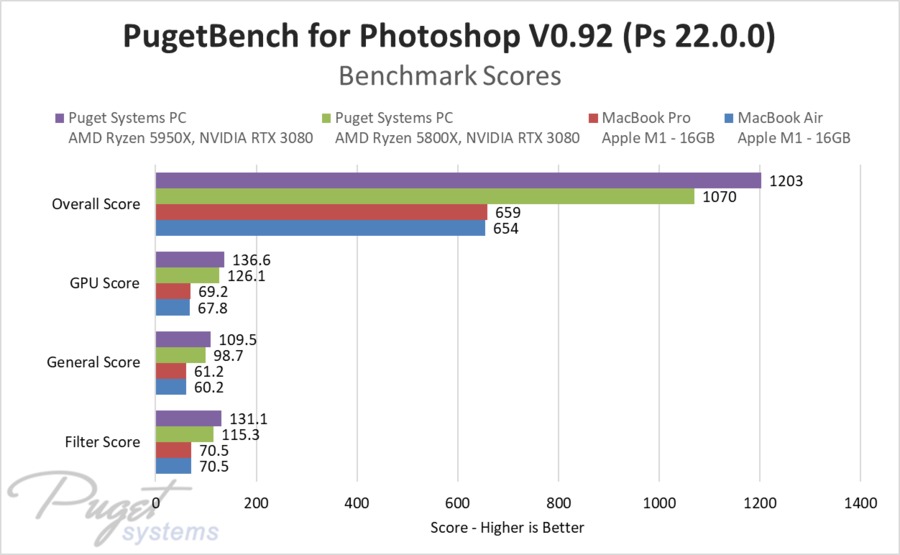 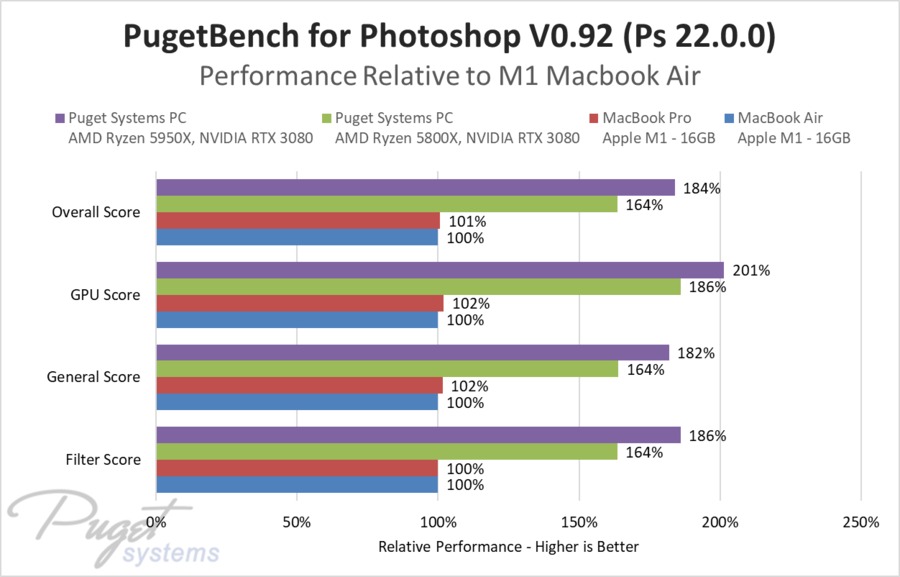 Starting off with our PugetBench for Photoshop benchmark, our two desktop configurations are certainly faster (almost 2x faster in most cases), but for a mobile platform that is roughly half the cost, the new MacBooks hold up pretty well.

As for a desktop configuration that is roughly the same performance as these MacBooks, we found a couple that performed roughly in the same ballpark:

These systems are both fairly old now, with the Intel Core i7 6700K having launched back in 2015. In other words, it would be reasonable to expect that these Apple M1 MacBooks perform about on par with a decently configured desktop PC that is around 4-5 years old. 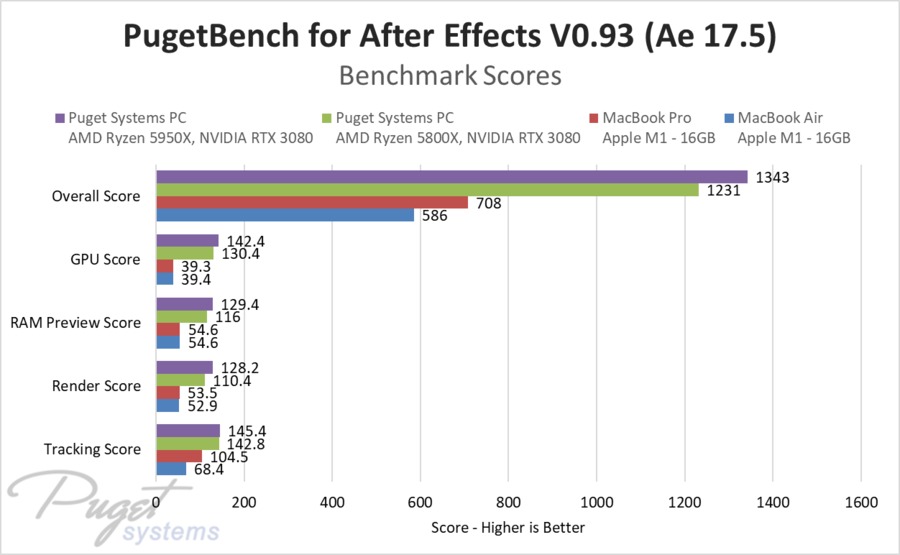 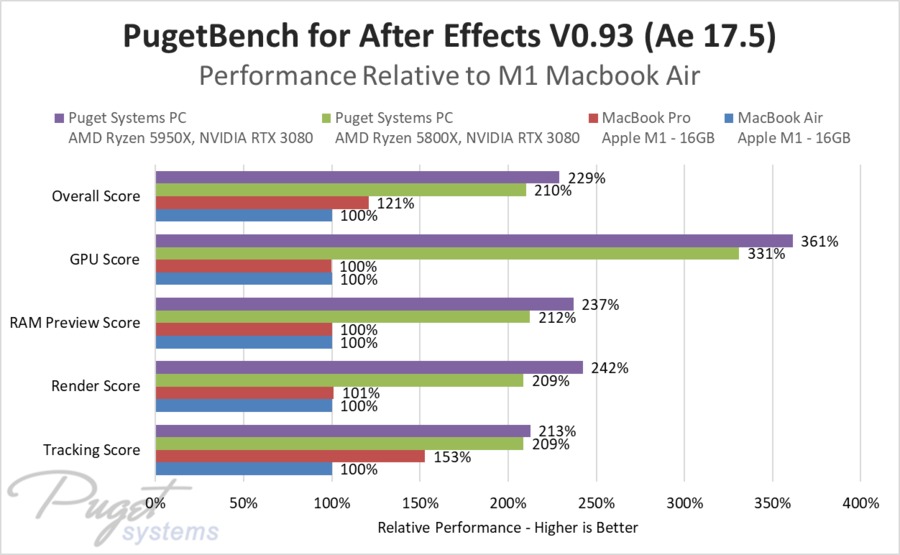 Next up is the PugetBench for After Effects benchmark. Here, the desktop configurations take a larger lead, coming in at 2.1-2.3x the performance of the MacBook Air in particular. In addition to the higher performance from the Ryzen CPUs, the fact that the desktops have a discrete GPU also makes a big difference. In fact, the "GPU Score" is around 3.5x higher on the desktops which, considering GPU acceleration is becoming more and more widely used, is a very significant factor.

As for a desktop configuration that is roughly the same performance as these MacBooks, here are two that performed roughly in the same ballpark:

Once again, these systems are both fairly old now, with the Intel Core i7 6600K having launched back in 2015. The AMD system is a bit newer (~2017), but at that time Intel had a strong lead in applications like After Effects, so most Ae users would likely be using an Intel platform. That means that the new Apple M1 MacBooks again perform about on par with a decently configured desktop PC that is around 4-5 years old. 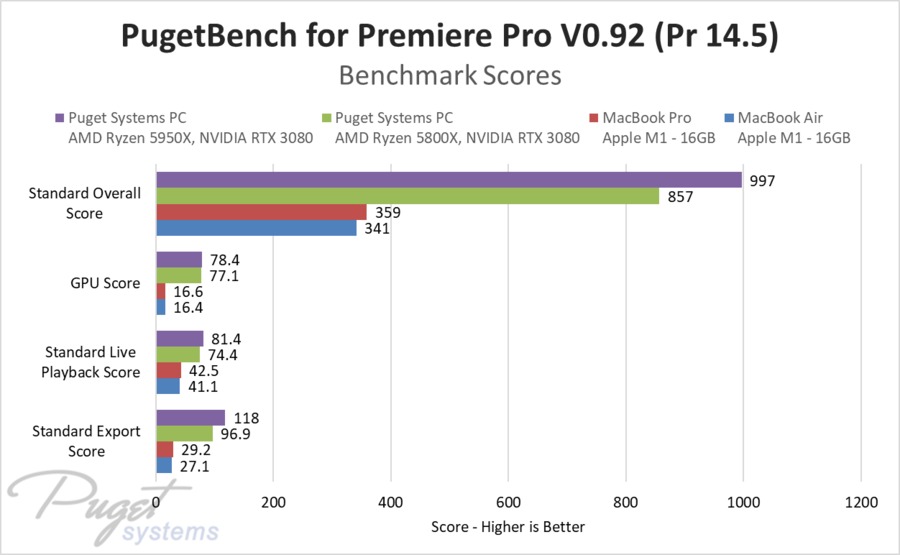 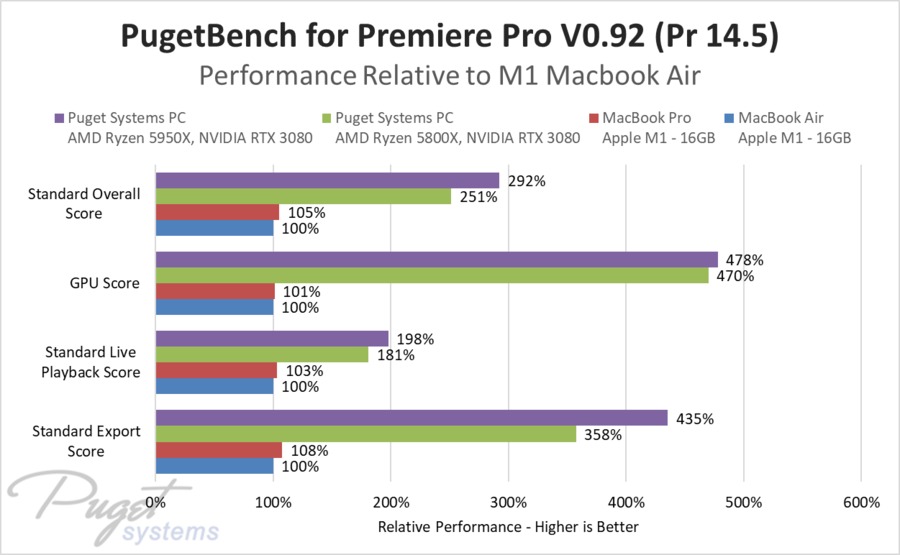 Last up is our PugetBench for Premiere Pro benchmark which has a bit more interesting results than the other two benchmarks. Not only is the "GPU Score" almost 5x higher on the desktops, but even exporting is around 4x higher. Our export tests includes exporting to ProRes as well as H.264 with the ProRes exports benefiting from the higher CPU power and the H.264 exports benefiting from having a discrete GPU.

Live playback is also much higher on the desktops, averaging around 2x the performance of the MacBooks. However, this is one test we intend to update since around half of the tests have become too "easy" for modern computers. If most configurations are able to play the media at full FPS, then there is no way to show relative performance between each configuration. If you instead only look at the more intensive multicam playback tests, the desktops are again about 4-5x faster than the MacBooks.

As for a desktop configuration that is roughly the same performance as these MacBooks, we found a number that performed roughly in the same ballpark:

It was actually difficult to find desktop results that were as low as the MacBooks (although there are plenty of laptops in the same range), but both of these CPUs were released in 2017. However, the Ryzen system, in particular, is significantly faster than the MacBooks, so it is likely that a decently configured desktop from 2016 would be in line with the new MacBooks. In other words, it would be reasonable to expect that these Apple M1 MacBooks perform about on par with a decently configured desktop PC that is around 3-4 years old.

From a performance standpoint, the new Apple M1 MacBooks do fairly well considering that they are using a complete processor based around the ARM instruction set and software that is likely not fully optimized yet. But compared to a typical desktop workstation from Puget Systems that is around 2-3x faster on average (albeit at a higher cost), they certainly can't keep up.

These units only cost around $1,500 as configured, however, so the fact that they are half the performance shouldn't be unexpected since they are also half the cost. What will be very interesting to see is how performance will shake out as Adobe improves support for native Apple Silicon and when (or if) Apple launches a higher-end laptop – or even better, a more powerful desktop variant than the Mac Mini.

Another way to look at it is that these new MacBooks (and presumably the Mac Mini) are roughly equivalent to a desktop that is around 4-5 years old. So if you have a PC from 2015 or 2016, be aware that these MacBooks likely won't be any faster. Comparing laptops to desktops in somewhat of an "apples to oranges" comparison since they are really different tools for different jobs, but if you are thinking about moving from a desktop to an Apple MacBook, hopefully, that provides a bit of context for what you can expect in terms of performance.

Overall, this move to ARM is very interesting, and something we are going to be keeping a close eye on. We have recently seen what can happen when two companies (AMD and Intel) are highly competitive, and throwing a third player into the mix should only be a good thing for both Mac and PC users.