How Fast is the new Multi-Frame Rendering in After Effects 18.1 BETA?

Written on March 10, 2021 by Matt Bach
Share:
Always look at the date when you read a hardware article. Some of the content in this article is most likely out of date, as it was written on March 10, 2021. For newer information, see After Effects Multi-Frame Rendering Processor Performance Analysis
Table of Contents

TL;DR: How well does Multi-Frame Rendering work in After Effects BETA?

Overall, we are very impressed with the upcoming Multi-Frame Rendering feature in After Effects. It is still in BETA with many features yet to come, but in our early testing, performance improvements of 1.5-2x are not uncommon, and in certain situations, we saw more than a 3x improvement in render times. There are certainly still kinks for Adobe to work out (hence why it is in beta), but as the first iteration of this feature, it is very, very good.

In the After Effects BETA that became available this morning (3/10/2021), Adobe has added a new feature called "Multi-Frame Rendering". This feature is still very much in development but dramatically increases After Effect's ability to utilize processors with higher core counts. At the moment, it is just for rendering (exporting), although Adobe has noted that support will expand to composition preview in the coming months.

If you want more information on how this feature works, Adobe has a terrific Blog Post and FAQ that we highly recommend checking out. They are touting performance gains of 1.2x to 3x depending on the specs of your system - which is what we want to examine in this post. Adobe is helpfully providing a test project to use as a benchmark, but we will also use our normal PugetBench for After Effects benchmark as the test project is likely a "best-case scenario" in order to show off this new feature.

Multi-Frame Rendering is still in BETA. We fully expect performance to change as Adobe works out the bugs and improves this feature over time. This article is meant as a first look or preview of how it may affect straight performance, as well as what CPUs we recommend in our After Effects workstations once it hits release. 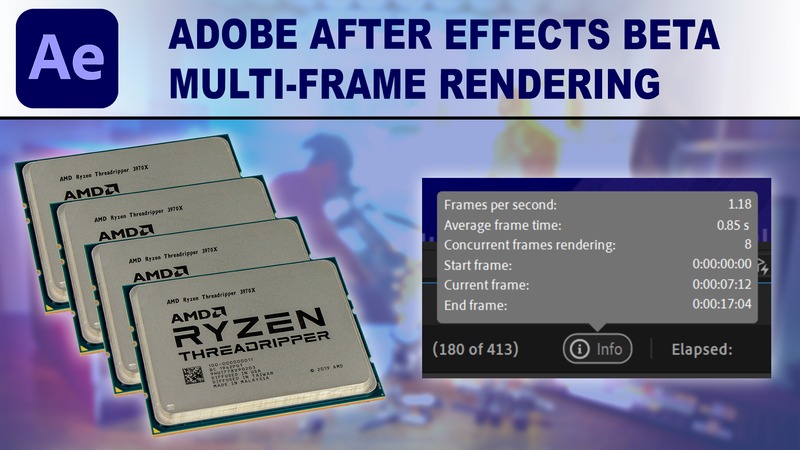 We ended up over-doing our testing a bit and ended up looking at 9 different CPUs with 11 different After Effects compositions. If you don't want to look through all the data, feel free to jump right to the conclusion for our final thoughts.

*All the latest drivers, OS updates, BIOS, and firmware applied as of March 10, 2021

In order to see how each of these configurations performs with the new Multi-Frame Rendering feature in After Effects, we will be using our PugetBench for After Effects V0.93 benchmark as well as the test project provided by Adobe in their Blog Post. One thing to note is that since this feature currently only supports rendering (exporting), we will not worry about presenting the RAM Preview or Tracking results.

Starting off with the good!

In most of our testing, we saw anywhere from decent to excellent performance increases with Multi-Frame Rendering. We will touch on the few times where we did not see a benefit with this feature in the next section, but first, let's take a look at these "good" test cases:

By far, the "AE Pulse Benchmark" test project provided by Adobe shows the most impressive gains with this new feature. This makes sense, as to why would Adobe use a project that wasn't a best-case situation as an example? We wouldn't call this project a synthetic test by any means, however, and is well within what you might see in your own workflow.

With this composition, the smallest performance gain was around 1.4x on the lower core count CPUs like the Intel Core i5 10600K 6 Core and AMD Ryzen 7 5800X 8 Core. This steadily rose to about a 2x improvement with the 10-16 core CPUs, and peaked at a 3.25x (!) increase in performance with the AMD Threadripper Pro 3975WX 32 Core. Interestingly, even though the Threadripper 3990X has double the cores of the Threadripper 3970X (64 vs 32), it was not any faster with Multi-Frame Rendering. This suggests that at a certain point, more cores won't help as the system is bottlenecked by other parts of the computer like the RAM, GPU, or I/O bandwidth.

The next best compositions for this feature were the "Expressions", "Motion Blur", and "Cloud Lightning Project" portions of our After Effects benchmark. Interestingly, the performance gain was fairly similar across all the CPUs for these tests - coming in at an average of 1.7-1.9x faster.

From there, the performance gains get less impressive with the "Phone Composite" and "Realistic Rain" projects averaging anywhere from 1.1x to 1.2x faster with Multi-Frame Rendering. This is still a nice bump in performance, but nothing like the other compositions.

Still a few rough spots to work out...

As a reminder, Multi-Frame Rendering is in BETA and very much still in development. We would frankly be astonished if we did not encounter any issues with it! Through the course of our testing, we actually didn't have any stability issues, but there were a few instances where performance was a bit worse with it enabled:

The first rough spot we found was with the "Glitch" composition in our PugetBench for After Effects benchmark. We did still see some decent performance gains (primarily with the Intel Core i5 10600K), but on many of the higher-end CPUs, we saw about a 10% drop in performance with Multi-Frame Rendering.

The two compositions that look at performance with the Cinema4D rendering engine are where Multi-Frame Rendering had the biggest issues. It makes sense that this would be problematic since it is not only using After Effects, but also an external rendering engine. With these two compositions, we saw on average a 15% drop in performance with Multi-Frame Rendering, with a 30% drop on the Intel Core i9 10980XE being the most severe.

Will this change what CPU is best for After Effects?

One of the biggest things we wanted to find out with this early testing was whether it is likely to change what CPUs we recommend for After Effects. In previous versions, the AMD Ryzen line was best in terms of pure performance even though they have significantly fewer cores than the AMD Threadripper and Threadripper Pro line. With improved multi-core capabilities, however, this very well may change. 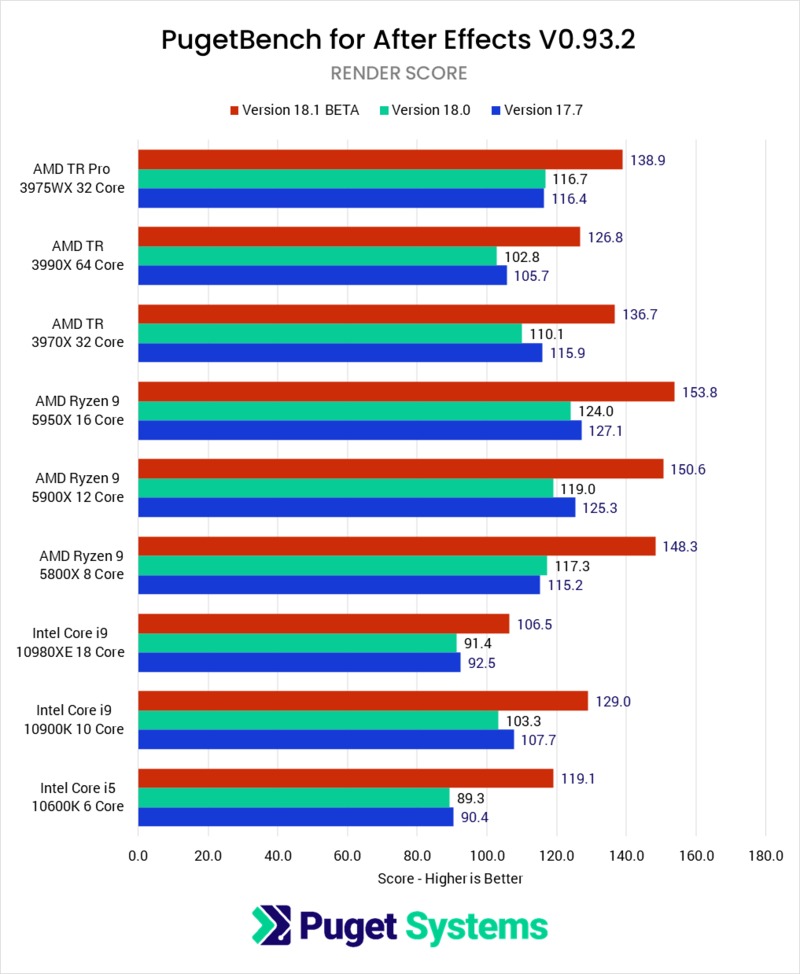 To get a broad look at how performance may change once this feature hits release, we grabbed the "Render Score" from our PugetBench for After Effects benchmark runs for each CPU. We also went ahead and ran our benchmark on the 17.7 and 18.0 versions of After Effects so we could see how the relative performance changes across the three versions.

Overall, it doesn't look like the relative performance for each CPU is going to change all that much. The absolute performance is of course higher with 18.1 BETA using Multi-Frame Rendering, but it looks like the AMD Ryzen line will still be the one to use for maximum performance, while Threadripper sacrifices a bit of performance in order to dramatically increase how much RAM you can install in your system (which in many workflows is well worth the small performance hit).

This would change a bit if we included the AE Pulse Benchmark from Adobe, but even there, the AMD Threadripper CPUs only match the AMD Ryzen 5950X 16 Core. Threadripper Pro, however, does manage to take a slight lead in that test.

How well does Multi-Frame Rendering work in After Effects BETA?

Overall, we are very impressed with the upcoming Multi-Frame Rendering feature in After Effects. It is still in BETA with many features yet to come, but in our early testing, performance improvements of 1.5-2x are not uncommon, and in certain situations, we saw more than a 3x improvement in render times. There are certainly still kinks for Adobe to work out (hence why it is in beta), but as the first iteration of this feature, it is very, very good. 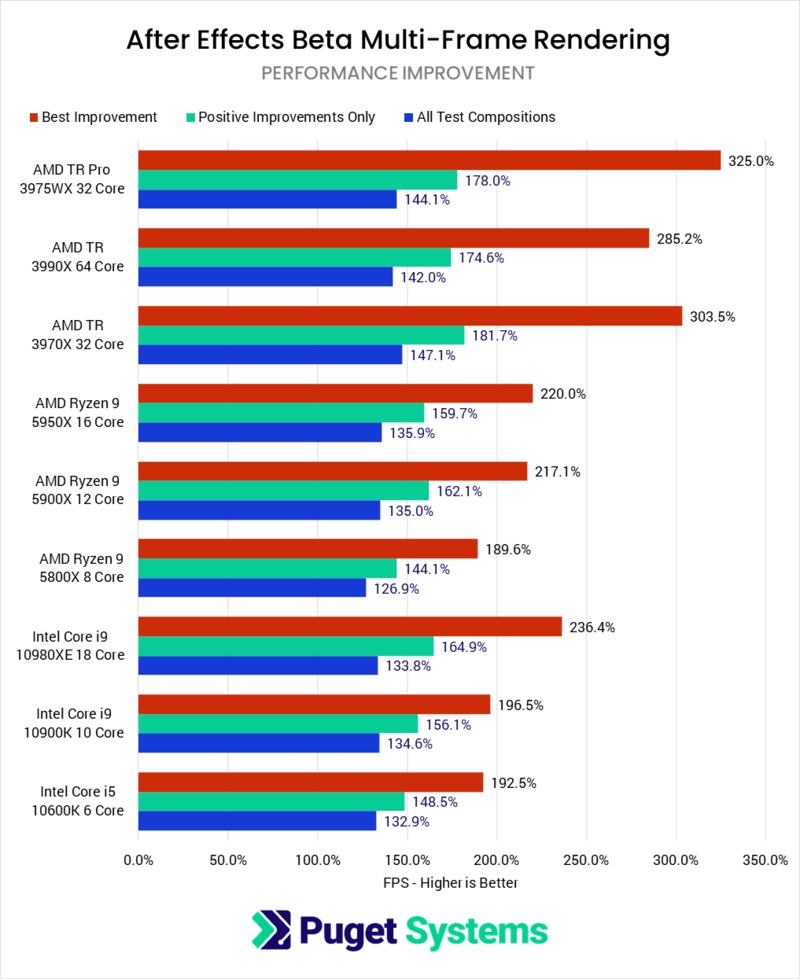 As you might have guessed by the number of CPUs and compositions we included for a feature that is still in beta, we are very excited about Multi-Frame Rendering. It doesn't appear that it will dramatically change what kinds of workstations we sell and recommend for After Effects, but in many ways that is a good thing. If it were to suddenly change what kinds of CPUs are best, we would be left with a huge number of users that suddenly have systems that are not optimized for After Effects. Instead, this is looking like something that will simply be a boon for everyone.

We look forward to seeing this feature developing in the coming months - especially when composition preview support is added! Keep an eye on our articles, as we will likely post follow-up articles as this feature is expanded and improved.