Skip to content
Always look at the date when you read an article. Some of the content in this article is most likely out of date, as it was written on March 17, 2021. For newer information, see our more recent articles.

Choosing the best PC for any software package is already a daunting task, but when looking at something like Unreal Engine it gets even more complicated. At Puget, we strive to give you as much information as we can to make sure you are getting the right hardware for your needs. We have an ever-growing list of hardware articles for those who like to get into the details, as well as our solutions page that help find the most common parts.

However, there is no one way to use Unreal Engine. It is used to make everything from mobile games to virtual reality, to Hollywood productions like The Mandalorian and Westworld. It powers the “infotainment” systems of automobiles and is used to collaborate in VR on the development of those cars. Many news and sports broadcasters have adopted it for virtual sets and real-time graphics. The use cases go on and on, and each has its own hardware needs. We’ll go through the most common use cases our customers are looking for and detail what specific parts are the best for each. Because there are so many different use cases to go over, we’ll just do the “Best” setup for each instead of our usual “Good, Better, Best” recommendations seen in other articles. 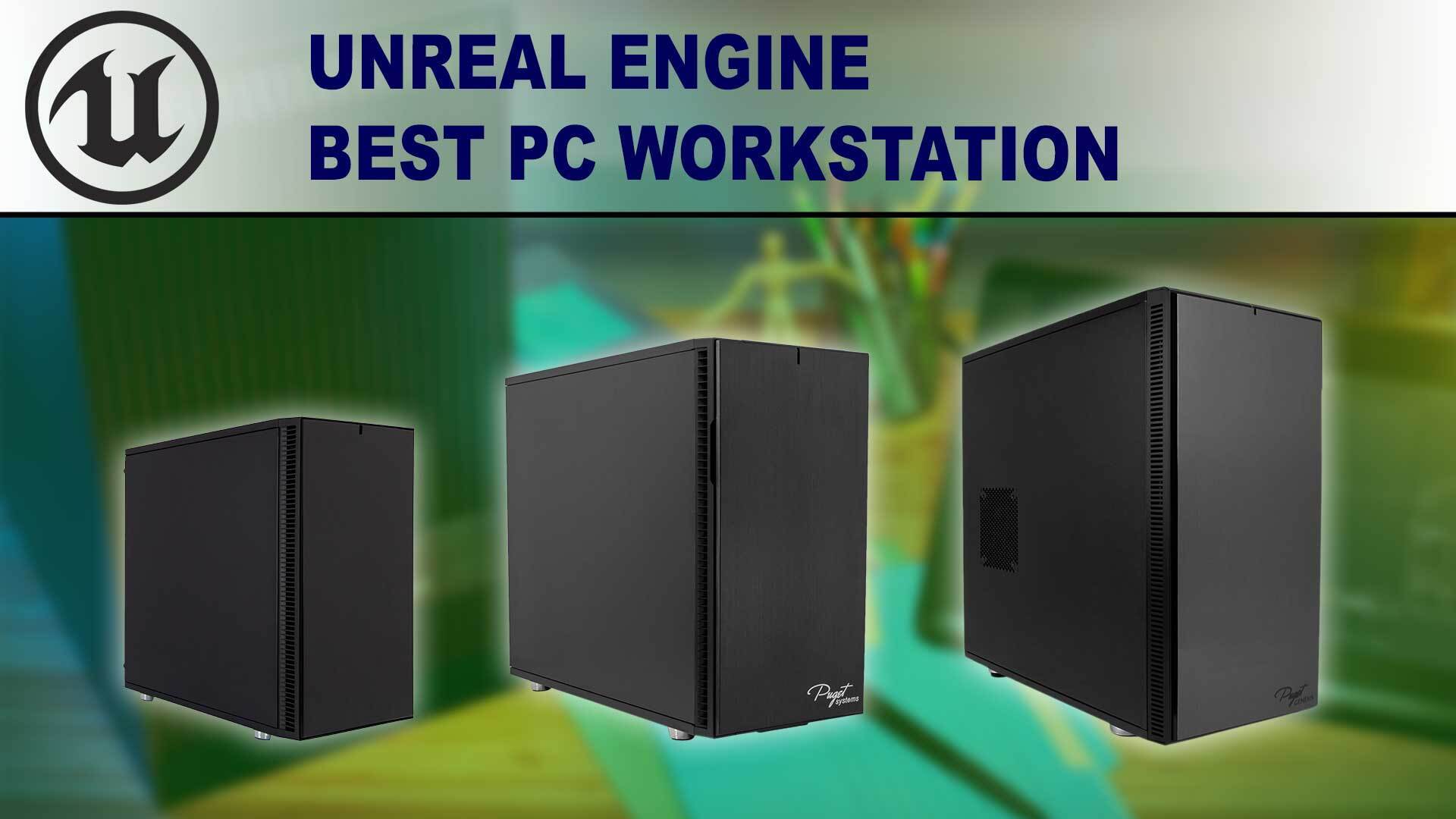 Something to note is that we are going to primarily focus on the hardware that will directly affect performance. Things like a Blackmagic Decklink capture card, 10Gb networking, and peripherals are all incredibly important, but outside the scope of this post

The primary use for Unreal Engine is still game development. Unreal is used for everything from mobile games, to high-end PC titles, as well as numerous games on every console. Not every game made with Unreal has the same hardware requirements, and in turn, not every developer needs the same configuration.

One of the more demanding aspects of development is the need to compile code or shaders. Users that spend most of their time writing code or dealing with a large number of shaders, say on a major game, will want to focus on the CPU in their system. Specifically, the more cores the CPU has, the faster it will compile code. Currently, AMD’s Threadripper line is the top option for heavily threaded workloads, offering up to 64 cores/128 threads.

For RAM you’ll want to max out the number of memory channels that the CPU supports. In the case of Threadripper, that would be four sticks, preferably 128GB, or up to 256GB.

GPU is less of a concern for many of these users, but the NVIDIA GeForce RTX 3080 will cover the majority without the extra cost of an RTX 3090.

The other side of game development is the artists such as modelers, animators, and the like. Their biggest need is maintaining visual quality and a high frame rate. Nothing takes an artist out of their workflow like struggling to move objects around a very laggy scene. If every action they take causes frustration, their productivity will be low. As such, they need the best video card. NVIDIA’s RTX 3090 provides a significant amount of horsepower, as well as a massive 24GB of VRAM, meaning it can handle a massive amount of polygons and materials without a struggle.

For RAM we’d recommend 64GB, especially if you have additional programs running alongside Unreal, such as motion capture, or video capture software.

There will still be some shader compiling, to a lesser degree than a full project, so AMD’s Ryzen 9 5950X will provide enough power to get through that task. It still has a lot of cores without the high cost of Threadripper but also has a very high per-core performance.

Because there isn't much need for many add-in cards, a smaller case can be used. This makes it much more convenient to sit on a desk without taking too much space.

Virtual Production is a newer field in the film and TV industry. It is somewhat used as a catchall phrase, and there isn’t a set workflow that everyone uses. Some use video walls to display the content and record live actors in front of the wall, while others use a green screen and comp the background in. Others use motion capture suits to control digital actors. Some will capture the performance and then send the footage off for post-production to add in add VFX or other elements, while others broadcast a live show to TV or online. Regardless, we can break the hardware down to two main categories; LED wall and green screen.

Large LED walls or volumes have quickly gained popularity, especially after The Mandalorian relied heavily on them for its production. Since then, dozens of volumes are popping up at studios all around the world. To run these walls takes some specialized hardware. On the PC side, the key component is the video card – specifically, a video card capable of syncing its framerate with the wall, video camera, and other systems controlling the rest of the wall. This requires NVIDIA’s professional line of video cards with their Quadro Sync II card. The RTX A6000 is the current top card with Sync capabilities.

At higher resolutions, the main processor has little impact on the frame rate. However, if you need to recompile shaders, rebuild lighting, or perform any other CPU constrained task, you’ll want as many cores as possible to get it done as fast so your crew isn’t waiting around. The extra cost of a higher core CPU will easily be offset by reducing downtime for a full cast and crew.

Again, RAM becomes more important if you have additional programs running. Unreal already takes a lot, and any additional software will consume even more. Maintaining your target framerate without any hiccups is essential to filming an LED wall, so running out of memory is not something you want to have happen while shooting.

If you aren’t using an LED wall, your options for video cards are much wider. There isn’t really a need for the extra features that NVIDIA’s professional line offer, so the consumer GeForce cards are a better option here. Currently, the NVIDIA RTX 3090 is the top card, letting you push visual fidelity to the limits while still maintaining your target frame rate.

CPU options also open up depending on the scale of your production. If you don’t have a lot of shaders to chew through and aren’t using baked lighting, then AMD’s Ryzen 9 5950X is a fantastic option.

We are sticking with a larger case for this configuration. This will provide extra room for multiple add-in cards, such as the Intel Dual 10 Gigabit ethernet card, or a capture card.

Architects are increasingly adopting real-time engines for their previews. It allows them to walk through a space with their clients, and make any changes on the fly without needing to re-render the scene. This can be done in Unreal Engine or Twinmotion, Epic’s architecture-specific application based on Unreal.

The GPU will be the main focus once again, this time pulling double duty – either needing the additional power for full, real-time ray tracing or for GPU lightmass baking with the built-in option or Luoshuang's GPULightmass plugin. Once again, NVIDIA’s RTX 3090 is the best option, with its massive 24GB VRAM allowing for a lot of very high-resolution textures to exist in the scene without a negative impact on performance. The NVIDIA RTX A6000 is an alternative for those who need a professional card for their CAD programs.

In the past, a higher core Threadripper CPU may have been recommended for baked lighting, but GPU options have been delivering superior results with less time, so AMD’s Ryzen 9 5950X is now the best choice.

If you want to know more about how Unreal Engine performs with various hardware as well as our justifications for these recommendations, we have a number of resources available. For those that want just a bit more information, we recommend visiting the "Hardware Recommendations" section of our Unreal Engine Solutions page. If you really want to dig into the numbers behind the data, we also have an on-going series of hardware articles that are regularly updated.