SCSI vs SATA, Which is Faster?

When configuring a server or high end custom computer, we are often asked about the performance benefits of SCSI over SATA. Since SCSI is much more expensive, the common perception is that it must be significantly faster. The short answer we give to that issue is that with the release of 10,000 RPM SATA drives, SCSI simply does not hold the edge it used to, and we do not feel it is worth the sizable increase in cost. Of course, that statement is very general. Surely there are still applications that greatly benefit from SCSI, and it is the goal of this article to take a deeper look at the performance differences in SCSI vs SATA, and to tell you how those differences translate to performance in real world applications.

As with any analysis, we must first look at the benchmarks. As you may know, the biggest difference between SCSI and SATA is that while SCSI has a processor integrated into the controller, SATA makes greater use of the system processor to serve that function. Therefore, the first step we will take in our analysis is to take a close look at how big the controller and rest of the computer plays in the performance of the drives. Will a higher end SCSI controller greatly increase the performance of a SCSI drive, and will a faster system processor help an SATA drive?

For nearly a year now, we have been benchmarking every system that leaves our door. This gives us access to an incredible wealth of data that we can put to great use here. We will begin by looking at all benchmarks with a 74GB 10k RPM SATA hard drive, to see how the disk performance differs from system to system.

The interesting result is that the CPU speed of the system plays virtually no factor in the speed of the drive. Pentium 4 systems and dual Xeon systems all score in the 5,600 range for overall hard drive benchmarks. It is important to note, however, that a few of our benchmarks using the A8N-SLI motherboard scored in the 6,300 range! This significant increase was due to the fact that the 74GB Raptor drive supports native command queuing, which is used on the A8N-SLI motherboard. Newer controllers and motherboards should also be using this NCQ technology, so if your SATA hard drive supports it, you'll benefit from this increase. 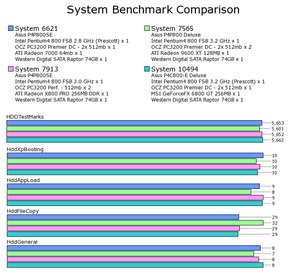 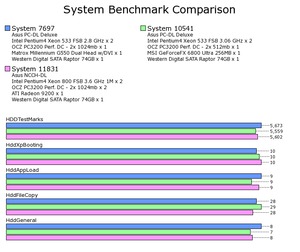 What is native command queuing? It is a technology that has been used in the SCSI world for quite a while, but only recently has been introduced to SATA drives. This explanation is an excerpt from Neoseeker's Nforce 4 Tech Preview.

So, we see that while the speed of the computer plays very little role in the performance of the disk, NCQ does make a difference. 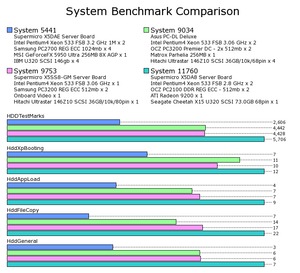 Next, we'll do the same comparison technique with various SCSI hard drives. This is a bit more tough since we sell far fewer systems with SCSI drives, but we still see a remarkably predictable trend: while the speed of the SCSI drive makes a large difference, the speed of the system it is in does not make a difference. Note the very similar performance of the maroon and green systems in the graph. The green system is dual Xeon, and the maroon system in a single Xeon, but the performance of the hard drive is nearly identical. In contrast, the slower 146GB SCSI drive shows a significant speed drop, while the 15,000 RPM drive is much faster. 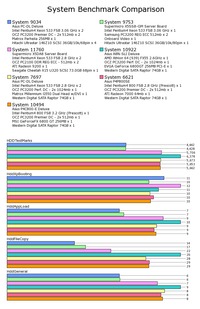 After taking a look at these benchmarks, we have a very clean outcome: on all cases, the speed of the rest of the system has nearly nothing to do with the speed of the hard drive. This makes the job of comparing hard drives very easy! It means that we can use nearly any benchmark to compare drives, since the rest of the system does not play a role. Of course, everything so far has been interesting...but was just a prerequisite to the rest of the article! The next step is to see how SCSI compares to SATA in performance.

Frankly, I was surprised by the results! They show that SATA has a performance advantage! 10K RPM Raptor SATA drives appear to be on par with the performance of even a 15K RPM SCSI drive, and with NCQ, SATA even holds a very significant lead!

Now keep in mind that we're strictly talking about hard drive performance. Take a look at the "XP Booting" benchmarks in the last graphic -- you'll notice that is the area in which SCSI holds one of the only advantages to SATA. This is due to CPU utilization -- SCSI drives simply don't use as much CPU power to run, leaving more CPU time for the rest of the system. Based on those numbers, if you are looking to build the fastest possible computer, it does appear that SCSI holds onto a very marginal performance lead. If you are only concerned with getting the highest disk throughput possible, then SATA with NCQ is the way to go! I should also add that given the right SCSI drive (ie, a 146GB 15k RPM), you can still beat the performance of the 74GB Raptor with NCQ, but your costs will be three to four times higher.
Tags: Sales, Products, Hard Drives, Performance