Visualize is not only able to utilize the GPU but is also able to utilize multiple cards at once. The question we want to answer in this article is exactly how effective it is at using multiple cards. If it doesn't scale well then you would want to prioritize using a smaller number of more powerful cards, but if it does scale well you will likely see great benefits from using a higher number of individual cards.

If you are interested in how individual Quadro and GeForce cards perform in Visualize, we recommend reading our other Visualize articles:

Our test platform is based on the Quad GPU Workstation from our SOLIDWORKS Visualize Recommended Systems. We will be testing in GPU only mode, but to ensure that we do not have any CPU or RAM bottlenecks we are using the fastest Core i7 CPU currently available and have many times more RAM in the system than we need. Dassault Systemes does not yet have a formal hardware requirements list or an official stance of whether they recommend you use a workstation or consumer card, but in this article we will be testing with the GTX 1070 and Titan X cards in order to test both a mid-range and high-end option to see if the scaling changes at all. 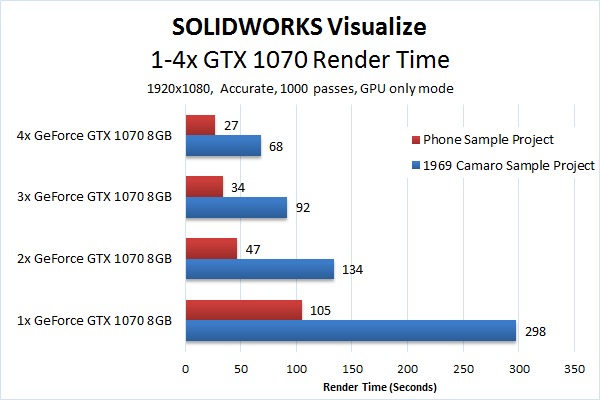 Starting with the GTX 1070, the results are really straight-forward. Simply put, two cards are two times faster, three cards are three times faster, and four cards are four times faster. There is a little bit of variance between our two test renders, but the difference was actually much smaller than we expected. 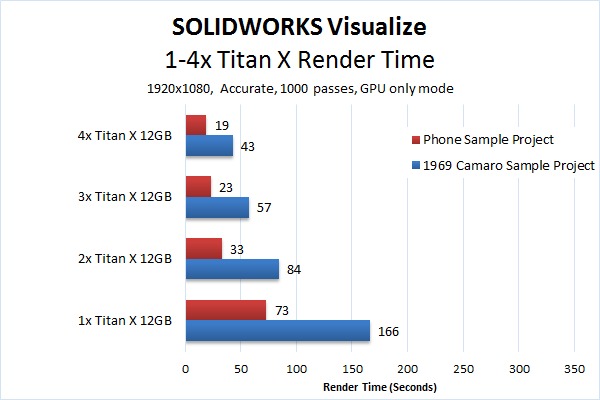 Moving on to the Titan X, the results are largely the same: two cards are twice as fast and three cards are three times as fast. There is a small drop-off with four cards (it is only 3.85 times faster) but even with that the scaling is still extremely good. This may affect expected performance from an eight GPU server or if you will be using Visualize Boost (network rendering) but the majority of users can effectively consider Visualize as having perfect scaling.

Our testing is really cut and dry, so this is going to be a very quick conclusion section. In short, for most users Visualize has effectively perfect scaling with multiple GPUs. We saw a small drop in performance with four Titan X cards, but it was fairly minor to the point that we really wouldn't worry about it.

For all practical purposes, compared to a single GPU you should be able to expect about twice the performance with two GPUs, three times with three GPUs, and four times with four GPUs.