Skip to content
Always look at the date when you read an article. Some of the content in this article is most likely out of date, as it was written on February 7, 2017. For newer information, see our more recent articles.

SOLIDWORKS Visualize (formerly known as bunkspeed) is a relatively new addition to the wide range of product offered by Dassault Systemes. Based on the NVIDIA Iray rendering engine, Visualize is able to utilize the power of both the CPU and the GPU to complete renders extremely quickly. However, the choice of your GPU (and the use of multiple GPUs) is much more important than your choice of processor when it comes to raw render times.

Dassault Systemes does not yet have a formal hardware requirements list or an official stance of whether they recommend you use a workstation or consumer card, but in this article we will be focusing on various NVIDIA Quadro cards to see how they perform relative to one another. A GeForce card should give you more performance for your dollar, but not only is there a high likelihood that Dassault Systemes will eventually decide to only certify workstation cards but Quadro cards are also more reliable. Overall, here at Puget Systems we see about half the failure rate with Quadro compared to GeForce. Considering the fact that GeForce cards are actually very reliable already, this makes Quadro cards ideal if uptime and reliability is more important to you than getting the best performance for your dollar.

If you are interested in how GeForce cards perform or how Visualize scales with multiple GPUs, we recommend reading our other Visualize articles:

Our test platform is based on the Dual GPU Workstation from our SOLIDWORKS Visualize Recommended Systems. We will be testing in GPU only mode, but to ensure that we do not have any CPU or RAM bottlenecks we are using the fastest Core i7 CPU currently available and have many times more RAM in the system than we need. The Quadro cards we are testing are a mix of Maxwell and Pascal based cards, but with the exception of the M6000 they are all the latest cards available at each price point. The M6000 was replaced by the P6000, but we decided to include it as a way to compare the older Maxwell architecture to the newer Pascal architecture. 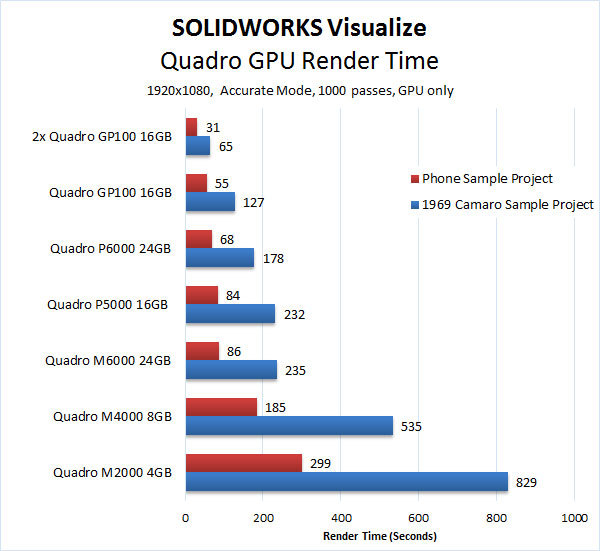 The two projects used in our testing certainly rendered at very different speeds, but the relative performance between the different video cards was actually very consistent across both of them. Putting these results into relative numbers, the Quadro M4000 was about 50% faster than the M2000 and the M6000 was just a bit more than twice as fast as the M4000. We unfortunately did not have a M5000 available to test, but we would expect it to fall almost exactly in between the M4000 and the M6000.

Moving up to the newer Pascal cards, the P5000 was just a hair faster than the M6000 but in a practical sense it effectively performs the same. The P6000 didn't give as significant increase in performance as the other cards, but it is still 30% faster than the P5000/M6000.

The latest addition to the Quadro lineup – the GP100 – is a very interesting card. According to the raw CUDA core count and core frequency, it should technically be a bit slower than the P6000 but oddly it is actually 20-30% faster. There are a few things unique to this card like increased double precision performance, but the most likely thing affecting performance here is the addition of the High Bandwidth Memory. This is much faster than even the GDDR5X VRAM used on the P6000 and appears to make a pretty significant difference.

We have already shown that Visualize scales almost perfectly with more GPUs in our GPU scaling article, but we did want to go ahead and include the results with dual GP100 cards for those that are interested. In short, the scaling even at this high level is still extremely good and results in render times that are just under half of what it would take with a single card.

Overall, we did not really find any surprises in our testing. There is a very nice increase in performance going from the M2000 to the M4000, and an even better increase going from the M4000 to the P5000. The performance benefit to the P6000 is definitely much less (only about 30%) but even that is not terrible if you need the absolute fastest render times. Going all the way up to the new GP100, we saw a further 20-30% increase in performance compared to the P6000. Considering the price difference between the P6000 and the GP100 should be much smaller than the pricing difference between the P5000 and the P6000, if you are already considering the P6000 then the GP100 should definitely be on your radar as a way to get a decent bump in performance for a (relatively) moderate increase in price.

This excellent increase in performance across the various models has a very interesting side effect in that it vastly simplifies your choice of GPU. With other GPU-based rendering engines (such as Octane Render) you run into situations where using a larger number of cheaper cards is actually faster than using fewer, more expensive cards. Just like Octane, Visualize scales almost perfectly with multiple cards but due to the great performance improvements across the different models you really don't have to make this choice. Until you get all the way up to the P6000 you get pretty much the same increase in performance as the increase in cost so you might as well spend the same dollar amount on a single GPU instead of spreading it out over multiple cards.

For example, the P5000 is about twice as expensive as the M4000 but is actually a bit more than twice as fast. So while you could spend the same money on two M4000 cards, you might as well just get a single P5000 (or two P5000 vs four M4000). Not only are fewer cards a much simpler configuration (which typically means less problems with heat, drivers, and other things), it will also be much easier to expand in the future if you need even more performance.

As long as you stick to the newest generation cards, really the only cards with any caveats to them are the P6000 and GP100. All the others have great relative performance for their price points, but these cards at the very top of the performance stack are definitely a case of diminishing returns. If you need the absolute best performance regardless of budget, however, the GP100 in particular provides incredible performance in Visualize that can't be matched by any other card currently on the market.