Dassault Systemes does not yet have a formal hardware requirements list or an official stance of whether they recommend you use a workstation or consumer card, but in this article we will be focusing on the NVIDIA GeForce line of cards. These cards should give you much more performance for your dollar than a Quadro card (which makes them very popular with those looking to maximize performance), but it is worth keeping in mind that there is a high likelihood that Dassault Systemes will eventually decide to only certify workstation cards for Visualize. In addition, if you plan on using the same workstation for SOLIDWORKS as well as Visualize be aware that SOLIDWORKS really works best with a Quadro card. They may be more expensive than their GeForce counterparts, but we found in our testing that even a low-end Quadro card will outperform the fastest GeForce card in key situations.

If you are interested in how Quadro cards perform or how Visualize scales with multiple GPUs, we recommend reading our other Visualize articles:

Our test platform is based on the Dual GPU Workstation from our SOLIDWORKS Visualize Recommended Systems. We will be testing in GPU only mode, but to ensure that we do not have any CPU or RAM bottlenecks we are using the fastest Core i7 CPU currently available and have many times more RAM in the system than we need. We will be testing a range of GeForce cards ranging from the GTX 1060 to the Titan X. 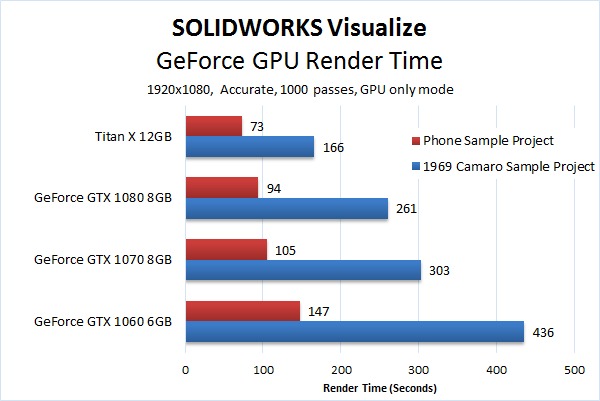 The two projects used in our testing certainly rendered at very different speeds, but the relative performance between the different video cards was actually very consistent across both of them. Putting these results into relative numbers, the GTX 1070 was about 40% faster than the GTX 1060 and the GTX 1080 was just under 15% faster. Going up to the Titan X, there is actually a very decent 43% increase in performance.

These performance gains are not as significant as what we saw in our Quadro testing but it is worth pointing out that the GeForce cards don't have nearly the same price scaling as the Quadro cards and the Titan X actually performs almost exactly the same as the P6000 for about 1/4 the cost. So while the performance gains are smaller for each model, these cards will definitely still give you much faster render times for the same dollar amount.

Even though this article is more about the relative performance between GeForce cards, it is worth pointing out that because Visualize scales almost perfectly with multiple GPUs it brings up some interesting considerations. The Titan X is almost exactly twice the cost of the GTX 1070, but from a performance standpoint it is only about 60% faster. So if you are looking to get the maximum performance for your dollar, you might be considering using two or four GTX 1070 cards instead of one or two Titan X cards. While this is technically more performance for your dollar, we do want to point out that while more GTX 1070s might be slightly faster, it is a much more complex configuration. Not only will you need a physically larger workstation to house the extra cards, but you will also need a motherboard that supports that many cards and a larger power supply. This will largely offset the cost savings you would get by using more GTX 1070s  – not to mention that you will need be able to add as many cards in the future if you choose to.

If you are trying to decide which GeForce card(s) to use for Visualize, our testing in both this article and our scaling article actually make the decision fairly easy. Once you have decided workstation requirements (size, power draw, etc), simply choose whichever number of GTX 1070 or Titan X cards fall within your budget. By sticking with these two models, you should almost always be getting the fastest possible render times for your dollar.