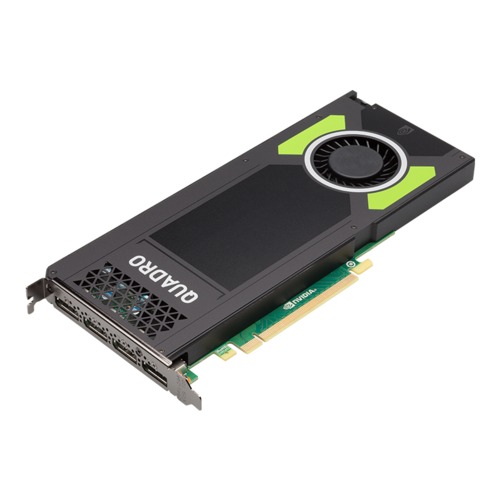 The NVIDIA Quadro M4000 is a high-end "professional grade" video card, based on the Maxwell GPU architecture and offering solid performance for 3D applications. Because of the Maxwell architecture it is more efficient than previous Quadro cards of this caliber, with very good single-precision floating point performance as well. This architecture is not very good at double-precision calculations, though, falling behind the previous generation of Quadro cards in that area. It has 1664 stream processors, a 256-bit memory bus, and 8GB of memory - giving it overall roughly half of the capability of the M6000... but in a single slot card, rather than the dual slot size of the M5000 and M6000.

In addition to good performance for professional 3D applications, the Quadro M4000 also supports more high-res monitors than previous generations. It can run up to four 4K screens at the same time, thanks to four DisplayPort outputs - which can be adapted to older video standards as well, if needed (only one DVI adapter is included). A wide range of standards are supported by this card: DirectX 12, OpenGL 4.5, CUDA, and OpenCL (to name a few).

William George (Product Development) Says:
This is the fastest single-slot video card of its generation, and a good choice for professional applications which need a moderate amount of 3D performance across multiple monitors.
Model: PNY VCQM4000-PB

Get real interactive expression with NVIDIA Quadro-the world's most powerful workstation graphics. Tackle your most demanding visualization workloads with ease using the advanced NVIDIA Maxwell GPU architecture and the flexibility of a single-slot form factor. 8 GB of ultra-fast memory enables the creation and rendering of large, complex models and the computation of massive datasets. A new display engine drives up to four 4K resolutions displays natively (4096 x 2160 at 60 Hz with 30-bit color). Pair up two or more outputs to drive displays greater than 4K, and take advantage of NVIDIA Quadro Sync support to frame-lock multiple displays together (see PNY PN VCQM4000SYNC-PB), or use external I/O boards and NVIDIA's GPUDirect for Video to integrate the Quadro M4000 into broadcast, video or film production workflows.