Skip to content
Always look at the date when you read an article. Some of the content in this article is most likely out of date, as it was written on July 30, 2014. For newer information, see our more recent articles. 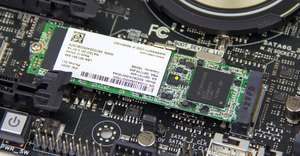 Hard drives (especially SSDs) are becoming faster and faster but have recently hit a performance wall due to the limitations of the current SATA specification. SATA III is rated for 6Gb/s, but in real-world scenarios is actually limited to a theoretical maximum throughput of only about 550-600MB/s. This is very fast but even current storage technology can theoretically go much faster than this.

M.2 is a new form of connectivity for SSD drives that allows drives to connect directly to the PCI-E bus rather than going through a SATA controller. By bypassing the SATA controller a M.2 drive can have a theoretical maximum throughput as high as 2GB/s. To put this into perspective, that is over three times faster than the 600MB/s SATA is limited to!

One thing to be aware of is that not all M.2 drives are created equally. M.2 includes backward compatibility with SATA, so there are some M.2 drives on the market that still use SATA instead of PCI-E and are thus still limited to 550-600MB/s. Even on the PCI-E drives, depending on the version they can use either 2 or 4 PCI-E lanes (x2 or x4) which can dramatically impact performance. One neat thing with these PCI-E M.2 drives is that you don't actually need a motherboard that has an integrated M.2 slot. In fact, you can use a very simple adapter to plug a M.2 card into almost any PCI-E slot on your motherboard. This makes it very easy to add a high-speed M.2 drive to almost any system.

Since M.2 is a relatively new form of connectivity, there are a number of questions we want answered before we add any M.2 drives to our product line:

For the test system, we used the following hardware:


For our performance and thermal testing, the M.2 drives were configured as secondary storage devices so that the OS would not impact our benchmarks. For the motherboard qualification section, we used the drives as the primary drive in order to determine if the motherboard was able to boot to the drive.

Since the Asus Z97-A's onboard M.2 slot only supports PCI-E x2 and most of the other motherboards simply don't have a M.2 slot, much of our testing was done using a M.2 to PCI-E x4 adapter. We chose to use an adapter made by "Bplus Technologies" since it includes a heatsink to help cool the drive – and as you will see later in this article, having a heatsink for M.2  drives is a very good idea.

Onboard x2 vs. PCI-E x4 Performance

M.2 drives can operate in either SATA, PCI-E x2, or PCI-E x4 mode depending on what both the drive and M.2 slot support. Currently, most M.2 slots that are found on motherboards are only able to support PCI-E x2 which should be a limiting factor for faster M.2 drives. The big question is how much of a performance loss you will see by using an onboard PCI-E x2 slot versus PCI-E x4.

To determine the performance difference, we configured the M.2 drives as secondary storage drives and ran benchmarks using CrystalDiskMark with the default settings (5 passes with 1000MB files). We first installed the drives into the Asus Z97-A's onboard M.2 slot running at PCI-E x2, then installed the drives into a M.2 to PCI-E x4 adapter to benchmark them at PCI-E x4 speeds. 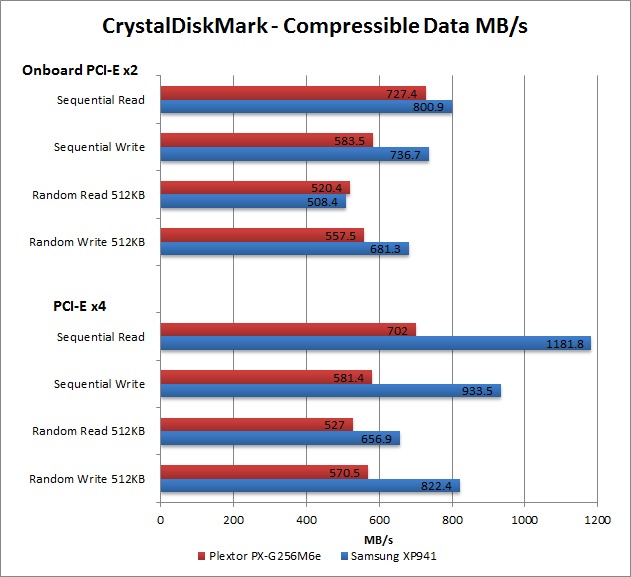 In terms of transfer speeds, at PCI-E x2 the Samsung drive is faster than the Plextor drive (especially in terms of write performance), but it is definitely being bottlenecked. When we moved the drives to PCI-E x4, the Samsung drive saw about a 50% sequential read performance increase and about a 25% sequential write performance increase. The Plextor drive, on the other hand, saw no benefit by using PCI-E x4 over PCI-E x2. This is to be expected since the drive itself is only designed to use two PCI-E lanes, but it is nice to see the benchmarks match our expectations. 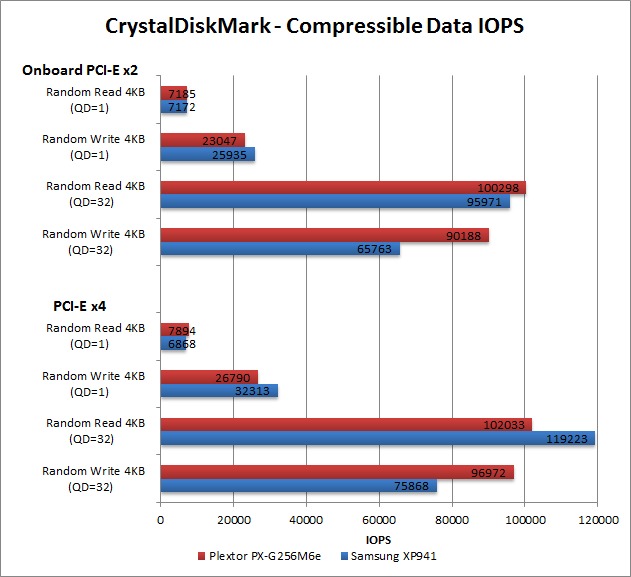 Moving on to IOPS (I/O Operations per Second), the Plextor drive again sees only a small difference between PCI-E x2 and PCI-E x4. Oddly, the Plextor PX-G256M6e actually outperforms the faster Samsung XP941 drive on the Random Write 4KB (QD=32) test. The Samsung XP941 again shows a performance benefit by using PCI-E x4 but unlike the transfer speed benchmarks, it is only by about 15-25%

To summarize, the Plextor PX-G256M6e (which is a PCI-E x2 drive) doesn't see much performance benefit by installing it in a PCI-E x4 slot, and in some cases it actually ended up performing a bit worse. However, the Samsung XP941 (which is a PCI-E x4 drive), definitely needs all four PCI-E lanes in order for it to run at peak performance.

We have seen some reports online of M.2 drives (specifically the Samsung XP941) running very hot, so we wanted to see for ourselves how hot both the Plextor and Samsung drives run. Unfortunately, these drives do not have any thermal sensors integrated that we could find so we were limited to using a thermal camera to find the hottest point on the top of the drive. This is not 100% accurate since there may be hot spots on the back of the drive but it is about as accurate as we can get with current M.2 drives.

Since idle temperatures are not a great indication of how cool a device runs, we wanted to load the drives using a real-world scenario. To do this, we placed roughly 103GB worth of ISO files on the drive and made a 1:1 copy of those ISO files while recording a video of the drive using a thermal camera. 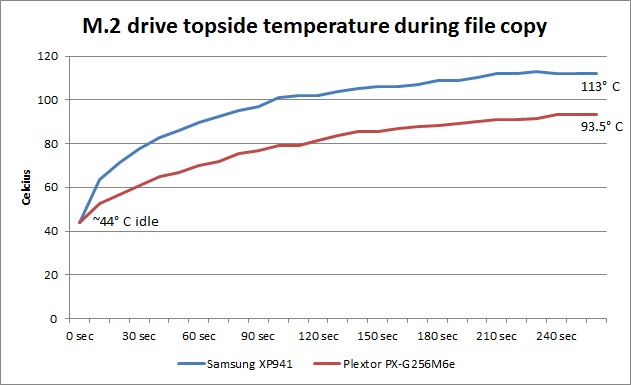 There are rumors of LSI and Marvell coming out with new, more efficient controllers in the near future so hopefully that will allow M.2 drives to run at a more reasonable temperature. Until M.2 drives are able to run cooler, however, we recommend using M.2 slots that are integrated onto a motherboard only if you are able to check the drive temperature to make sure it isn't overheating. Otherwise, we recommend using a M.2 to PCI-E adapter that includes a heatsink like the one we used in our testing. In fact, when using the heatsink the temperature on the Samsung XP941 dropped down from 113 °C to a maximum of about 53 °C which is a much, much safer temperature.

Since M.2 is a completely new storage specification, we wanted to do fairly extensive testing to determine which motherboards support M.2 drives. One thing we quickly found was that while every motherboard we tested can see both the Samsung and Plextor drives just fine as secondary storage devices, there we some problems using them as primary boot drives.

Due to this, we decided to test the majority of the motherboards in our current product line to determine which boards support booting to M.2 drives. Our testing consisted of simply installing Windows 8.1 in both BIOS and UEFI mode and seeing if the board would boot to the drive. There are some reports online that you can make a M.2 drive bootable by making it a single disk RAID then installing in UEFI mode, but what we are primarily interested in is which motherboards support booting to M.2 drives without having to go through a ton of extra hoops.


With the exception of the Supermicro H8QGi-F (which doesn't support UEFI), we were able to install and boot to the Plextor PX-G256M6e in either BIOS or UEFI mode on every motherboard we tested. Unfortunately, the Samsung XP941 isn't quite as widely compatible. In fact, the only motherboards we could get to boot to it were ones with either a Z97 or H97 chipset. Interestingly, these are also currently the only chipsets that include native M.2 support.

Even though we only tested a limited number of motherboards, our testing indicates that it is very likely the Plextor drive will work as a boot drive on nearly any modern motherboard while the Samsung drive will only work on newer chipsets that include native M.2 support. We did only test Asus and Supermicro boards, however, so if you have a different motherboard brand we recommend contacting the manufacturer and asking them which M.2 cards your motherboard will support booting to before purchasing a M.2 drive. 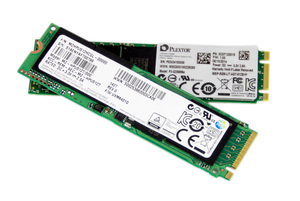 M.2 is interesting because it has some very distinct pros and cons, but the pros are muddied by the fact that not all M.2 drives are even close to each other in terms of performance. The biggest advantage to M.2 by far is the performance possible by using the PCI-E bus rather than a SATA controller. The Samsung XP941 very clearly shows this with its amazing transfer speeds that are over twice as fast as any SATA-based drive currently available. However, since M.2 can use either SATA, PCI-E x2 or PCI-E x4 there is a wide range of performance possible from a M.2 drive. The ones that use SATA likely won't be any faster than current SATA SSDs and like we saw from the Plextor PX-G256M6e, PCI-E x2 drives will likely only be about 30% faster than SATA SSDs. This is nothing to scoff at, but it means consumers will have to pay close attention to a drive's specifications when purchasing a M.2 drive.

Another advantage to M.2 is that you can use a very simple M.2 to PCI-E adapter to add one or more M.2 drives to your system. What we haven't touched on is the fact that an adapter card doesn't have to be limited to a single M.2 drive. While not available right now (that we can find at least) we completely expect someone to come out with a card that adapts four M.2 drives to a single PCI-E x16 slot. This would give you a ton of versatility since you could install four individual M.2 drives into a single motherboard slot or you could RAID the four drives together in a RAID0. Theoretically, this could allow for transfer speeds of up to 8GB/s which would almost match the performance of DDR3-1066 system RAM! 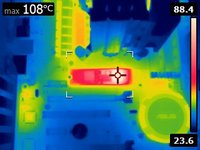 While the performance implications of M.2 are amazing, they certainly come at a cost. First, current M.2 drives run very hot. 113 °C on the Samsung drive and 94 °C on the Plextor when doing a few minutes worth of file copies is simply not acceptable. Luckily, there are M.2 to PCI-E adapters available that include heatsinks to help cool the M.2 drive. If you are using a M.2 slot on a motherboard, however, we recommend you keep a close eye on it to make sure it doesn't get too hot.

Finally, motherboard compatibility is not universally very good right now. The Plextor drive worked as both a storage and boot drive in every motherboard we tested, but the Samsung had problems booting on the majority of the boards we tried it on. Unless you have a Z97 or H97 motherboard, don't expect to use a Samsung XP941 as anything other than a storage drive.

Overall, M.2 is a very exciting technology. Potential performance is phenomenal and the current problems can all be worked around through the use of M.2 to PCI-E adapters and limiting your choice of motherboards if you want to use a Samsung XP941 as a boot drive. However, what we are even more excited for is the M.2 controllers LSI and Marvell are rumored to be working on that are supposed to be much more efficient than the current M.2 controllers. If this is true, we expect to see even better performance, reduced temperatures, and much better motherboard compatibility in the near future.