Skip to content
Always look at the date when you read an article. Some of the content in this article is most likely out of date, as it was written on August 10, 2015. For newer information, see our more recent articles.

Over the past few years, M.2 and PCI-E storage devices have become increasingly popular due to the incredible performance they are capable of. While the cost of these drives is often higher than standard SATA SSDs, current M.2 and PCI-E drives can be as much as four times faster and drives that are in development will be ten or more times faster!

The Samsung SM951 is the successor to what was at one time the fastest consumer M.2 drive – the Samsung XP941 (which we reviewed in a previous article). It comes in two flavors – NVMe and AHCI – depending on if you want maximum performance or better compatibility. The NVMe version should be very slightly faster overall, but the AHCI version will have much better mother compatibility if you want to install your OS directly onto the drive. 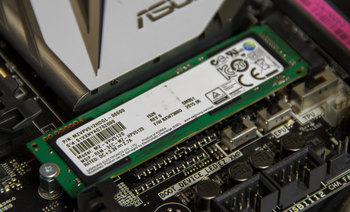 Both the AHCI and NVMe version of the SM951 should work as a secondary storage drive on any semi-modern motherboard, although if you want to use it as an OS drive we recommend purchasing the AHCI version. It is supposed to be very slightly slower, but as a tradeoff it should work as a primary OS drive on pretty much any motherboard. The NVMe version, however, can only be used as an OS drive if you install in UEFI mode and only on newer chipsets like Z170, Z97, X99, C602, etc.

The SM951 512GB is a bit more expensive than the XP941 512GB right now (about $0.78 per GB versus $0.70) but still comes in at about the same price as the Intel 750 400GB even though it is 112GB larger. However, the necessity of a PCI-E adapter with heatsink (due to the extremely high temperature of the controller) raises the effective cost of this drive to be closer to $0.90 per GB. This makes it between two and three times the cost of a standard SATA SSD – although when you consider the fact that you would need to RAID four or more SATA SSDs in order to get the same performance of the SM951 the price isn't actually too bad if you need a very high performance drive.

We are not going to go into too much of a detailed performance analysis because, frankly, that work has already been done for us by a number of great review sites. Tech Report, Anandtech, The SSD Review, Tweaktown, Legit Reviews, and Toms Hardware have all done extremely through performance analysis of this drive.

However, just in case something odd comes up we did run our standard harddrive benchmark – CrystalDiskMark 5.01. This benchmark was actually just recently updated to improve the accuracy of the results when benchmarking NVMe drives so it is even more accurate for these ultra fast drives than it was in the past. 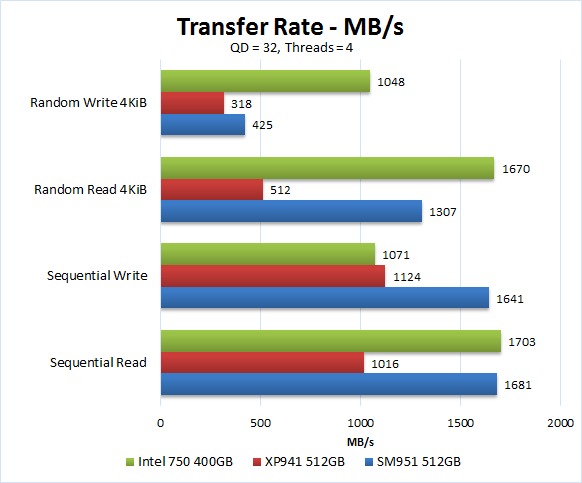 One thing we want to point out is that our results are a bit lower than what you will find on other review sites. We used the new Skylake-compatible Asus Z170-A motherboard which for some reason has been giving us a bit lower benchmarking performance for these drives than what we are used to. As far as we can tell the actual performance is identical to other motherboards, but CrystalDiskMark is simply reporting results a bit lower than we expect. 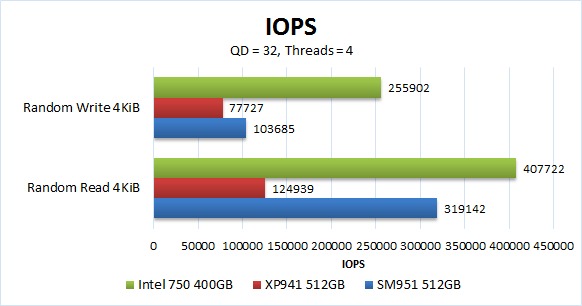 In terms of IOPS, we actually got much higher read and write IOPS than the drive is advertised to be able to achieve. They were still not as high as the Intel 750 400GB (especially in terms of random write 4KB), but it is still very respectable.

We're not going to sugarcoat it – the SM951 runs really, really hot. This is not at all unique to the SM951, however. Every single M.2 drive we have tested that runs at PCI-E x4 speeds runs as hot or even hotter than this drive. 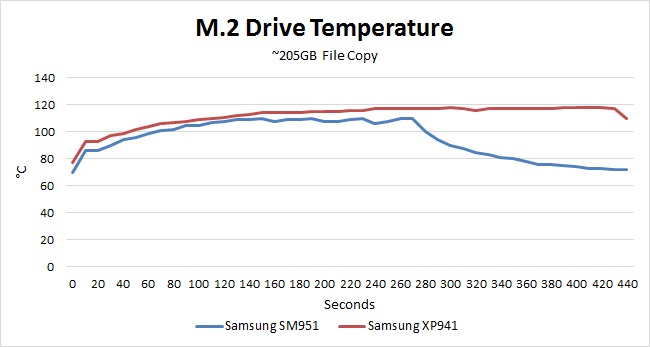 As you can see, the SM951 does run cooler than the XP941 by about 5-7 ºC, but it still reached a peak temperature of 110 ºC. This wasn't after hours of benchmarking in a closed box either. The SM951 hit 100 ºC after only about a minute and 110 ºC after only about three minutes on our open air test bench.

If you prefer a video over a chart, we also recorded a video showing exactly how hot both the SM951 and XP941 run when doing a simple file copy:

The high temperature of both these drives really make us consider them to not truly be M.2 drives, but rather PCI-E drives that are missing their mounting hardware. There will be some users who will run one of these drives naked in a M.2 slot, but in our opinion the only way to use these drives is to either combine them with a PCI-E adapter that includes a heatsink (we use this adapter ourselves) or otherwise affix a heatsink to the controller chip to help dissapate the heat. Not only is 110 ºC hot enough to impact the longevity of the drive, the fact that the drive throttles around that temperature also means that you will not get anywhere near peak performance unless you add additional cooling via a heatsink.

It is pretty obvious that the SM951 is better than the XP941. It runs a bit cooler (although not enough to make us want to use it naked) and has much higher performance. For us, the main question is how it compares to the Intel 750 drives as those are our current go-to high performance storage drives.

The Intel 750 drives are a bit more expensive than the Samsung SM951, however the necessity of using a M.2 to PCI-E adapter with a heatsink makes the price difference not as large as it first appears. Yes, you could use the SM951 without an adapter (many X99 and Z170 motherboards have M.2 slots capable of PCI-E 3.0 x4) but with how hot the SM951 runs we would not recommend it. And don't even think about putting one into a laptop unless you are fine with melting the plastic bezels around the drive.

At Puget Systems, we have made the decision to stick with the Intel 750 series as our go-to high performance PCI-E drives. The SM951 is a great drive, but the extra complexity of needing an after-market PCI-E adapter with heatsink and the lower random read/write performance just makes the Intel 750 drives slightly more attractive overall to our customers. If you need high sequential write performance, however, we absolutely would recommend the Samsung SM951… as long as you use a PCI-E adapter with a heatsink that is. 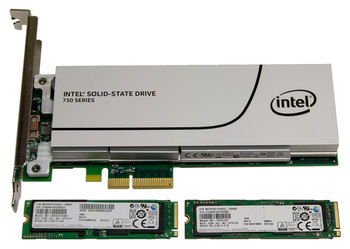